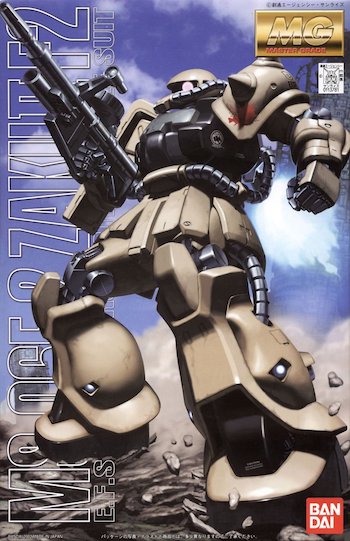 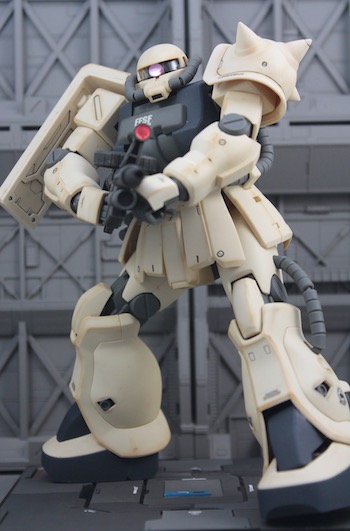 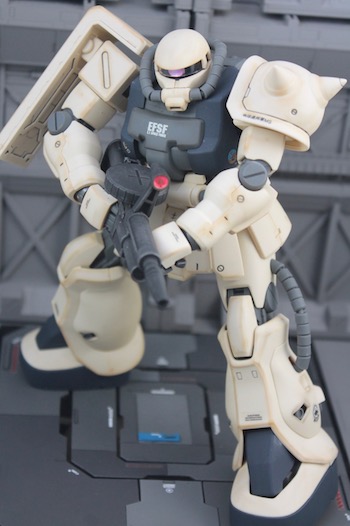 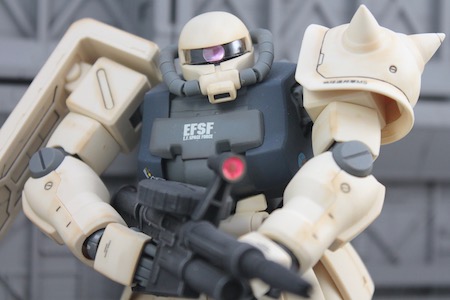 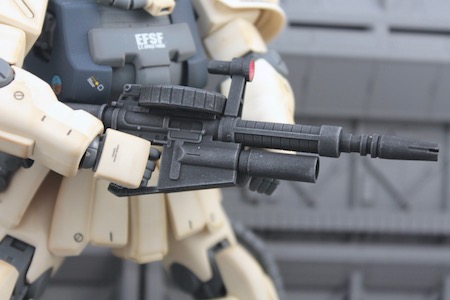 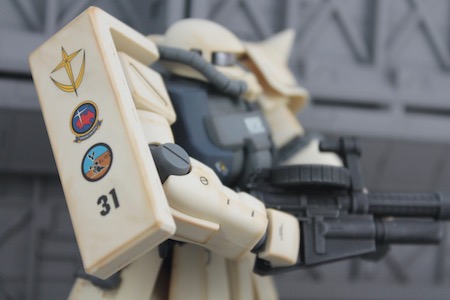 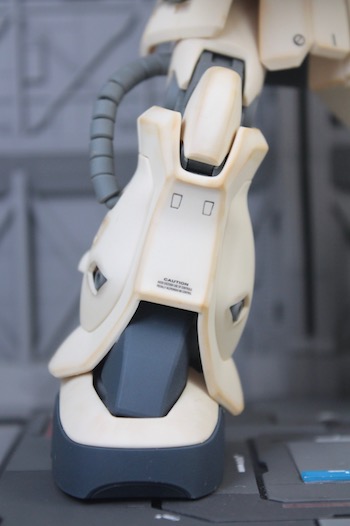 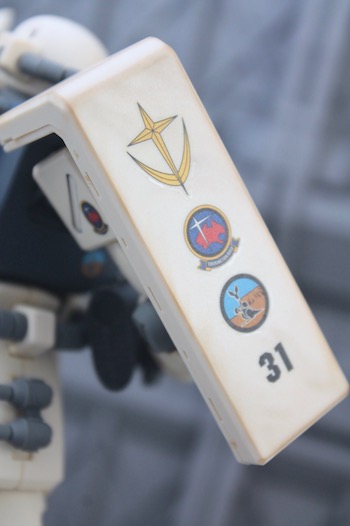 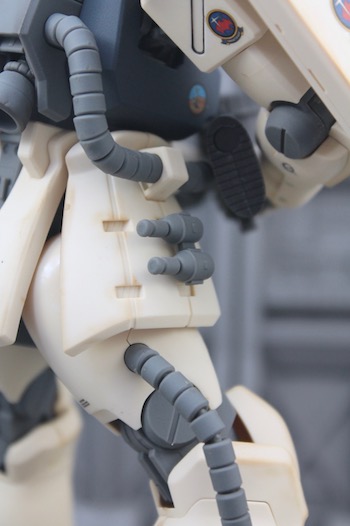 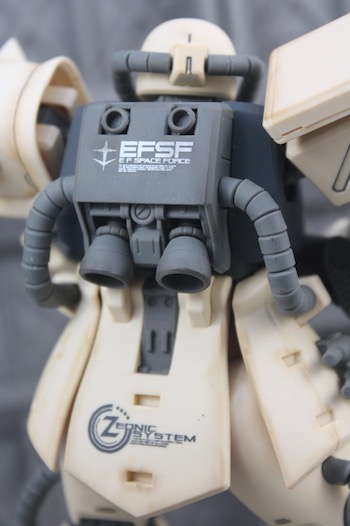 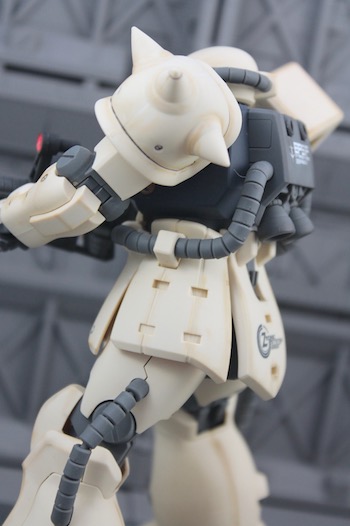 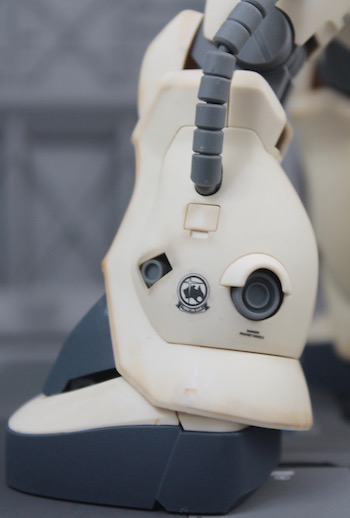 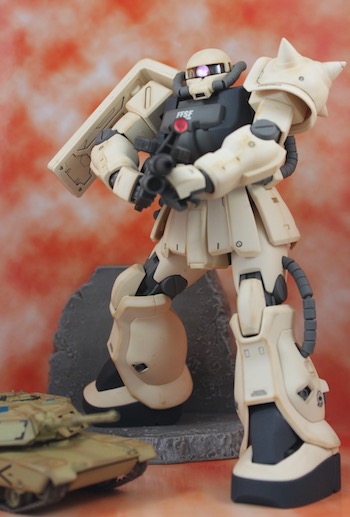 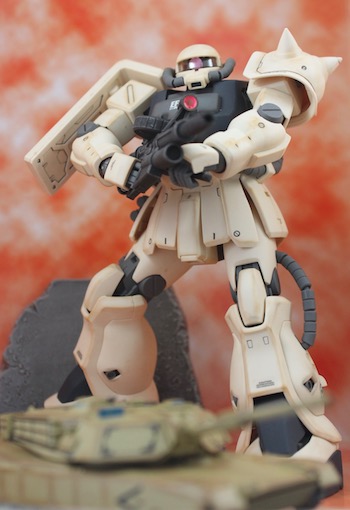 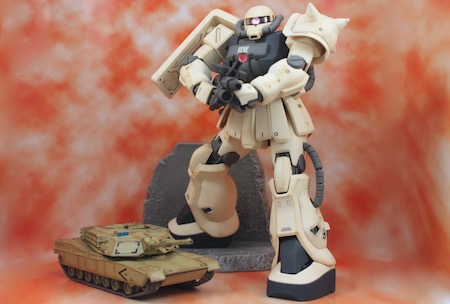 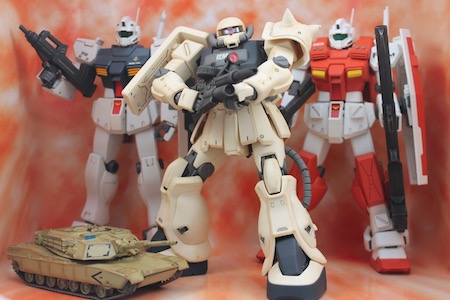 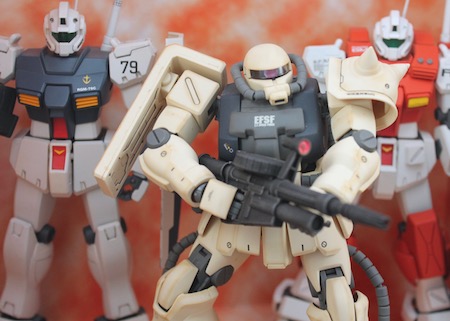 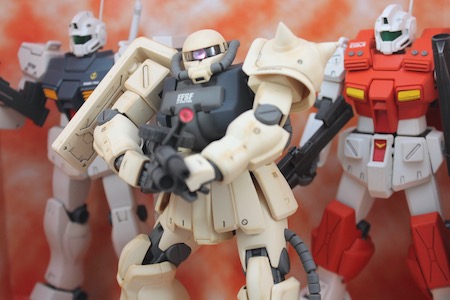 The F2 version of the Zaku II was an upgraded version produced during the One Year War as the original unit was becoming obsolete, a variant of the original MS-06F Zaku II. Introduced in the middle of the One Year War because the original F-Type Zaku II was becoming outdated with the newer, more powerful Zaku variants, and later the more efficient MS-09B Dom and MS-14A Gelgoog mobile suit lines. The overall combination of a more powerful reactor and less weight made the F2 Type a more agile and maneuverable combatant. With these upgrades, the F2 Type would also be on a more equal ground when the Earth Federation began to field their first mass production mobile suit, the RGM-79 GM.

After the end of the One Year War OYW, the captured Zaku II from Zeon were enrolled into the service of Earth Federation the this assigned to Australia as mock up enemy units during test type exercise which explained the beige desert colour scheme. It's paintball game in Gundam Gundam 0083: Stardust Memory! Uniquely to this gunpla kit is the bonus paintball splat decals to stimulate the unit been shot however it didn't use it on mine. Salvaged post-war by the EFSF for use as training mechas for their cadets, particularly for combat practice. This unit was captured by the Federation and put to use as a training unit. It was repainted in standard ground colours and one example was piloted by Chuck Keith. The training units were armed with paint rounds and the decals include the distinct red blotch like it's been hit in a paintball skirmish.. No, that big red splat on its shoulder isn't some poor hapless soul catapulted against it during the war!

This version released in 2003 has its very own modified 120mm rifle with grenade launcher, kind of like those M-203 used U.S soldiers. Although this is not a version 2.0 kit, it is more advanced than some of the earlier Zaku MG models and is a very solid kit. This version also comes with the extra armor panels for the head while the zeon version has the commander antenna﻿. What a shame, I didn't add pics of extra armor panels for the head. I had used custom convex len mono eye sticker and added extra water slide decals. The finished kit was sprayed matte and applied with brown weathering. The rifle was sprayed black and dry brushed with silver.
at December 17, 2017

What an interesting story behind this Zaku that otherwise would be another mass production unit of the Zeon faction, it not only has an unusual color scheme for a Zaku, but also an unusual task as training unit for the Earth Federation... Somehow it holds very well against the RGM-79 units in terms of design and looks more modern in my humble opinion, the rifle with grenade launcher is a rather subtle but great addition to the regular rifle and definitely I prefer these multipurpose weapons !!!... =D

>> Chrismandesign
Is a practical use of the unit after the major war. The desert colour and new rifle are very alike the U.S soldiers at Middle East. I can't agree to Zaku having a better design over RGM seems my biases are with the GM. ^_^

White Zaku II, the symbol of white power extremist within the Zeon ranks - I like it a lot!!! Zaku is always easier to build than Gundam and they often looks cute especially in pink color!!!

>> David
Glad u like it bro! Easier to build is like quantity vs quality during the OYW... Pink on Zaku would very Gundam Build Fighter lolz.. well they have tried it on Gundam Seed isn’t it ^_^