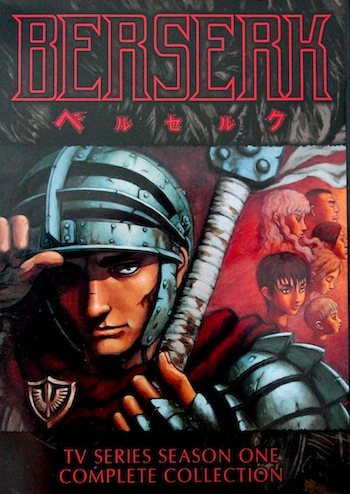 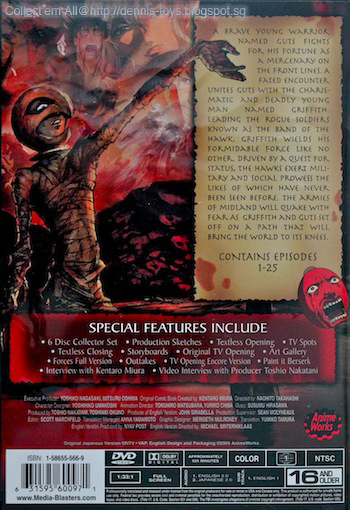 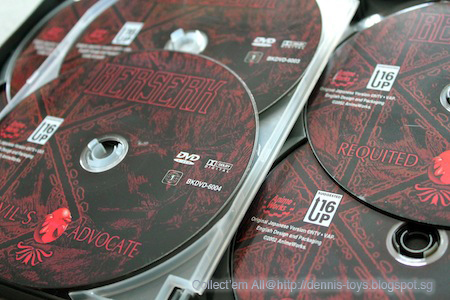 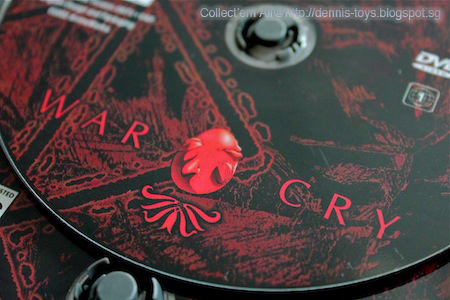 I noticed quite a few new merchandises on Berserk ベルセルクrecently, thereafter search online to  know that the anime had just celebrated its 20th anniversary with the roll out a few movies. It's seems like the movies were retelling the TV series consisting of 25 episodes, but some scenes nicely redrawn and better graphic. Then again, it's always intriguing to be hooked to those spectacular battle scenes set in medieval Europe and especially when Guts, the main character wielded his oversized board sword.

In my opinion, the initial part of the story was excellent when juvenile Guts joined the rogue army known as 'Hawk Band' with wave of difficult but successful battles glorifying the key characters. However the story kind of lost its focus when creatures from hell started appearing berserkly. The anime also ended abruptly with Hawk Leader 'Griffith, corrupted for more power, fallen from grace with betrayal. Maybe the author 'Kentarou Miura' wanted to channel fan to its manga for continuation... I’m not a fan of manga, so I didn't follow the story after the anime ended.

Now is a good time to re-watch those uncensored gruesome scenes, on my code 1 DVD box-set, which I had bought 4 years ago, on Amazon.com, dubbed in English. 6 discs collection with many special features.
at January 02, 2013

finally a series i have already seen =D... i like the series very much but the end instead of dissapointing is baffling, indeed for me it was kinda strange and disturbing, a similar feeling to that of the final chapters of Evangelion... one of the few series set in the medieval age that i like... =)

Indeed, few anime of this setting and its a good one... I really wish that the movie would at least carry on from where the tv series ended.

I remember watching some of the original series, but not all of it. I have been thinking about getting this new movie edition myself.

If you don't mind those classic drawing style the TV series would give a more detail story. I have not watched the movie yet but from the trailer, it really looks impressive. I should decide on the buy the dvd after having watched once online to see it it's worth collecting.