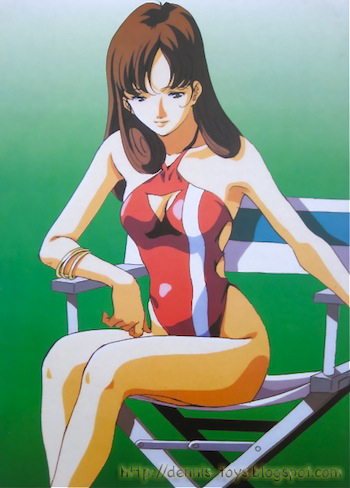 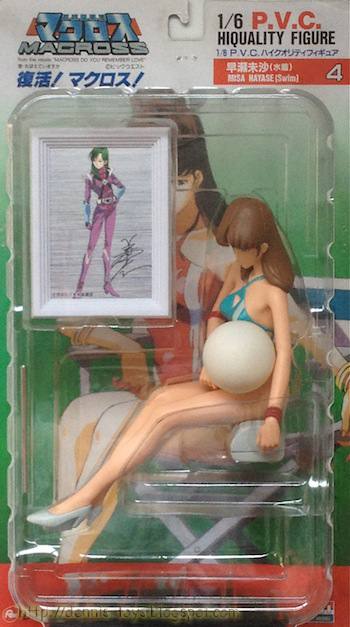 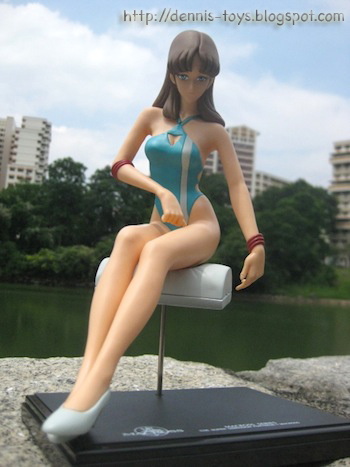 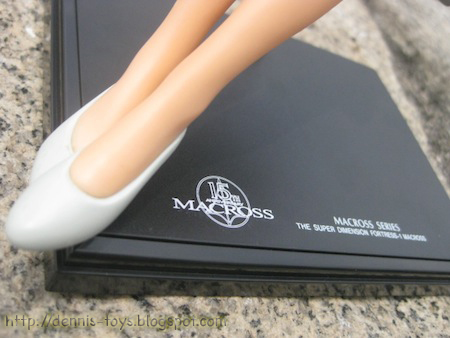 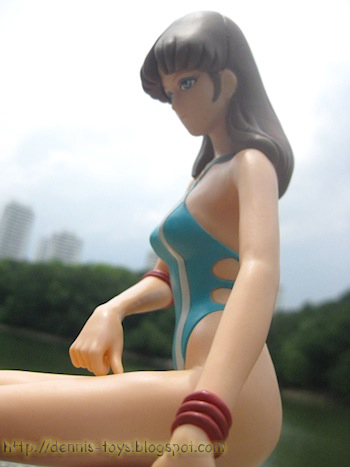 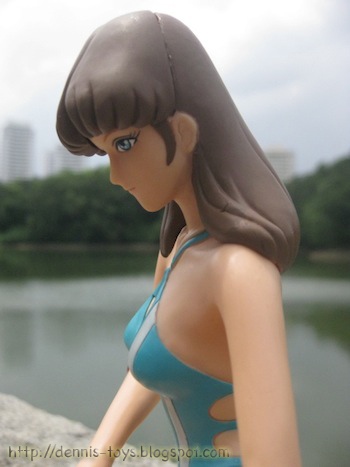 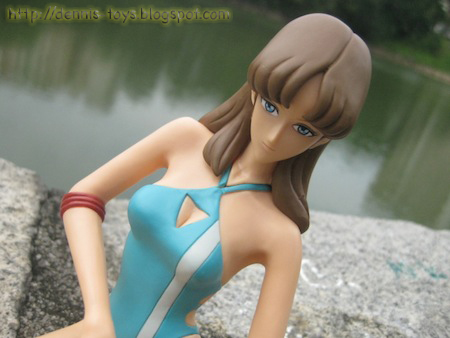 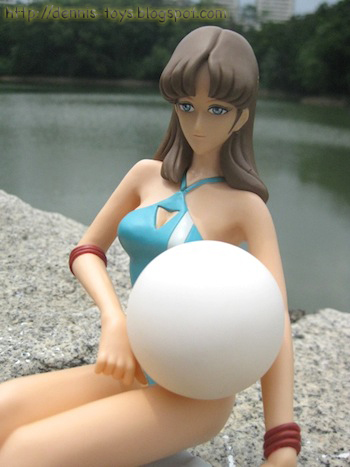 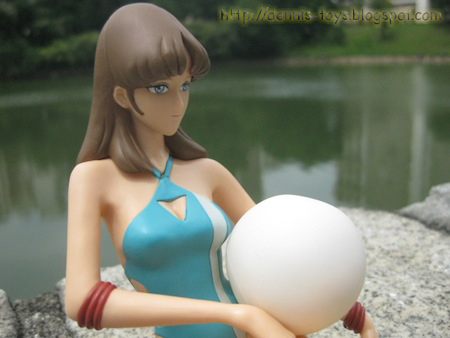 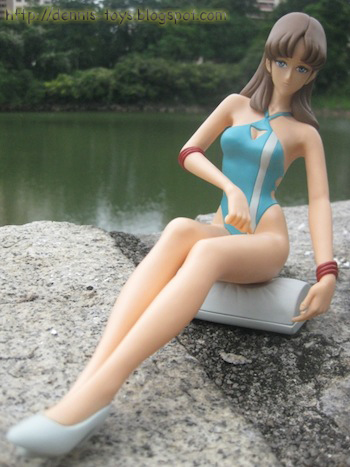 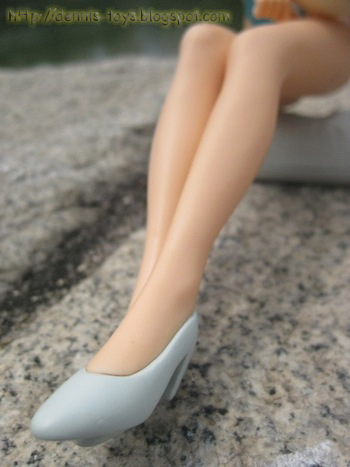 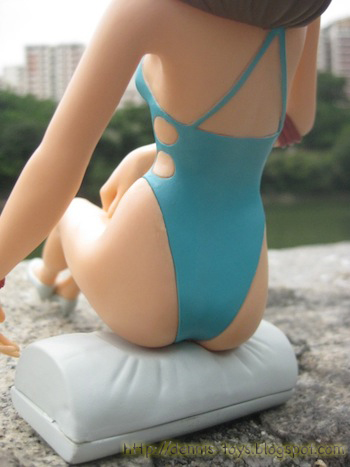 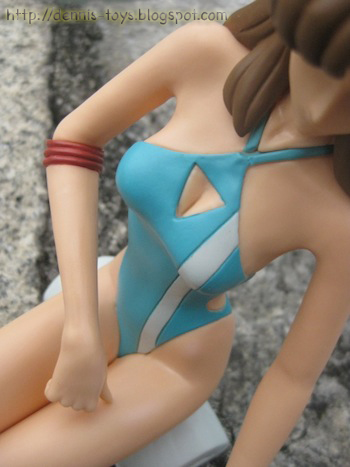 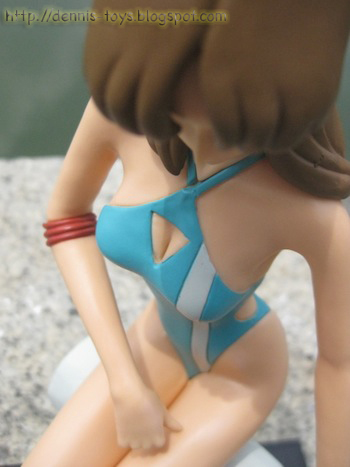 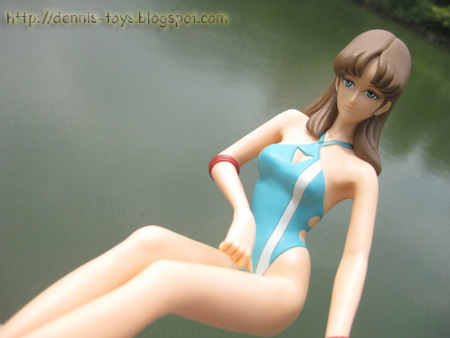 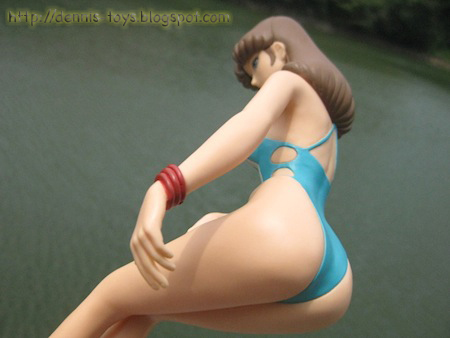 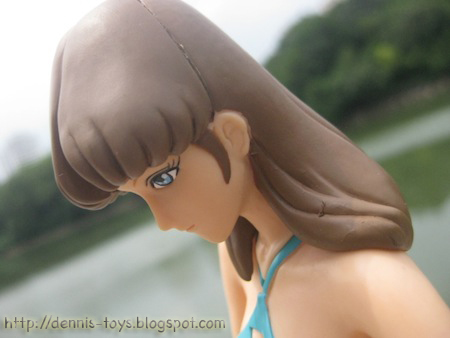 We always see Lisa Hayes in her military uniform but how often do we see the feminine side of this so-called obasan. Arii had brought out the lady in Lisa though this rare swim suit version. It also one of those figures released to commemorate the 15th Anniversary Macross series "The Super Dimension Fortress-1". It's a huge 1/6 scale (Measuring approximately 16.5" tall) Hi Quality P.V.C fixed-posed figure.

The packaging is presented in blister card and the whole thing seems huge. The figure comes with a black plastic base, metal rod that attached the cushion seat to the base. There's also a complimentary beach ball, almost the size of a ping pong ball and a picture frame that's not Misa....Hmmm... I wonder why...

The actual colour scheme to the swimsuit differed from the picture illustration on the card backing so I presumed this baby blue swimsuit is a variant piece. Misa was supposedly sitting on a beach chair but the actual toy varies. The face sculpt isn't very accurate as it didn't portray those deep sad expression of the character. There are also obvious seam lines on the hair if you noticed from the pics. But I don't really mind such flaws taking into consideration the era of its production.

I personally find it awkward to see Misa wearing elbow and wrist bangles. But the greatest mismatch is still the high-heels. This is perhaps a fashion statement during the early eighties.
at April 11, 2012

GREAT FIND as I can't seem to find anything here like that.

The bangles are odd, but I guess the accessories add a bit to the figure.

This figure shouldn't be to hard to find as compared to the uniform version. I had it imported from Japan but could find some selling on eBay. Just that those on eBay ain't so right in terms of pricing.

omg, very attractive misa in swimsuit~! my gf would say i'm ecchi if i had one of these...

Ha! Ha! Ecchi runs in my blood and my mum shook her head she saw my female figurines on display. Maybe it's too much for her to stomach.

Not at all bro! The material is close to vinyl. For heavy figures, you gotten go for resin, but they mostly requires painting.

HUGE !!! from the card you could think is a 6"/7" figure, unless you read the "1/6 scale" info... the sculpt is very neat, also the paint job and that’s great in an old item like this... even the skin color is intact (and usually is the first that turns into darker/tanned)... the character in the picture frame reminds me pretty much one of the female characters of Evangelion series in her suit... uhmmmm another sexy girl in the panorama =OOOOO =)

Indeed a huge figure and the blister card packaging ain't so suitable in this case. You can say that the quality is extremely good looking at how well the figure had been preserved all these years. The drawing in the frame is Millia in her flight suit when she's still with the female Zentrandi squadron. I'm most likely to sell this figure off but will keep another of Misa Hayese figure in her U.N Spacy uniform. Will blog about that in future. Thanx for all the support all this well pal... Appreciate that...

There are red and yellow misa swimsuit figures too maybe more.