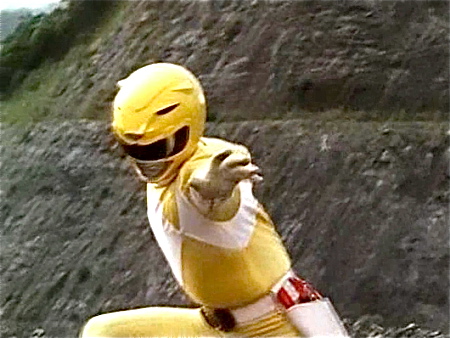 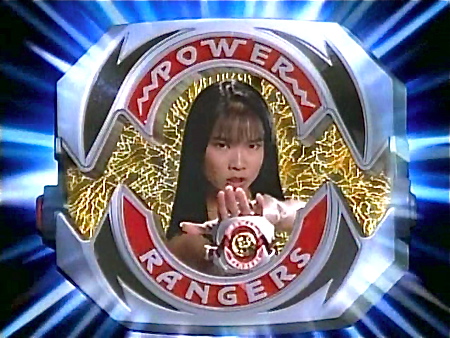 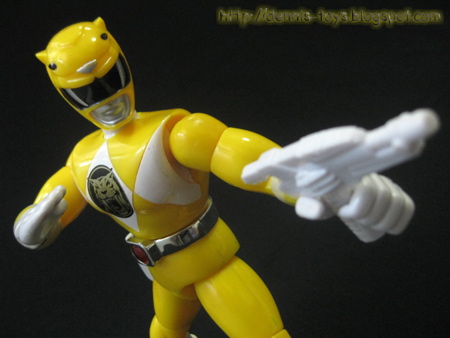 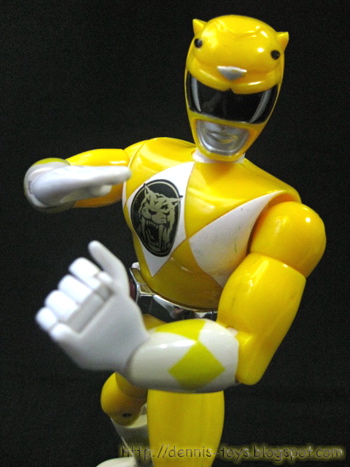 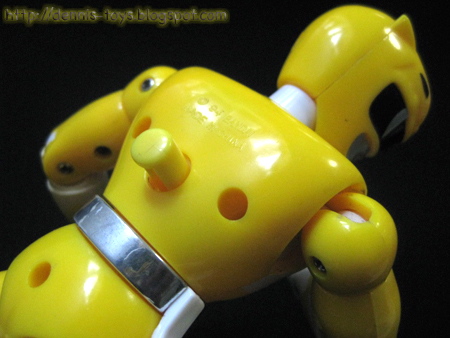 If you asked me about Mighty Morphin Power Rangers, my deepest impression definitely is the very first English season where the zords were in the form of prehistoric creatures. There were so more of excitements then watching each episode shown weekly anticipating the rangers saying "It's Morphin time" and them calling out their zords. The Yellow Ranger was first played by Thuy Trang as Trini Kwan. It's sad to know that this Vietnam-born-artress had passed away at the age of 27 during a car accident in year 2001.


Came across this Yellow Ranger action figure while I was trying to get the Green Ranger. In the process, I also bought this as well more for it's pricing. Produced by Bandai in 1994, this figure stands around 10" and has got a button on its back. Upon pressing the button, Yellow Ranger would start her karate chops. The condition of the toy isn't in its excellent state as the white portion on the limbs are showing signs of yellowing.
at September 27, 2011

Whoa, didn't know that she had passed away. Sad to hear.

i must say i never expected u to collect something from the Power Rangers (& i feel a kind of hatred for this series but love a few of the figures available)... despite the above, i find this figure quite interesting, specially the construction in resin, the nice chrome stamped... i like this vintage surprise =)

Awesome! MMPR is probably my favourite Power Ranger series, I liked it as a child so it is nostalgic for me. But I haven't really fallen for the recent Sentai Power Rangers yet, the stories are just too repetitive lol!

>> LEon
Just a few bro to remind me that I'm once grown up during that era.

>> sl619
Sorry to hear that. Well, it's common that as kid, we had once played our toys intensely to a point we broke them.

>> Gundam Gunso
I was surprised by the news as well when I made the search online to find out more about yellow rangers. R.I.P

>> chrismandesign
MMPR was really a big thing then that the movie went big screen and I watched it in cinema. It's good to surprise the readers once in a while for the refreshing feel. Hee! Hee!

>> Jcee
Indeed, the first Power Rangers TV series is most epic. It was something innovative then and going on and on kind of lost and appeal over time. I saw your recent purchase of Megazord and Red Ranger. I was tempted after that.

whhooaa it is a little surprised that everyone here watched the same old school ranger :D
I really love this too back then, but I didn't know that she was passed away..

Never got into the Power Rangers myself, but my son watches them.

Why does the figure look more like a guy than a girl? Even in the show it is that way - oh yea, 'girls can't fight' so they had a stunt guy.

Now I opened a can of worms with that one :)

>> RiP666
I wasn't expecting so many comments on this post actually and man, this stunning to know that most of you guys like the first MMPR.

>> bluedrakon
Yup, I noticed that too! Observation fro the chest area. Ha! Ha!

OMG. I didn't know that the actress playng the yellow ranger had passed away...

I am now an avid collector of S.H.Figuarts currently planning to collect all the Gokaiger! =)

Sad news isn't it. So you have found a new interest. Hee! Hee! Go Gokaiger!