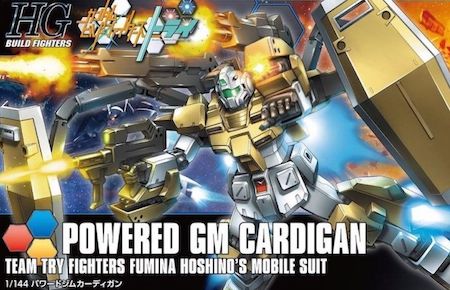 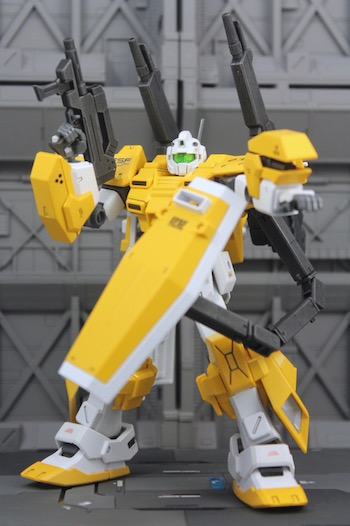 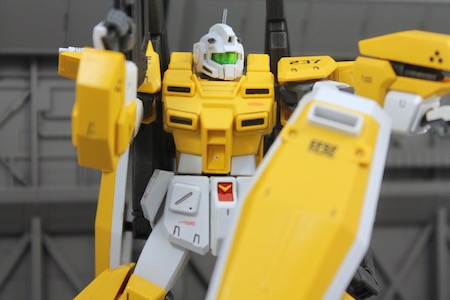 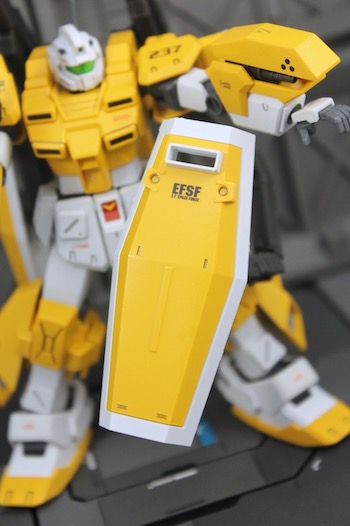 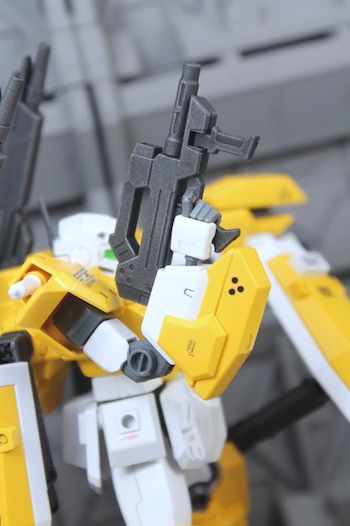 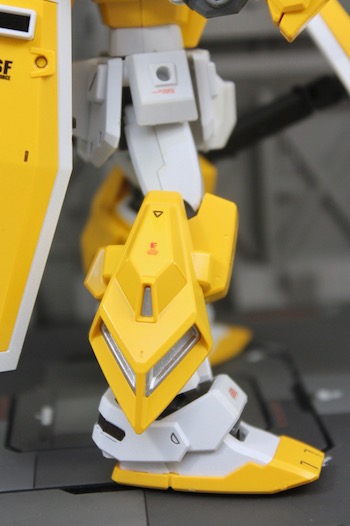 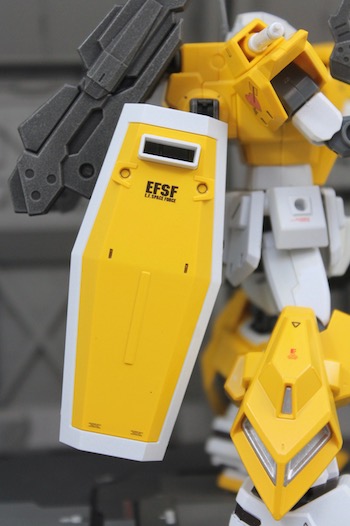 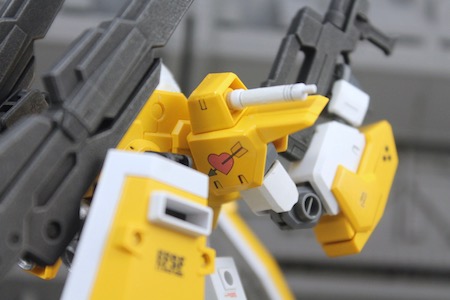 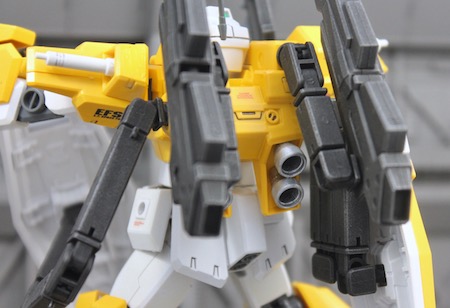 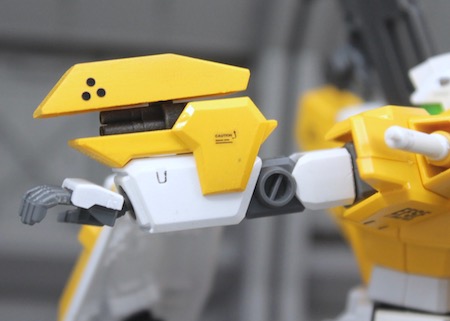 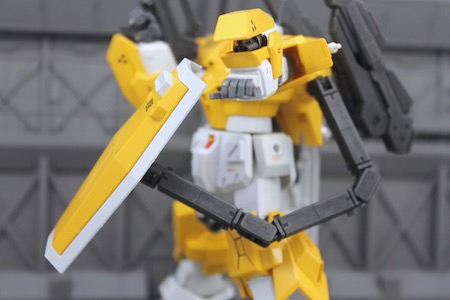 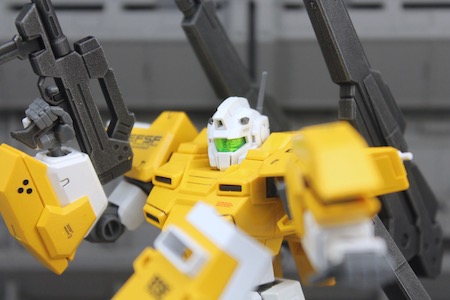 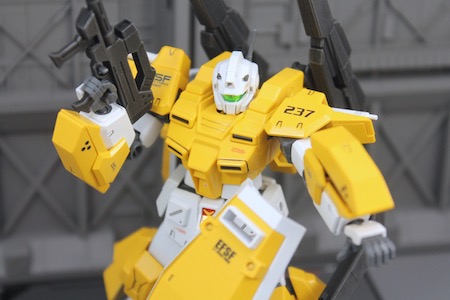 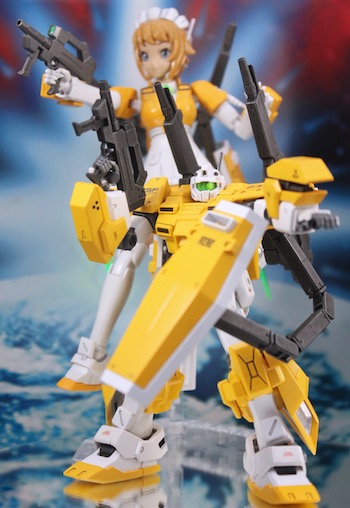 A sneak purview to Super Fumina @ the rear

The Powered GM Cardigan is a Mobile Suit that appears in 'Gundam Build Fighters Try'. It is piloted by Fumina Hoshino, based on the RGM-79C Powered GM from Mobile Suit Gundam 0083: Stardust Memory introduced in Build Fighters in 1/144 (5" tall) scale High Grade Gunpla with awesome bulky look yet not compromising the articulation with a whole new layout for the familiar GM whole new backpack, shoulder, arm, leg parts. Adopting new wider shoulder rotation range and arm joints that actually pull the forearm all the way towards the bicep.

Cool Gatling gun concealed in arm, there isn't a hinged mechanism though. you remove the "top" piece of the gatling gun port and set it slightly further back onto a peg. Its pretty secure and looks great on display. The Shield connected to modified backpack with various attachment points for a variety of customization options, just like those HG Thunderbolt GM, and is repositionable using sub-arm. Armaments include 2 shields, cannons, beam sabers and rifle. Three optional hands, two for holding weapon, third come uniquely with joint at the wrist, allowing the hand to bend adding more hand posing.

I actually stopped building 1/144 scale Gunpla but my passion for GMs plus Fumina Hoshino's spectacular yellow grunt unit enticed me for another comeback. Not only so, I put in an extra effort for fully painted the kit choosing a more striking yellow colour. As you can see, apart from those smaller water-slide decals, I have also added a arrow piercing heart decal for a more feminine touch,  after all its manned for female pilot. The optic lens was painted silver so the it looks really cool and prominent through the green translucent visor.

The reason for adding the number "237" on the left shoulder pad is because every Gunpla Fumina Hoshino has built includes "237" can be read in Japanese as "Fumina" ("2": "Fu", "3": "Mi", "7": "Na-na"). Goes to show I pay extra attention to the details of my favourite character in 'Gundam Build Fighters Try'. Lolz... The side arms, cannons and rifle have been spray black plus dry brushing treatment. Excellent fun build and overall, surprisingly great kit!
at January 10, 2018

With this Building Fighter Series, somehow the Gundam franchise was revamped and made closer to younger audiences, but also capturing the attention of adult collectors, with new and more powerful versions of classic mobile suits, which I guess is the case with this model kit, based on the visor grunt units you love... The extra armament gives this RGM a new profile and the bright color scheme changes also its feeling as a whole, albeit the additional articulated arms that include the backpack look kind of weird, specially with the shield attached, but I guess it makes sense in the series... =D

Bro, very striking yellow for the figure..I thought gold is its original color?

>> Chrismandesign
The weird backpack is new break through in design in this series before it’s widely used even the idea is adopted in Bandai’s ‘Knight and Magic’ mecha. I like the unit mainly for the grunt look with new attachments. It’s kind of the reason I continued with the Gunpla series..

>> Desmond
The original yellow is the pale yellow and I chose this strike yellow out of my own preference.

I think this Jimmy is quite pretty, the yellow color is very nice - I simply love this one!!! now I'm considering to get it next time...

>> David
I didn’t know this mecha has a nick “Jimmy” lolz sounds like a really cool dude! Good considering factors there...