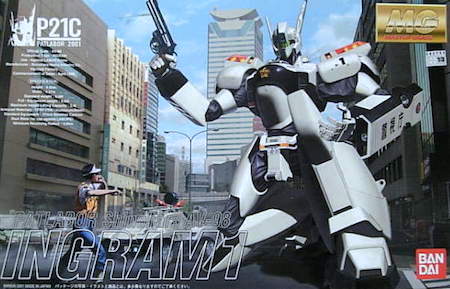 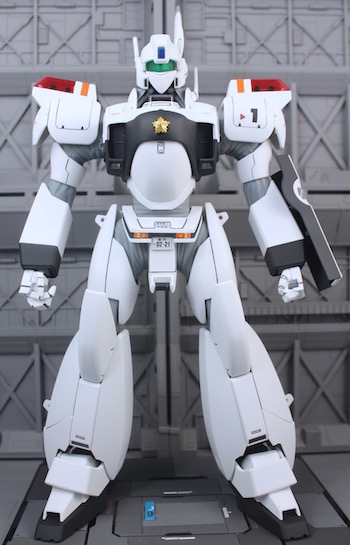 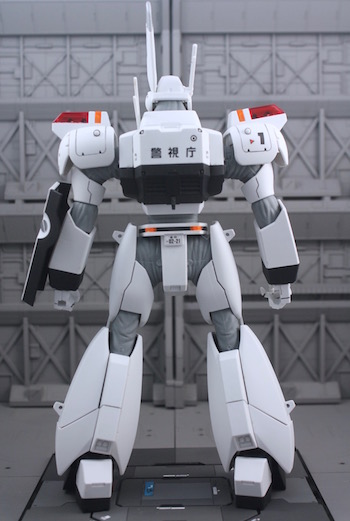 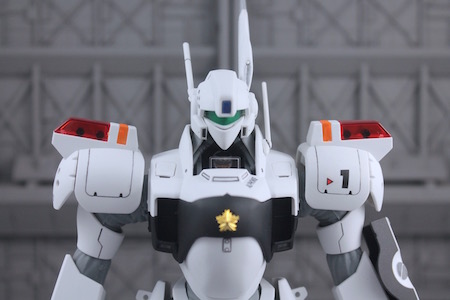 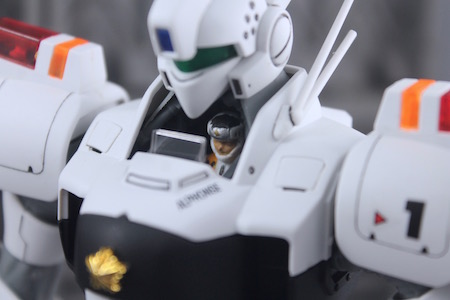 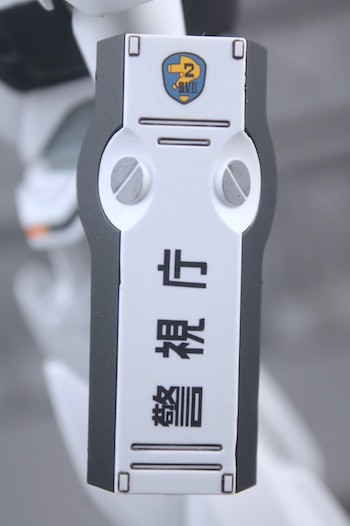 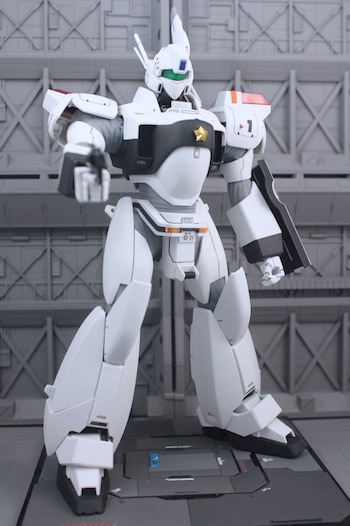 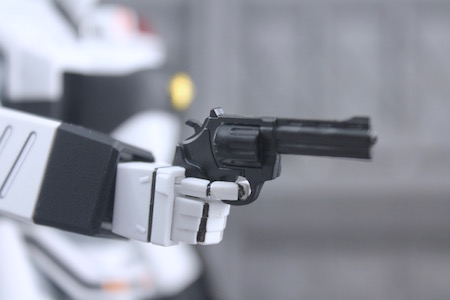 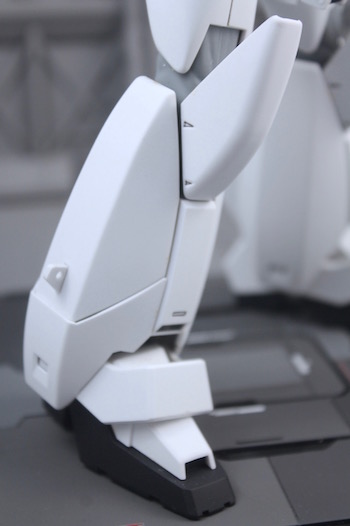 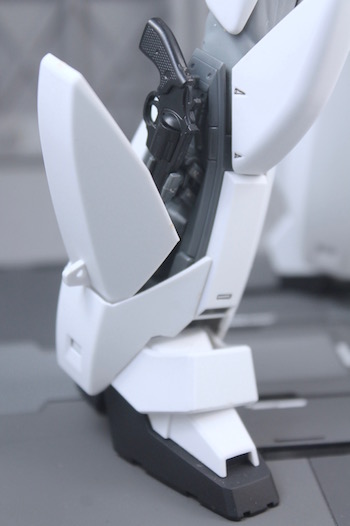 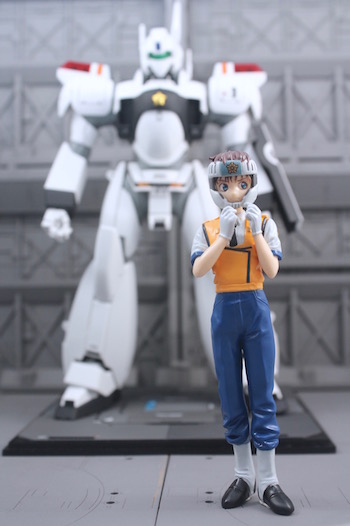 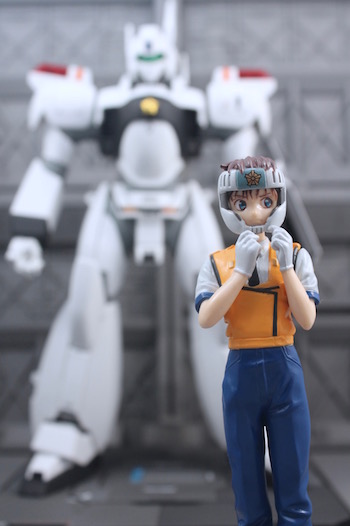 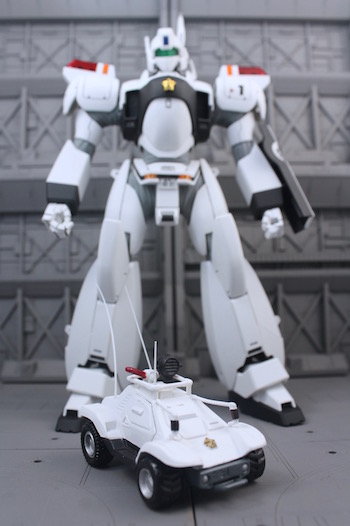 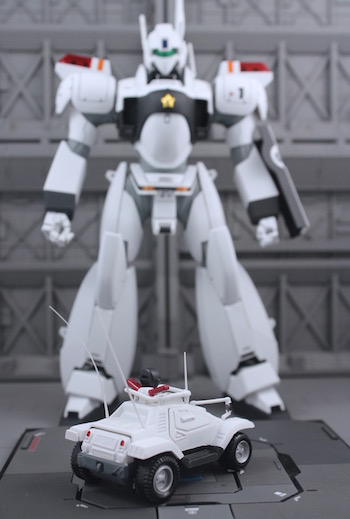 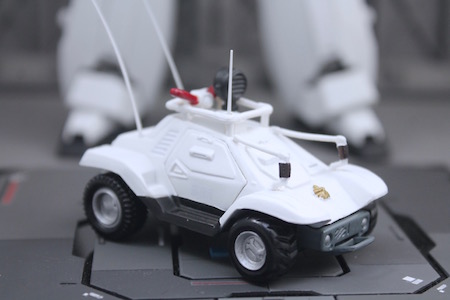 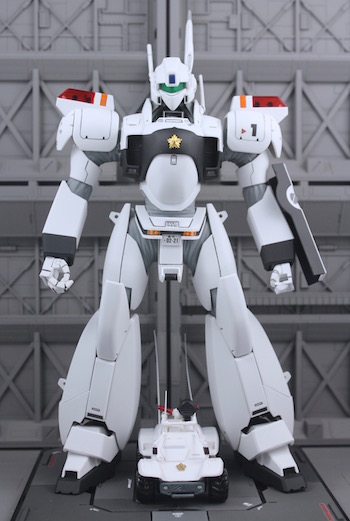 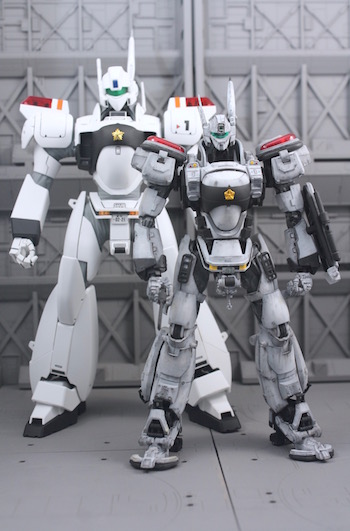 Freeze! You have the rights to remain silent! Anything you say may be used against you in a court of law cos Noa Izumi is here with her MG Patlabor Ingram 1! Without doubt from one of my favourite mecha anime for its humor and actions. My love for Ingram 1 is irreplaceable and naturally I like Jegan from Gundam series as well since both visor type mecha were designed by Yutaka Izubuchi.

Patlabor plot was set in the near future of Japan where enforcement mechanized robot aka labor were added to Police assets to deter act by criminals/terrorists using industrial or private labors. The newly roll out Ingram 1 was assigned to Tokyo Metropolitan Police Special Vehicle Section 2, Division 2. You can see the division's insignia on Ingram's shield. Ingram also bear the chrome Sakura emblem on the chest which symbolizes the authority Japan Police.

Even though this model kit was released more than a decade ago back in 2001, Bandai managed to deliver a highly accurate Patlabor Ingram in terms of mechanic and proportionality. Equivalent to the standard of Gundam Master Grade kits, this 1/35 scale Ingram stands around the height of 1/100 scale Gundam or slightly taller. This kit managed to gimmick the mechanics from the anime such as cockpit with lifting chest armor to put in the pilot figurine. I had hand painted the pilot figurine to realism to the model kit. The kit comes with weapons like unextended baton that can be mounted to the under side of shield, the extended baton and the revolver.

The most interesting part was that the revolver actually can stored in the right leg and as soon as you open the leg cover, the lever lifted up the revolver. The inner forearm can be extended too to reach the revolver while Ingram was standing. How cool was that! There are three sets of interchangeable hands for different poses and weapons. I didn't fully paint my kit. Only some minor touch up with panel lining before a final matte top coat. I'm using CMS Noa Izumi figure and Command Car as props for this post.

I have not seen a single episode of this anime series yet and I already love Patlabor, HEHEHE... It must be the fact that I got a Patlabor Griffon - Aqua Unit a long time ago and obviously it’s still part of my collection because I like it very much; I mean, it has a mecha design that is incredibly good !!!... I know you will prefer the original AV-98 Ingram and certainly the MG kit is a great rendition, but in the last picture the New Generation Ingram has an extra dose of badassness that tips the scale in its favor, in my humble opinion !!!... =OOOOO

>> Chrismandesign
There will be a series of Patlabor postings coming up. One of which would really be Griffon Aqua unit, which you are familiar with. Maybe the new generation does look better lolz.. I just need more time to get accustomed to it. You know the original first impression last a long time : )

Yeah bro! Like the MG series because of the size and the gimmicks : )

Patlabor is one of my favorite series as well and collecting all of the three Ingrams really worth it! That CMS figurine really complement Ingram very well. Someday i might even consider getting another copy of Ingram MG just to paint it in CLAT color scheme

>> Yami
We shared a lot in common on mecha especially on this series. After having this on display, I decided to sell of my CMS version. The CLAT colour scheme would be nice and hopefully Bandai would consider CLAT version as Patlabor anniversary exclusive. Just a suggestion lolz. I only have CLAT version for Yamato version which I have yet to unbox after so many years. Saw your previous posts on this MG series and find them really inspiring : )

If the robot wants to take out the gun, it needs to knee down everytime, right?

>> Desmond
No bro, the forearm can extend to reach the revolver.

Pat Labor - isn't it Toyota Trueno AE86 in police car form or so I imagine due to the color scheme hahahahaha.... I love Pat Labor figure, I only have one from Revoltech many years ago...

eToro is the ultimate forex broker for new and full-time traders.