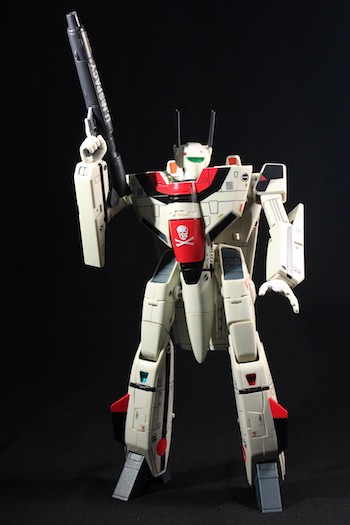 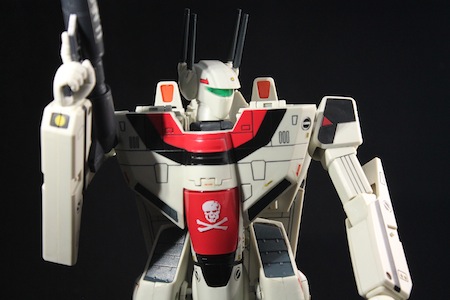 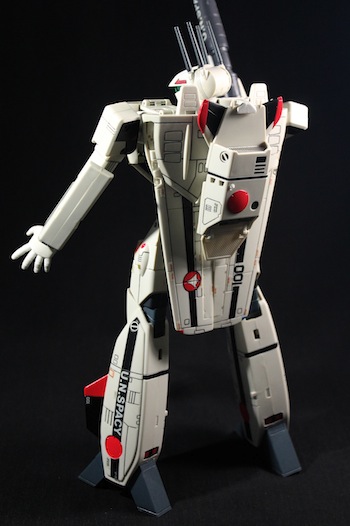 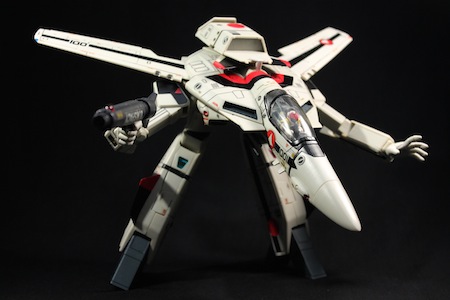 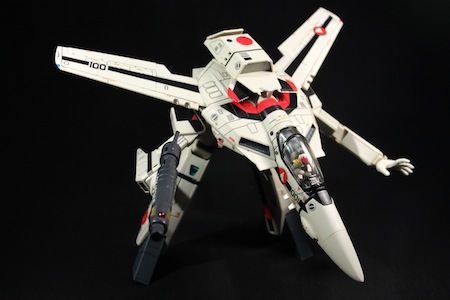 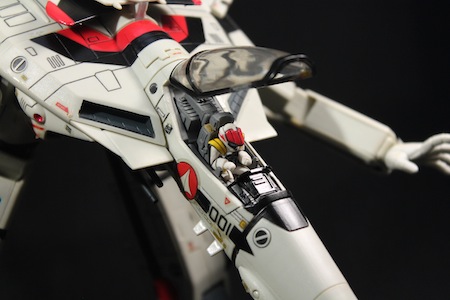 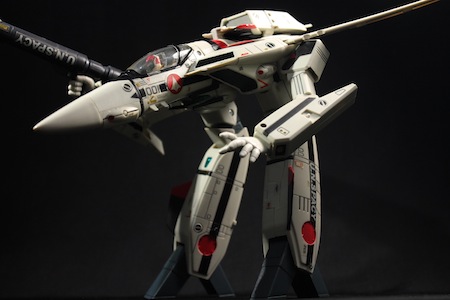 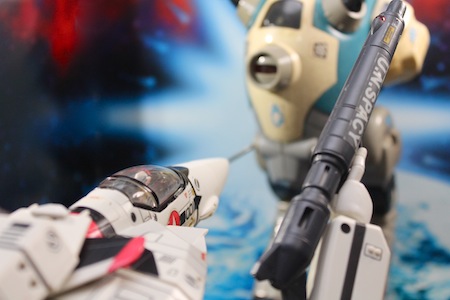 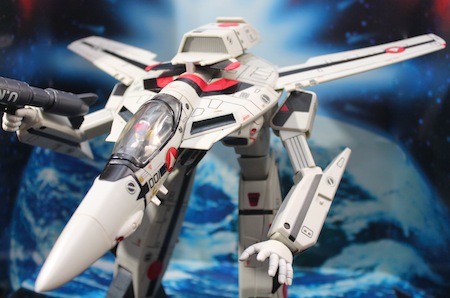 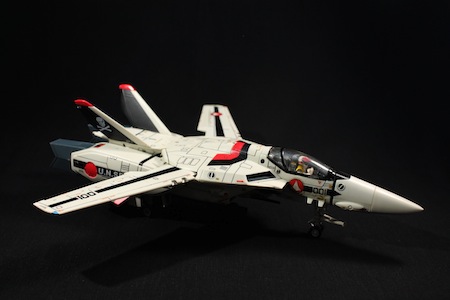 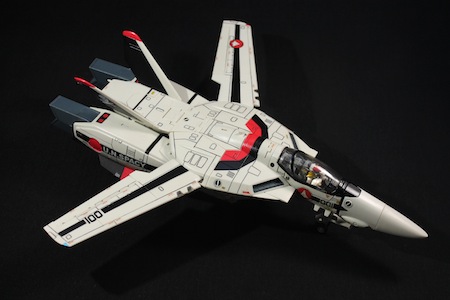 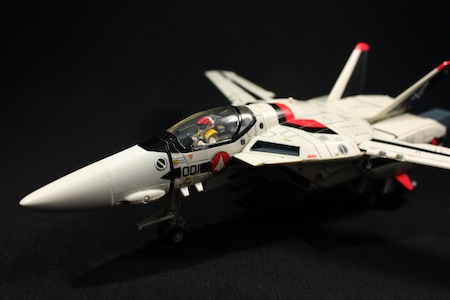 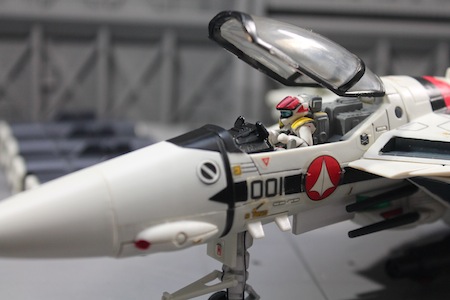 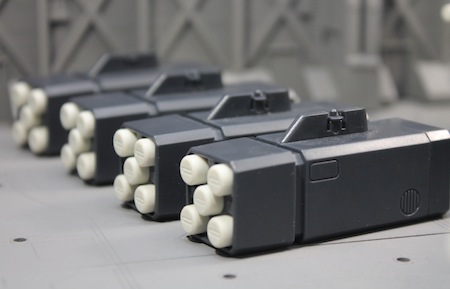 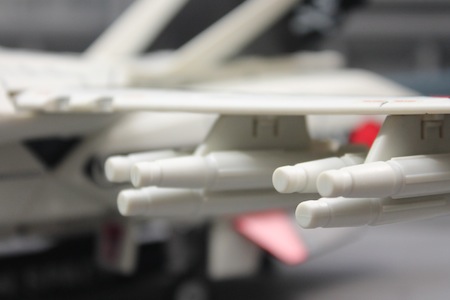 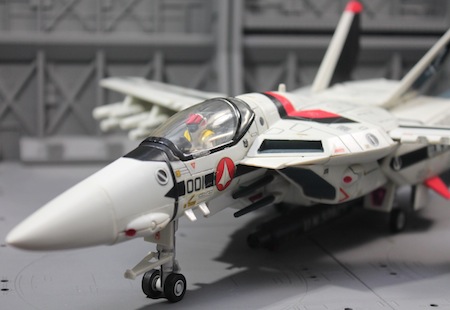 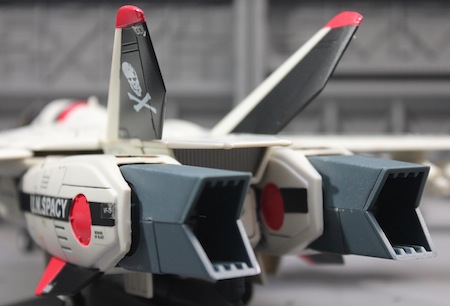 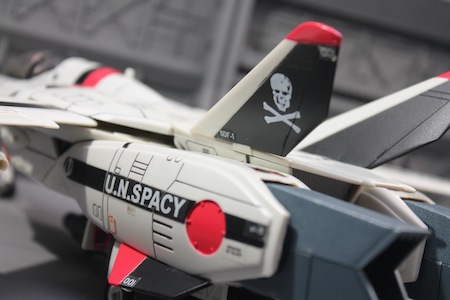 Do you still remember the legacy of Yamato back then with breakthrough proportion, precision and perfect transformation. The beauty of valkyrie inspired by the design of F-14 Tomcat. The white, red and black colored valkyrie is iconic and exclusive to Hikaru Ichijo, when he took over as Skull Leader 1 in Macross Movie 'Do You Remember Love?'. Mine is not exactly white but off grey with slight signs of yellow tarnishes. I probably will spray a layer of top coat to slow down the yellowing process. Anyway, I had applied he stickers and drawn the panel lines with black marker.

Without doubt, a highly popular choice in the series and by far the 1/48 scale is probably the biggest transformable, mass produced valkyrie. I happened to like bigger toy and this 30cm toy looked magnificent on display. This immense scale allowed a more detailed cockpit with removable pilot figure and opening cockpit hatch. Some realistic gimmicks included removable nose cone revealing advanced radar and air brake opening movable, antenna reproduce nose wing flaps. Accessories included optional missiles and gun-pods. I find the origin pair of fists a bit too bony, so I had bought this special rifle grappling fist and opened fist for more accuracy to the anime appearance in battroid mode.
at December 05, 2015

Email ThisBlogThis!Share to TwitterShare to FacebookShare to Pinterest
Labels: Macross 1/48

Uhmmm... I don’t remember love ;(... But i do remember a few OVAs, if that counts =P LOL... Also, i have always admired these awesome transformable PVC Macross collectibles by Yamato !!!... Those were great times and even today, these collectibles stand out the crowd of high-end and higher-priced items you can get (if you have an oil well or an account in Cayman Islands)... Unforgettable color scheme, albeit vulnerable to light (as any other white toy) and a privilege for any collector !!!... Nice pictures, pal !!! =D

>> Chrismandesign
It's better to love and lost it rather to not love at all. Lolz ... I'm pretty sure this VF-1S is favorite to Macross fans or at least second best! Especially for those who fell in love with Macross during the movie saga. Thank you for the pics' compliment pal! Always feels good to be appreciated ^_^

Big is beautiful, lol!
Size does matter, but i prefer petite, hahaha!

So Jelly with your Yamato collections lol Dennis, personally they are easily some of the best lineup for Macross. Though i still prefer collecting the transformable plamo series as i prefer 1/72 instead 1/60 for the series.

btw are you getting any of those Arcadia lineups?

Wah bro, your photos with black background is very nice, do you use a black cloth?

>> Andy Ng
I recently bought the petite too for novelty. It's the Hi-Metal grade by Bandai.

>> Yami
I do have a couple of those 1/72 Macross kit, unfortunately non was done by me since I sucks when it come to Macross model kits. I still keep a few 1/60 scale Yamato made but they are from the version 1.0 released. Arcadia Macross toys are incredible however they are mostly out of my budget these days.