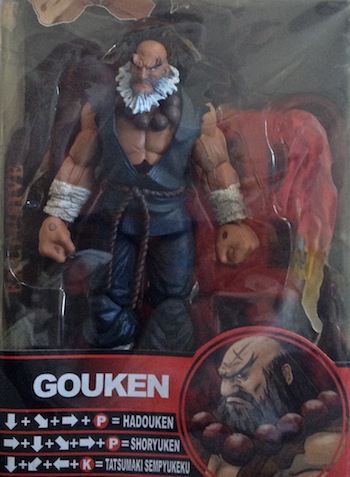 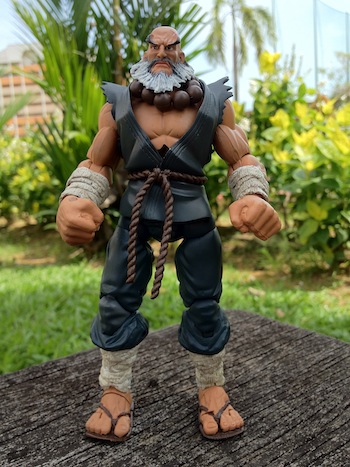 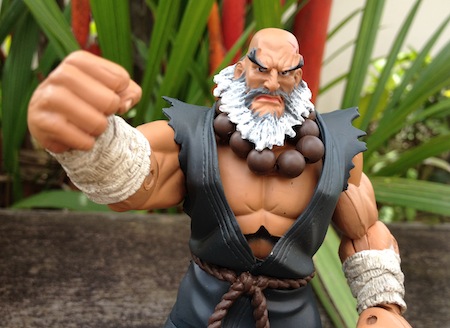 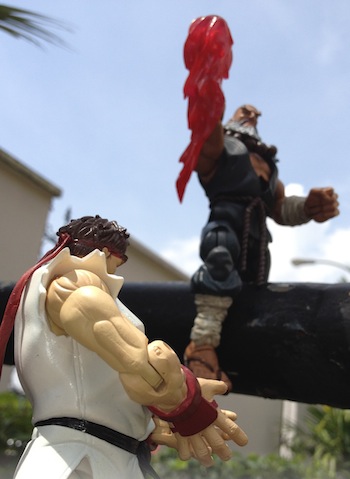 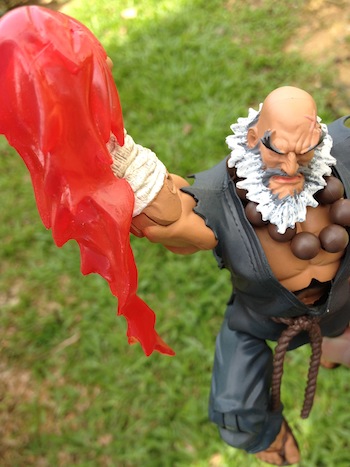 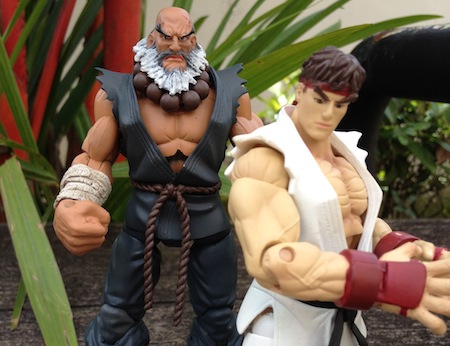 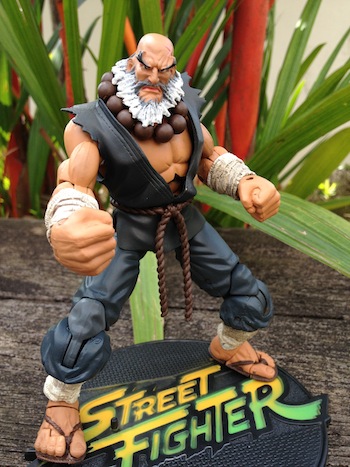 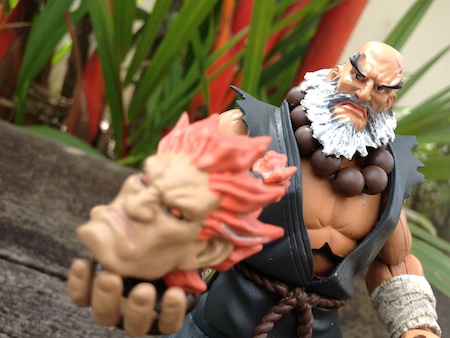 SOTA action figure of Street Fighter is always my preferred choice and today's featured toy would be an 8" Gouken produced in 2006. Better known as the master of Ryu and Ken, Gouken imparted his skills of Hadouken, Shoryuken and Tatsumaki Sempyukeyu. Sculpt of this Gouken figure resembled more of how he appeared as in Street Fighter Alpha, a non player character at that time, more as a background character.

There's actually 2 versions released by SOTA. Mine of the normal version and another is the Battle-cry version. The difference are the head sculpt. Pretty decent sculpt in my opinion and articulation for basic stunts. Unfortunately, it has no extra hands apart from the clenched fists. Well, you can still swap hands of other SOTA action figure like what I had done. The only gimmick is the effect part that can be attached to the hand demonstrating flaming Shoryuken.
at August 25, 2013

no idea about this character, but the custome and specially the huge collar remind me Gouki (whose head is shown in the last picture)... is Gouki the evil version of this old Gouken ???...

there is a nice work on the finishing of this figure, the paint job is very welcome, the figures nowadays tends to use only the color of the plastic resin (which is not always accurate and looks off), also the proportion is better than in the recent and more expensive figures by Square Enix (Play Arts Kai line)... the old school figures have always their own charm !!!... =)

I think the oversized hands really add to these figures. Very nice detail and the articulation looks good for a log of posing.

Nice action figure, i like the Shoryuken effect :D

>> David John Shewsbury
Gouken is a character that was briefing introduced as master to Ken and Ryu. He was 6 foot under in Street Fighter 2. Creates that epic fight btw Ryu and Akuma.

>> chrismandesign
Sigh... Guess Gouken is pretty much a low key in the arcade. Well, he did made some appearances in the anime.

Probably it's personal but I'm attracted by SOTA more in terms of SF figures. Maybe they are closer to anime form which is very 2D like characters in SF Alpha/Zero.

Gouki aka Akuma, correct me if I'm wrong are from the same clan or martial art school with Gouken. Gouki was engulf by evil and murder Gouken

>> bluedrakon
Big fist for strong punch ... ^_^ ... Yup, I sure the details and posabilities right to the toe joints! Cheers!

>> Om3ga062012
Hee! Hee! I was resting figure on a rod and the other shot with the hands holding it. I luv Shoryuken move!