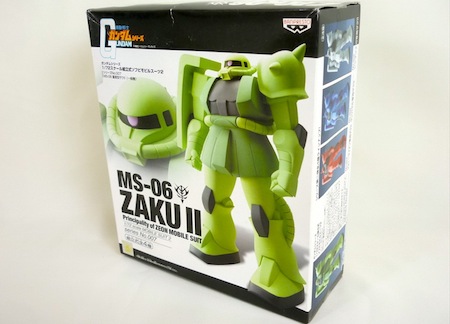 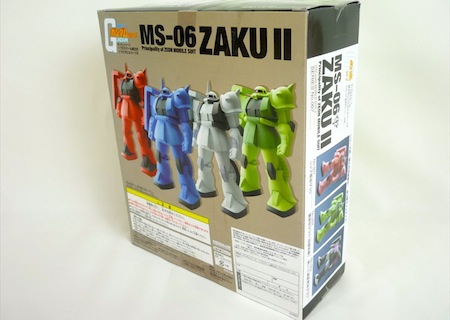 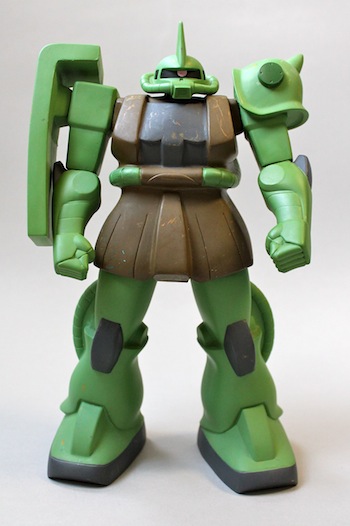 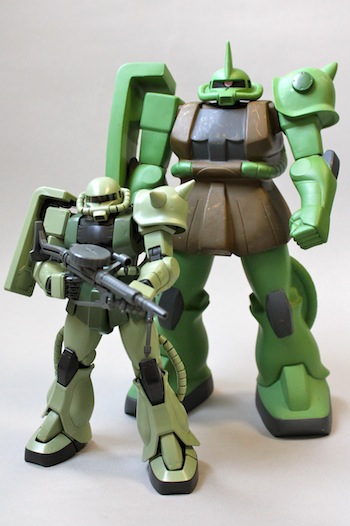 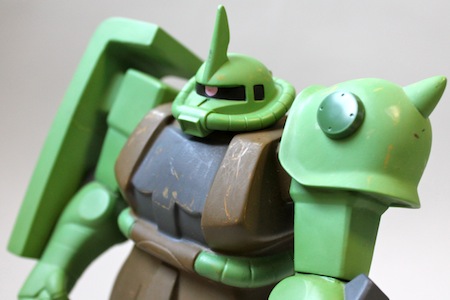 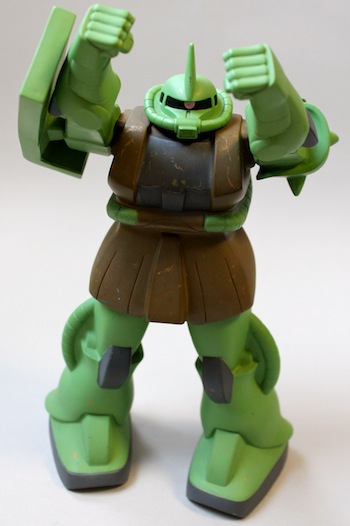 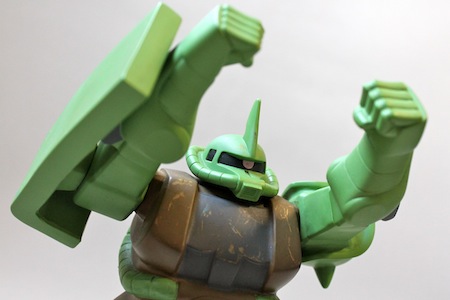 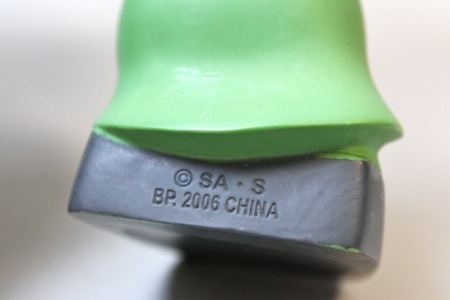 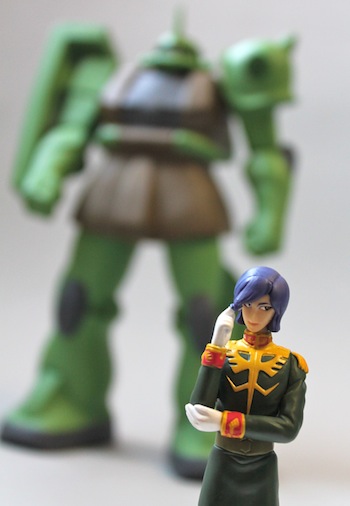 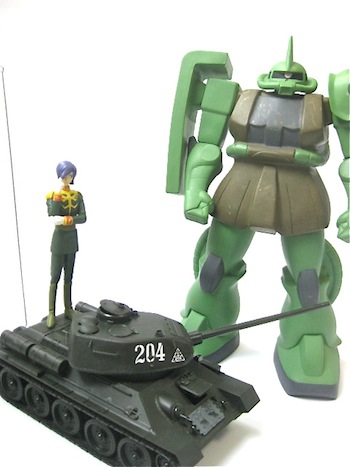 If you wonder what this chunk of green stuff is, it's obviously not Incredible Hulk but Banpresto's version of MS-06 Zaku II by soft vinyl material. Manned to look massive standing taller than 13", lack in details to look like those you see in the very first Gundam OYW anime. I have put a 1/100 scale MG Zaku beside so you can gauge the size.

I got mine loose online from the pics, you can tell this battle weary Zaku had gone through some harsh treatment ^_^. Anyway, box-art was from internet source. Even the spike on the left shoulder was broken and so I had patched it up with Gunpla part. Hmmm... Maybe it added some realism to the Zaku  on battle-damaged.

There's only 7 points of articulations including the head so basically the figure is primarily in its standby pose inside hangar. The authenticity mark is situated at the heel of right leg. It does come with any weapon or accessory. To make the pic more interesting, I added in RC T-34 RC tank and Zabi Garma figure.
at August 13, 2013

I think the quality is quite reasonable considering the price. This should be OK for us to display in our shelf or some shop owners would love to have this as one of display items in their shop.

Seriously, it ain't too expensive and hardy enough to let it around anywhere... Guess u are right abt displaying at shops to create the impression tat the shop packed with stuff ^_^

Didn't notice the missing part at first, until i read your information below. Nice modification :)

The mod was done out of desperation.. Thank god was able to masked up the hole.. Lolz..

the PVC figures by Banpresto are really great for me... as the saying says: they are worth more than you pay for them... the few i have by this brand are simply wonderful, the quality in materials and paint job is very high, other brands with products related are quite more expensive and sometimes are not this good !!!... very basic but very neat and nice !!! =)

Like the Hulk reference and couldn't help but add some dialogue. You did a great job of patching it up and wouldn't have noticed unless you said something.

Maybe this was made for the younger kids so as not to get hurt?

>> chrismandesign
Glad that Banpresto is a brand in your good books. I must admit that Banpresto had excel over the years and some of their recent Gundam products made me drool.

>> bluedrakon
Both Zaku and Hulk can be such lovable character and Hulk especially funny in the Avengers live action movie. Naughty too at the part he punched Troy away.

>> Dian Yusuf Muldani
Thank you for crushing in while you blogwalk... Do come again. Arigato ^_^

A classic character in Gundam series..

Did you sell yours away? I got the exact one from a flea market, even the broken parts and scratches are the same.

Yup, I sold it at CSC flea market and you must be the buyer. Lol.. A small world and even smaller world of toy collection..

I still have the vinyl Gouf if you are interested ^_^

Can contact me @ transformer_31@yahoo(dot)com(dot)sg
Some shelfwear for the giant blue... Best price $15/-