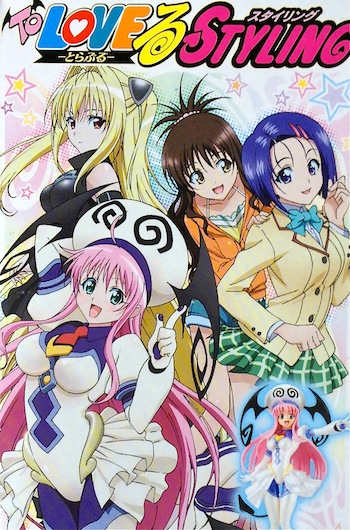 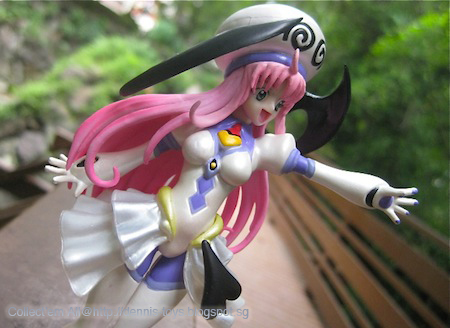 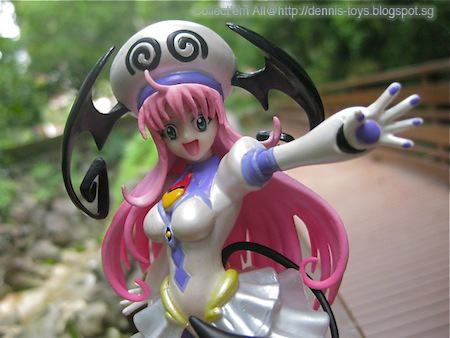 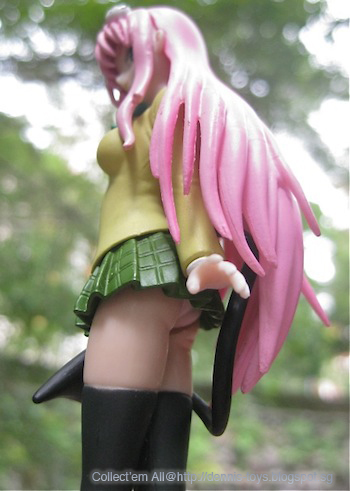 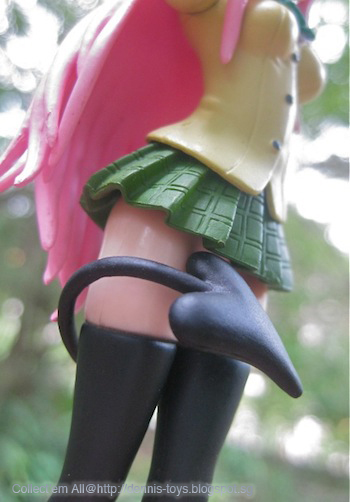 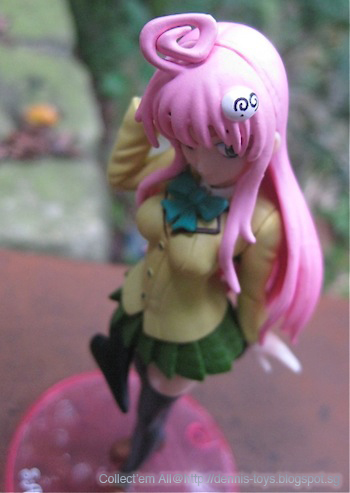 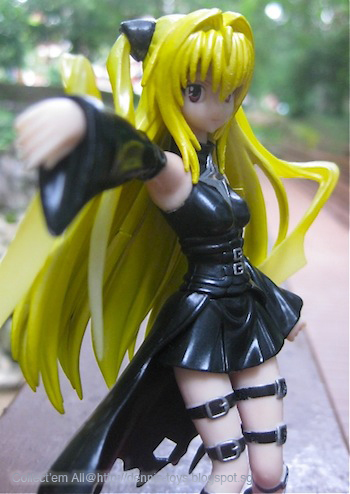 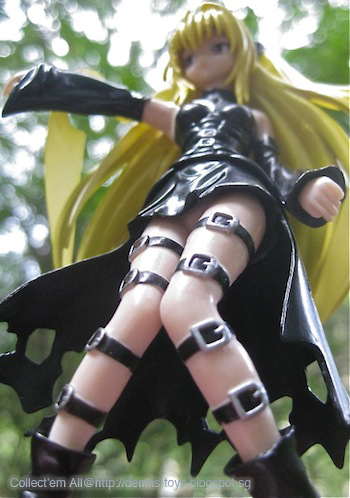 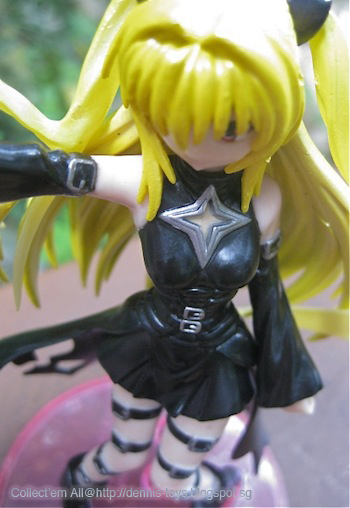 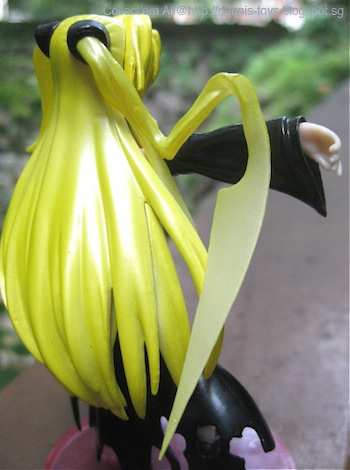 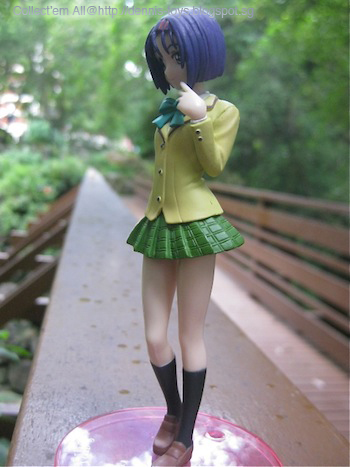 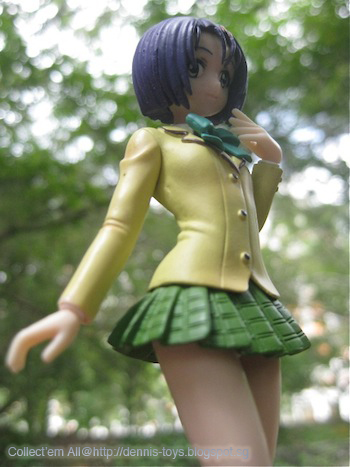 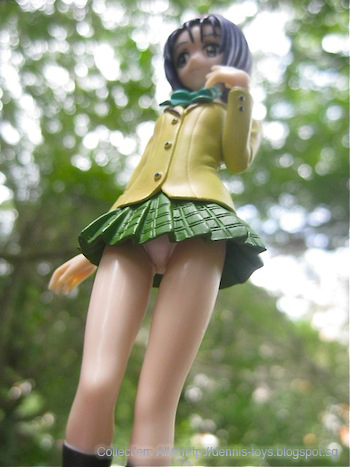 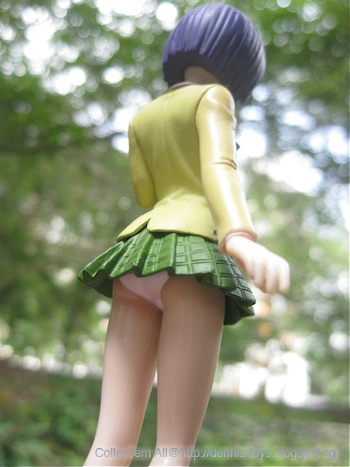 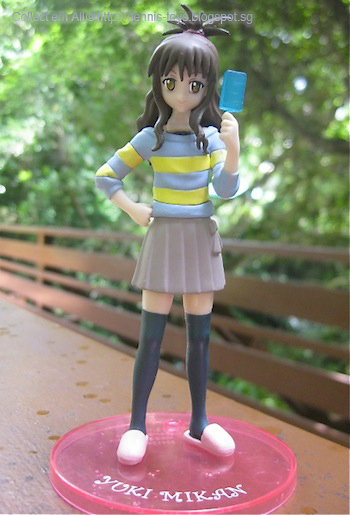 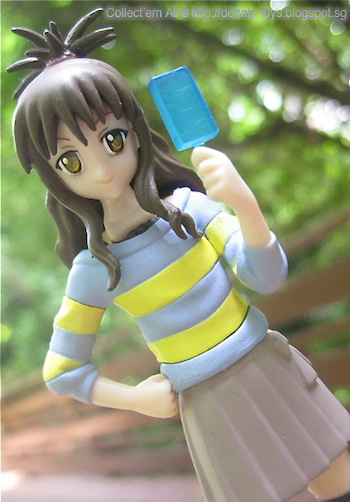 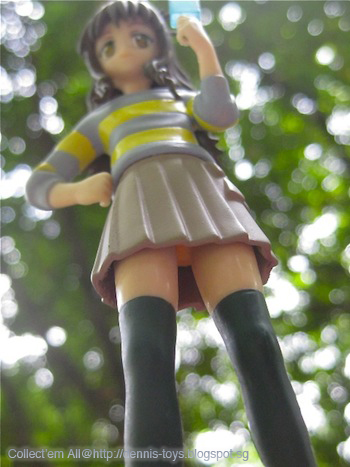 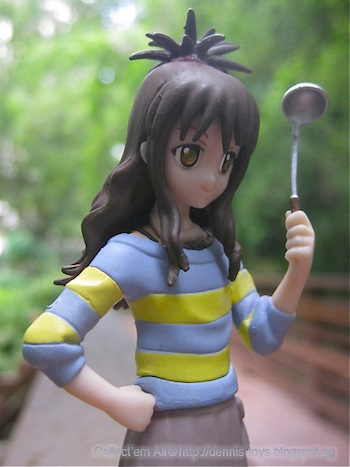 Hey! That isn't fair! Why issit that Stanley always get the best deal @ CSC and I often missed out on such opportunities like I didn't even see it. Lolz... Never mind tat! At least I got to review on these lovable trading figures from the highly acclaimed ecchi anime 'To-Love-Ru', now already @ third seasons, not counting the OVAs. To Love-Ru Styling figures are products of 'Bandai' (Big B support ecchi too! Think they work on anything that's popular) released during the early November of 2008 as candy toy/trading figures. The fixed-posed-PVC figurines are considered non-scale which stands approximately 5" balanced on a clear pinky rounded base with the character's name imprinted on them.

Four of the most popular girls from 'To Love-Ru', featured in this lineup are Konjiki no Yami, Haruna Sairenji, Mikan Yuuki, and two of Lala Satalin Deviluke (dress form version and school uniform version), for a total of five possible types to collect. They come randomly in the blind-box packaging, at released price of 450 yen. Trust me, Stanley got them the complete set way cheaper than that .... Lucky lad just like Rito Yūki!

Based on a shounen manga written by Saki Hasemi and illustrated by Yabuki Kentarou. It is serialized weekly in Shounen Jump. The story is about Yuuki Rito, a high-school boy who cannot confess to the girl of his dreams, Sairenji Haruna. One day when coming home and sulking in the bath-tub a mysterious, nude girl, appears out of nowhere. Her name is Lala and she comes from the planet Deviluke, where she is the heir to the throne. Her father wants her to return to her home planet so she can marry one of the husband candidates, but she decides that she wants to marry Rito in order to stay on Earth. Commander Zastin has been ordered to bring Lala back and has already battled Rito. He reports to the emperor that Rito would be suited to marry Lala, after hearing Rito say that marriage is impossible unless it is with the person you love (Rito was actually defending himself but Zastin and Lala thought he was defending Lala). With this speech, Lala truly falls in love with Rito and decides that she wants to marry Rito. Her father decides that, if Rito is able to protect Lala from her fiances, then he can be her fiance, but if Rito cannot protect Lala from her other fiances, Lala's father will kill Rito and destroy Earth.
at February 01, 2013

It was the week when we were selling stuffs with Kenny. I saw that to love ru figures. I dunno you also like this eechi anime lol... Looking forward to Our OTAH trip we will be deeply poisoned.

Ha! Ha! I was the one who did most of the shopping that Sunday but why was I so blind... Seriously, my envious and happy for you that you got these lovely figurines. I must say some of those ecchi titles were hilariously good. Come March 19th will be a our on holds bar Otaku trip! Can't wait.... Ryokai Ikimashou...

it will be a harlem collectors experience LOL

We should have plenty of time there to experience the manga, anime toys and game culture! Nice...

not my kind of series actually... @.@... is this something like Tenchi Muyo ??? i think so... well, it must be that i’m not the "tender guy" and when i want something hilarious i lean more to black humor, sarcasm, irony LOL...

uhmmm the figures themselves are great but in my personal opinion in most of the recent gashapons, the level of detail and paint job is higher than in the trading figures with a few exceptions... by the way, the background is very inspiring ^^... =)

A way similar to Tenchi Muyo, but motto love than fights. Caught in weird situations and seduction. Bro, agreed that these series of trading figures ain't top in details and in my opinion Bandai didn't do a shabby job. Well, they have a reputation to uphold. Thanx for the compliment on the background. It was taken a park near my place but infested with mosquitos

Gotta love this anime and the lovely girls.

So many pantsu shots, my nose won't stop bleeding - LOL!

I think it's your kind of anime and Oop! I think I was a bit over on the pantsu shots this time round.

Glad to hear u r going to japan soon..sure have lots of toys to hunt..haha..