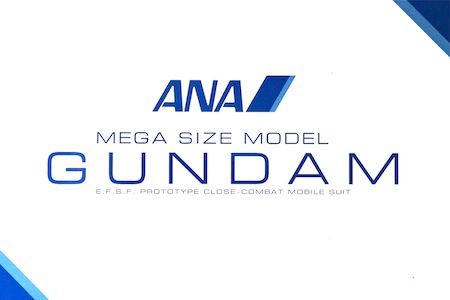 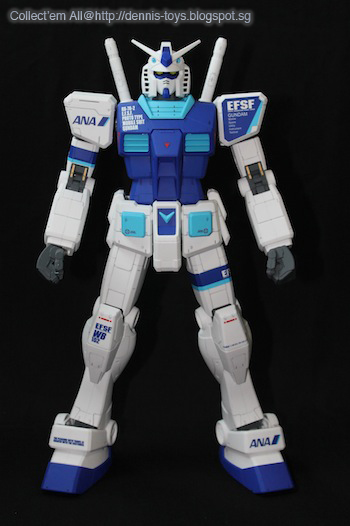 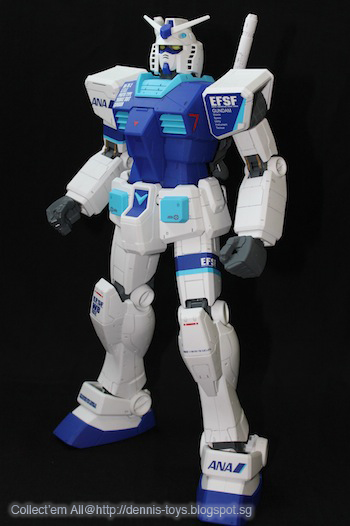 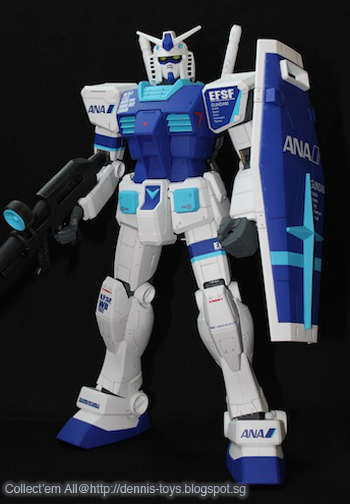 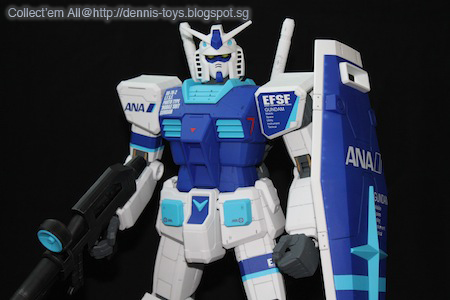 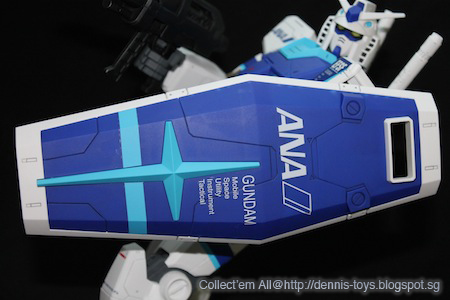 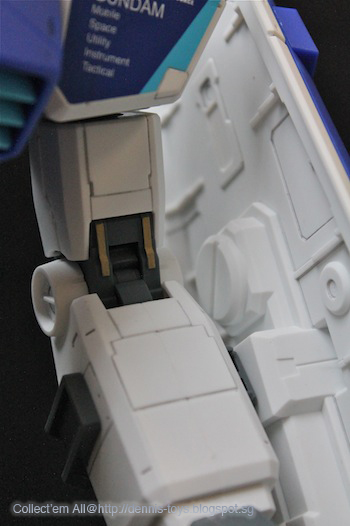 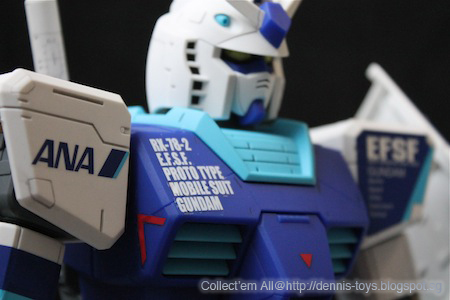 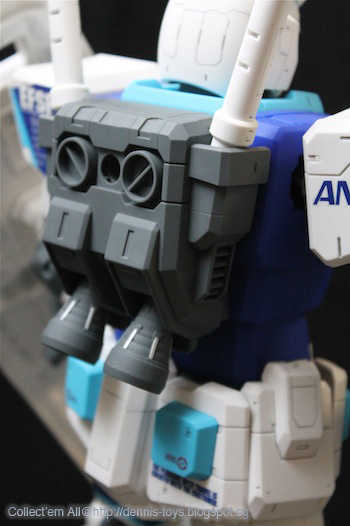 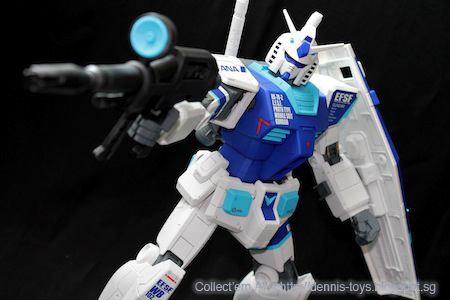 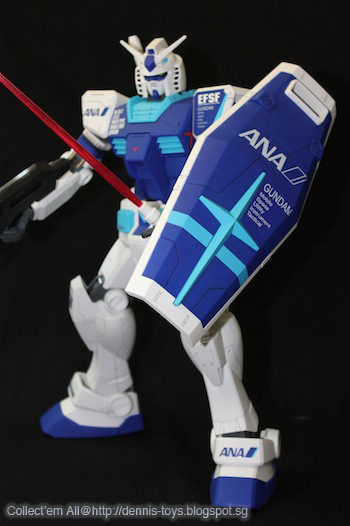 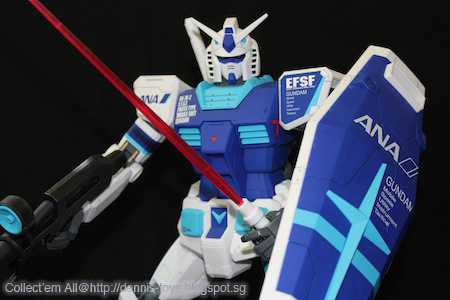 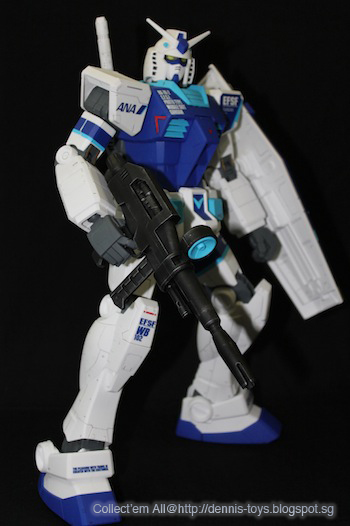 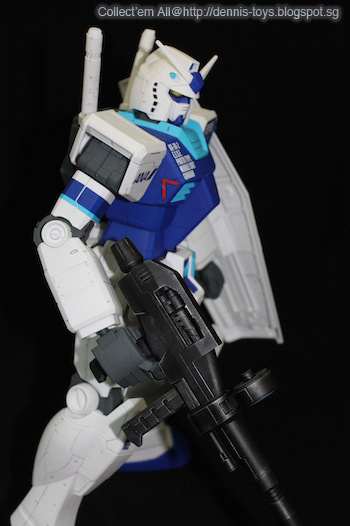 My second time working on Mega Size Gunpla whereby my first experience was working on Gundam RX-78-2, belonging to Leon (Open The Toy). Previously, I only assisted Leon to add some panel lines and top-coating. This time around, I am again honoured to handle another Mega Size Gundam RX-78-2 and rejoiced that this is not just an ordinary Gunpla but an exclusive kit for ANA (All Nippon Airways) with the blue and baby blue colors.

In the past, I heard that this Gunpla was only offered to passengers flying with ANA and whoever order must have a residing address in Japan. This made the Gunpla really hard-to-attain and whoever dear for it, would have to pay a premium price. Anyway, this isn't mine but Stanley's, who had straight built the said Gunpla and I'm just helping to do some touch-up. I must admit that this is the first time, I had handled such big water-slide decals. Trust me! they are really HUGE.

I had used pencil to draw panel lines on the white area and marker on the coloured parts. During the process, I had also trimmed and filed off some of the protruded parts, before my usual way of spraying a layer of matt topcoat. Something extra I did was painting the elbow with some gold, taking the idea of RG and some silver paint on the thrusters on the backpack to add contrast. The beam rifle was sprayed with flat black before dry-brushing with silver paint (Mr Colour No.8 in this instance). I'm very grateful to master kenny for imparting the dry brushing technique. Never know simple technique such as this can produce amazing metallic look to the appearance of the rifle.
at February 09, 2013

Bro, this is the first time i saw Gundam in an Airline version...

Wow ANA Mega Size! Salute to Stanley for having this. Well done Dennis!

seems that your friend Stanley has good contacts (and a happy wallet !!! LOLOLOLOLOL)... not only is a megasize (with a megaprice) but is a limited edition quite hard to get looking at your description... it reminds me the RX-78-2 by Katoki Hajime but with a color scheme in range of blue color which looks really good !!! =OOOOO

>> deSMond
Gundam is a symbol of hope and so it been marketed in many ways from Nissin Cup Noodle to 7-11and even Airlines in Japan.

>> Ant Sized Man
White make up majority of Gundam and this colour goes well with most other colours. I especially like the baby blue. Very unique colour indeed.

>> LEon
Thanx for the compliment bro! The size of this Gundam makes it easy to handle like yours. Stanley sure is resourceful in get rare Gundam stuff.

Nice color scheme, too bad it only sold in Japan. I heard the HG gunpla of ANA version is coated with chrome-like finish

>> chrismandesign
Yup. Stanley has a stable engineer job and still single. So I guess he has more spare money for his hobby. BTW, I will help Stanley list the item on eBay for auction as he wishes to donate away the earning for charity.

Ha! Ha! If only they have! I provided them an milking option.

A rare piece of collection that we dont see this region's collectors having it. Kudos Stanley!! Nice dry brushing bro. =p