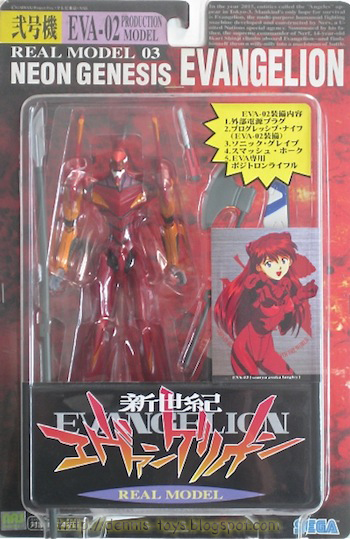 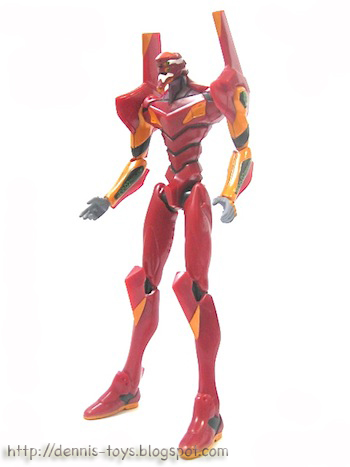 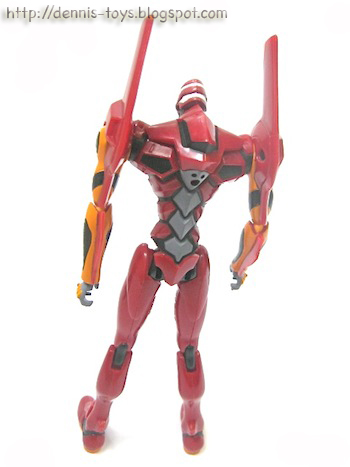 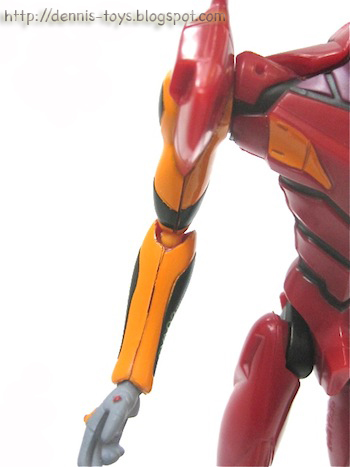 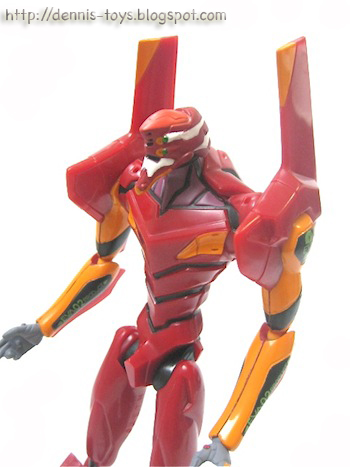 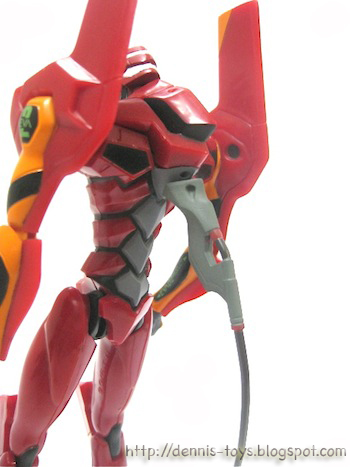 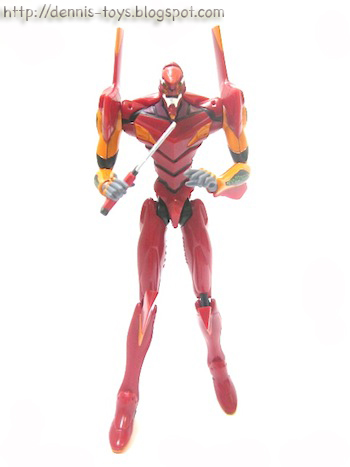 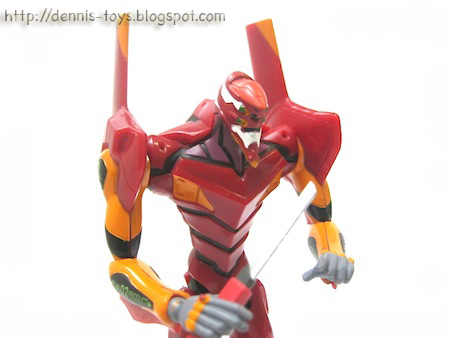 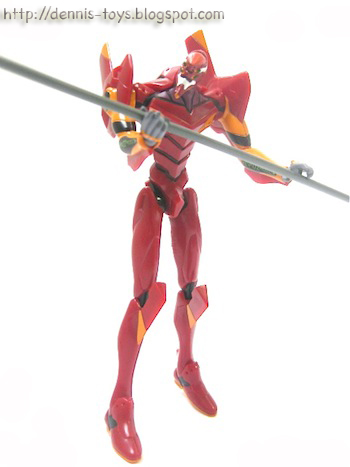 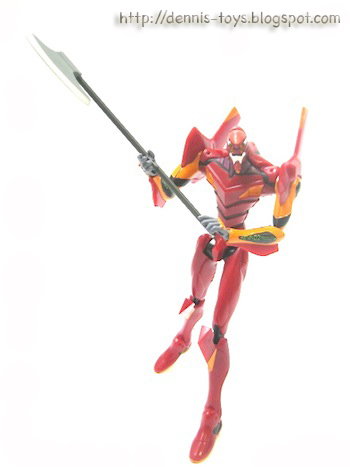 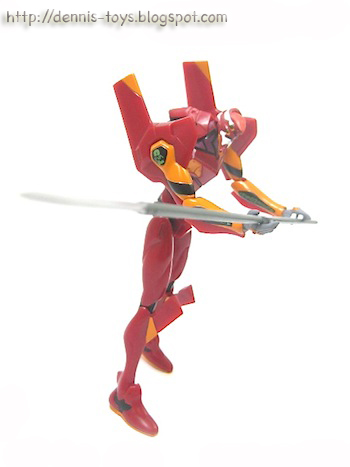 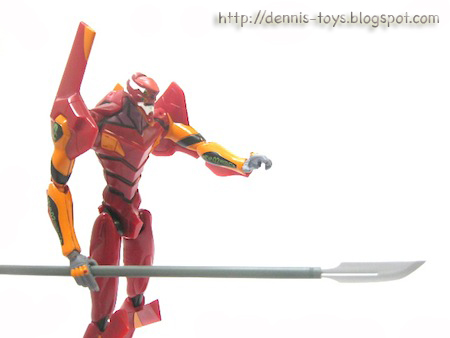 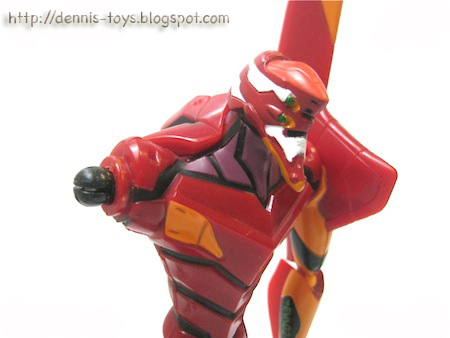 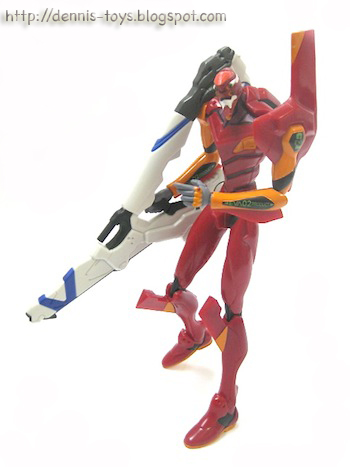 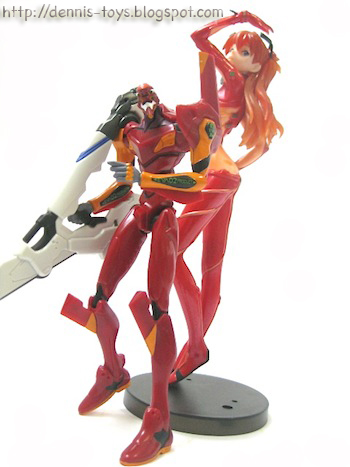 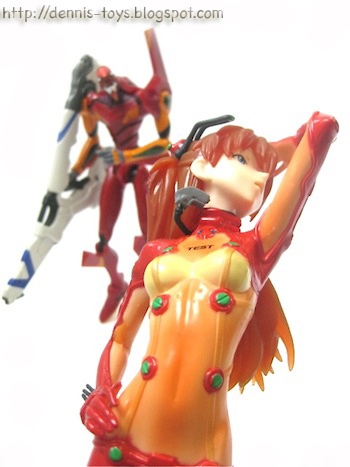 Here's another review of classic action figure line of the epic anime: Evangelion. Defending Tokyo 3 is another innovative humanoid designed mecha, the EVA Unit-02 piloted by Asuka Langley. A fiery red colour scheme that suited Asuka's aggressiveness in battle and added the sexiness of the character in red plugsuit.

The toy was made by SEGA with the packaging presented in a form of blister card so you clearly see the actual toy and accessories. Collectors could just opened the toy by sliding the backer card out, after removing the staples without damaging the integrity of the packaging.

SEGA has also included a card with illustration of Asuka Langley. Sorry, the figure of Asuka is not included, as I used it to making the pics more graphical. The action figure stands approximately 8" (good size for display) with more than decent sculpt and paint job (even metallic touch to the blades). The elbows were the only parts with ball joints whereas other limb joints only allowed minimum movement, back and forth. Most of the poses were just standing and kind of rigid. Still, with some imagination, this action figure could produce relatively good poses.
at October 15, 2012

i don’t know why the old Kaiyodo (not Revoltech) EVAs are hard to find nowadays... it’s prompting me to do a review about them (!!!???) LOL... if i’m not wrong, this is the one that went wild and began to attack the other EVAs... not so sure if it was in the regular series or in the "extended version" ’cause i have not seen Evangelion 2.0... this figure still looks pretty fine and the mecha design itself helps a lot on that...

also the Asuka figure (not included, did you mention it ??? LOLOLOLOLOL) looks gorgeous and captures the sensuality of the character... what a pity that she couldn’t bear the pressure of the combat and ended mentally disturbed...

I do have the Kaiyodo version in standing posing but they all come with a hunch. Very good painting with gloss finishing. Slightly bigger than the ones made by SEGA. It's a higher pice for better quality in the sense.

I had only watch T.V series and the older version of OVA years back so the memories ain't that clear now. I kind of remember the occasion EVA going berserk and started eating the angels and Asuka going mental unstable. But in the end, everyone else died beside Shinji and Asuka making it felt like Adam and Eve to start a new world again.

Thank you the comment on the Asuka figurine too! I will do a more in-depth review of it next time. Cheers!

Bro, I think the image is too bright..do you feel that??

Maybe a few of the pics are on the brighter side. I should make some adjustments. Thank you...

I remember having this set when it came out back in the day. I actually sold my figure collection before moving to Florida and wish I hadn't.

Thanks for the memories and shots :^D

Actually, I had also sold this piece away to a friend and is keeping the Kaiyodo version. My friend is nice enough to give me more time in order to take pics of the toy.