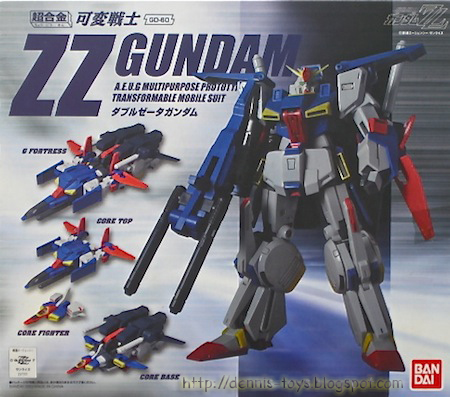 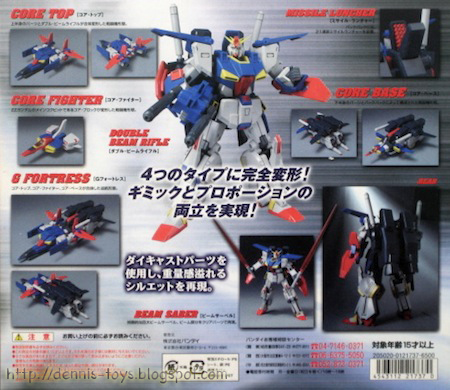 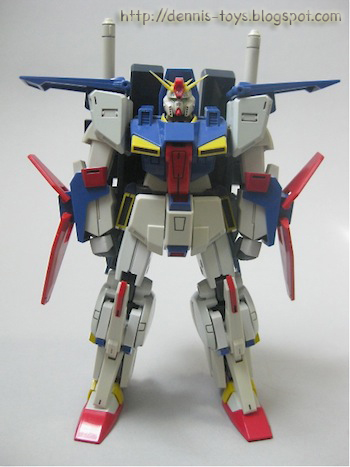 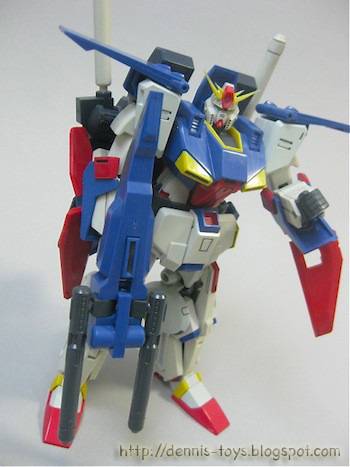 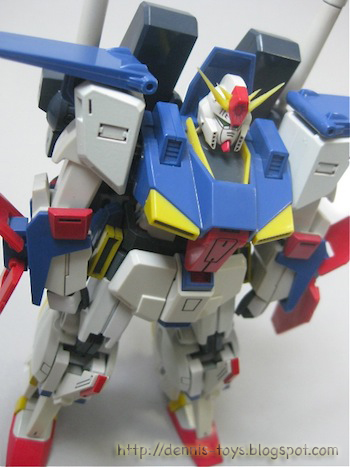 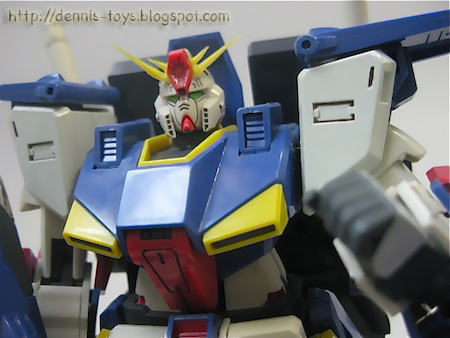 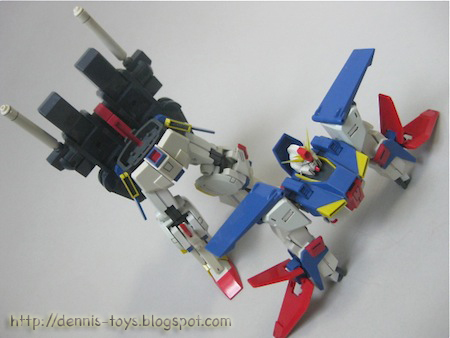 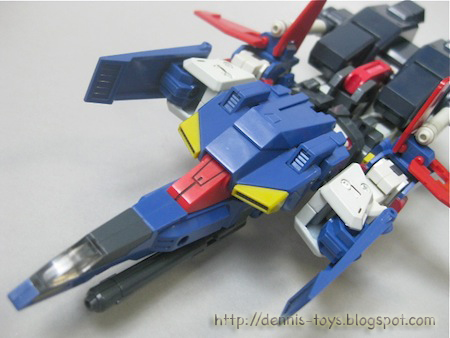 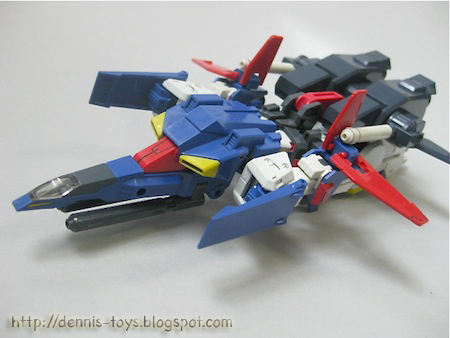 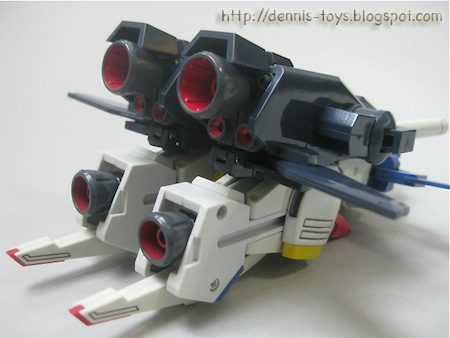 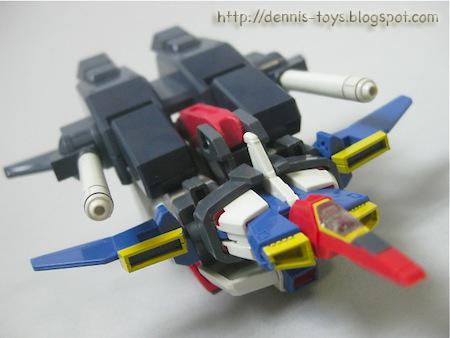 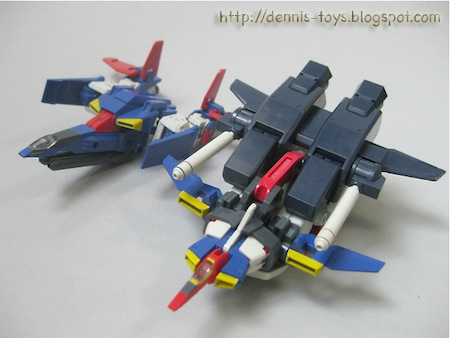 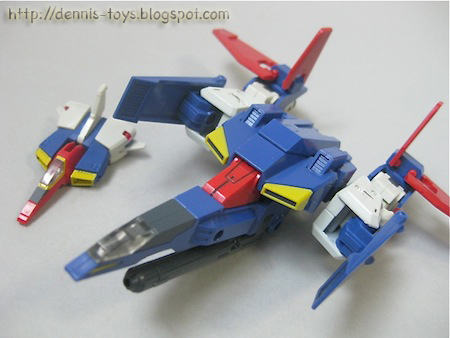 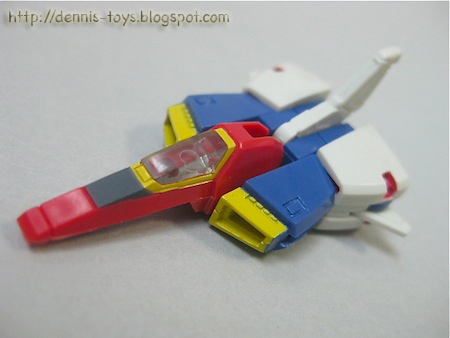 Introducing my chogokin MSZ-010 Gundam Double Zeta. ZZ Gundam is a series of U.C. timeline that continues from Z Gundam. After the AEUG had lost their valuable Gundam pilot Kamille Bidan and in their struggle for existence, they found Judau Ashta as another potential pilot for ZZ Gundam. Unlike the Z Gundam, ZZ Gundam is much more resilience and can discharge more firepower. The core fighter (mini plane) from the torso can join up with other parts of the body to form a big aerial assault craft.

The thing with Chogokin toy is that their value appreciate with time. Collectors tends to see and feel the beauty of the metal component embedded to plastic. I must confess that I'm not a faithful follower of ZZ Gundam series and had stopped watching half way. Perhaps it's due to the old anime drawing from the 80s, the weak plot, the unappealing main character/pilot (Judau Ashta) draggy storyline or simply because the mecha design isn't to my liking.

As least I think the mecha design of ZZ Gundam is interesting and sophisticated. It gave me the impression of flying fortress that's transforms me to bulk standing armor which still takes the endorsement of Gundam. The toy provided a lot of fun from the Neo core fighter...Core Top...Core Base... to G Fortress before transforming it to the heavily armored ZZ Gundam.

Not only is ZZ Gundam heavily armored, its has the firepower so incredibly strong that's out of the league to many MS. The double beam cannons will kills its enemy in the line of sight and an ultra thick beam saber that easily cuts the enemy into halves.
at April 18, 2012

Bro which part is metal??

when you go for something impressive you can’t go wrong with this guy... many people consider it a "flying brick" but they ignore the challenging design involved in this mecha... also with this firepower who needs kung-fu kicks and fast movements ???... if the rest consider that less is more, i go for more is more, period LOL... this is a load of accessories and seriously with all the possibilities in configurations, you can have a lot of fun... i love this figure, is a fabulous collectible =OOOOO

Mainly on the legs and some parts at joints.

I actually forget to mention that the toy is of 1/144 scale and for a small toy, it's quite delicate. Like you had mention, the sophistication of the design, injected a lot more enjoyment playing the toy.

anytime you can 'play' with your figures, the more fun you can have.

It's nice to play with however at times frustration can build up during photography due to my impatience.

Transformers have a character called 'Sixshots' and can be transformed into six modes. It's really fun toy that many can consider.

Even more cool that it is able to come in so many jet forms.

Like you I also couldn't finish watching ZZ. However, I recently read up a little bit more on ZZ as I understand Marida Cruz who pilots the Banshee in the brilliant Unicorn series is a clone of the Puru character in ZZ.

I've been wondering, is there still many of GFF,MSIA and other gundam figure arround Sing or Malay ?

No prob for the spoiler bro. In fact I think it's more like Gundam knowledge to me. Anyway, we will watch it together this time next month. Unicorn Gundam Episode 5 on big screen. I'll loving it!

MSIA is officially discontinued and replaced with Robo Tamashii. Latest release Nu Gundam. Occasionally, you can still see some local collectors here like me letting go their collection. Some on eBay. I'm selling away mine cheap. Just sold away my MSIA Hyaku Shinki & Strike Freedom Gundam yesterday as a set for 40 Sing.

>_< hope I can catch your list again before it sold already.

The problem with me is that I'm pretty lazy to take pics due to all the setting up. Most of the time only when I just about to sell them after deal was clinched. That's way, sometimes what you see on my posting was toys had I had sold off recently.