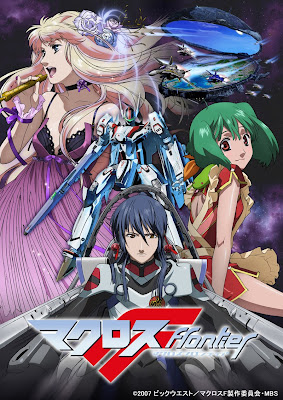 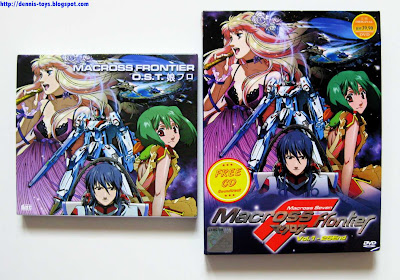 The front cover for DVD & OST 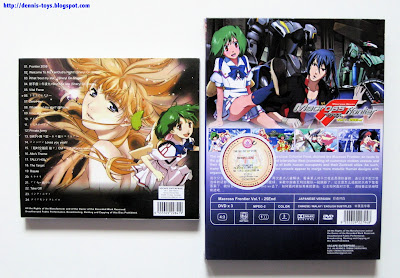 The back cover for DVD & OST 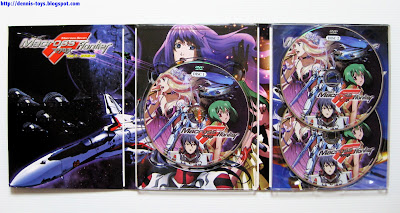 Nice artwork for this boxset 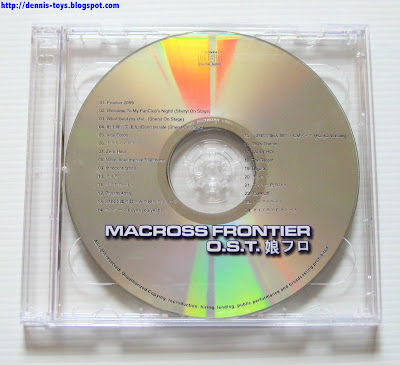 OST CD
I have finally finishing watching Macross Frontier. Pretty slow or a Macross fan hah! I prefer watching anime on TV rather than on computer screen. But since the original Macross Frontier DVD were only released in code/region 2 format, I could only settle with friendly DVD from across Singapore that comes with English subs.

I had first bought the pirated version in plastic sleeve at CSC but none of my DVD player could play the DVD after the first six episodes and it was really a frustrating experience. Being desperate and impatience, I searched the internet and found this DVD boxset from a Malaysia seller on Ebay.

The casing of the DVD boxset is well decorated and it comes free OST CD. I'm not sure if it is a bootleg but at least the DVD has Malaysia censorship and authenticity seal. The back of DVD casing also has the distributor's name and address printed.

Macross Frontier is really enchanting and this is the best anime I have watched in recent years. It a norm that Macross anime would have numerous OST and Macross frontier really mesmerises me with beautiful songs by May'n & Megumi. Since the anime is a production of Macross 25th Anniversary project, it catered to fans with a lot of scenes that were similar or familiar to previous Macross animes.

I guess Alto was like playing the role of Hikaru trap in the love triangle between Sheryl Nome and Ranka Lee. Michael and Klan were alike Max & Millia. Don't you think the first time Alto rescuing Ranka is similar to Hikaru rescuing Minmay in VF-1D. A lot of elements like Macross Attack and Macross Cannon, and Minmay Attack were featured in Macross Frontier.

In the original Macross Super Dimensional Fortress, Max is the one going after Millia but in Macross Frontier, Klan is the one taking the approach. Ironically, this time round, Ranka sang the iconic 'Minmay DYRL songs' against the Macross fleet.

Can I ask what the quality is like? Also, I'm a little interested in what the menus look like :P Don't ask me why but it's just one of my fav parts of a dvd XD

I'm not really an expert on DVD so all I can say is that the resolution good. Sorry for the menu, my DVD is now with a friend and I can play to watch.

Hi Matt,
I just gotten back my discs and had checked out the menu. There's no other bonus beside language selection and episode selection. There's moving background of cut scenes from the anime.

I definitely enjoyed the Macross post. It proved to become Pretty helpful to me and I’m positive to all the commenter right here It is always good when you can not only be informed, but also entertained I’m certain you had fun writing this article. I just ordered these consoles at PIJ! I’m excited! I’m going to have these in week! http://bit.ly/wNFdeA