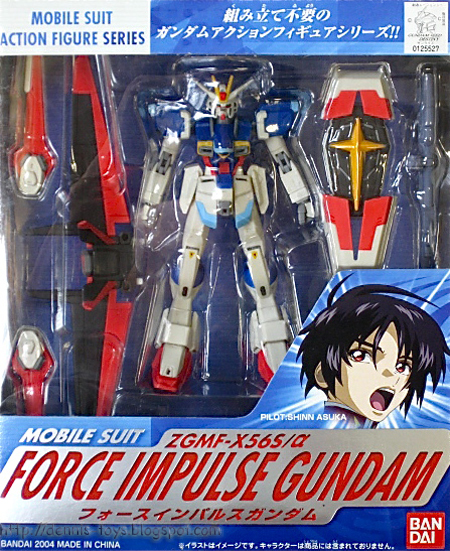 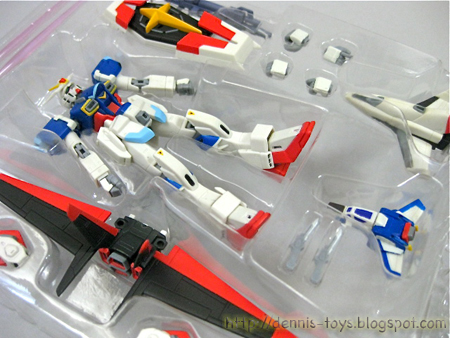 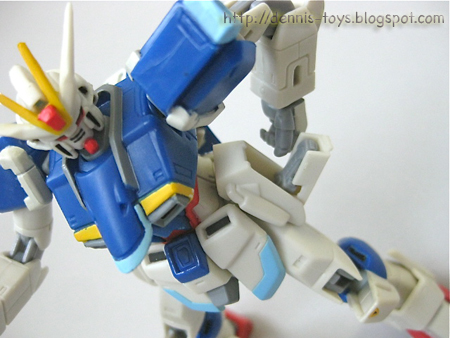 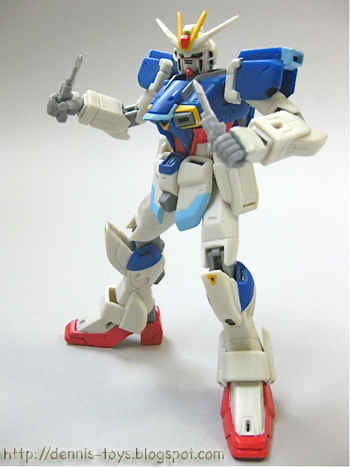 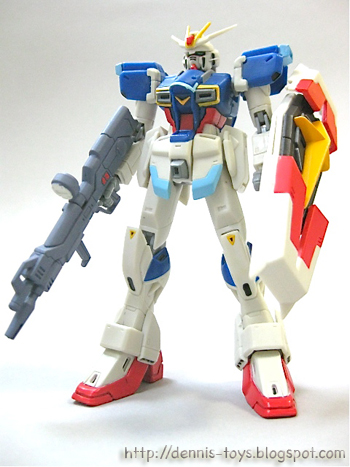 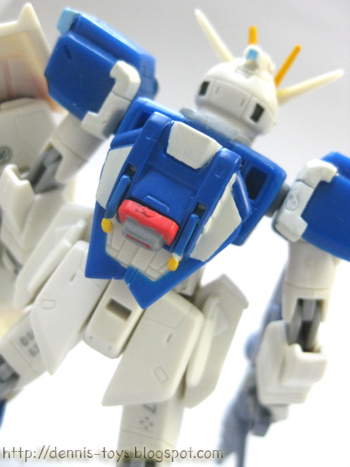 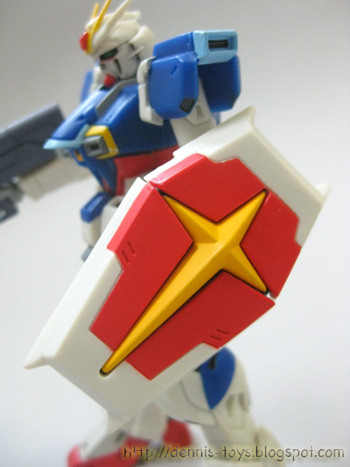 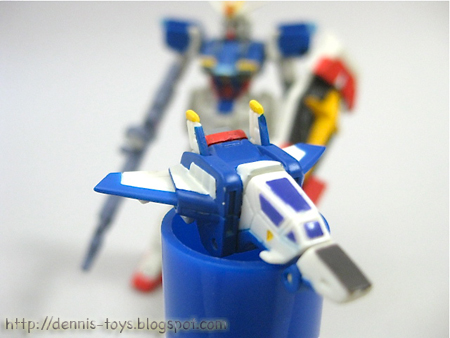 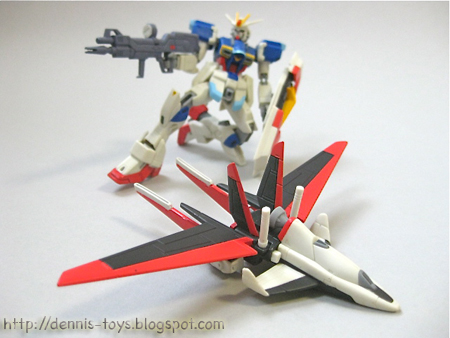 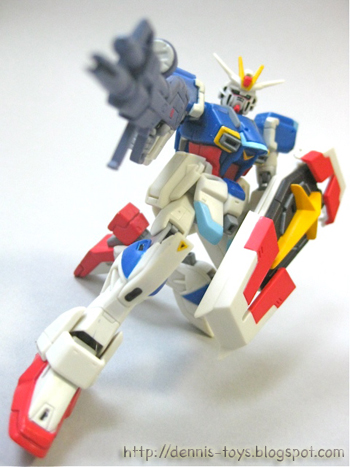 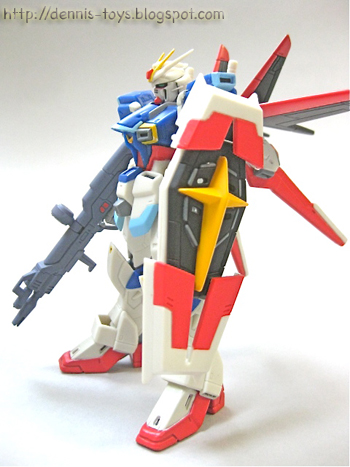 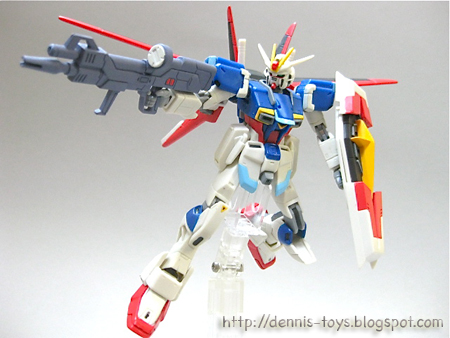 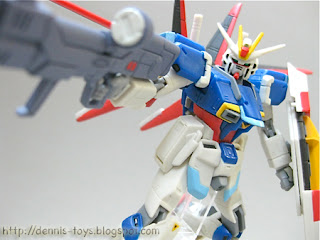 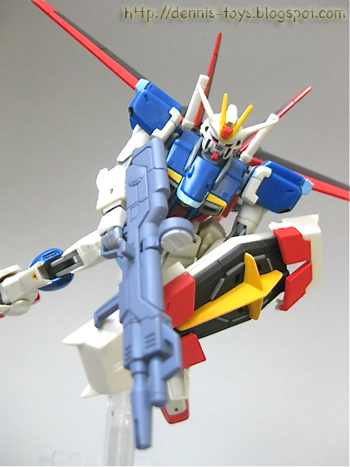 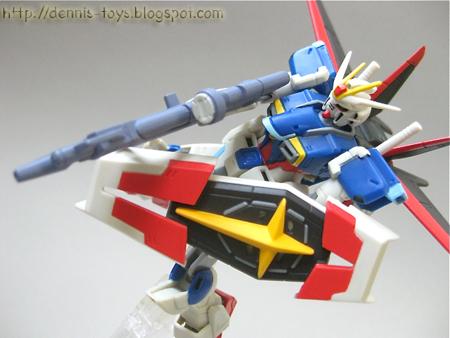 The other recommendable reason is the accessories that came with the toy. Cool feature like the "Folding Razor" anti-armor knifes, were not only made foldable as accessories but also could be stored in hip armor. The mini core fighter could actually be folded and attached to the rear of the action figure. Another interest thing is the shield, it could be arranged either retracted or extended. Lastly, the 'Force Silhouette Pack' could be attached to another aircraft  before delivering it to the MS, alike Aile Strike Gundam.

The figure is also highly posable with extendable elbow and kneel joints which had significantly increased the range of movements. I'm now really tempted to get other MISA from Gundam Seed series.
at September 25, 2011

Somehow, recalling the scene plus your comments from past to present, the whole thing seems like a comic relief. Lol..

The paint job and sculpting work on the figure are good..Very nice figure as you can take it out of the box and play it straight away..Very poseable as well.

Yup, I'm pretty impressed and I won't have felt if I didn't take it out from the box. I'm also happy that the toy stands out really well in the pics. Better than what I had expected.

i’m not pretty sure, but i think i have one of this guys in model kit (NG 1/100) or something similar... i like both the design & the color scheme of this MS... the accessories department seems to have done a great job & the figure shows an excellent articulation & poseability... besides all this, the pictures r very appealing, u r improving ur skills pal !!! congrats =D

I believed the you might be referring to Aile Strike Gundam cause Force Impulse Gundam does look a lot like the one Kira Yamato had piloted. Many thanx for the compliments. I guess photo-taking has got to do with the mood at the time when the shots were taken. There were a lot times I could not even get any desirable shots.

This series looks like a nice jump for my son from the SD Gundam and Gashapon sets. I may have to look for a few online.

haha bro, photography skill level up like what Chris has said ^^ The sculpt and detailing is quite good from your pictures!

now that u've mention it, the panel lines did improve a lot. HAHA! Plus the head sculpt is pretty good and not so cartoonish.

>> bluedrakon
Indeed, MSIA was suitable for children who are able to handle small parts. It appeals to a lot of children in Japan. Further the price of MSIA now had dropped due to newer Gundam action figures release like Robot Damashii & G.F.F.

>> chubbybots
Thanx bro! There were some previous posts which were in the pipeline of reintroduction with pics retaken. Some of my previous pics really could not make it.

>> sl619
MSIA at a later stage were rather well made and quality also close to Robot Damashii. This one was born during the transition period.

another cool stuff from you sir,, this time comes from MSIA force impulse with cool review :D

Even though MSIA is no more in production, I hope some of my posts would be a good tributes to them.

U.S. economic situation remains bleak,christian louboutin
the unemployment rate remains high, the public dissatisfaction with the status quo, the "occupation of Wall Street" demonstration in New York and the increasingly wide social support. 17 to the latest polls show that nearly christian louboutin shoes
Qicheng New Yorkers support the demonstrators and called on the Government to strengthen financial sector supervision.
The finger of blame points to the demonstrators outside the daychristian louboutin sale
on Wall Street within the tight loose. Scrutinizing the police on the street outside the passing vehicles and suspicious persons, vehicles, whether or not to enter some of Wall Street, have been stopped by the police for examination. Some christian louboutin uk
demonstrators were dispersed into Wall Street, holding various placards to protest, but not for the stay.Wall Street in front of the landmark New York Stock Exchange, RCMP are still on patrol, but not very tense, and sometimes also a few willing to talkchristian louboutin outlet
with visitors. Just too late to clean up the streets of horse manure piles too unpleasant, many people rush through their noses.Wall Street's mark - Bronze Bull statue, although the fence Weidang up, but not as demonstrations broke out a month ago when a large number of police guards, one camera can be approached. The birthplace of the original demonstration, the Wall Street near the lawn bowling (Bowling Green) have not see any protesters, but a number of police cars parked in the monitor.