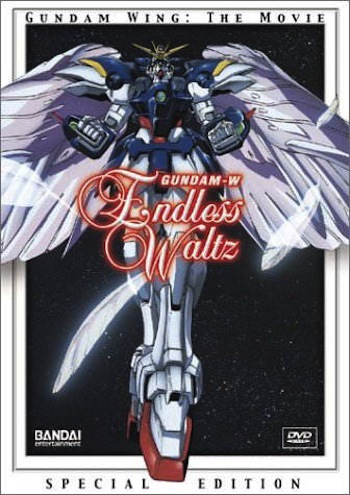 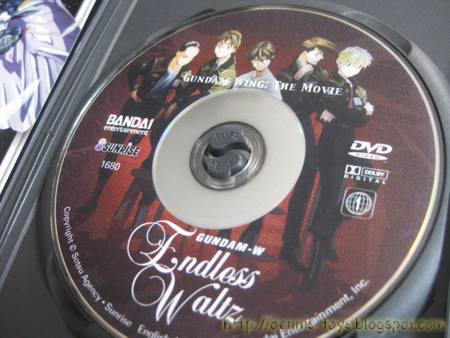 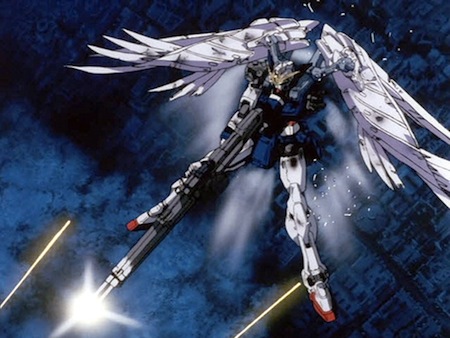 I'm watching this Movie OVA for the second time and still intrigued me. Some might say that Bandai used this Movie OVA to sell more Gunpla, but it's an undeniable fact that these redesigned Gundams  in 'Endless Waltz' were awesome and probably better looking than the originals from 'Gundam Wing' TV series. Unlike other OVA or movies that repeated reused scenes from the TV series and retelling the story, 'Endless Waltz' is continuation based on AC 196, a year after the colony wars. This Movie OVA, once again reminded mankind that peace is hard to achieve, however peace is even tougher to maintain. The movie filled up some missing links to the TV series, tell more about the young pilots' background, further re-enforce the truth of 'Operation Meteor' and the haunting of Treize Foundation. Personally, I like this wrap up to 'Gundam Wing', much delight to see once-lost-faith Zechs Merquise returned as codename: Wind, in Tallgeese III. New cool mass-produced mecha like Serpent Cusom was also introduced. Personally, I feel that there should be more scenes between Heero Yuy & Relena Peacecraft as the reunion seems rather short-lived.
at October 19, 2011

i think i have watched this OVA at the beginning of this year or at the end of the last year & i really liked... indeed is the only one i have from Gundam & OFC is not the original DVD, but i’m planning to get the whole collection of Gundam series (not original as it’s not available at a reasonable price)... the mecha design is a bit old-fashioned but the Wing Gundam is just fabulous, also i agree that the Serpent Custom is a great design (both of us have this HG kit HEHEHE)... =)

I got this dvd from Ebay and shipped from States. I believed it would be cheaper in postage to your country. As it's an old anime, the price should have been lowered. If I'm not wrong, Wing Zero Custom is most well received in this OVA. I personally go for Tallgeese. I have the 1/144 & 1/100 Serpent but intent to keep only the 1/100 scale as size matters.

I think this should be one in your collection for any Gundam fan. It is short as you noted, but some great fighting in it.

Agreed. One not to be missed for any Gundam fans. The pace of the anime was set right with sufficient fighting scenes.

Oh yeah here's a you tube link for those who wanna hear the 2 different versions of the songs.

Both are sang by Two-Mix the original Duo who sang all of GW songs. Posted the links above for you guys to hear and enjoy. Personaly I prefer Last Impression and it was my 1st Gundam Wing Endless Waltz VCD I bought before I got the Toonami's Dvd version XD

Thank for links Victor. I saw you the last time when you dropped by to find 'A'. Nice to know another Gundam fan and man, you are really knowledgable on Gundam stuff. I think most of the OST from Gundam W are cool and personally, 'Just Communication' from the TV series Is my favourite.

Haha yup I still remember =)
Agree think Two-Mix kind of took gundam theme songs to the next level. Infact I like all their GW songs. Maybe When I go back SG in Jan I'll lend you my Endless Waltz VCD for you to see the difference between the DVD version and the VCD one =)

Appreciate the good gesture. Watching both version will make good comparison. Btw, I just post about Serpent Custom and here's the link:
http://dennis-toys.blogspot.com/2011/10/1100-hg-serpent-custom.html

Statement by the owner surnamed Wang blue suede wedges
in the Mekong River on the road almost all the considerable number of ships to intercept the illegal armed, raided or robbed, and some were abducted hostage, we all know is very dangerous to continue to engage in shipping. Local police confirmed that an old saying in recent years has undergone a lot of cases, he had been Tory Burch Boots in black and orange
personally involved in rescue kidnapped Chinese hostages. As for why all know the dangers but also to run the shipping, he said: "their lives more difficult, if there are other sources of income, it will not run."According to preliminary statistics departments, currently sailing in the Mekong on Chinese ships have 116,tory burch glitter reva
and 20 ships for the Lao nationality, Burmese, but the basic all the Chinese people. In working on these ships is basically Chinese crew members, more than 1,000 people.
Currently, Chiang Saen port in Thailand stranded crewtory burch walker fringe moccasin boot
members a total of 164 Chinese people, cargo 28. Strong crew find out the truth as soon as possible, properly handle the aftermath, and allow them safe return home. Chinese Foreign Ministry spokesman Liu Weimin, 12, said at a regular press conference, Foreign Ministry and the provincial government is coordinating the Thailand,black knee high suede boots
Myanmar, the Lao Government, the Chinese crew members of vessels stranded by the waters of the Mekong River back to provide security and patrol boats for the Chinese public security to facilitate collusion.