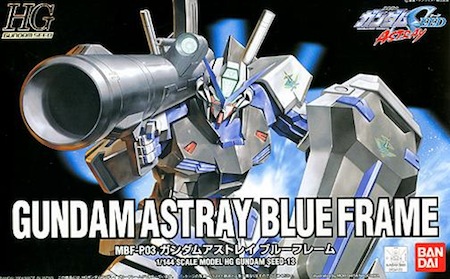 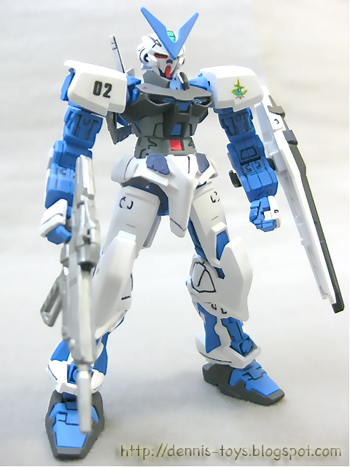 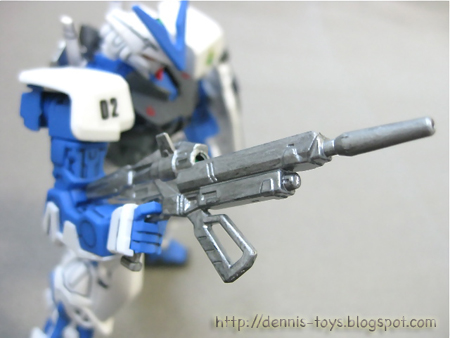 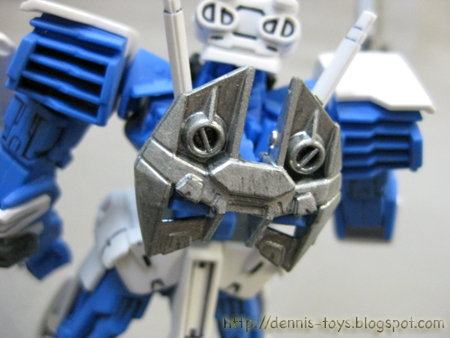 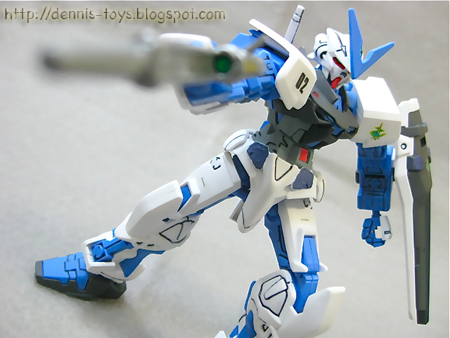 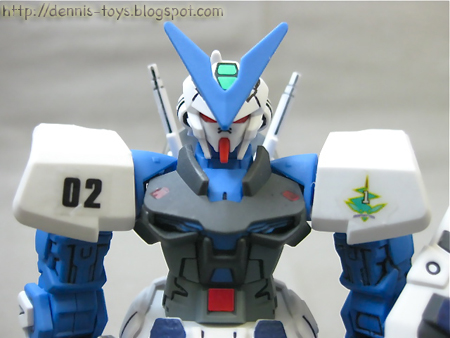 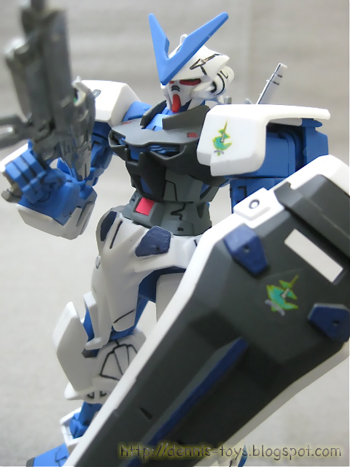 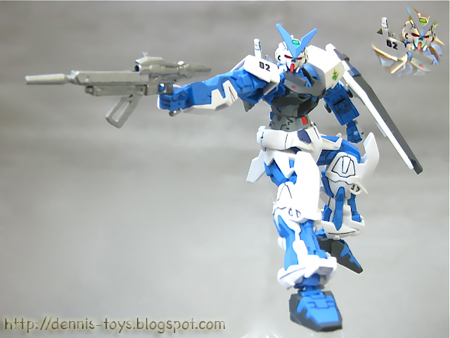 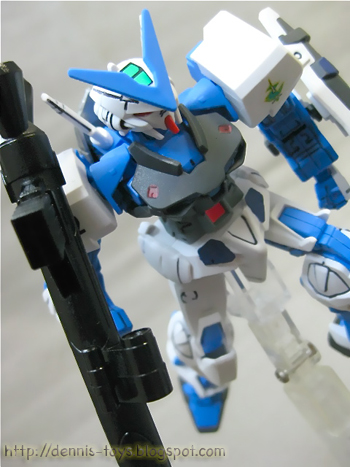 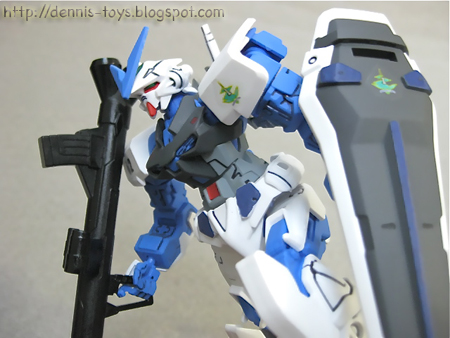 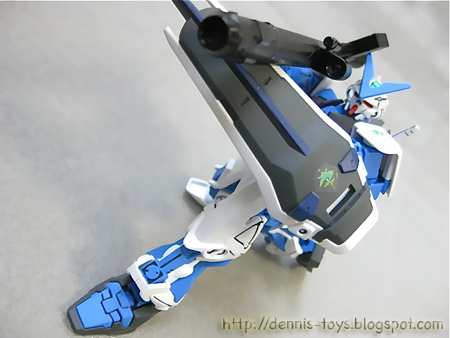 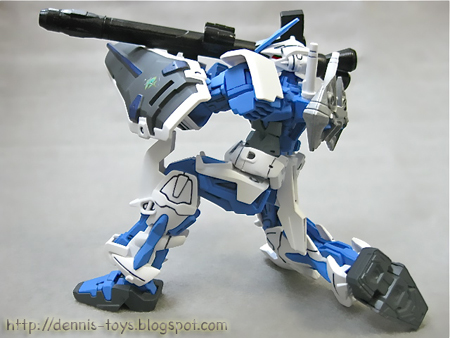 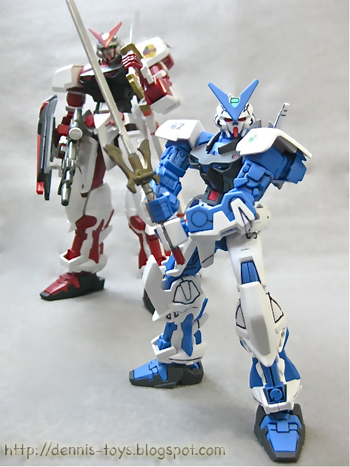 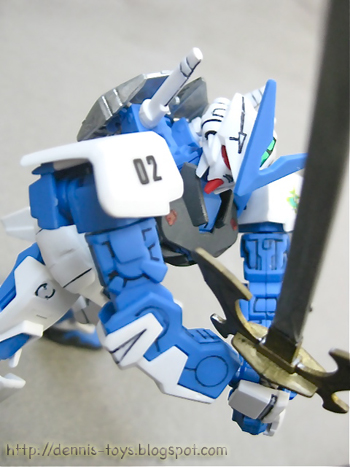 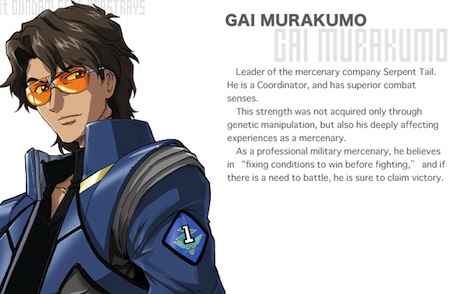 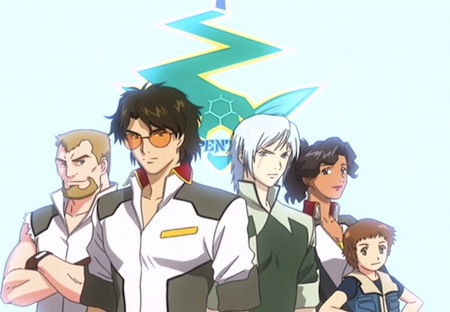 I have instigated Guy 'A' into buying this HG 1/144 Gundam Astray Blue Frame so it's one more Gunpla to his score. Well, he did the usual snap-fitting and I follow-up with the rest. This HG kit isn't hard to handle as all it takes is just some panel lining, Gundam marker painting, some stickers and overcoat matt lacquer. The thrusters pack has a lever to bring it down but I don't understand the rational. The shoulder joints are well designed as it allows the shoulder to move forward and nearer to the chest. Without skirt around the thighs, Gundam Astray range of movement has also increased significantly. Weapons for this Gundam Astray Blue Frame kit is rather basic with standard beam rifle, beam saber, shield and bazooka.

Mecha Anime HQ : Gundam Astray Blue Frame
The Astray Blue Frame was given to the Serpent Tail mercenary Gai Murakumo by the Junk Guild mechanic Lowe Guele after he found it in the ruins of Heliopolis. Gai went on to use the Blue Frame in a number of missions, and he often optimized the MS with mission specific optional parts and armaments. The Astray is a breakout mech design that reinvents the basic Gundam template. All that remains is the V-antennas, and even those are significantly tweaked.
at July 06, 2011

this blue frame is lovely, and i like the gray color in his body, is it painted or just a topcoat ?

The gray is the original kit colour. Just that the topcoat gives it a more matt effect.

It's a nice and sturdy kit in my opinion...

Yes time is totally too fast :(
Thanks for visit.
Bianchii

Thanks for the great paint job! My brother saw your work and said exactly this to me: "your friend is a much better gunpla builder than you.."

this mecha design is one of the best among all the Gundam series, i like specially the "samurai touch" it has, OFC a reinterpretation... u already know my Gold Frame & i have 1 Blue Frame 1/100 NG waiting inside its box, nice job there pal =)

Nice design and I actually like the blue/white combo colors.

I love the poses and make it look like he is ready to fire off a couple rounds.

Ooo.. Although this a basic variation of the Blue Frame, but I find it the most sleek looking of all its variations. XD

no matter what grade or size, the astray design is top notch!

>> Tachikawa
The Serpent Tail logo has given the Gundam Astray Blue Frame belonging and identity.

>> KazeTora
It's been a long time we haven't meet Kaza Tora san. That reminds me that I have previously blogged about your Gundam Astray Blue Frame.

>> Bianchii
Time wait for no man. Thank you for returning to my blog. Cheers!

>> chubbybots
Bro, are you referring to the Gundam Astray Red Frame standing behind at the 2nd last pic. I got that from CSC which was already built the painted.

>> on_o
Not really bro, I saw your HG Unicorn Gundam that is nicely built that's something that I don't think I could achieve.

>> chrismandesign
No doubt Astray's design is outstanding in Seed and better in MSV. 1/100 scale is great and to me it's the most ideal size. I hope you will soon work on it.

>> bluedrakon
Though I prefer Astray in red, blue and white seems well to me. Astray is nimble and hence it can do a lot of poses.

>> sl619
Undeniably true and this design earn Astray Gundam to even made in Perfect Grade even.

The figure is very poseable..

I happy that I picked the right Gundam for my friend.

Love the Color...
Blue and White is a good
couple of color...