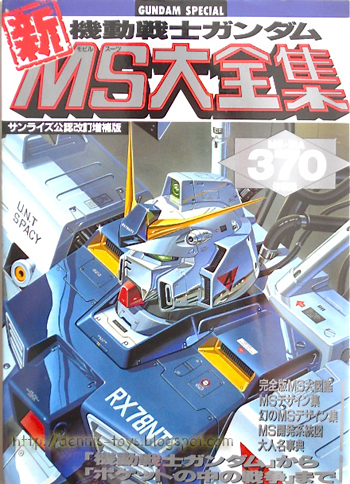 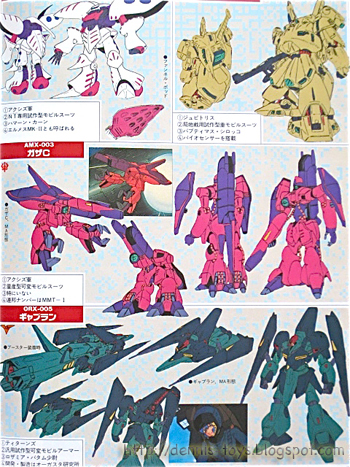 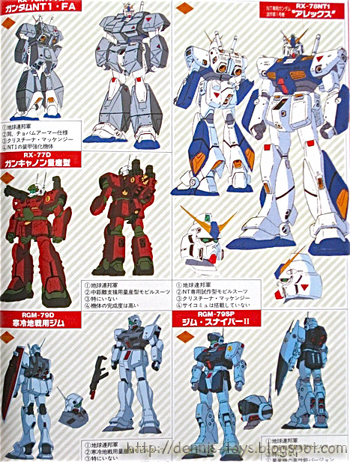 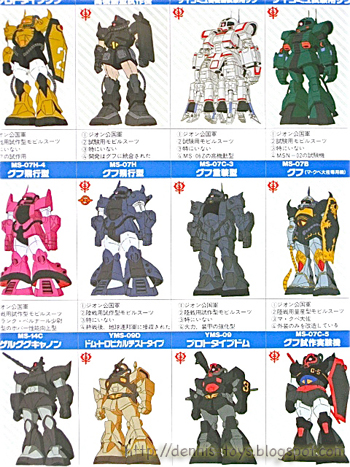 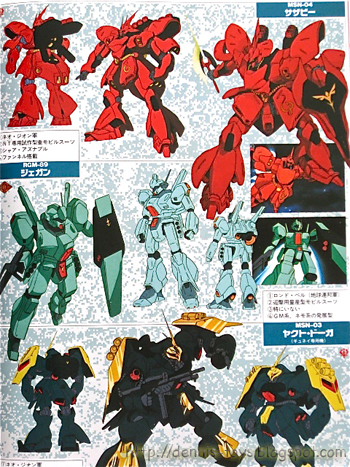 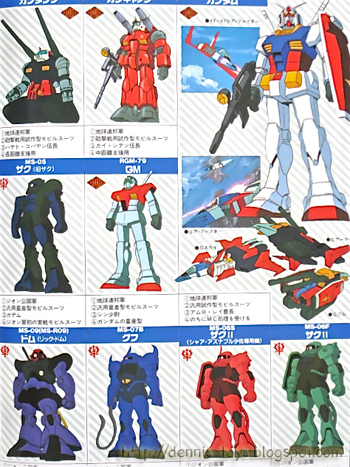 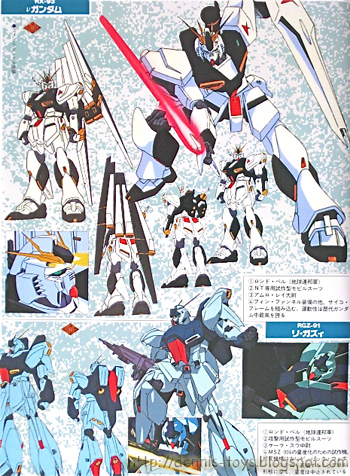 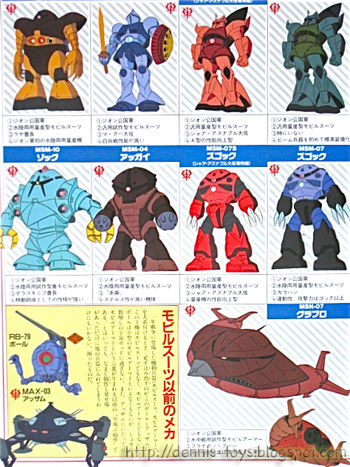 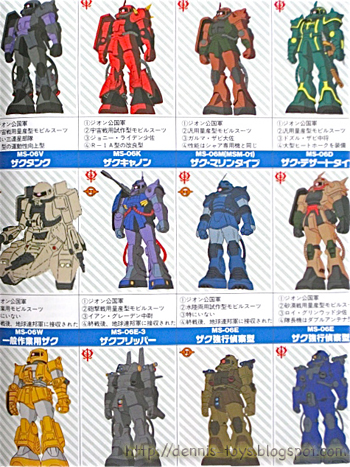 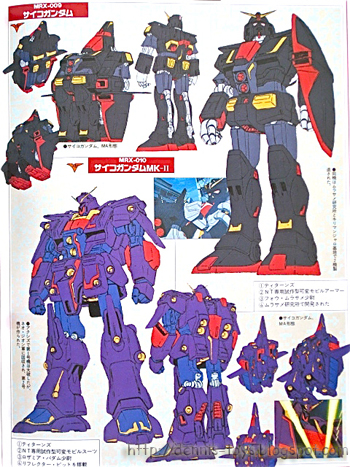 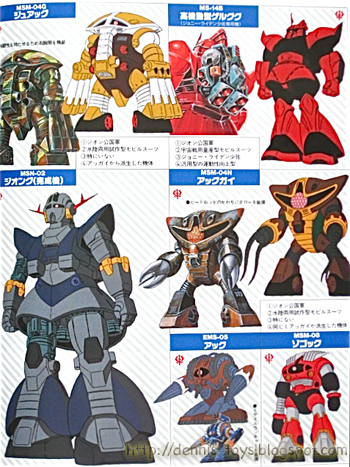 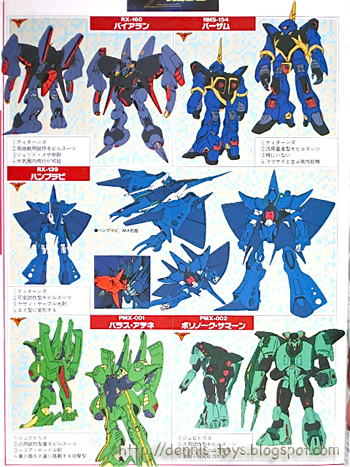 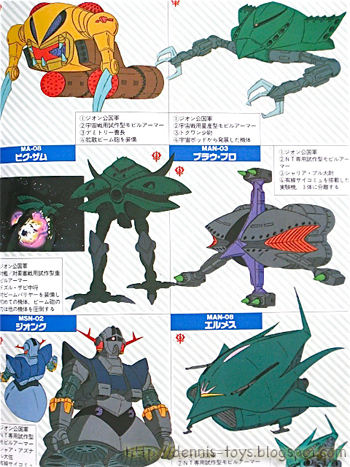 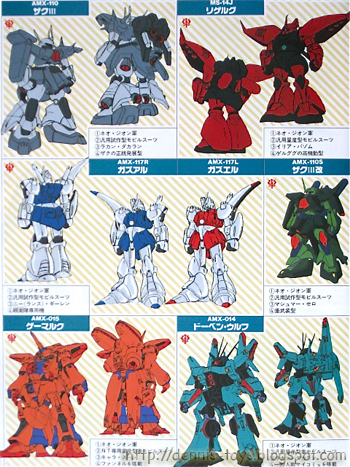 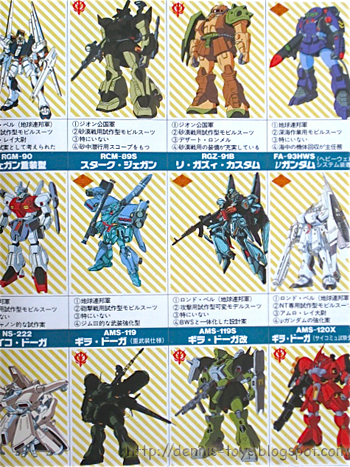 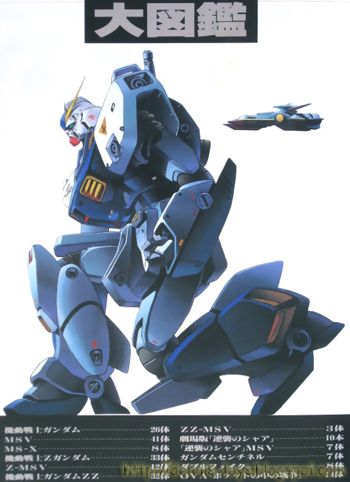 An old Gundam Encyclopedia consisting of 143 pages, found on my shelf with coloured pictures and sketches of up to 201 Mobile Suits during the Universal Timeline. MS ranging from those in conceptualization to manga, anime and even MSVariant. I can't find the publishing date but it was most probably published before 1991 because MS from Gundam 0083 and Gundam 08th MS Team were included. Like most Gundam illustration book, this was also printed in Japanese language. As you can see from the pics, the MS featured were drawn in an old-skool manner with a feel of nostalgia.
at October 08, 2011

Cool book, really shows what an incredable amount of mecha there in the Uiniversal Century and really dig the Alex artwork.

There's really a lot of MS been featured and so many that I could not fully cover the entire book.

Wow this book definitely a treasure for UC fans. didn't know Nu Gundam DFF had been around for a long time lol.

btw Deenis, if it is possible play Gihren's Ambition! you will get to see most of these shown MS in action.

there r many MSs i’ve never seen before, specially from the Zeon faction... some of them really look like the monster enemies of Ultraman or Godzilla LOL... & the original drawings of the huge Psycho Gundam... u still have hidden treasures in ur shelf & i now i appreciate even more the gashapons u gifted me, ’cause they’re very rare =O =D

I have always loved these art books as you get to see the Gundams and others in more detail.

>> Yami
It's a pity they kill off Amuro Ray from UC so soon in the past. I do have 'Gihren's Ambition' on PS2 but the starting part was difficult playing E.F.S.F, so I stopped after a while.

>> chrismandesign
Oh yes, some of those prototypes unit from Zeon that appeared only in manga do looked monstrous which condemn they was villain from their appearance.

>> bluedrakon
I'm actually selling it off for S$10/- on eBay. If you are interested, do drop me a mail. Could even give you as a gift. Cheers!

Nice! Thanks for sharing dude!

How awesome could it me if they made a translated version. They could earn so much more! hehe

The closest I knew about Gundam magazine been translated was Hobby Japan translated to Mandarin.

Following the newspaper had reported that "former employeechristian louboutin sale complaints Gucci hundreds of thousands of unpaid overtime labor supervision departments have accepted" after, Gucci (Gucci) is located in Shenzhen city of Vientiane's flagship store five employees to the "Daily News (microblogging ) "reporter broke the news Gucci has not paidChristian Louboutin Pumps their overtime, and said it would monitor the department of labor complaints.Contrast is a trained abroad have to Gucci employees told reporters that foreign employees in overtime pay has never defaulted on the situation, and being rich. In this regard, Gucci public relations department official said, "the company clearly states that, for state employees should be some overtime, the company will clearlychristian louboutin sale be distributed to staff. Gucci attaches great importance to the welfare of employees."
Reported a first half of 2011 Gucci Greater China revenue up 35.6%,Christian Louboutin Peep Toe Pumps as profit growth to support Gucci important fulcrum, Gucci also said that mainland China will increase in the speed shop. However, the company repeated in the mainland do not pay staff overtime and other labor disputes, is likely to drag on the pace of expansion of Gucci.Former employees of joint rights
To pay overtime costs for labor disputes, Chinese employees Christian Louboutin Pointed toe pumpsof Gucci and the war has been extended from Beijing to Shenzhen.