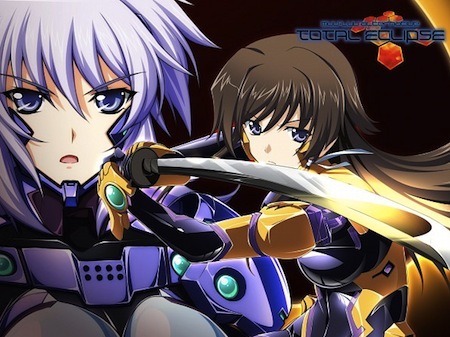 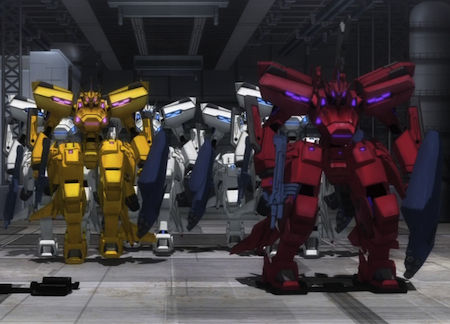 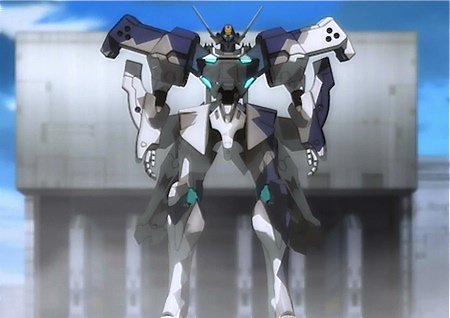 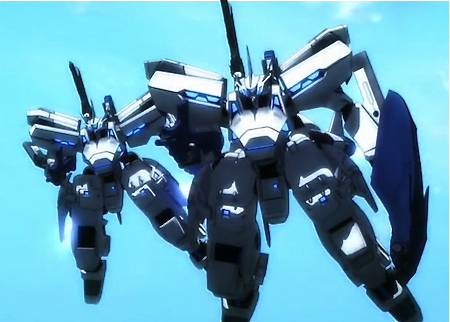 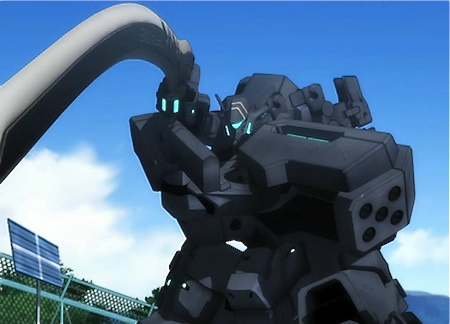 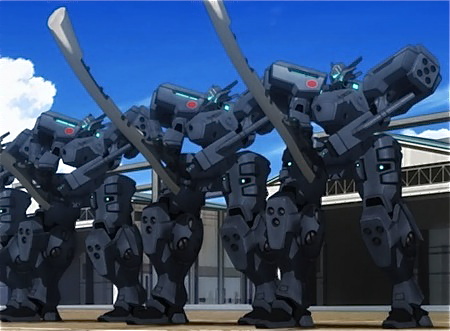 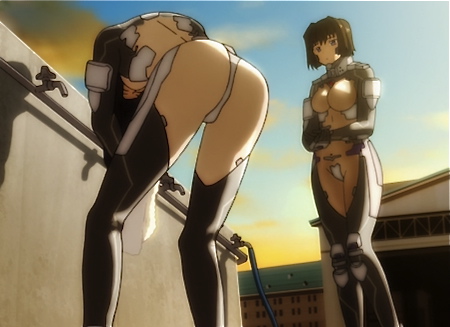 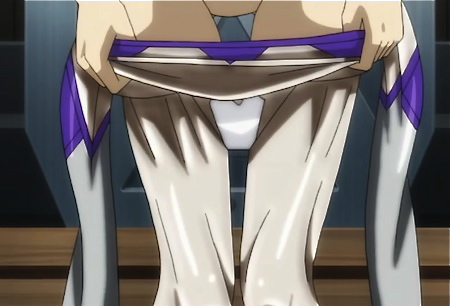 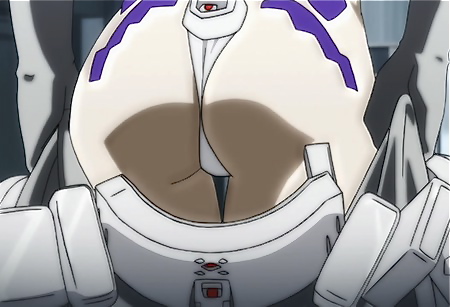 I have kept myself updated on recent episodes of Gundam Age and so I tried out other anime by watching Muv-Luv Alternative Total Eclipse, as recommended by Guy'A'. It's mecha anime is about mankind desperately defending earth from alien invading, a bit like Evangelion.  The first two episodes of Muv-Luv Alternative Total Eclipse, apart from the donning of plug-suits, it's super violent and gruesome all the way. Scary! Culture shock to switch from Gundam Age to this!

Damn serious fight with high standard of anime drawing took me by surprise. Totally from heaven to hell to think that this is an anime from eroge game origin. Aliens eating adorable gals are no fan service. Don't what other otakus would think?

Third episode introduced the whole team where the focus will be on. It looks like the anime got me acquainted to some of the characters then killed them off to make viewers on an emotional roller-coaster. Saddened me when such characters were axed off when I least expected. Totally dramatic!

Some really cool mecha were introduced in this anime and some had been marketed as Kotobukiya model kits and action figures in the form Revoltech. Really tempting.

Synopsis
Since 1973, an invasion of aliens known as BETA upon Earth is driving human civilization into nearly collapse. Facing an enormous mass of enemy force, mankind has developed large humanoid arms called as Tactical Surface Fighters and deployed them to its defense lines through out the world.

However, all those efforts could slow down defeats but could not stop BETA, and mankind is forced to abandon major area of the Eurasian Continent. For 30 years, mankind is bogged down in an endless war against BETA without any hopes of victory. In 2001, the Imperial Japan faces difficulties in the development of a next-generation main Tactical Surface Fighters (TSF) as it defends the front lines of the Far East. The UN has proposed a joint development program between the Imperial Japan and the United States as a part of its international mutual development project of TSF, the Prominence Project.

Yui Takamura, a surface pilot of the Imperial Royal Guards of Japan, is given responsibility for the project and sets off to Alaska. Meanwhile, Yuya Bridges, also a surface pilot of the US Army, was heading to the same destination.nnYet they never knew that their encounter would change their destiny drastically. This story with exciting human dramas and robot actions takes place in the development of a new Tactical Surface Fighters, the most important and effective weapons against BETA, at a crisis of human extinction.
at July 29, 2012

Wow this looks really cool! I've seen a lot of figures from this series but never looked into the anime itself. Although maybe I should avoid doing that or else I would want more toys LOL!

The Revoltech are still very much available but most of the nicer kits I saw online were sold out. Guess I'm a bit late to know the anime. So far there's only 4 episodes and still on going.

Agreed Bro, this is certainly not one for the faint-hearted.
In the episodes that transpired so far, I can only summise that beneath the series' apparant promise of fan-service and ultra-cool dog-fight sequences, lies a tale of sacrifice, mindless bloodshed and a tragedy so reveting that by the time you are halfway through the journey, a sickening wrench in your guts says "I want out!". However your sense of emotional attachment to the characters will leave you hanging on till the end while hoping that somehow, the characters that you have come to care about will make it through to the end alive. This is as close to an allegory of emotional blackmail in anime as far as recent productions are concerned. A throwback to the golden era of emo-animes like Neon Genesis Evangelion.

Been watch this 2, first 2 episode were a shocker with all the gore and it was censored so will be even more gruesome on Blu-ray.
Starting episode 3 it mellows out a bit.

>> on_o
Thank you for the recommendation, you truly poisoned me and that's again another solid comment on my post. Hard truth of the anime minus the spoilers. In fact, I had rephrased what you had told me about the anime when I put up this post.

>> Ant Sized Man
Glad that you follow this anime too! True that the gruesome and fan service would be a lot improved on Blu-ray after taking away the censor. Just watched the third episode and indeed the setting toned down.

by the plot you’re mentioning, i would say that Evangelion has some similarities but some differences as well... in addition to the psychological component of Evangelion, there are some religious issues in the story which i guess are not present in Muv-Luv... the "mecha" solution against the threat which is trying to bring humanity to extinction and the disturbing scenes are for sure something in common... now that you triggered my curiosity, i will search for this series... =)

I almost missed this on my radar for new anime. I am catching up on the episodes, but WOW.

Not too keen on the story (kind of wacky), but the mecha and hot chicks drew me back for the action.

>> chrismandesign
The similarities to EVA is the plugsuit and invading alien. The alien attacks in mass number unlike EVA and the TSF (Tactical Surface Figher) are almost the same size as Gundam MS (Mobile Suit). You are right this anime not associated with any religions explanation and that you had correctly described the anime without having watched it.

>> bluedrakon
I'm with you pal! Ready for action due to the mecha and hot chic! I serious find the Shiranui 不知火 Type-94 United Nations version awesome and now hunting for it.

Ahh its the unresistable poison always. I fear watching new anime as it always makes me itching to spend $$$ on its merchandise/games etc...

Another anime series that I did not watch before :)

>> on_o
Bro, I'm more fearful in this aspect. I'm helpless but to jump into the merchandises after watching anime or movie I like.

>> deSMOnd
Can understand bro that you more of a movie goer. Your weakness is movie replica. Ha! Ha!

Most of the casts from the first 2 episode of the anime are intentionally killed as gruesome as possible since the original series setting is just that Grimdark(even more i think). Though you won't see much Gore in Total Eclipse later on since this Muvluv series focus more on the mecha stuff which some people calls it Muvluv version of Macross Plus.

Other than Kotobukiya plamo and Revoltech, the Muvluv series got some action figure by Volks called Volks A3 which you can check it out Dennis.

Thank you for the valuable information. You are kind of right that at episode 3, the setting bellow to test-pilot kind of setting alike Macross Plus. The mecha such as Shiranui resemble a little to VF-0S in Battroid mode. I'm Shiranui Type-94 Vanguard UN version, Kotobukiya kits, to my toy budget next month. Hee! Hee!

I would surely love this anime.... mecha and pretty girls = awesome combination!!!