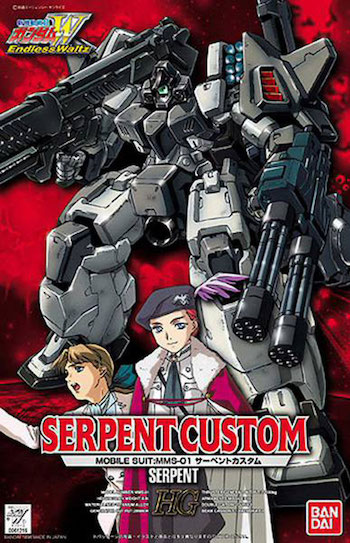 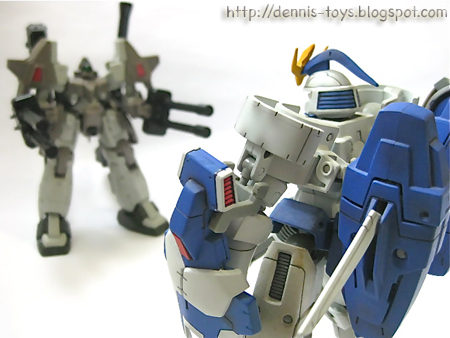 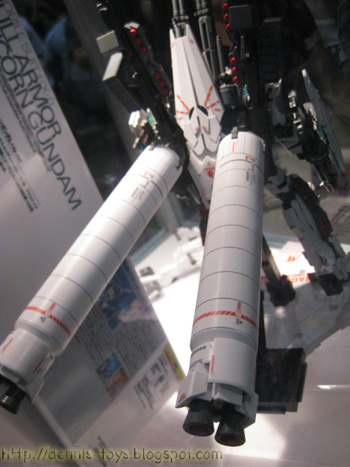 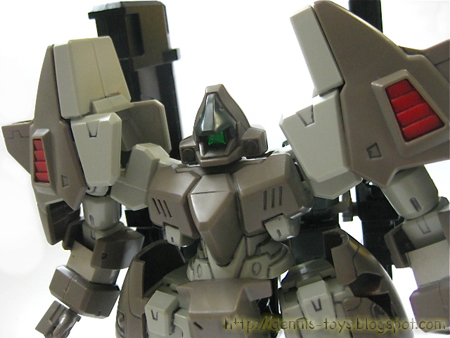 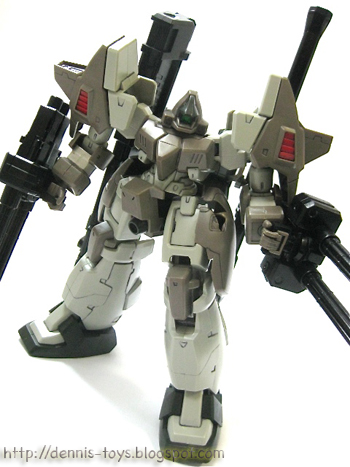 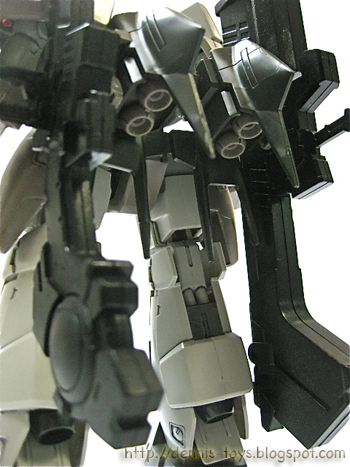 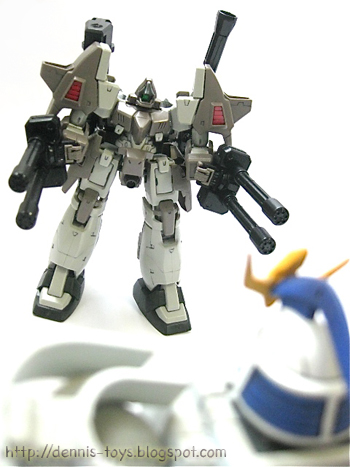 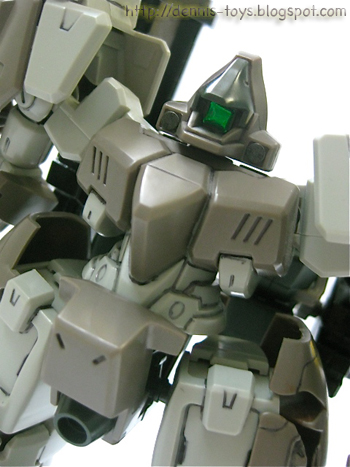 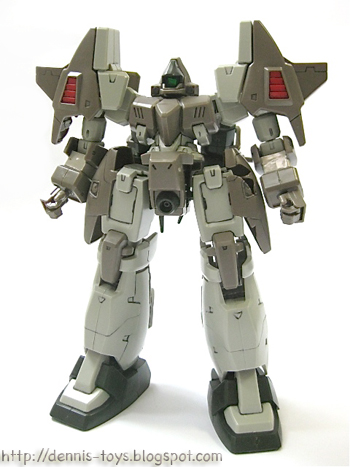 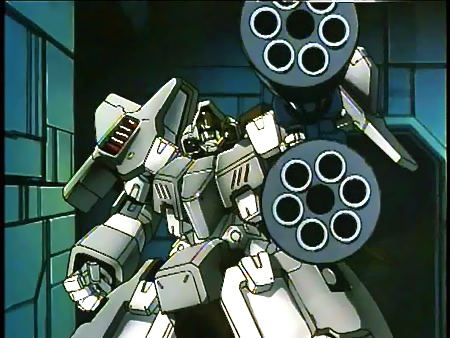 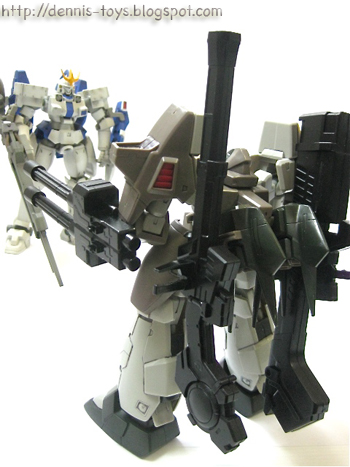 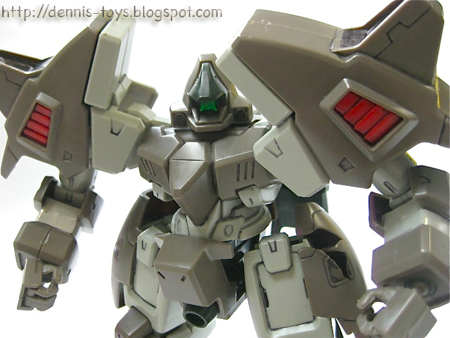 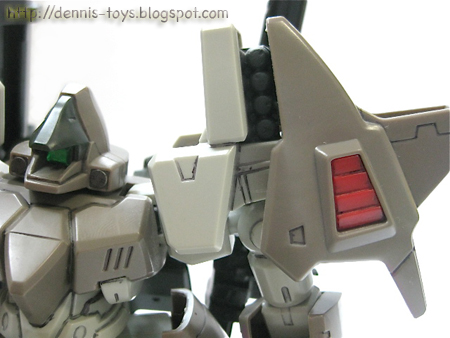 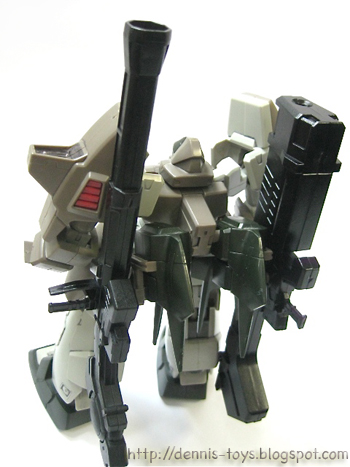 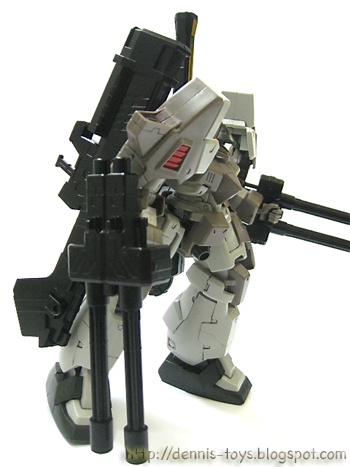 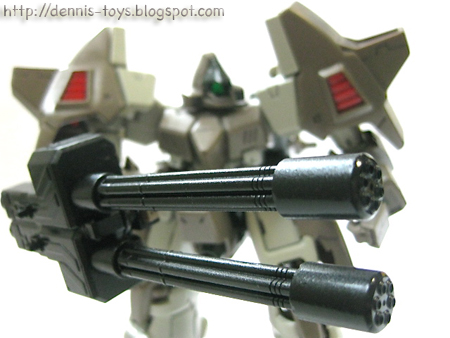 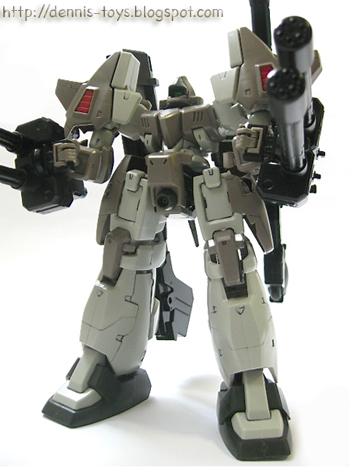 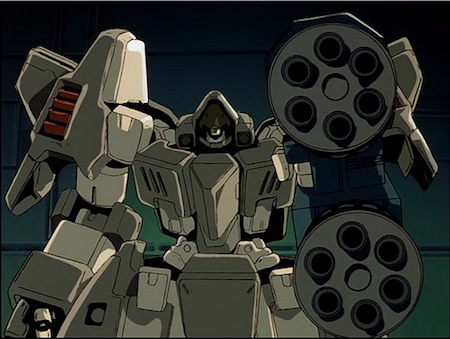 Serpent Custom appeared as the most advanced grunt units in the OVA Gundam W Endless Waltz with almost impermeable defense against the Tallgeese III and the Gundams. Built with toughness like tank, Serpent Custom equipped itself with double-barrel gatling guns in both arms, just like the ones Heavy Arms Gundam Custom is having. With its stout built, Serpent Custom could carry weapons, deemed too heavy from other MS like the bazooka as well as beam cannon attached to the backpack even under the force of gravity.

For a non MG grade, this 1/100 scale is an ideal size in projecting the hunk of Serpent Custom. The dull khaki colour scheme of the MS give it a raggard look, very close to the anime appearance. Some minus points are that the plastic quality seems inferior with noticeable gaps when the parts are snapfitted and mine came with left thigh & shoulder armours not molded properly (Some plastic putty on the joints would solve the issue). The head rest flat on the body rotating 360 degree but have difficulty tilting up and down.

The shoulder armour can slide open for missile launching and despite the bulkiness of the shoulders,  the well designed joints between shoulders and arms, gave a lot of articulation. The legs on the other hand, lacked articulation hence kneeling pose is not possible. The legs also hang loosely in mid air when held up. There ain't many parts so the snap-fit so this process should be quite a breeze. The pics above are just straight build of the kit with panel lines drawn and weapons sprayed black. Minimum touch  up because I intend to change its colour scheme to blue/white scheme alike the Sangokuden BB Xu Huang Serpent Custom.
at October 25, 2011

this must be one of the best grunt unit designs i’ve seen in Gundam series (the little i know about it) and precisely because it comes full of big weapons for both close and ranged attack... i remember that despite its great armor, they were easily destroyed for Gundam units, what i found quite disappointing... it’s the first time i see this NG 1/100 Serpent Custom and of course it looks different to the HG clear version i own... i really like this camouflage color scheme =)

Anything with a dual gatling gun is awesome. This is a very cool grunt unit like you said, the best so far for the series.

>> chrismandesign
Not the best designed grunt unit compared to the GM to me but one that's was given a good design. Though they could not match the Gundam, will sheer number and pouring shots, they were able to put up a strong defensive line. They are clearly stronger than Leo units.

Glad that you like this unit a lot & owns the HG clear version. The colour would look very camouflage and well suited for desert.

>> bluedrakon
It's true that the dual gatling guns makes the MS really awesome. Those big guns mounted t the rear makes it even more fierce looking. The weapons will make anyone go trigger happy! Ha! Ha!

What caught my eyes bro, is the Tallgeese facing the Serpent. It seems that there is an airbrush-like quality to the Tallgeese! Did you level up ur Gunpla skills secretly in the mountain these days without our knowledge!?

Ha! Ha! My Gunpla skills are still stagnant. That 1/100 Tallgeese you saw is not a model kit but an action figure from 'Gundam Arch Enemy' toyline. The paint works of the toy is truly remarkable.

Hey are those gatling gun's design the same with the Heavy Arms'?
Maan, I want an MG of Tallgeese hahaha. :D

I didn't have a HG 1/100 Heavy Arm Gundam Custom but from design, those gatling guns sure look the same. So far, there's no MG Tallgeese yet. You could settle with a HG 1/100 Tallgeese III like me cos the kit has optional parts to convert it to either Tallgeese I or Tallgeese II. Bandai had put emphasis on Tallgeese with the release of Robo Damashii. I suspect MG Tallgeese could be next in line after they finish off with those MG Gundams from W series.

long ago when I familiarized myself on gunpla, I bought the bootleg ones in 1/144 scale. Although the detail wasn't awesome as 1/100, but this grunt MS wins my heart :D .... My local store sells heavyarms custom 1/100 bandai for MYR80++

I also have the 1/144 version but I like the size of a 1/100. Mote of a personal preference cos I naturally like bigger toys. I realized recently, a lot of Gundam W kit had been reissued.

Oh yeah. This big nice dude was my 1st Endless waltz model which I got for myself for me Christomas Present.
Can never forget how the beauty of it when I had it you and fixed and fully armed oh the feeling...

Trying to see how I mix and match my 1/100 Serpent with my 1/100 Gundam Leopard D though. Since they're kinda close to match extend.

Agree Dennis. After the Sandarock Ver. Kai, would be Trowa Barton's Heavy Arms. His new Gatling cannon looks sick with the ammo chain linking from his back to the gun.

I can really feel the sentimental value of this kit to you especially when it's your first Endless Waltz kit you got yourself as Christmas Presento... Mixing & matching the parts from another heavily armed MS must be really fun. Spraying it with a fresh coat of paint over customised MS can also be awesome.

Wow!! so many Gundam figures you scored..Enjoy bro!!

Ha! Ha! I'm definitely not the top scorer compared to you. Lol...

definitely one of my fav grunt units (no offence to the zaku-dians)^^
MG treatment is in the foreseeable future for this dude as all of the MGs from Wing series are coming out one by one.

Zaku still remains as an irreplaceable grunt unit that lives in the hearts of many Gundam or perhaps Zeon's supporters. One MS from Wing series which I pray would be released as MG is none other than Tallgeese.