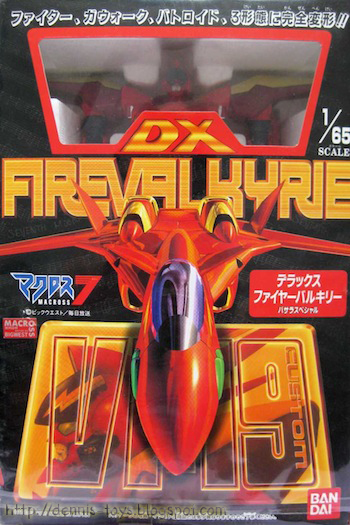 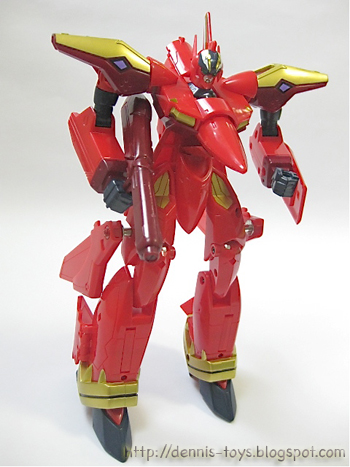 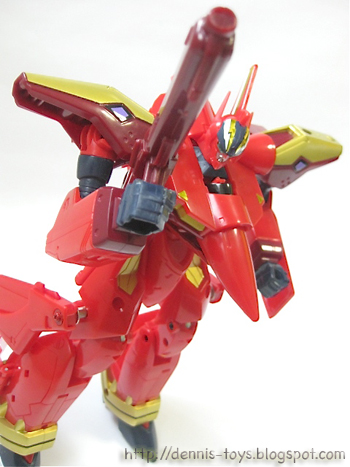 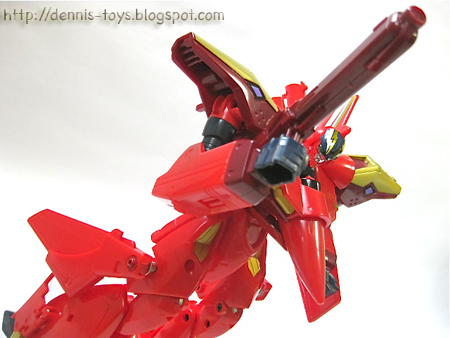 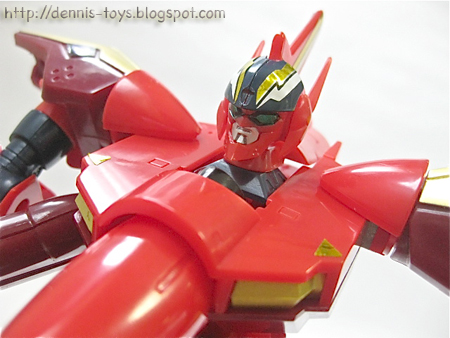 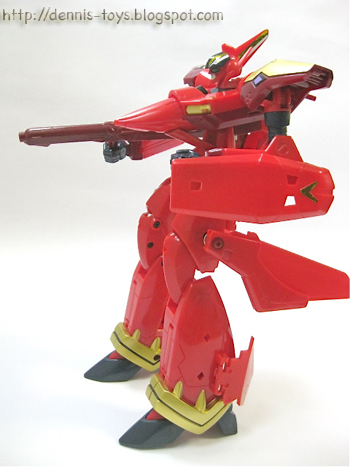 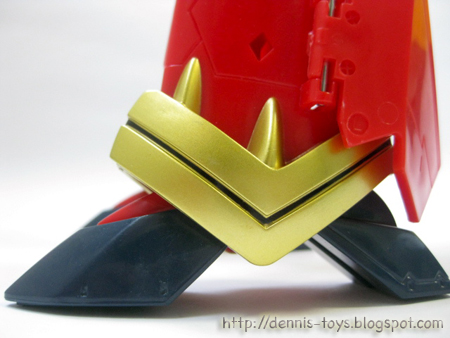 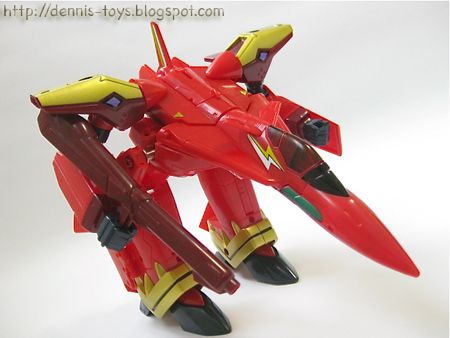 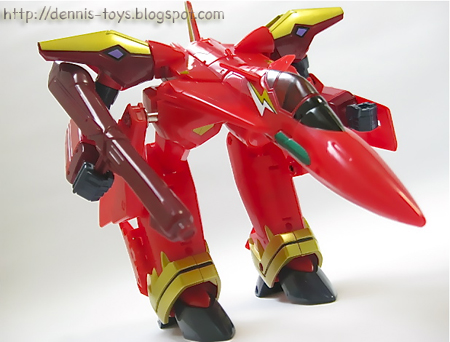 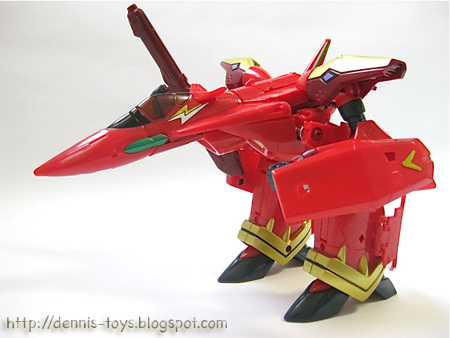 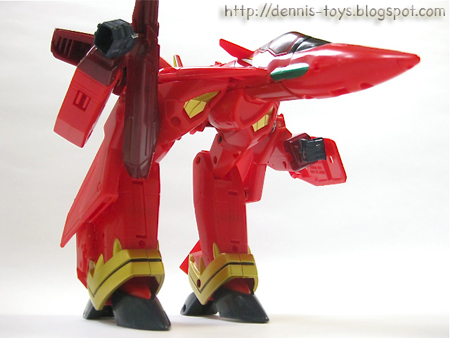 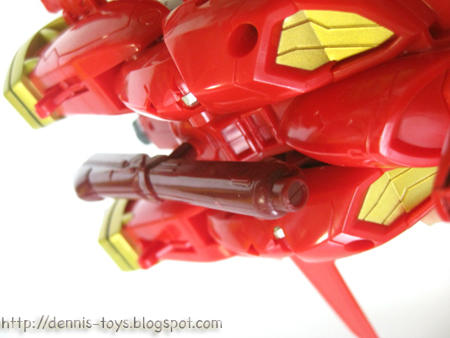 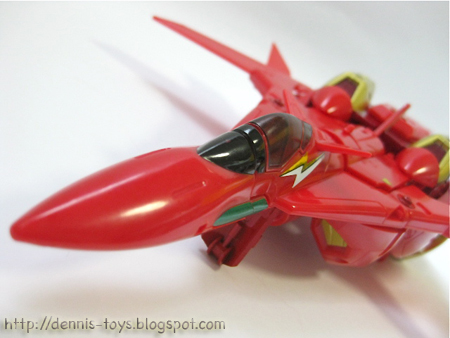 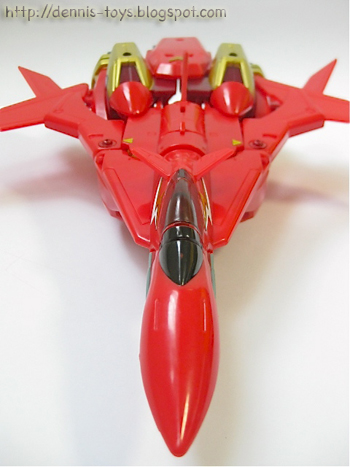 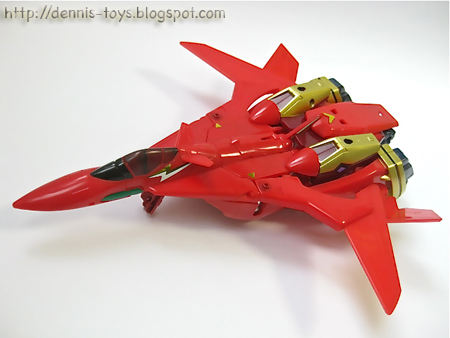 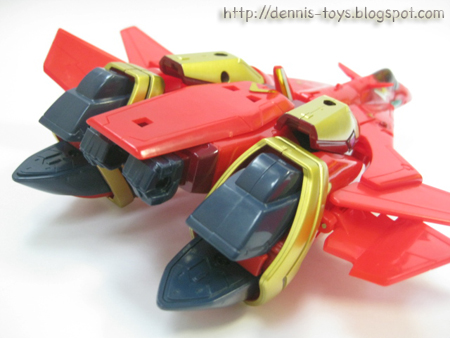 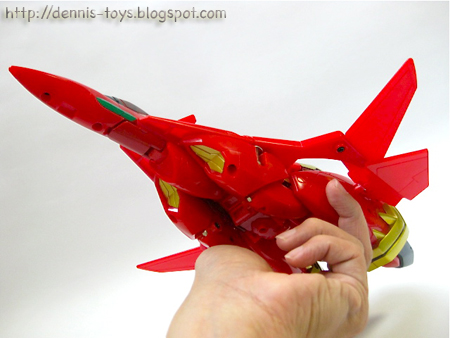 A re-post of my '1/65 Macross Fire Valkyrie VF-19 Kai' when it first made its debut on "Collect 'em ALL' back in December 2008. This time round, I have again taken the toy out of the box, applied the stickers and retaken the pics. Let's take a relook of this vintage 1/65 scale VF-19 Kai aka Fire Valkyrie manufactured by Bandai in 1995.

Remarkable toy that was made in Japan with high QC level which despite the age, the plastic still remains gloss with no tarnish on the chrome area till today. The joints are tight and the toy still stands sturdily even in gerwalk mode. The transformation process of this toy is much of an ease whereby you don't actually need to refer to the instruction manual. Made with simplicity, the shield on the left arm can't be removed and the only accessory is the rifle. Rifle can be attached to the underside when the valkyrie is in fighter mode.

In my opinion, the valkyrie looks best in fighter mode. Alike the VF-1 valkyries, the arms & legs go to the rear in fighter mode. I think the toy as a whole would be nicer if it's made with more details. Details on the landing gears seems lacking. Not to mention that the toy is built for easy handling and target more towards children.

The VF-19-Kai "Fire Valkyrie" is perhaps the most unique mecha in the entire history of the UN Spacy. It was designed and built by the advanced design teams of the Macross 7 colony mission and was intended primarily to serve as a psychological weapon in case of war against unknown alien races.

The designers of the Fire Valkyrie had two purposes in mind; first, the fighter would serve as a rallying point for the civilian populace of the Macross 7, and could help to boost morale in trying times. But second and more importantly, the Fire Valkyrie could be used for "culture" warfare in case the ship encountered an enemy similar to the Zentraedi who had little prior experience with Earth customs and sensations.

The Fire Valkyrie was given to Basara Nekki, a civilian and talented singer aboard the ship who was a devout follower of Lynn Minmei. However, the designers of the craft underestimated Basara's brashness and impulsive tendencies. When the Macross 7 first encountered the Varauta, he began using the Fire Valkyrie to distract combatants on Both sides in an attempt to disrupt the growing war. An extreme pacifist, Basara believed that he could stop the Varauta/Macross 7 conflict by singing and exposing both sides to "culture". Although his original plans did not work, Basara did stumble upon one of the most important discoveries of the war; the Varauta respected music and culture because they generated Spiritia, and spiritia energy was the prime substance that they sought when attacking the Macross 7.
at October 29, 2011

Great piece of VF-19 Kai you have here! The battroid mode looks raelly fearsome yet charming~! Hope you manage to find the rest of the 1/65 series.. http://www.macrossworld.com/macross/toys/_toys_bandai.htm

I don't have the chrome version, but I don't think I will buy cos I prefer the original colour.

A great article indeed and a very detailed, realistic and superb analysis of the current and past scenarios.
cctv karachi

Many thanks for creating the effort to talk about Macross, I feel strongly about this and like studying a great deal more on this topic. If feasible, as you gain knowledge, would you mind updating your weblog with a great deal more details? It’s really useful for me. I just ordered these consoles at PIJ! I’m excited! I’m going to have these in week! http://bit.ly/wNFdeA

Good but in fighter mode the the big wings need to be under the little wings if the legs.So you need to put the legs higher

>> Castor2552
Thank you for the heads up pal. I have a lot to learn and hopefully be able to retake and update the pics on this valkyrie ^_^