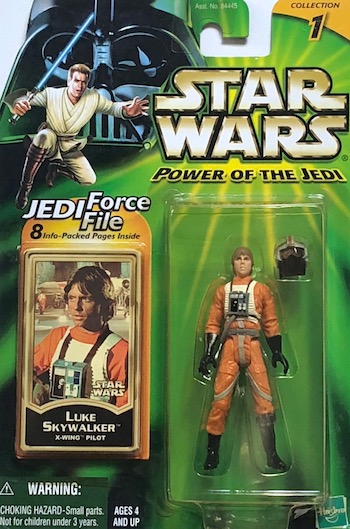 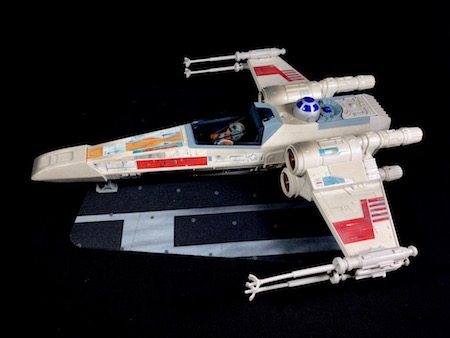 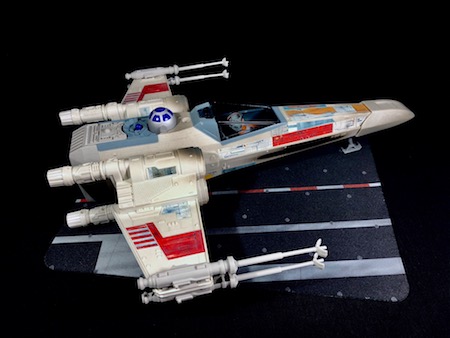 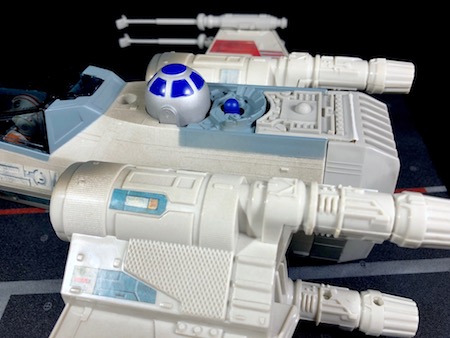 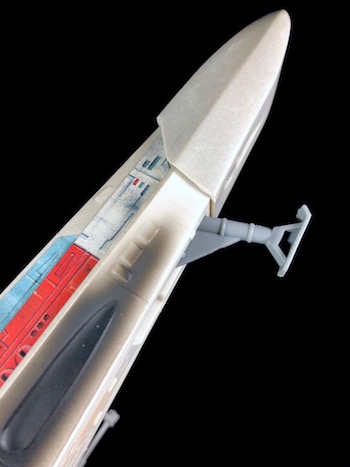 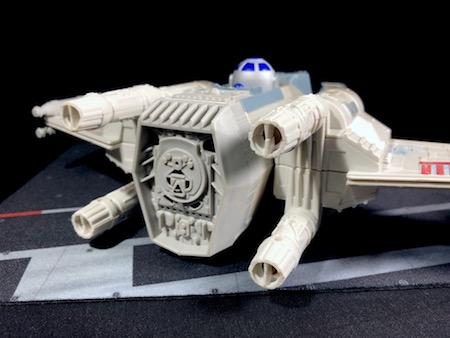 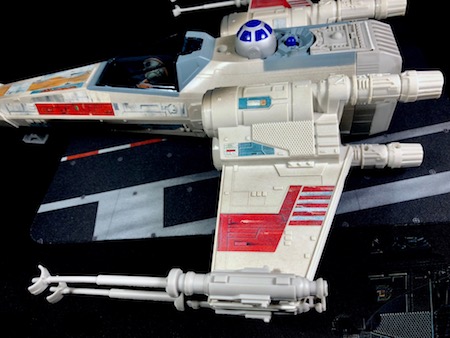 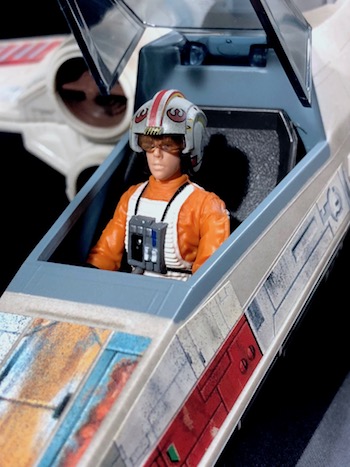 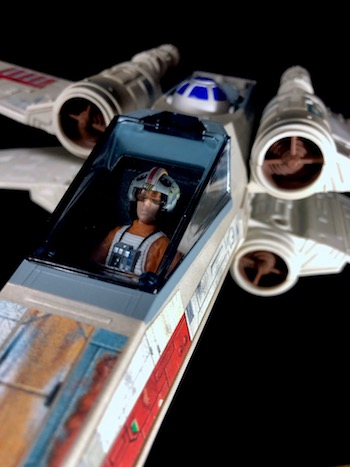 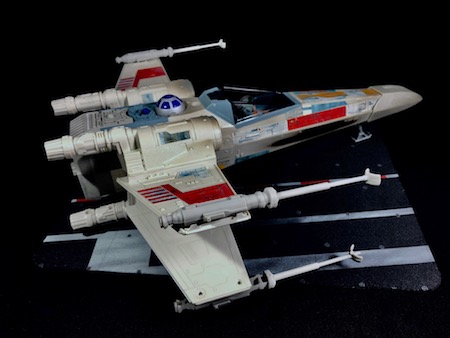 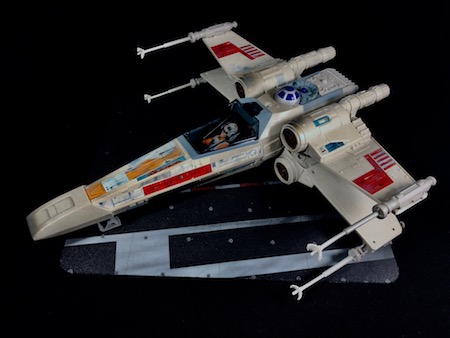 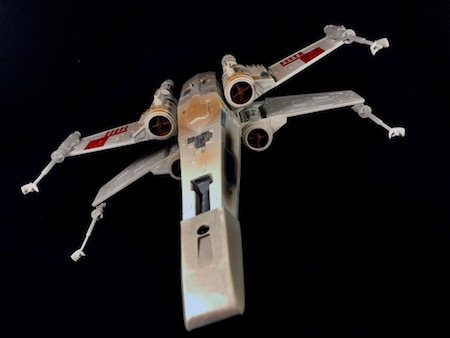 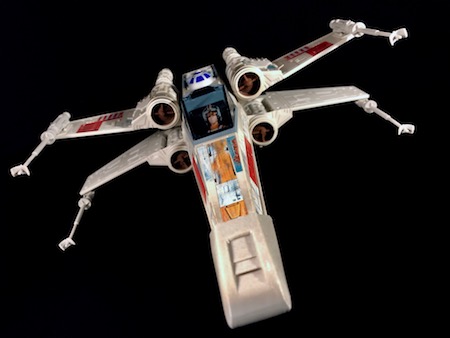 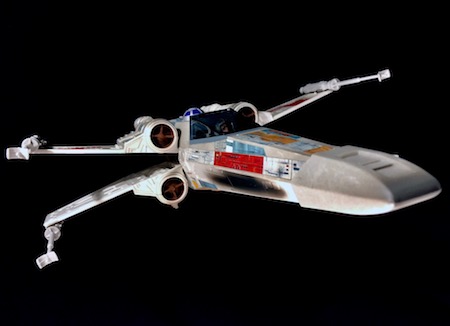 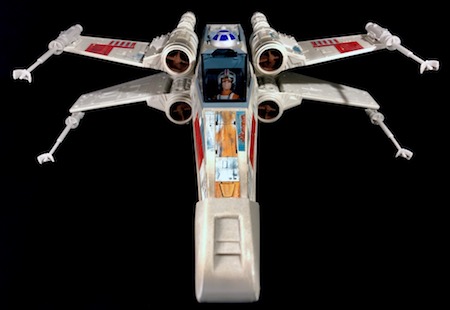 Red 5 to Red Leader... Katsuden is hot on my tail and have lock-on to my X-Wing Starfighter for is review. Here we have ‘The Power of the Force Electronic X-Wing Fighter’ which is more of a toy for younger children with plenty of gimmicks. The toy is not so much to scale as the X-Wing Fighter seems bulkier and has shorter wings. Not so ideal for serious collectors as stickers are needed to be applied to compensate the lack of details on the plane’s exterior.

The cannons on the wings seem wrongly positioned horizontally instead of vertically. Nevertheless, I like the toy for the gimmicks such as the retractable landing gear, when you down R2-D2 ... the X-Wing Fighter spread its wing to X (I think this is how the name of the Starfighter derive from) attack formation for increase maneuverability. Not only so, the X-Wing Fighter produces a roaring engine sound. When pressing the small button on the rear bottom of X-Wing Fighter, the toy produces a laser shooting sound, just like what you hear on the movie.

Figure not included in the box so I bought a Luke Skywalker figure in X-Wing Fighter pilot suit under the ‘Power of Jedi’ series. A cool gimmick of the figure is that the pilot helmet is detachable to be held on Luke’s hand. The printing of the helmet is also very sharp, however there is not strap on the helmet. The head sculpt is fairly accurate to the young Mark Hamill, after I scrapped off the excess white paint on the mouth, otherwise the Luke will be Bugs Bunny. Lolz..

More awesome news is that the 3 ¾-inch Luke figure fitted perfectly into the cockpit! Luke first gets behind the controls of an X-wing fighter in the Battle of Yavin. Using the Force in the attack against the Death Star, Luke takes a critical shot at the battle station's reactor core. Luke's flying experience comes from racing his T-16 skyhopper through Tatooine's desert canyons.

Luke's targeting abilities and trusting the force have brought decisive victories for the Rebels. Yavin was a victory for the Rebel Alliance, and established Luke as one of the greatest starfighter pilots in the galaxy! The T-65's double-layered wings of X-Wing Starfighter, open into "an X formation for combat.Its four laser cannons can be fired simultaneously, in sequence, or in pairs. Luke's insulated helmet is equipped with protective eye lenses and hearing shields.

R2-D2 an on-board X-Wing, astromech droid serves as a vital component of an X-Wing Starfighter R2-D2 's constant technical adjustments sure safe flying for Luke. X-Wing Starfighter carries life-support unit in the event if pilot ejected from his X-wing, Luke's life support unit will keep him alive and transmit a distress signal to the Rebel fleet.

The Kenner company sold its Star Wars Power of the Force (POTF) toy line between 1995 and 2000. In 1978, the 3 ¾-inch Star Wars figures transformed the action-figure industry till today! Goes to say, some things never change... May the force be with you!

I used to have this in the 90s and I think I got it not more than 50 SGD in retail then. Ended up given to a old friend of mine. Good video you made.

>> Leon
U truly are a generous person and thank you for the recent gift as well too! Mine is the reissue version still it is a fun toy to play with : )

Bro, you are slowly into youtube video..keep up the good work!!