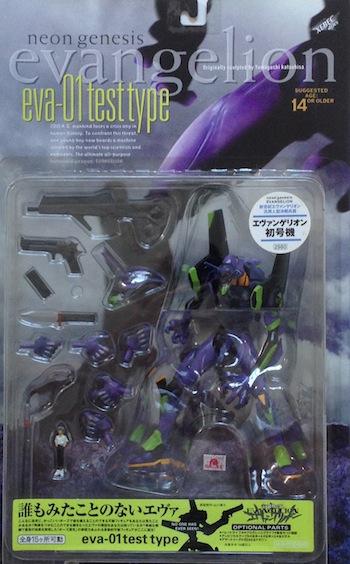 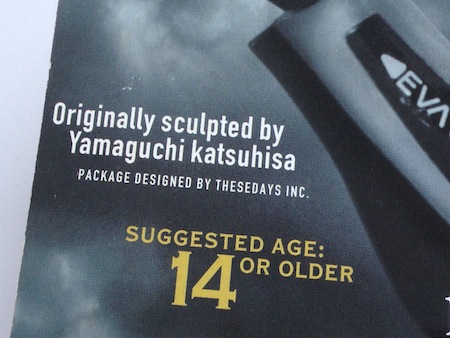 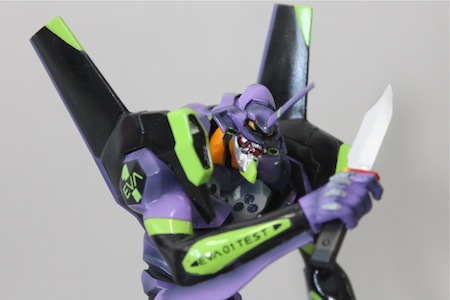 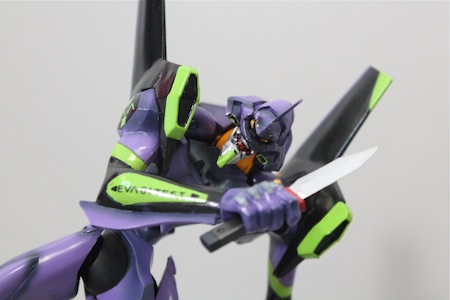 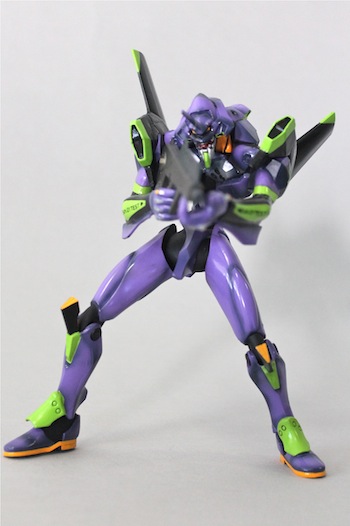 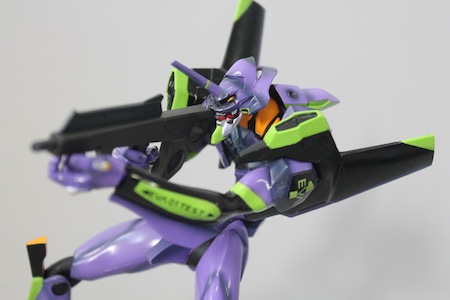 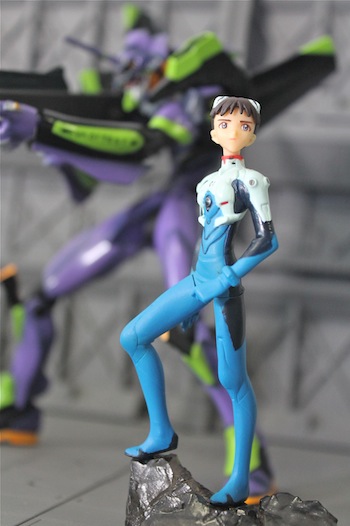 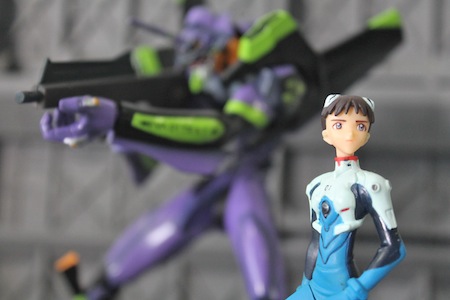 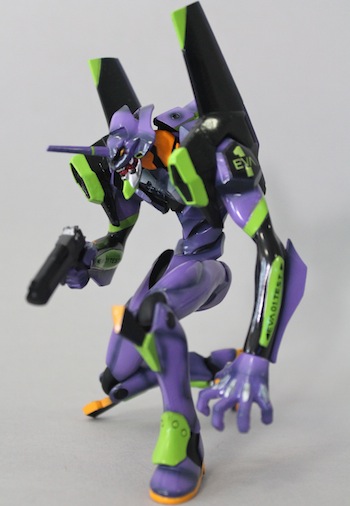 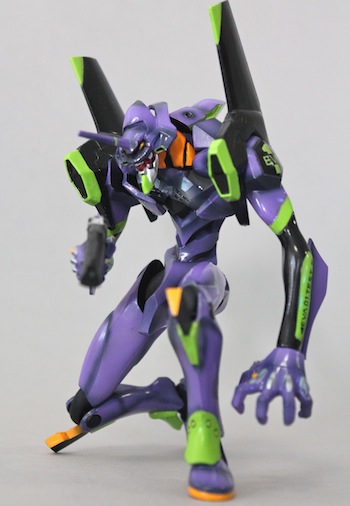 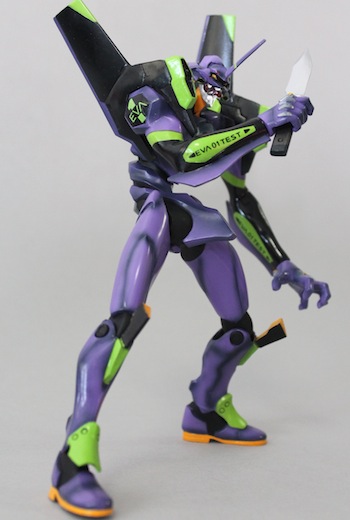 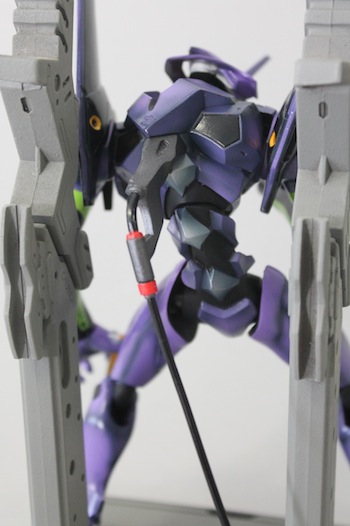 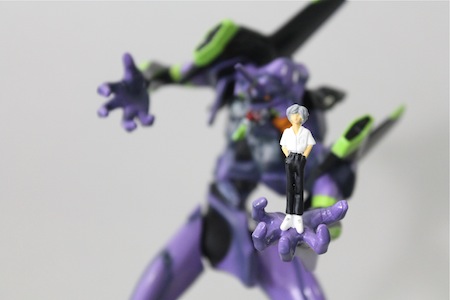 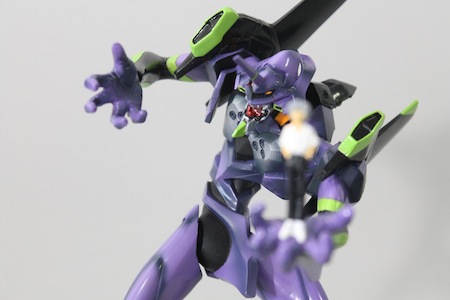 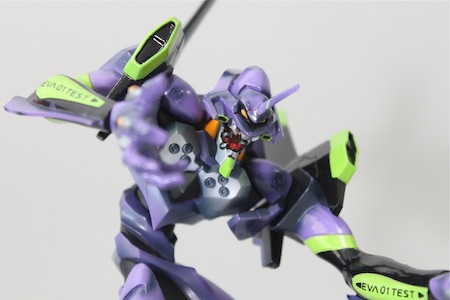 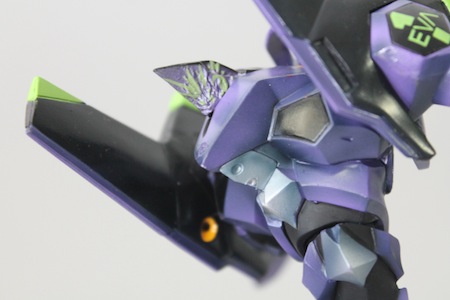 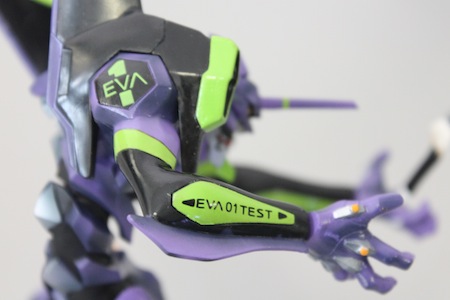 Deluxe image of Evangelion Neo Genesis, Unit-01 Test Type figure manufactured by Kaiyodo XEBEC Toys, sculpted by Katsuhisa Yamaguchi. For mecha design during the 90s, it was bold and ahead of its time. Not many mecha dares to take on the purple colour scheme and the green certainly is neon even under normal lightings. Weathering effects or shadings along those intricate trim lines had as added more contours and realistic feel.

Approximately 8"-10" (taller if not for the hunch), Xebec toy line by Kaiyodo seems like the predecessor of Revoltech in a bigger scale (which is a better size IMHO), pay more attention on the sculpt and vivid paint job in particular. It's also one of those few Neon Evangelion figures that come in such huge blister card Blister card 17.5" x 11". Kaiyodo certainly put smiles on those having this figure with an incredible range of arsenal from machine gun, magnum to melee weapon (dagger). Exclusively to Unit-01 Test Type Xebec Kaiyodo, the set come with a miniature figure of Kaworu Nagisa. It's pretty small so I kind of figured it out from the hair colour, the attire and the pose.

Interchangable hands, heads and plug cable were included as well. One of the drawbacks in would be the limitation in posing due to having only 15 points of articulation. The pose is mainly restricted to wide legs apart stances though kneeling poses are possible. Another flaw would be the figure's tendency of falling forward, blaming the unbalance center of gravity. Nevertheless, it's a great figure and the details kind of make up for it ^_^
at November 28, 2014

i think i saw a few of these figures available in a specialized collectibles store years ago and yep, these were the ancestors of the Revoltech figures, but the improvements were so extensive, that you can hardly say this "echelon" is part of the evolution... nowadays these figures are really hard to track in the market... despite the lack of the extraordinary level of articulation of the recent Revoltech, Figma and similar counterparts, they look great displayed !!!... =)

I like this series a lot and like it more than the revoltech for good reason like it's accessories, the bigger size & certainly the finishing. Still, I favourite remains with the model kit.

Oh yeah, the miniature Kaworu is quite the novelty. Came across the news on Transformers MP-10 Evangelion and wow it's truly exclusive!!! ^_^

I guess he is one of the popular robot characters in Japanese anime market :)

Oh yeah! Evangelion is like a pop culture mecha anime thats still rocking the world with 3.0 OVA. The anime set a new standard of mecha display and it has some of the most sexiest female pilots.

whats the difference between revoltech except size? Does it have same articulations? Im planning to get this soon. I'd love to know your opinion first.