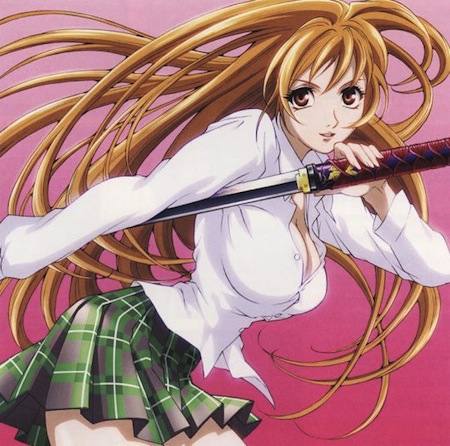 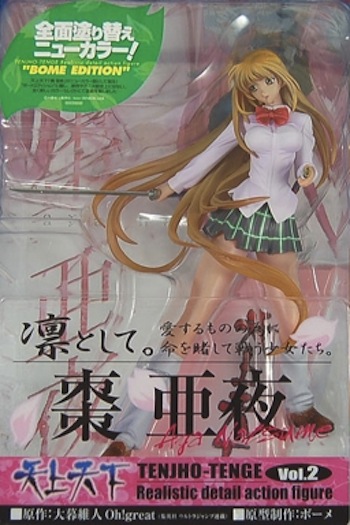 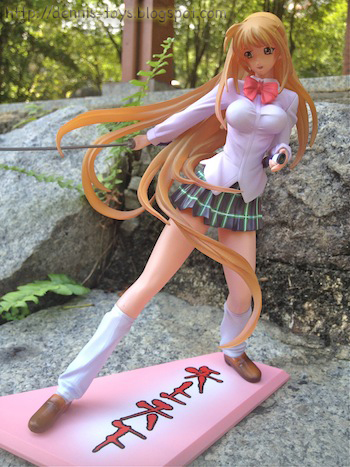 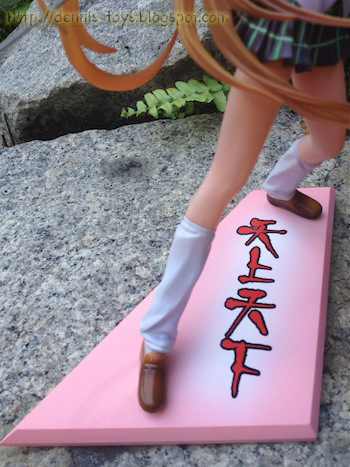 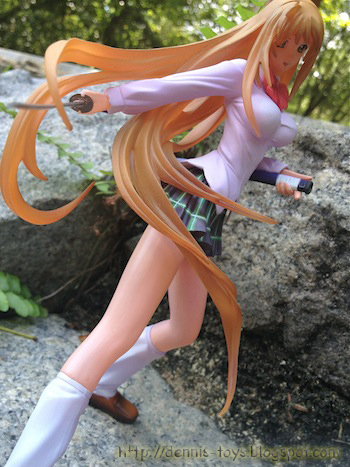 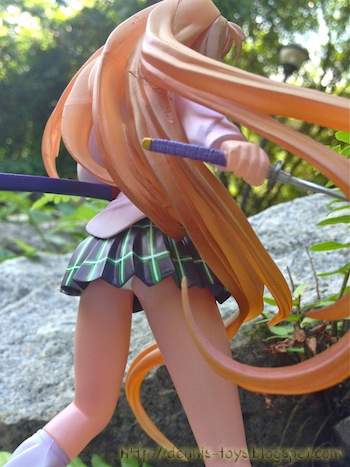 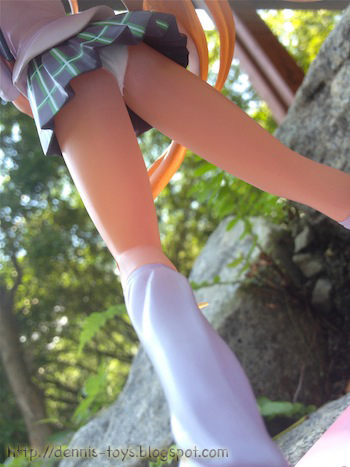 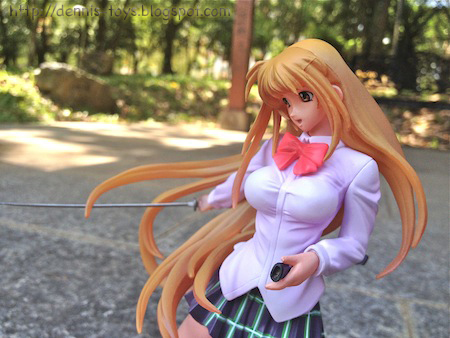 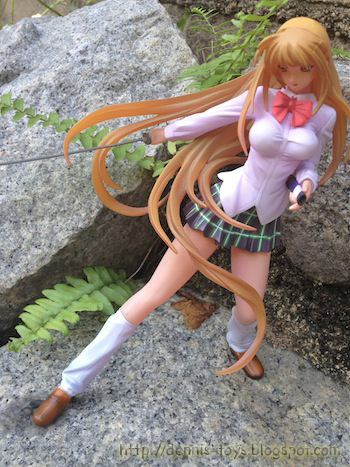 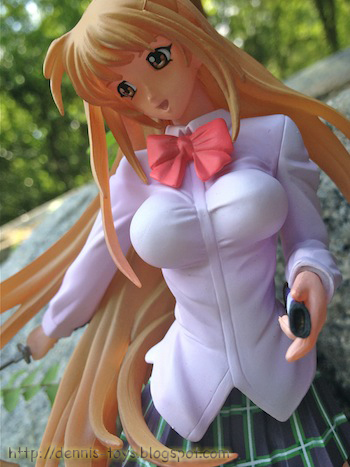 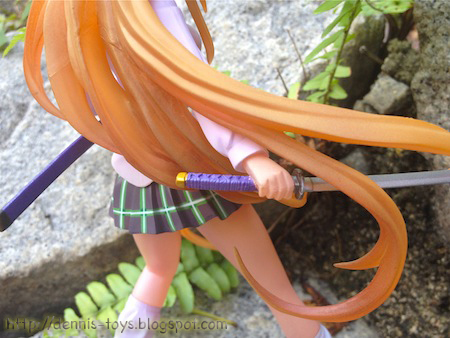 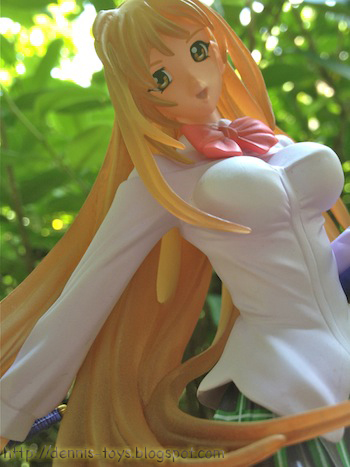 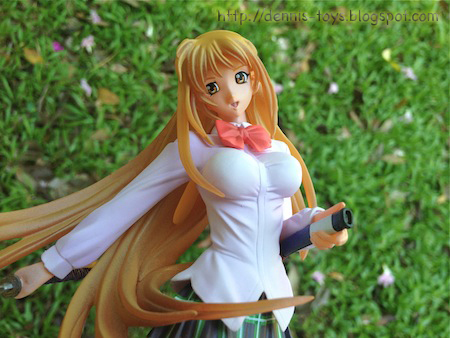 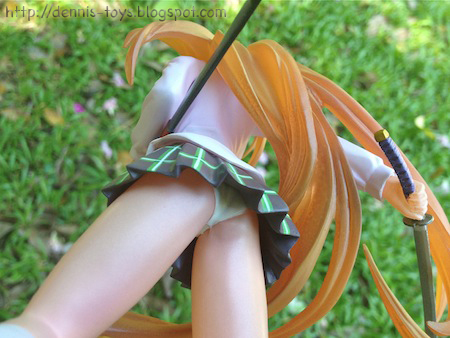 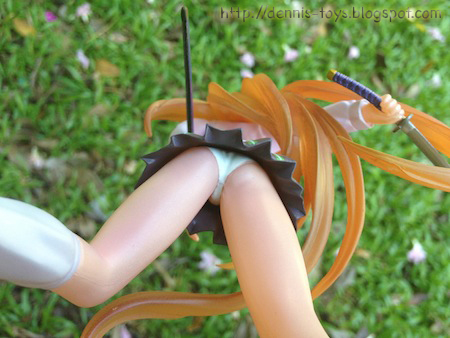 It started off having the fixed posed variant figure of Aya Natsume with black hair. Thereafter, I wanted the original production that is closer to the anime. Still the same pose of Aya Natsume from Tenhjo Tenge, drawing her katana in school uniform, in an original paint scheme was designed by sculptor/designer Bome.

A well made figure with much likeness to the Aya Natsume in anime, the heroine with the impossibly small waist and incredibly big boobs. Often feeling inferior to her elder sister, Maya Natsume, at some point acted in a clumsy way. Aya might be perceived weak in the anime but when she subconsciously awakens her dragon eye, the powerful would be vicious and devastating.

It’s a non-articulated PVC figure that is similar in scale and quality to the other best sellers, released by avex mode X KAIYODO . The figure stands approximately 8” tall with base with Japanese/Chinese character of Tenjho Tenge 天上天下, in blister card packaging. Even without the stand, the figure is able to balance on its own.
at September 29, 2012

wow bro you open her as repaint version! Mine still MIB. LOL

Yup, have put this side by side with the variant figure. On display to create a new line of collection of anime figurines.

i wonder how this kind of characters don’t have a pain in their back carrying that pair of... puffff !!! HAHAHAHAHA... maybe they help to keep the balance or something LOL...

now, focusing on the review, the figure is very sexy and accurate to the actual character, the work on the hair is wonderful and the translucent PVC gives it a sense of lightness... very nice paint job and sculpt as a whole and the display base is awesome !!!... =)

I really like these characters and the series was great. I still need to find my repaint version as I have it all packed up now.

>> chrismandesign
A pair makes it better. Ha! Ha! Even though the figure was released some back, it's still up to the mark comparing to recent released. Very observant of you to notice the tranluscent area on the hair. Your comments has value added my post. Thanx a lot pal and your support always...

>> bluedrakon
Great anime and manga before there was even Ikkitousen or Queen's Blade. I have Maya Natsume figure to cover now.

Ha! Ha! My wife had been asking why I started buying female figurines. They are not part of my collection.

Yes Bro. Now with a whole line of them, you can legitimately say they are part of ur collection!

It's kind of weird even for me to find sex appeal from anime and figurines. We are in a strange era now. Hee! Hee!