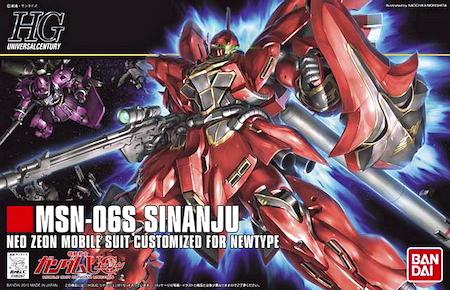 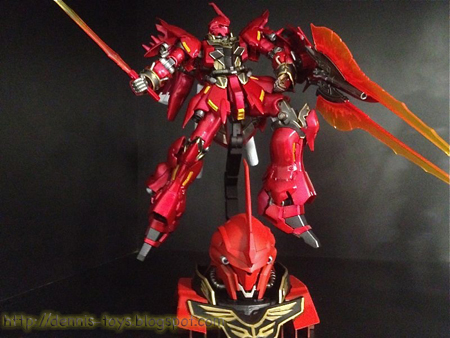 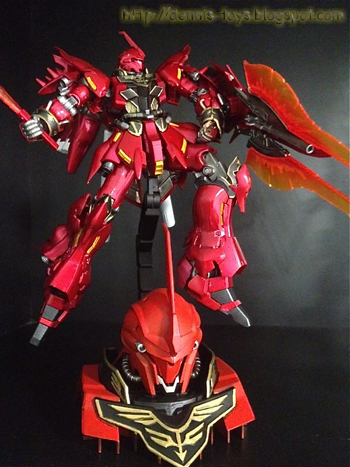 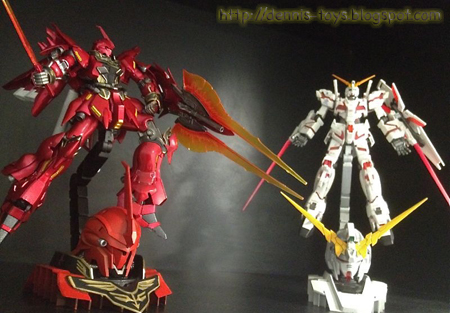 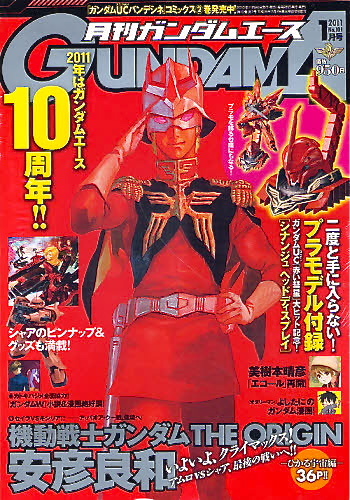 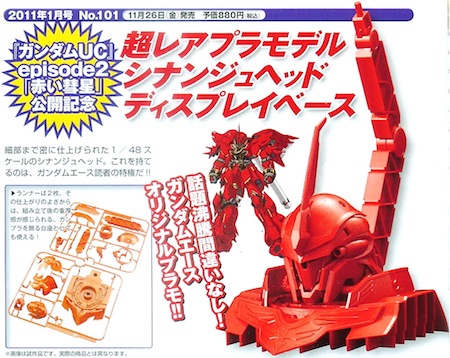 Met William yesterday at a gathering where he showed me pics of his latest project, the HG Sinanju on Sinanju head display stand. There were only 3 related pics on his iPhone, one with the HG Unicorn Gundam Destory mode, which I had previously featured, but the kits look awesome and nicely presented. He told me the backdrop was only his cupboard while Guy 'A' and I  joked that the pics were good enough for Dengeki Hobby magazine.

The Sinanju head display stand is a gift that came with Gundam Ace Jan 2011 issue and I remember William buying it. Anyway, the price of the bundle pack had also factor in the cost of the gift. Anyway, I just saw some of these display head selling without the magazine the other day at hobby shop, not sure if they were genuine.

I always think William has a lot of potential in Gunpla building and are often impressed by his works.  Cool gunmetal spray on the fist and inner frame, the metallic red on Sinanju and details to the originally plain looking display stand.
at July 27, 2012

Great work by the Gunpla Builder W. In this space of time where he had left our workplace, he has leveled up to a level which is far out of my reach..

Awesome job that your friend has done on the figure..However, the design of this villain is very nice as well :)

So am I bro! I'm alway rushing to complete and many a time neglected many details.

No doubt Sinanju's design legendary and set at the standard of what most will expect from the Red Comet. Gunpla Builder W will be very happy to see your comment bro!

It's really brilliant of Bandai to come out with the whole idea of head display. They look awesome with the figure.

yep is a nice work and the mecha design of the Sinanju (along with the Sazabi, the Gouf Custom, the Palace Athene and the Geara Zulu) is one of the most impressive in all the Gundam series available so far... by the way, no so long ago i was about to get this one in MG kit but i ran out of money (which is very usual lately LOL)... =)

Seems like you are a fan of mecha from Zeon and Titans. Apart from Zaku, Gouf, Zeong, Sazabi and Sinanju, most other names of Zeon MS are unfamiliar to me. When it comes to Gunpla, I too prefer MG or 1/00 scale. My budget for toys and kits have also shrunk and I'm sorry to hear that you have lesser spare cash for toys.

The Gunpla are well done, but those stands really are awesome. I wonder if they will continue with this idea of using Head displays

So far apart from these, there is head display of RX-78-2. My gut feel is probably Zaku II next but I hope in future there will be RGM head display... Lolz... Wishful thinking

I wonder if you friend like to watch Japanese adult video as well... Gundam and JAV are great combination of hobby LOL LOL LOL... slurrrppppppp!!!

I always thought they come in a package. Lolz... I don't about my friend but I confessed I have sins...