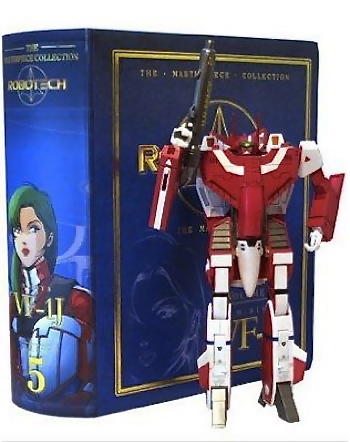 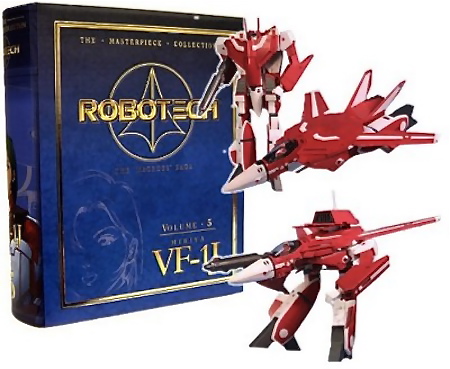 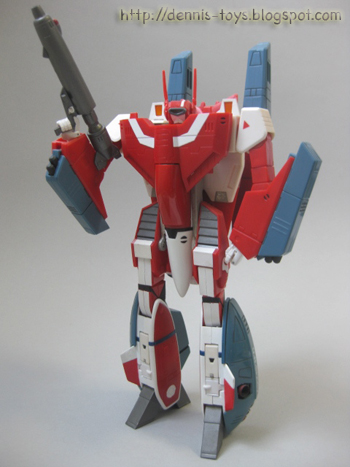 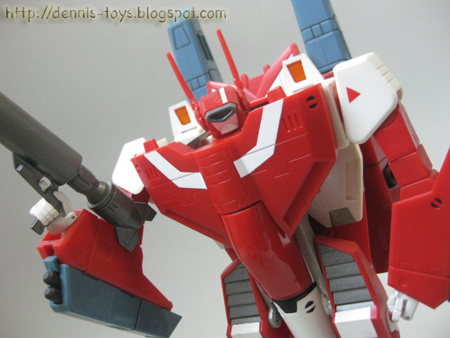 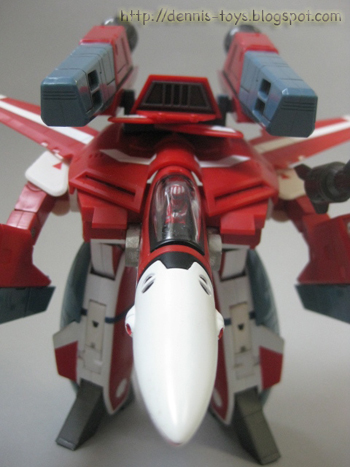 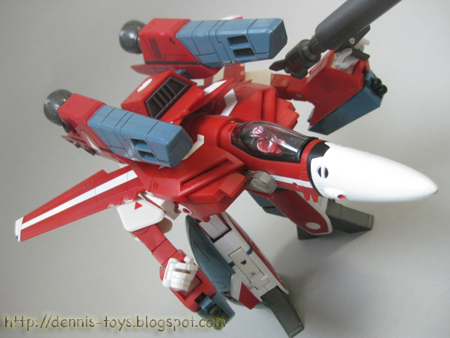 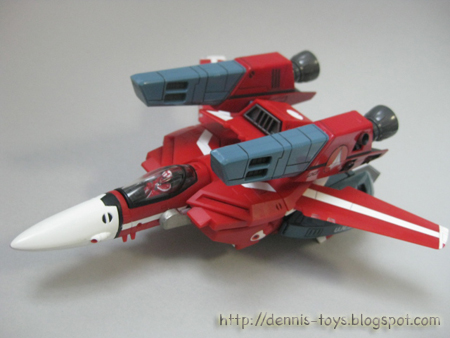 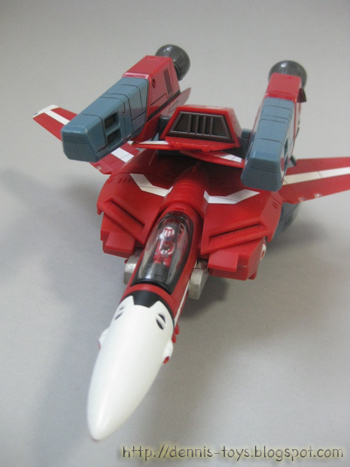 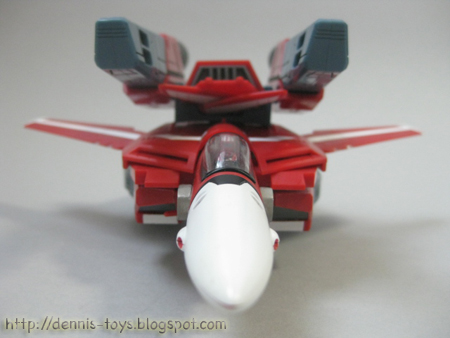 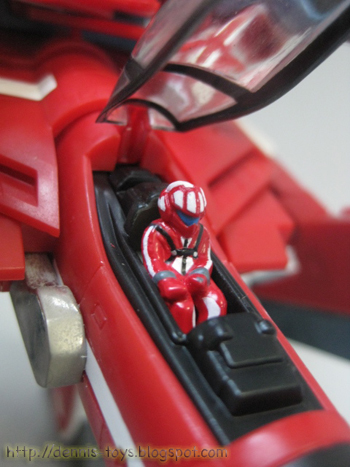 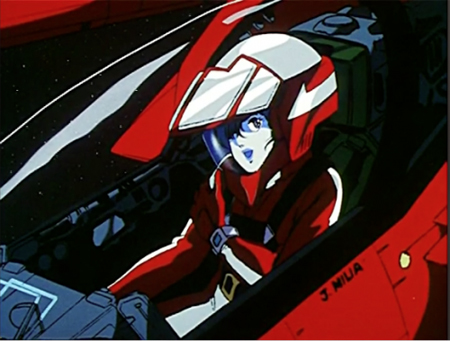 The red, hot and saucy Veritech Fighter customed for Millia has striked. It was assigned to Millia after she was married to Max Sterling and had pledged her alliance to U.N Spacy. We have come to the last second issue of Toynami's Masterpiece Robotech Veritech Fighter (Volume 5). In this post, I will also cover the Super Veritech Armor Appendix-C, specially tailored for Millia's Veritech Fighter. Again, this Masterpiece Veritech Fighter is limited to 10000 pieces in production which came nicely in a classic book cover casing. It's production was before Yamato's Valkyries, but Toynami had improvised on Takatoku's 1/55 Valkyrie design and rectified the issues collector faced in chunky monkey.

A swiveling joint was incorporated into the legs of the Veritech at the thigh. The thigh joint makes for a dynamic pose in Guardian mode. The nose of the Veritech Fighter was lengthen slightly compared to the Chunky Monkey. With the extended nose, the detail in the cockpit was increased and enabling openable canopy. One special feature of the Toynami Masterpiece that give an edge over other Macross toy-makers is the LED light in the eye visor incorporated to bring the robot to life just a bit more. The switch and battery compartment were cleverly designed to fit between the head and landing gear. A plastic barrier was placed in the ring surrounding the neck, so as to prevent the head from twisting around past 180 degrees, and possibly causing a disruption in the LED wire.

Super Veritech Armor Appendix-C is tailored to suit the colour scheme of Millia's Veritech Fighter. You won't see the problems with breaking the fastening parts in the legs, like those in vintage chunky monkeys cos Toynami had cleverly used magnetic force to hold the armor to the legs. As for the armor on the hands, it's done by extendable fastener. The front portion of the booster can be detached and he outer casing of the leg armor can also be removed to show some details of the interior.
at May 28, 2012

i thought this was the male character’s Robotech but i was wrong =/... the red looks better than the blue, at least for me, and all the detail and articulation makes it deserving the name: Masterpiece =O... i guess it was already sold, right ??? well, then good luck with his new owner =)

I think this toy will look better if you can give it some paneling with a fine Gundam marker. LOL

It is great to see that they used magnets for the optional parts. It is hard to get them on and off using the old way.

Great gerwalk mode and certainly the most striking looking valk in the red.

>> chrismandesign
Yup, there's the only female pilot in the original 'Macross Super Dimensional Fortress'. Correct again that I had already sold this off. In fact, I had sold my entire completion of Robotech Masterpiece. Following my mum's advise of just keeping some of the more classic pieces.

>> LEon
I doing it on some of my Yamato 1/48 valkyries. Also letting the ink dispersed a little for more realism.

>> bluedrakon
It true that the armours for the old 1/55 often got struck and had difficulty removing them. More often than not resulted in broken parts or stress marks.

>> Ant Sized Man
Indeed striking and usually Max and Millia were make exclusive as toys. For me, It's the battroid mode that I like best. Thanx for visiting!

Is this the first one shown in the anime before the yellow one??

Millia is one of those important characters in the very first Macross series and and made specially appearance as Mayor in Macross 7. I guess you meant the brown VF-1A, those valkyries are just grunt units.

Another awesome vintage collection of yours - I love the openable cockpit where we can see the pilot... sigh... I envy....

This toy is supremely fugly. Those hips/ intakes look like lego blocks. The proportions are way off in battroid mode. It's got shrugged shoulders and short legs. Articulation is pathetic too.
Fighter mode looks god-awful. Looks like a brick with wings. Exposed hinges on the tail rudders? Really?? I'm also amazed toynami used the old,inaccurate landing gear, not to mention that ancient swing bar....
Why anyone would've bought this over the Yamato 1/48 is beyond me.
The stupid book and led eye gimmicks aren't worth it.