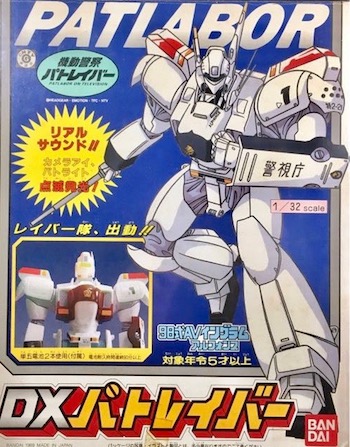 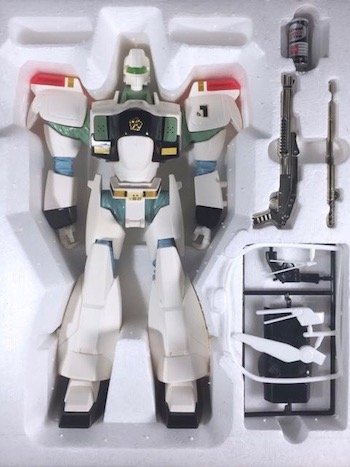 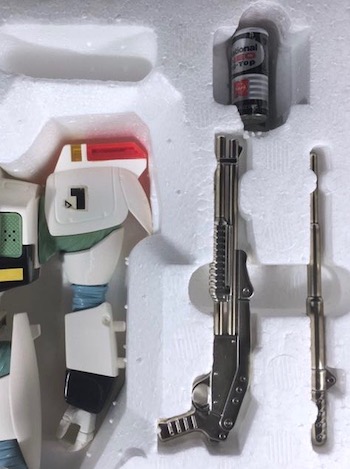 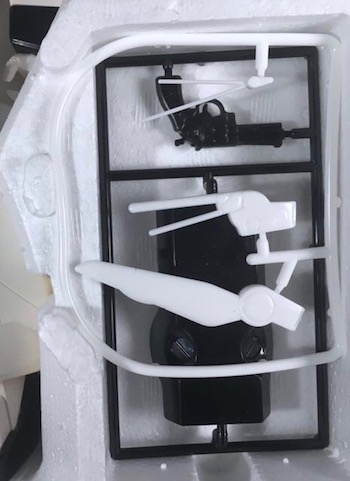 Correct me if I'm wrong, this should be the first Patlabor Ingram toy that was been built. Standing approximately 12", this magnificent 1/32 scale Ingram is made in 1989 by Bandai. In the 80's, toys were made simple so this Ingram's articulations are only limited to bending of kneels, legs, elbows and shoulders in up and down motion. The head can turn left and right but not up and down.

The toy is battery-operated by using N size battery and when you pushed the small button on the spinal area, it will light up the visor on the head as well as the blinkers on the shoulders. Bandai has been very generous since this giftset comes with batteries included. Believe it or not, a couple of days ago, I have used the 'National' batteries originally from the box, on the toy and to my surprise, both the mechanism and batteries still works. Wow!

Accessories for the toy include the revolver, shield, police baton and shotgun. Wonder why the baton and shotgun were chrome but anyway, the chrome are still nice and shiny. The Achilles's heel of this toy is again the white plastic which somehow had succumbed to the test of time, with slight yellowing. Nevertheless, I have resprayed the toy with Matt white and it now looks as good as new.

lol it can still light up after all this time! :D If they did the rubber parts covering the joints in gray it would even be better.

I think the enemies would have died due to the guns bling bling XD So shiny!

Grey is the colour I thought so for the joints cover. The chrome on the weapon! Hee! Hee! Can't explain! At least you have an explanation for it. Hee! Hee!

WOW... this toy is huge & very vintage... myb someone else gonna say this: panel lines delineate will improve its appareance a lot... for my taste, the chromed guns looks weird but incredible, something different... i never saw an N battery... big, big fun 4 u =)

Wow! I never seen this version before. The lighting was a pleasant surprised. You still keep it at very mint condition for the mechanism to work and the chrome paint of the weapons. Salute!

The weapon seems similar to what special forces carry. Is human controls this robot in the cartoon??

OMGAWD!! They chromed the f_wking Shot Gun, that's damn awesome, Man I wished they did the same thing to American type Patlabor, its fully blue btw.

>> chrismandesign
At first, I thought N size batteries were long extinct. I made a check at DIY store managed to find some. Ha! Ha!

>> deSMOnd
Yes! Patlabor Ingram is piloted by human. Kind of like driving a manual car cos those auto mecha in the series always goes berserk. Kekekeke!

>> Gunstray
I looking for the exclusive blue American type Patlabor. In fact, the American type Ingram only appeared in one of the episode in the main character's dream.

What a cool addition to your collection. I am glad you had the battery next to a AA as I had no idea what an N battery was.
It is wild that the thing still worked on the original batteries.

Yes, this godfather Ingram is quite a gem. N size battery is also strange to be at first. It's so uncommon and it probably be faced out in the future.