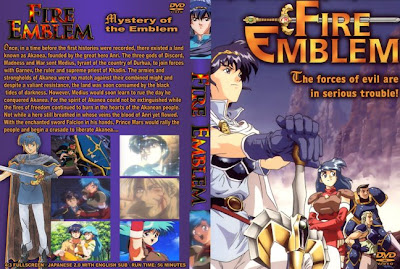 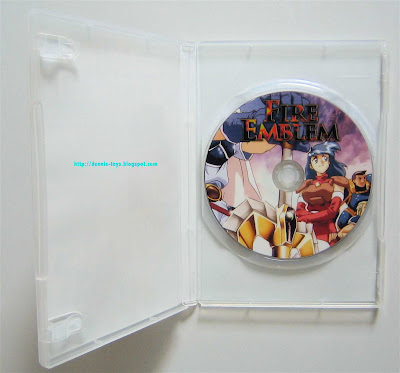 My DVD with disc label
My most recent DVD import is this Fire Emblem anime which I got from a U.S seller on EBay. This DVD is a direct VHS to DVD transfer seller had spent effort to design the and the disc is DVD cover sheet and disc label. The DVD is region free and English dubbed.

There is no original licensed DVD for this anime and the one I bought is so far the best you can get. The DVD is only sold within U.S and I was fortunate that seller agreed to send to Singapore after my pleading.

Sadly, the anime was discontinued only after the release of two episodes, which means this DVD contain two episodes. I'm a big fan of Fire Emblem games, so my liking for this anime is really indescribable and it keeps me wondering why only two episodes.

Plot Summary: Once, in a time before the first histories were recorded, there existed a land known as Akanea, founded by the great hero Anri. The three gods of Discord, Madness and War sent Medius, tyrant of the country of Durhua, to join forces with Garnev, the ruler and supreme priest of Khadin. The armies and strongholds of Akanea were no match against their combined might and despite a valiant resistance, the land was soon consumed by the black tides of darkness. However, Medius would soon learn to rue the day he conquered Akanea. For the spirit of Akanea could not be extinguished while the fires of freedom continued to burn in the hearts of the Akanean people. Not while a hero still breathed in whose veins the blood of Anri yet flowed. With the enchanted sword Falcion in his hands, Prince Mars would rally the people and begin a crusade to liberate Akanea....
at August 30, 2008