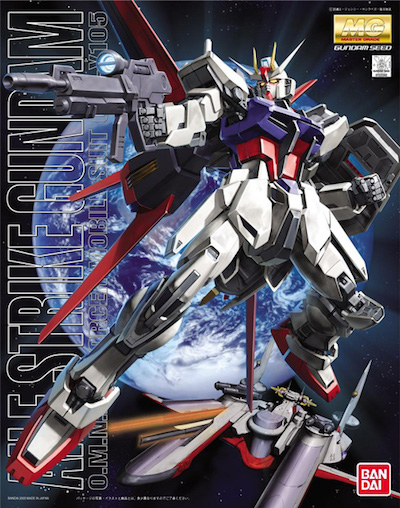 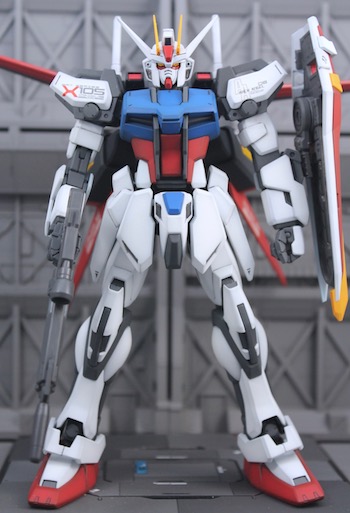 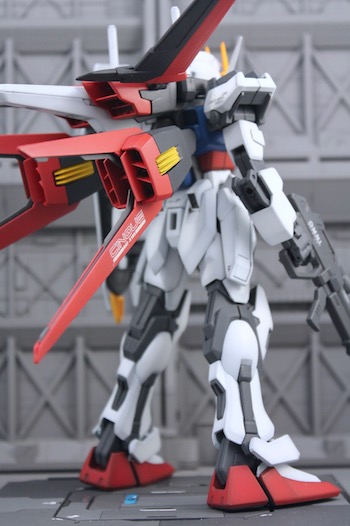 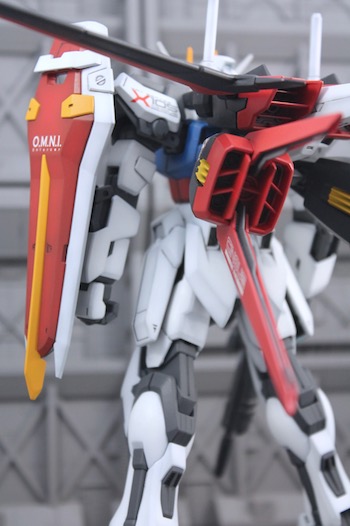 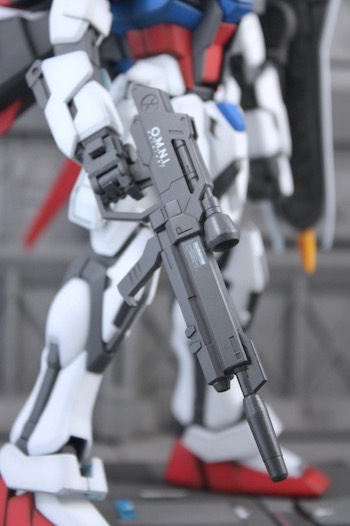 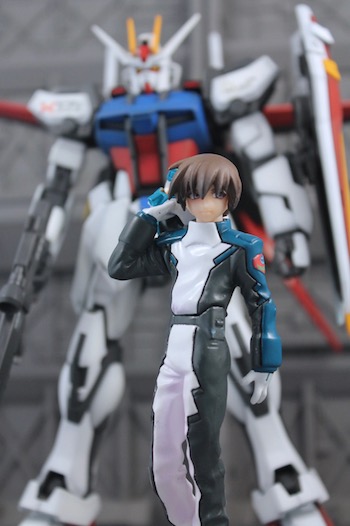 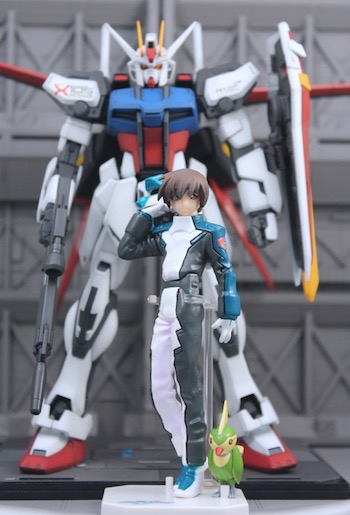 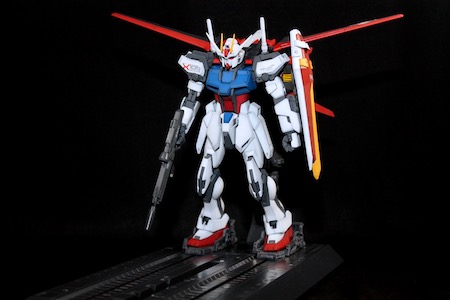 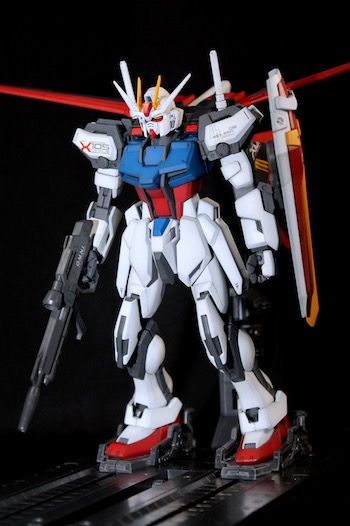 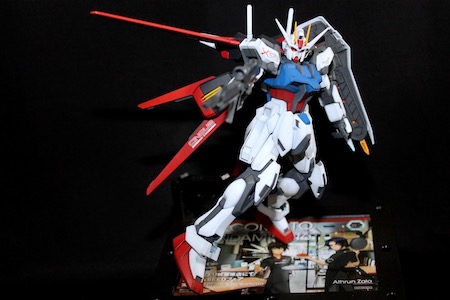 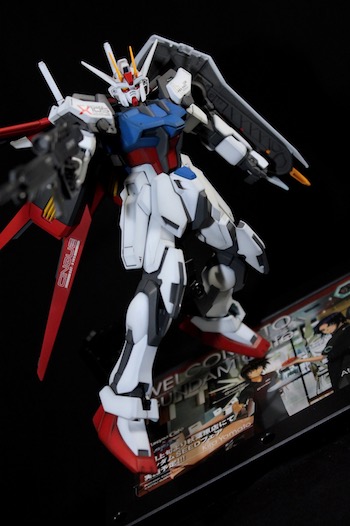 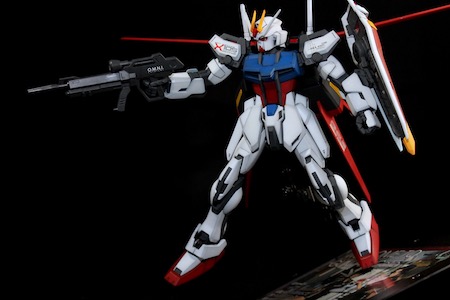 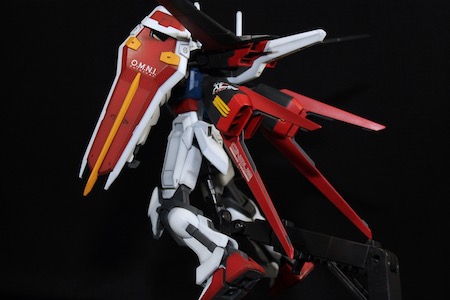 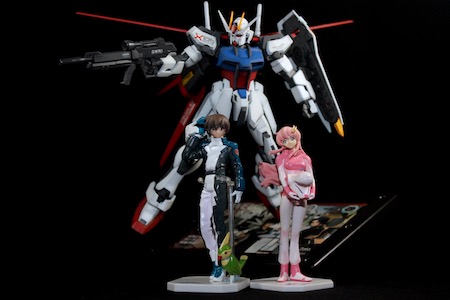 An amazingly detailed and fully posable snap-fit Master Grade MG model of Aile Strike Gundam, I'm ready to replace my Non Grade version on display. 1/100 scale stands 8 inches tall and doesn't dissappont! No doubt on posabilitis as the endoskeleton frame, double jointed feet and improved shoulders range of motion are just some of the features which this gunpla contributed to the modern standard of today. Try using the display stand which double up as a launcher platform as well, if you have the luxury of space for display. The base configuration of the GAT-X105 Strike is armed with two Igelstellung 75 mm CIWS, two Armor Schneider combat knives, and a 57 mm high-energy beam rifle.

Like all the other mobile suits of the G Project in Mobile Suit Gundam Seed, the Strike is equipped with Phase Shift armor, which renders it virtually immune to all manner of physical attacks. However, due to the armor's high energy requirements and the limited power reserves afforded by its energy battery, the Strike cannot keep PS armor activated for long. The Strike and its variants all use the General Unilateral Neuro-link Dispersive Autonomic Maneuver Synthesis System operating system.

I got mine fully painted and really like the light shading on the edges. Just need a few well-defined insignias and clean finish would do the trick. When you first step into a cockpit on a robot or a gundam, what happen next? Either you freak out with the massive controls or you do it like Kira Yamato! Adding to the display is gentle yet lethal pilot Kira Yamato trading figure with his sweet heart. Strike Gundam is close to my heart for it's similarities to the first Gundam and its significant in the anime, playing a critical role in the plot, right from Kira Yamato to Mu La Flaga protecting Arch Angel.
at November 22, 2017

I have to agree with you pal, this is one of the best mecha designs ever created for the Gundam franchise and it looks still striking and groundbreaking after more than a decade of the release of the Gundam Seed Series !!!... It has the classic Gundam color scheme (white, red and blue), nuanced with grey, on purpose, I guess, in order to create a visual link with the veteran RX-78 of a different timeline... The work of Bandai in this MG models is brilliant, both in level of detail and articulation, the neat paint job with light shadows really improves the overall impact of the piece; it reminds me of the kits which are waiting for some love on my part, HEHE !!!... =OOOOO

>> Chrismandesign
Pretty cool for that the Strike Gundam had been repackaged using up-to-date technology. I’m all pleased with the new released as well as the brilliant work by the previous owner.

>> Desmond
Yes bro, the Aile Strike part was loved by fans when it first introduced before Super Robot Wars started tapping the idea..