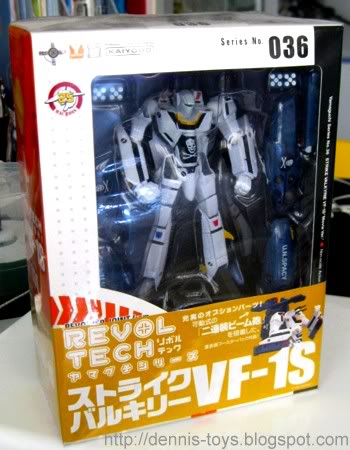 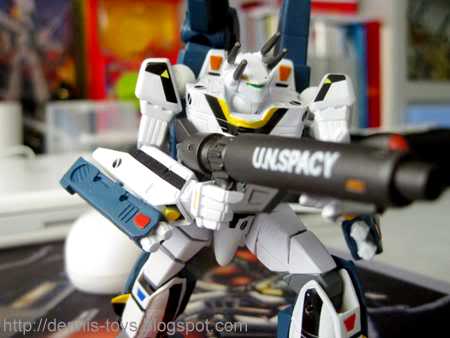 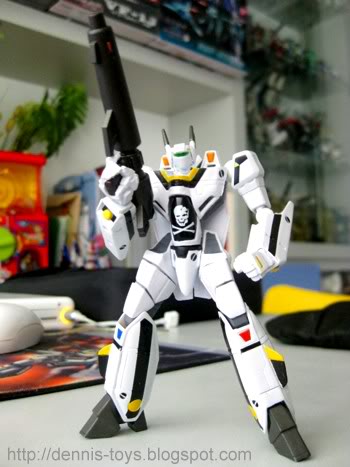 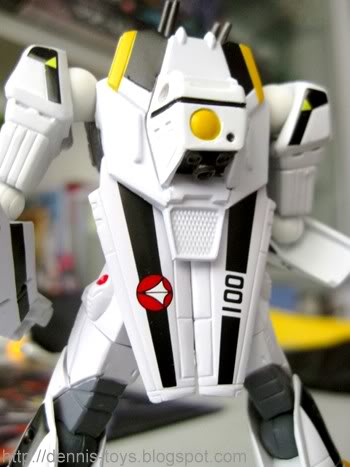 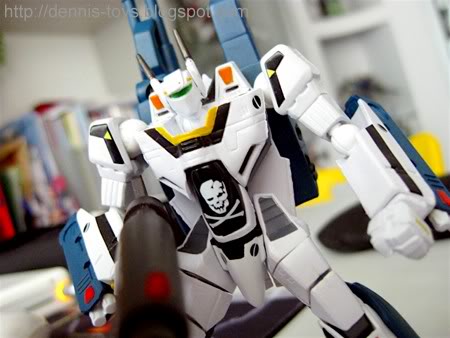 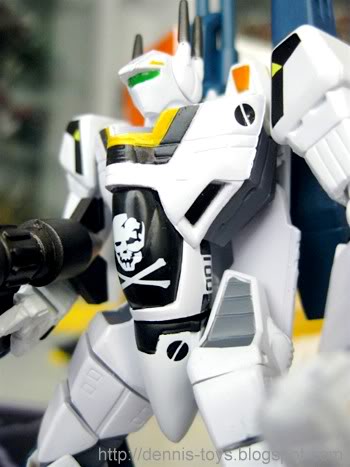 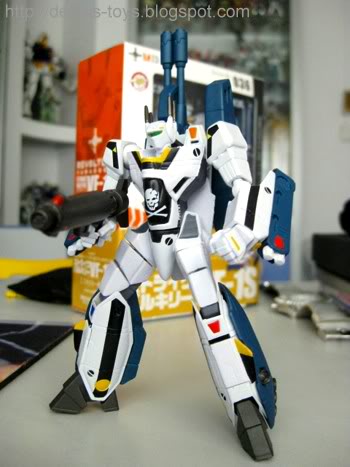 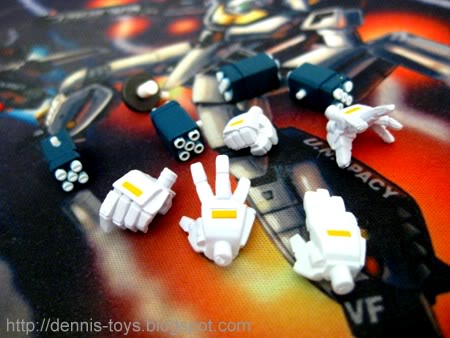 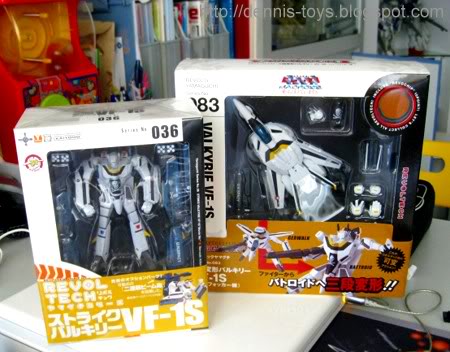 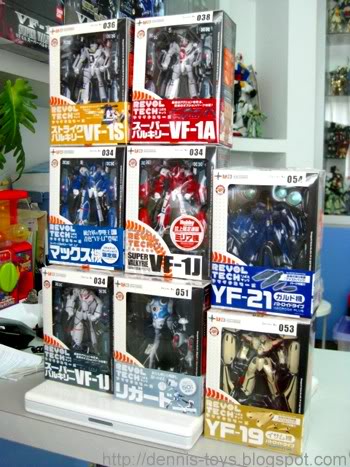 Before Toynami could secure its reputation for making the most posable Macross figure (Super Posable), it got beat down by Kaiyodo from the rising sun of the east who released Revoltech Macross figure that’s more than meets the eye. Even though Revoltech figures are so-called non-scale figures but supposedly ani-correct, it stands approximately 4.5 inches in actual size, which is not very big.

What makes it really cool is the evolutionary innovative joint system known as RevolTech Joint (or Revoltech) that allows the figure to demonstrate any kind of realistic pose. Those roller joints which are seemingly obvious on the shoulder allows incredible posing which allows mimic to almost favorite action poses from anime scenes. It kind of redefine the standard of action figure these days. I hope I’m not overrating it. Hee! Hee!

Kaiyodo has excited Macross fans even more as the set comes with additional parts includes the Striker Packs, stand, hands and missile launchers like the version you see in ‘DYRL’. Revoltech figure is relatively detail with neat paint job so the soft plastic however at close-up the look rubbery look still could be seen.

Unfortunately, the figure is non-transformable and most poses require the use of stand in order to hold the battloid. For standing poses, you put the feet into two pegs in the stand. Goes to say that the figure don’t balance too well.
at April 10, 2010

I want them!!!! After seeing your images... they don't look half as bad as I thought. They actually look quite nice. And being unable to transform is a good thing, because it allows them to pose naturally and not as stiff.

OMG I want that these so bad!!!

Do you know where I can buy the Regult (Battlepod) online? I can't find it anywhere. =(

>> G.G
Seriously they ain't too bad especially when bought @ a discounted price. Can really do awesome anime pose! About the Regult, I guess you can still check ebay. There's one at the link below but the shipping cost didn't seem too reasonable.

Wah bro..you got so many Macross figures, Salute to you :P

hehehe now it’s my turn... i hav my first encounter with Revoltech Kaiyodo figures barely a few months ago & i was amazed... they r fantastic figures, super poseable (really!!!) & i hav a pair i’ll publish soon... double congrats on ur Macross Revoltech collection, it’s great & all the extra accesories, makes them a very good choice for an affordable price... man , & the video of that japanese collector is really, really funny, i think he loves to play with his toys & doesn’t hav any problem showing that (freaking funny kjakjakjakjakjkajkajkakja !!!)

I have been waiting for you to comment pal! Ha! Ha! Congratulations to you too for having Revoltech Kaiyodo figures! I have watched this video many times and each time Mr Jap toy lover didn't fail to amuse me! Lol

OMG you Have Max and Millia's VF, even a YF-21, Sob too bad the transformable ones are either special releases or not pending at all.

Still striker parts, yout hink it would fit with the transfromable version?

Took me sometime waiting for Max & Millia's price to down. I guess with transformable version and pending their release, the value of the non-transformable will continue to drop.

Before I found your blog, I was converted to solely building models (and stop collecting toys). But after reading your blog.... I am starting to get more & more interested in toys again.

Feel so bad influencing you. Kits generally will cost lesser than toy but the satisfactory of building you very own is priceless. I'm very thankful to you supporting my blog.

errrrr it depends Dennis, not all gunplas r cheaper than their chogokin versions, for example the special coated (titanium finish) & all the PG r by far very expensive... & if add the cost of finish’em: paints, markers, airbrush & compressor (one time), nippers, cutters, masks, etc., the final cost could b substantial... OFC excluding the "sentimental" value of the personalized kit u mentioned =PPPP

I am so glad that I kept away from all the Macross Mecha toys. I would be worse off than I am now.

I would rather have ones that transform anyway :)

>> chrismandesign
You are right about PG. The pricing is astonishing for perfect detailing and size. Not to mention the time and utensils needed. I got me wrong bro! Hee! Hee!

>> BlueDrakon
Macross merchandise seems to be like an endless recently and I'm slowing losing the fuel. Good thing I learn not to spend unnecessarily. The transformable Revoltech seems to receive a lot of critics.