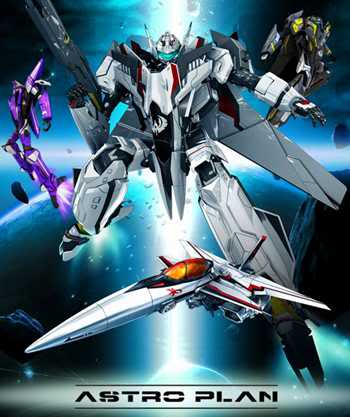 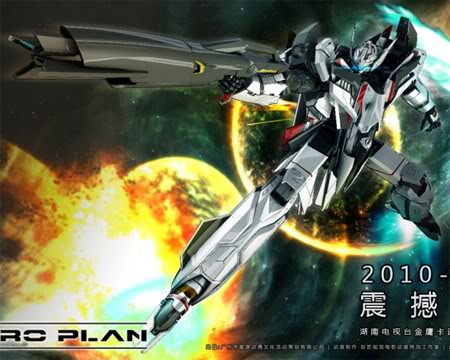 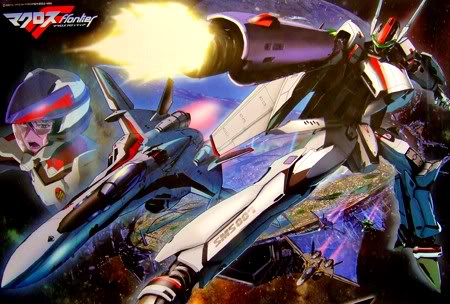 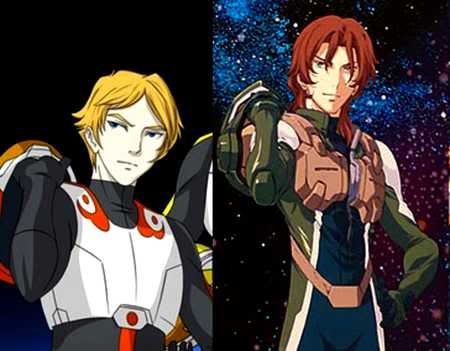 Astro Plan is a recent China produced mecha anime that had received tons of criticism ever since its released. Many have criticised the creator for lacking in creativity and copying from Macross and Gundam. I was first curious to see all those 3D fight scenes but after watching more segments of it left me with much disappointment. The 2D style drawing of the character can't match even third grade anime.

If you look at the above pics, the three modes transforming robot in Astro Plan does have much similarity with Alto's VF-25F from Macross Frontier. I did some searching online and had found other similarities like the fleet logo in Astro Plan looking so much like U.N Spacy logo. Other similarities included space-fold alike Macross Frontier, the ship carrier alike Archangel from Gundam Seed and one of the pilots 'Fei Yi' looking like the Triplet brother of Lockon Stratos from Gundam 00.

Maybe we shouldn't look it in such negative aspect. The cartoon is probably cater for young children it has churned out more variety of mecha toys which I sure won't mind buying, provided the price is reasonable. But I kind of doubt the quality. Well! I have not seen the toy in Singapore just yet but you can click this link for a peep at the YF-10 toy.
at April 12, 2010

You think SG can do a better job? For all you know we maybe using their talent over here. LOL

look a lot like Gundam, but hey, more anime and toys make our life even better. hohohoho

Well all I can say is that Chinese is well known for ripping stuff. =)

i agree with G.G. .. eventhough the battle scene look quite interesting but.. still feel like something is missing.. the originality.. i can see they even put in the idea of vandread too.. those alien.. on 1.36 minute.. it show the transformation and it kind of slow.. well.. the weapon look better than the MF series weapon.. those pilot can even sense like kira yamato or rau la clauset.. haha.. i may watch it.. even though it look suks.. shame on chinese and myself too..

wat can i said it is a good foundation for them to learn for their mistake.. but the sound effect really.. argh..

uhu... all of u r pretty nasty with that piece of crap (errrrrr formidable action series ???!!!) known as Astro Plan, kjakkjakjajkajkjajkajkajakajkaja... so sorry i love sarcasm !! =PPPP... but i think this is the usual path for chinese products: firts they copy (many times with poor results) then they try to create something unique (with regular results)... but they learn fast & as we all know China is the largest manufacturer of collection figures in the whole world...

LOL - I guess the toys are cool, but taking ideas away from Gundam & Macross is wrong.

The 2D is pretty bad, but the mecha sequences are good.

You came late bashin the rippoff there, but besides being an obvious copy,I liked the mecha, and there is a pretty high chance I'd buy it over a "REAL" VF...Im blasphemous

>> LEon
Very right bro, we very much depend on foreign import these days!

>> Asrul
Doesn't matter whose copying, it the end it's the consumer who benefit. It's probably up to individual liking.

>> G.G
Like I say before, setting factory there is as good as surrendering your product blueprint.

>> seven6398
Oh yes, now at add vandread to the copying list as well! Copying is also part of learning and hoping anime artists will improve with time and do us Chinese proud with innovative creative mecha anime in future.

>> chrismandesign
China is proud to say that majority of the toys you are having are made in China no matter where the ideas come from.

>> Bludrakon
If only the 2D drawing is better, I would have stay longer watching.

>> Gunstray
I will like to get the toy to have a feel if it and discover the transformation and blog on it.

>> deSMOnd
I don't deny that the Mecha in Astro Plan look nice and tempting for someone who love valkyries a lot.