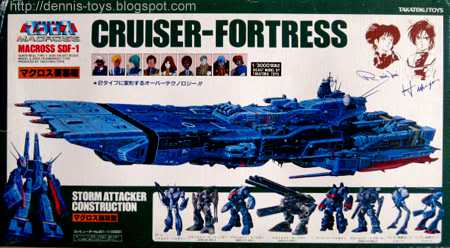 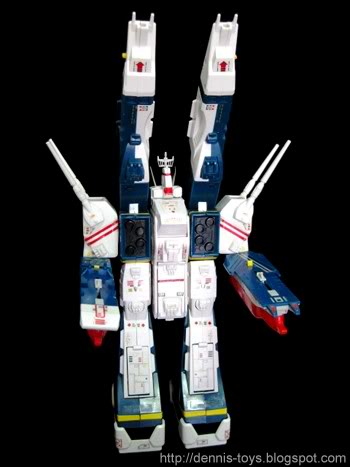 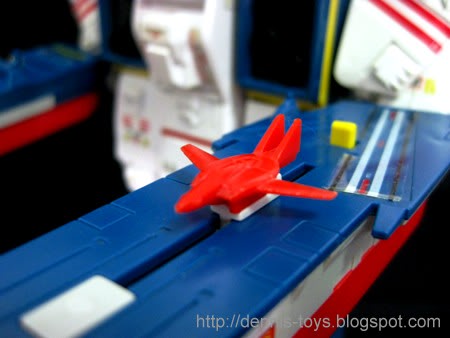 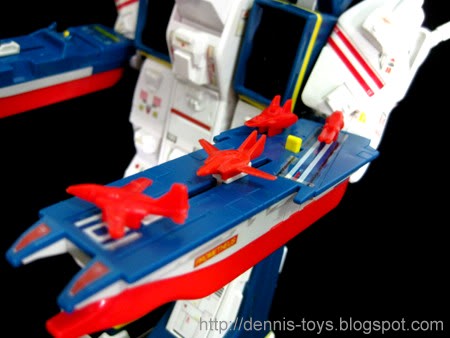 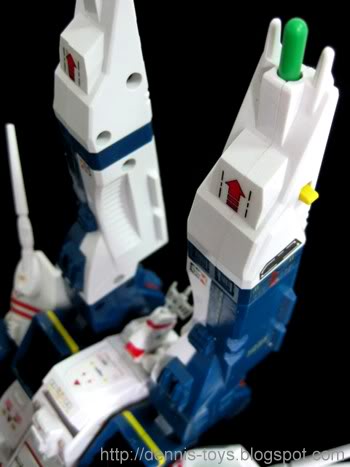 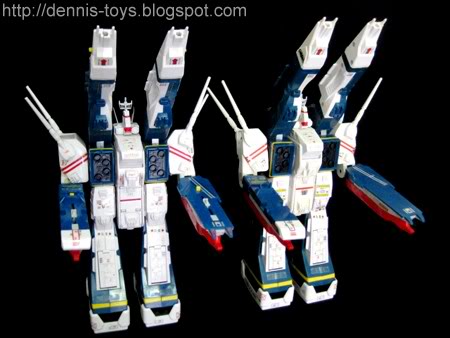 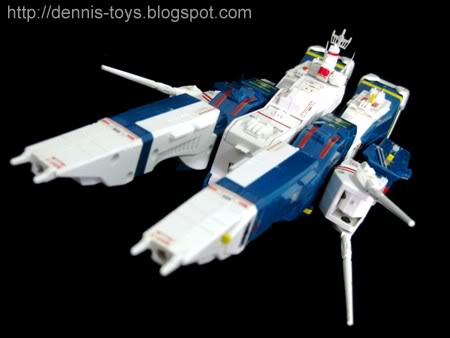 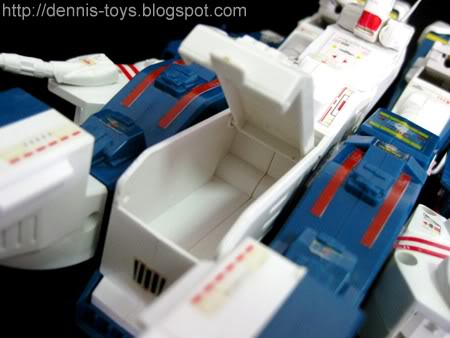 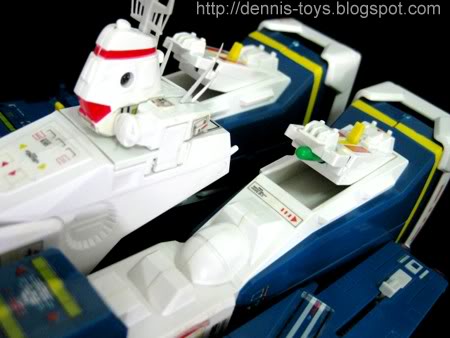 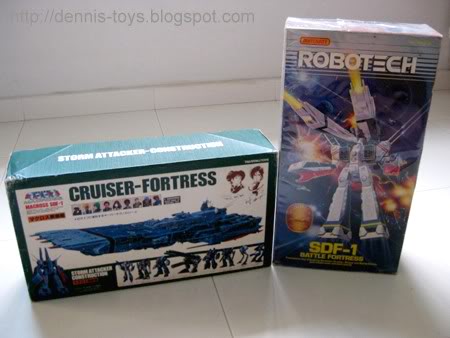 
Takatoku 1/3000 scale die-cast plastic (with some metal) toy of the Super Dimensional Fortress Macross (SDF-1). The toy is transformable between cruiser and assault modes. Finally, my very own Takatoku SDF-1 from "Super Dimensional Fortress Macross" (AKA, "Robotech: the Macross Saga"). This is the big one! This toy stands about 12" to the top of it's "head" (ie the command bridge") and is made of plastic with some die-cast parts (mostly internal).

Unlike the US version released by Matchbox, this SDF-1 features spring-powered shooting missiles at the tip of each of the big main guns. Additionally the Datelus and Prometheus (the two aircraft carriers that act as the "arms" of the SDF-1) can launch small Valkyries/Veritechs and other ships (included) from their upper decks. Very cool!

I'd have to rate the condition as "Very Good" to "Near-Mint". Nothing is broken, there is a little yellowing on some of the white parts, but not bad at all. As for the box, it’s a bit beat up, but in good enough shape. Structurally, it is completely intact and mostly in good shape. All the flip-open ports and landing gear function properly. Any higher grade, I will have to pay more. This is the centerpiece of my Macross collection. Yahoo!
at April 16, 2010

OM look at this monster (& it was cloned as well)... this must b an expensive & classic toy, hard to get !!! congrats Dennis... those ejectable missiles r a nice feature, makes it more an enjoyable toy (only for big boys like us)... Takatoku, sounds funny in my laguage... =DDD

This piece is the original and the matchbox version is more of a clone. Takatoku sounded funny! Maybe it's also one if the reasons the company goes busted. That's makes the toy even more rare. Ha! Ha!

OMG - sweet find and such a great addition to your collection. I know these things are not easily available anymore and in such great condition to boot

Very classic. This is definitely a collector's item.

Hai...everytime I come to your blog... I feel like I will spend money soon. haha

This coming week I will be getting my first SD BB Gundam... planning to get one with a horse. =) Not sure which one yet. But definitely from the current anime series.

>> Bluedakon
You have very sharp eyes my friend. This is indeed one of my priceless possession that is real hard to come by.

>> G.G
You make me feel so bad to poison you luring you to spend money. Hee! Hee! I think Lu bu, Zhao Yun BB Gundam & one of the GM troopers come with horse. Anyway, the horse can also be found individually in a box. I too feel have buying horse for my movie version Lu Bu Tallgeese.

For some reason Im getting this stupid kiddy vibes of smashing the SDF, Star destroyer, and the enterprise, and maybe even space battle ship yamato together, and find out whos tougher.

Wow! What a way to get rid of all the famous fictional space carriers! Hey! You didn't mention Whitebase or Archangel! Are you protecting the Gundam? Ha! Ha!

Bro, I always salute to you as you would pay to get what you want even if the price is damn expensive. To me, I won't buy if the price exceeds more than $350 unless I really really want to have it..

Sometime it's just like a having the piece to complete the range so decided to buy. Always have mixed feeling when spending so much but it's happy to have the toy. Will keep thinking of it if not having it. Hee! Hee!

Hi. i have this one, however some parts are missing..do you able to know where to find parts for these macross?