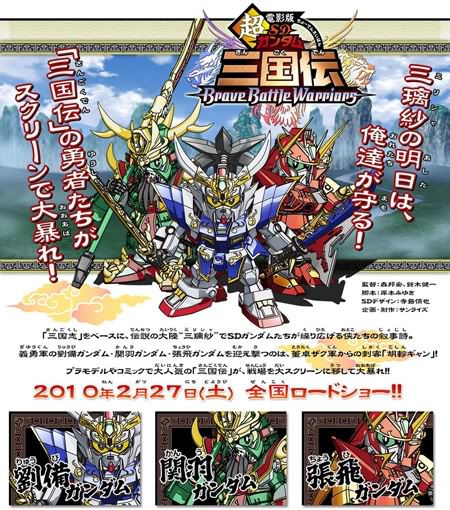 I am a loyal follower of the great master Ngee Khiong's blog and through his recent posting, I managed to watch the first two episodes (10 min per episode) of Sangokuden Brave Battle Warriors on Youku.com. Some Gundam fans may not like the idea of such BB Gundam animes but like it or not, it has become a reality. I am supportive and have waited long for Sangokuden anime to be released. I'm even hoping they would be released in DVD or Blu-ray for collection. Below are the expected release date of coming episodes (Extracted from Ngee Khiong's blog)

Episode 3 (April 17th): For the People (民のために)
Ryubi Gundam, Chouhi Gundam, Kan-U Gundam meets Sonsaku Gundam and Sousou Gundam in their pursuit over the forces of the Yellow Scarves.

So far so good. Don't take it too series as this is more cater for children....but i like!

looking great. always love anime and the way the maintain the cuteness of it. hohohoho

>> chrismandesign
The very first step to end up liking the figures would be liking the anime. Hee! Hee!

>> Asrul
It's cute indeed! Like Hello Kitty that the characters' mouth hardly move will they speak.

I find it nice and interesting and good this it has characters from Romance of Three Kingdoms.

The look much taller in the anime compared to the kit version :D but nonetheless very happy to see one of my favorite gunpla line getting the anime treatment :D So you are waiting for Lu Bu to come out haha?

Honestly I never thought much of BB Gundams... it had always been a bit of 'meh' to me. I keep telling myself, this is not Gundam and it is totally crappy.

But somehow I am feeling a bit different now. And I also gave the anime a try, and I admit it is a bit too cutsy, but it is also enjoyable to watch. I really digg the ancient battle custume on the Gundams. Totally cool, just like the upcoming Musha Mk-II gunpla.

I am now struggling about trying out my first BB gunpla. At this point I am still hesitant. And also I would feel a bit ashame to post it on my blog... Let's see if I fall prey to BB soon. (No offense to you BB fans)

>> G.G
There always a child within us and my friend, you have started exploring it. Hee! Hee! I know the anime is kiddish and to some may be crap. But it's a good way to introduce Gundam to kids before they are exposed to MG & PG. There's a lot of fun incorporating ROTK characters and armour to Gundam. Ha! Ha!

So Cool _ I have to get my son with me and watch this with his SD Gundam figures I got him a few years ago.

Your will definitely luv it especially with your companionship! Cheers!