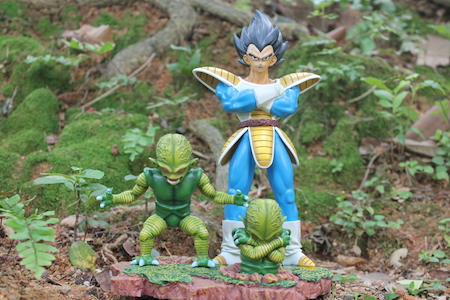 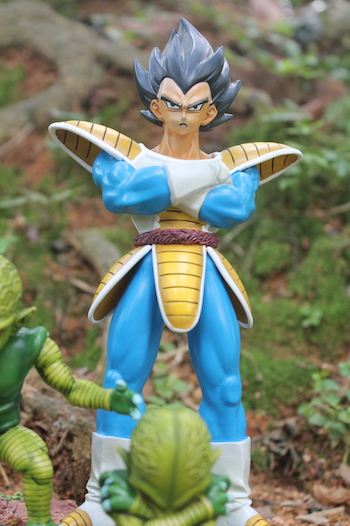 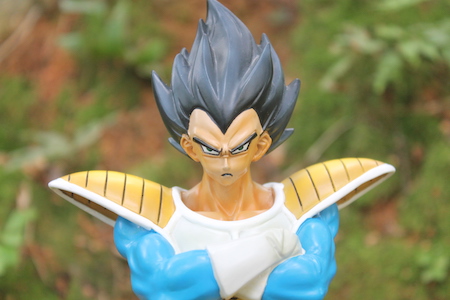 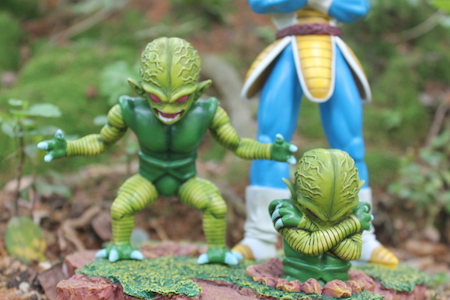 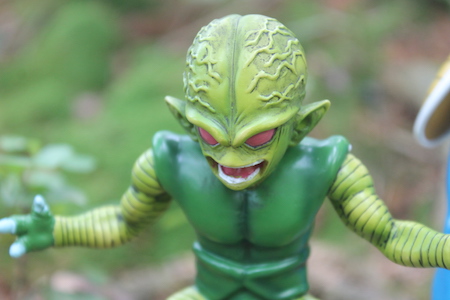 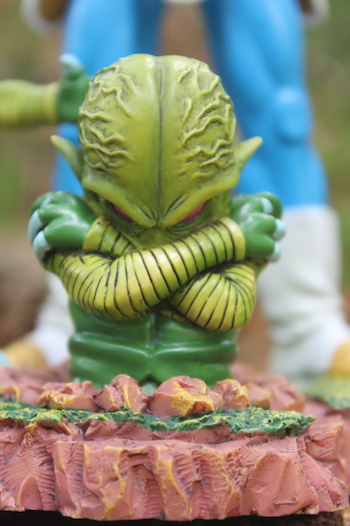 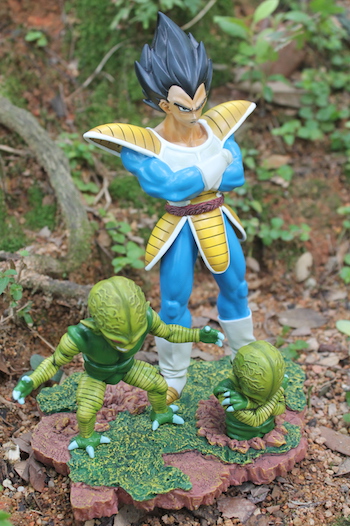 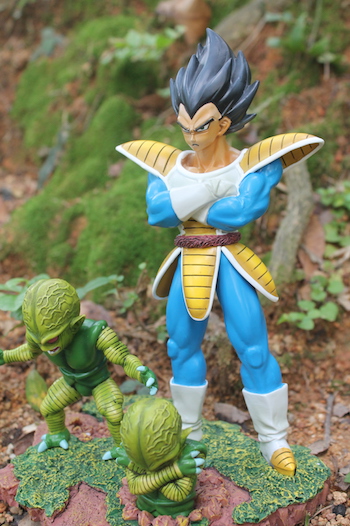 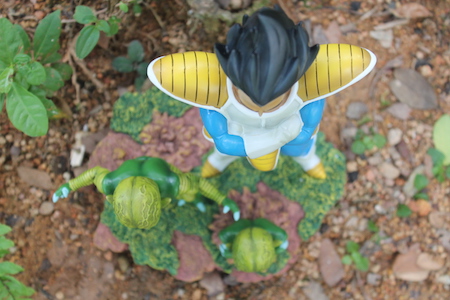 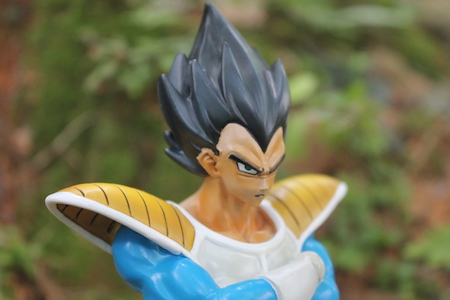 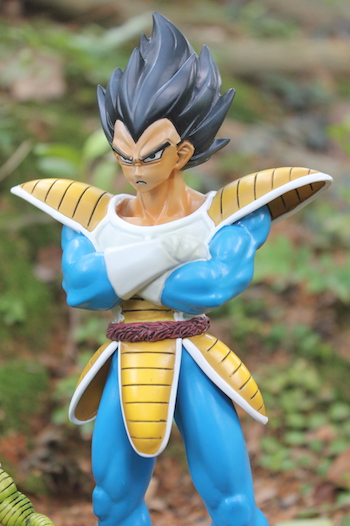 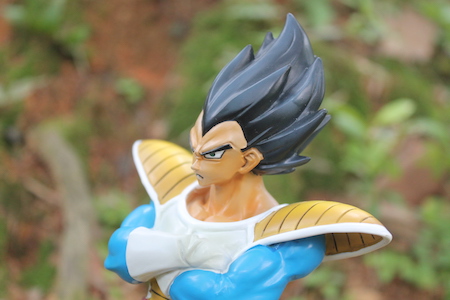 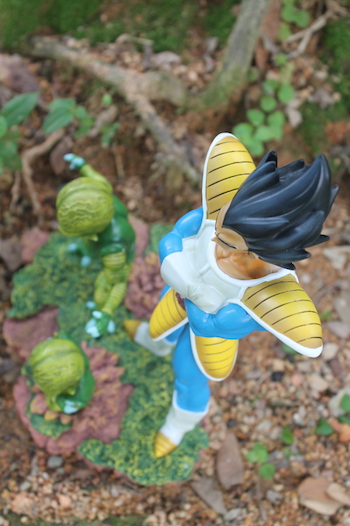 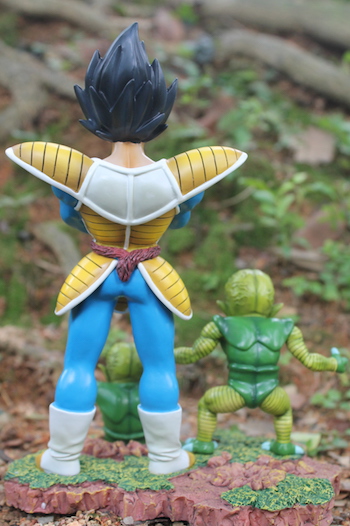 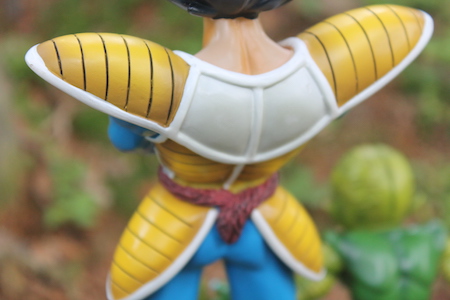 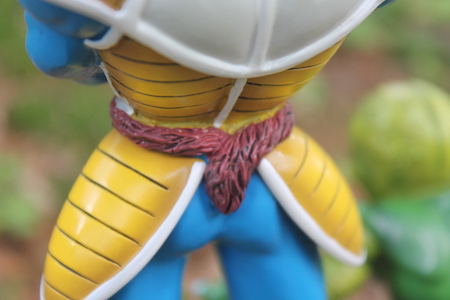 This evil Vegeta with Saibamen diorama 1/6 scale statue, supposedly combined with the Nappa set however I have yet to get my hands on Nappa statue.... 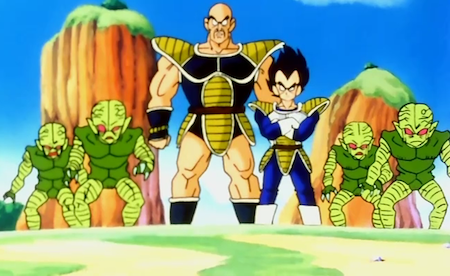 It considered an unlicensed Dragon Ball Z DBZ statue and I believed it was originally sculpted by ECS-Direct, Factory Direct company. Mine should be a recast by another factory as Vegeta was without this red scouter. I failed to realise it when I bought this statue and felt something important missing after examining. Maybe the factory finds it easy to paint Vegeta's face without the scouter. My bad for not being meticulous enough, well that's just me.

Made of resin, statue has a solid weight with nice size of Vegeta in 8" (25cm) and Saibamen 2"- 3". It's pretty unique since I don't see many statue that comes with Saibamen. Statue is 100% hand crafted, pre-painted, highly detailed and ready to be displayed. The Vegeta we see there is the Prince of Saiyan during the 'Attack of the Saiyans' arc when he was still evil and aims for immortality through obtaining earth's Dragon Ball. Statue shows Vegeta folding his arms with Saiyan's pride, anticipating how the Z Fighters would fair against his minions Saibamen. 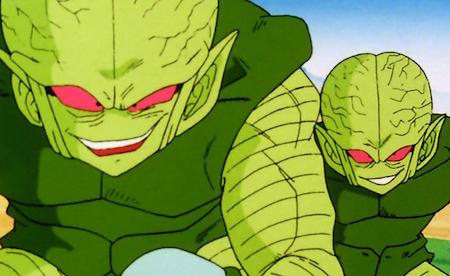 His expression is rather pissed-off with impatience building up that he would kill them any moment! Poor greenly Saibamen, humanoid creatures that grow from a planted seed placed in the ground. 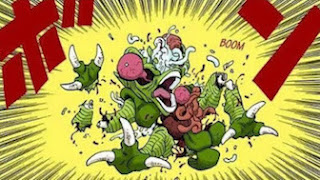 nice outdoor background to suit this vegeta bro! too bad scouter not there.

>> Leon
Thanx bro! That's my favourite nearby outdoor site... Unfortunately, I didn't get the version with scouter. My bad : (

For a not officially licensed product I think this diorama statue is very interesting and resin allows some neat details in the sculpt that PVC just cannot offer... The color scheme in Vegeta tends to be a bit pale, but I like the way some shades were added to the armor and I always appreciate a handmade work !!!... =D

>> Chrismandesign
I would also think that it’s indifferent and few had included Seibaiman to the diorama. The sculpt in resin brought out another different feel to the character as a whole. It’s a nice line of collection as well.

The sculpting and coloring for Vegeta figure is not good leh...

>> Desmond
It’s an old sculpt therefore not as well good. In terms of colour I think the skin colour loses out. What I like is the overall with combinations of diorama.