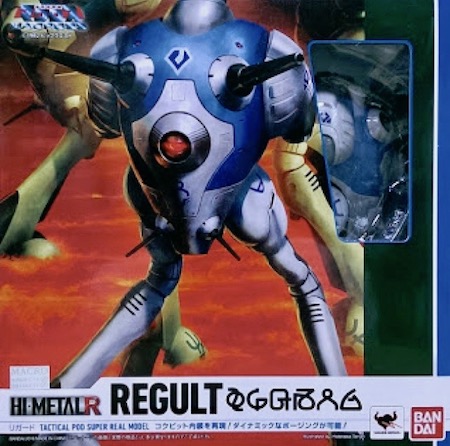 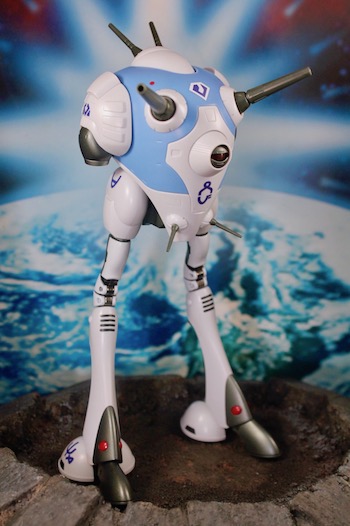 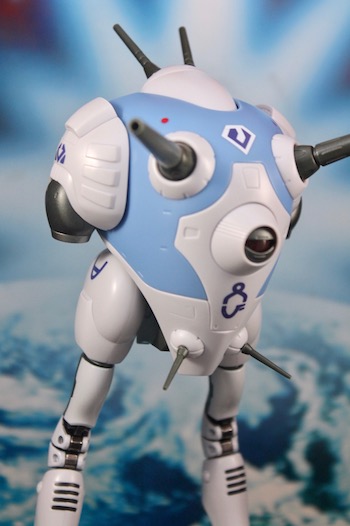 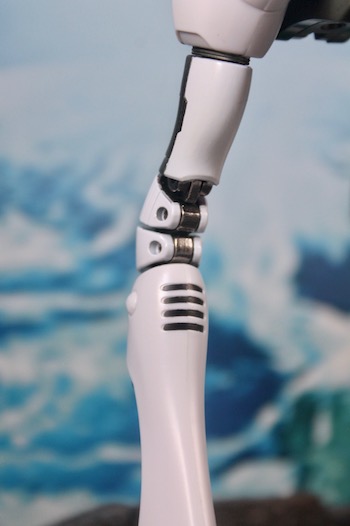 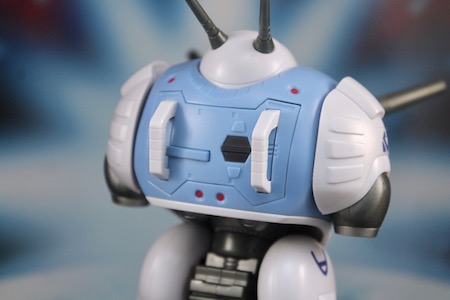 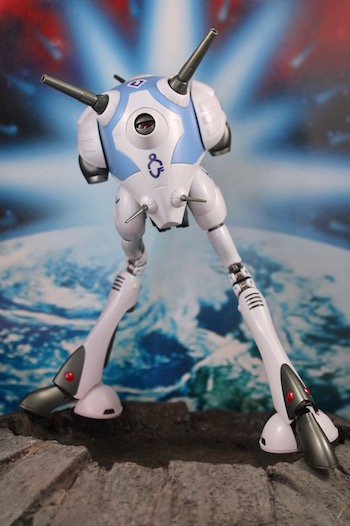 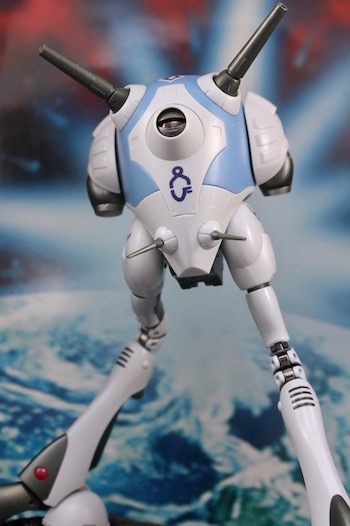 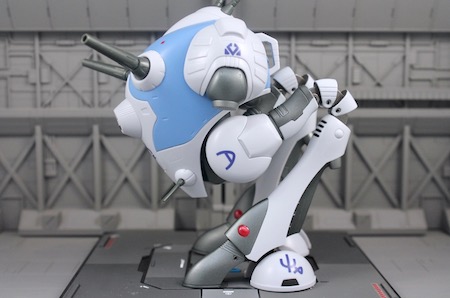 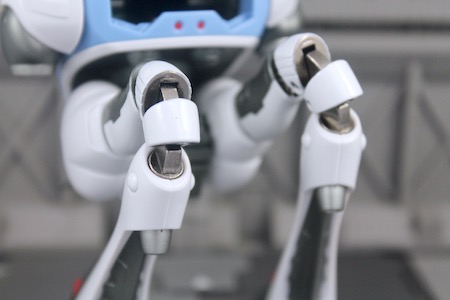 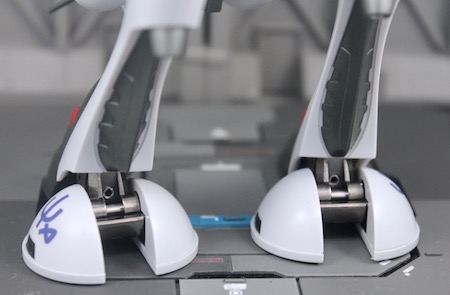 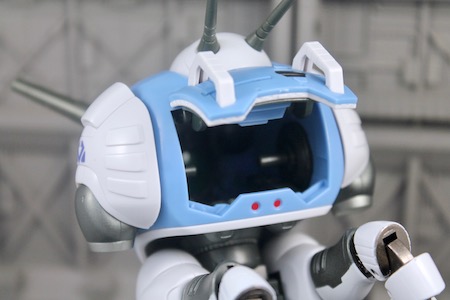 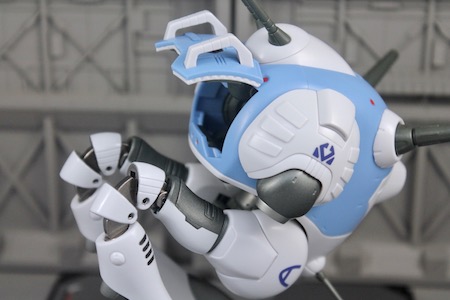 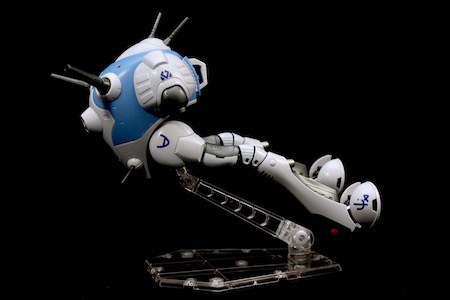 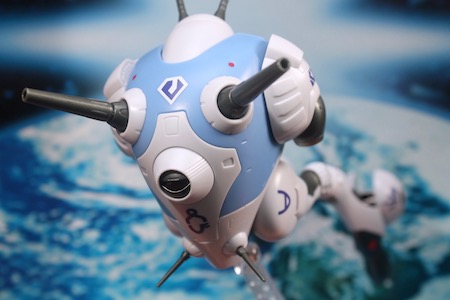 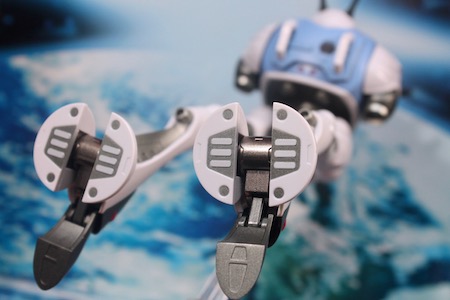 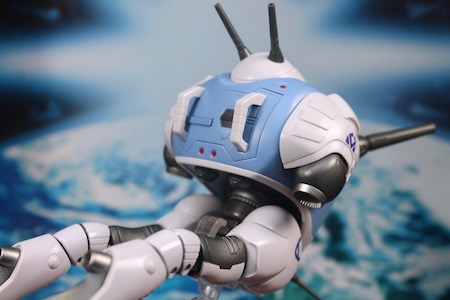 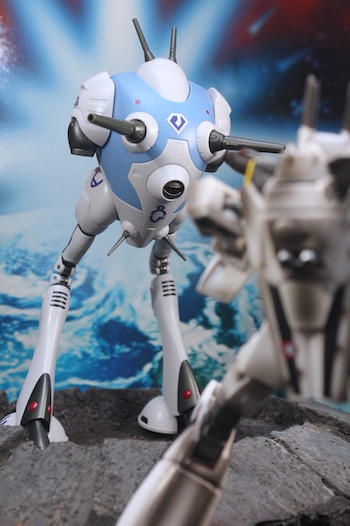 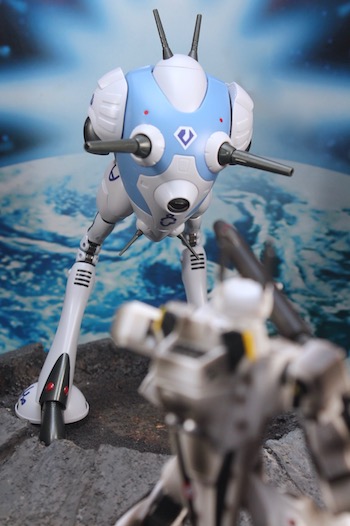 Certainly one of the most iconic Zentraedi military familiar mass-mecha alien enemies which still keeps me wondering why these highly advanced and intelligence male species, built this mecha, just to squeeze themselves inside the tiny pod to their discomfort. Even though the package looks inferior with window seeing through the toy in fragile blister tray insert, the toy actually weighs very solid and thin joints well enforced by die-cast. Just look that those pics I have taken to know the clever use of die-cast at strategic areas.

This toy stands approximately 19cm, pretty tall for HI-METAL series, towering over the valkyries in the same series which is anime correct. I would say its highly posable, enabling poses with legs wide spread apart to squatting position and even various flight poses with the aid of the clear stand parts and base. By the way, the stand parts and base are included in the set.

Both the big turrets on the top of the head and smaller turrets on the chin have to be fixed on the toy, nonetheless, the attachment process comes simple by just pop in. As a contingency, Bandai had thrown in extra small turrets in case anyone loses these small parts. Unlike 'Kaiyodo Revoltech', Bandai doesn't give extra / optional weapons such as the missile pod.

I was expecting the cockpit to open from the front, just like the 'Matchbox' and amazing in Bandai version, a more accurate function to open the cockpit from the rear as a gimmick makes it more realistic. I wonder Bandai would ever produce the pilot for this toy? There are a bit shows details showing the cockpit's interior and I presumed the two bars on the sides are controller handles.

More gimmicks such as the thrusters on both sides of Regult's head, are able to rotate. Overall, this Bandai's version is well sculpted nicely painted. The grey parts are painted metallic, the pale blue and light grey colours are very close to how the mecha looks like in the anime. There is no need for any stickers since the red and awesome looking insignias are all prepainted. A really great toy which self explained why the value of the toy had got up!
at May 28, 2017

Well, when collectibles like these, featuring diecast parts are released, you should expect a higher price tag attached, mainly because diecast molds are more expensive to produce and this kind of toys require specific finishes which are also more pricey... However, the outcome is usually better, not to mention that they offer greater durability so, it’s expected an increase in value over time... Your Regult looks awesome, all the surfaces are super clean, the decoration was neatly applied and the articulation is optimum !!!... But I still prefer the Valks, pal =P !!! =D

Yeah bro! Back with some Macross!

>> Chrismandesign
I was hoping for a bigger Regult still I glad to settle with this. Mine has quite a bash up box but good thing the toy is still excellent in condition. I like Valkyries more too and this make the Valkyries stands up more.

The leg joints are awesome and the balancing too! I couldn't get this because of the price and budget...

If you have macross figure, this is a must have :)

>> Leon
Indeed robust and well articulated joints this toy has. Is for the price tag, it still below the VF-1S and GBP.

Desmond
True bro, the Valkyries needed the aliens to fight with in "Toy Story" ^_^
Good props as well.