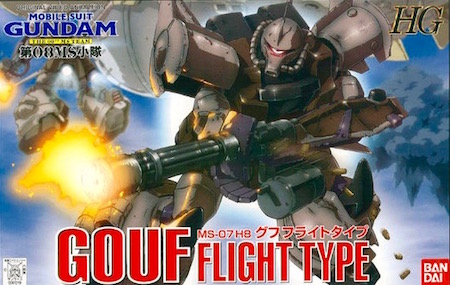 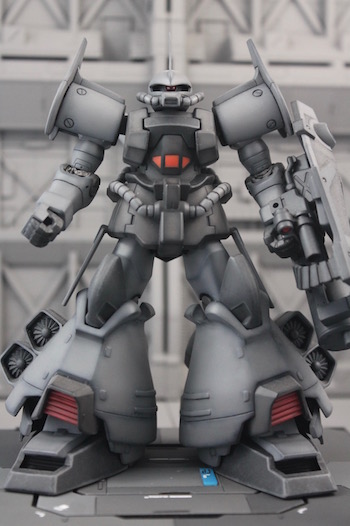 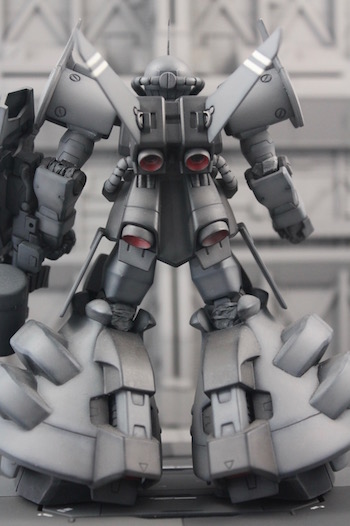 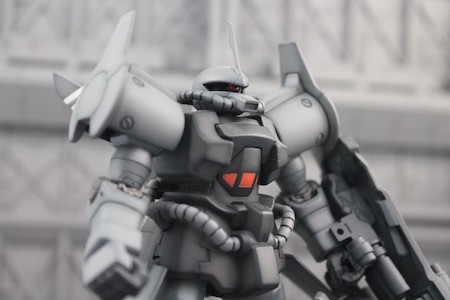 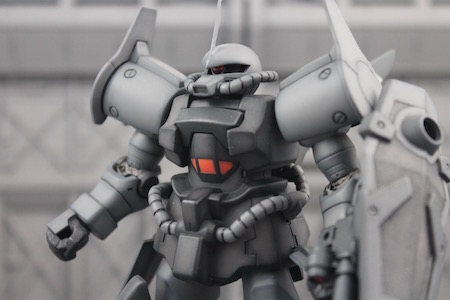 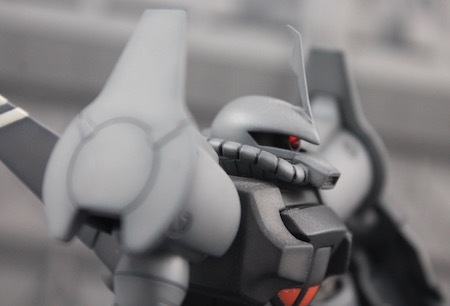 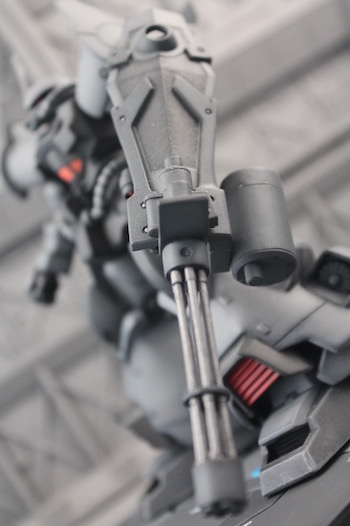 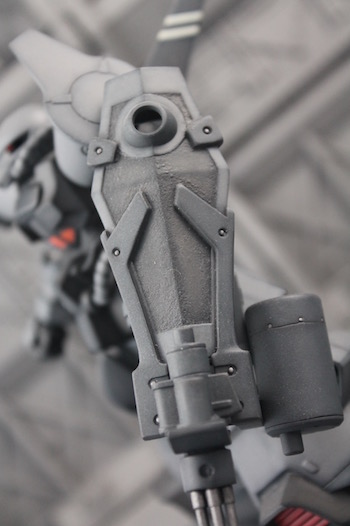 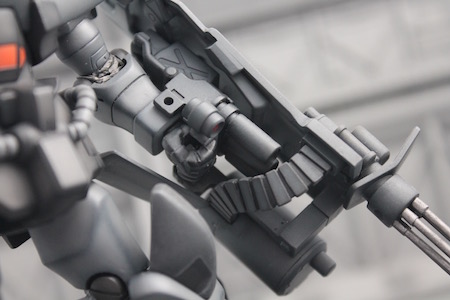 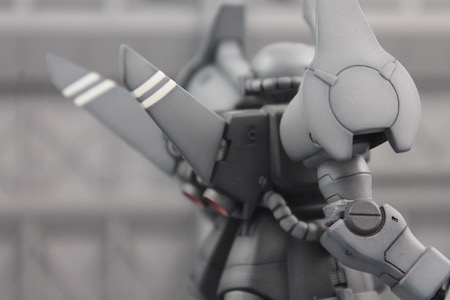 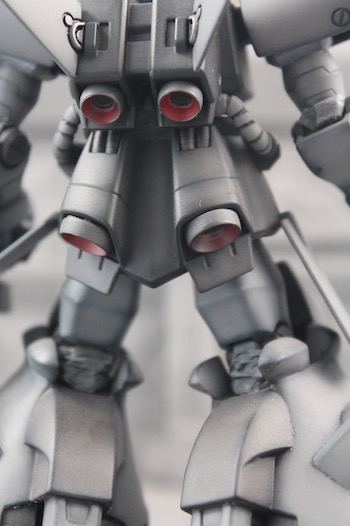 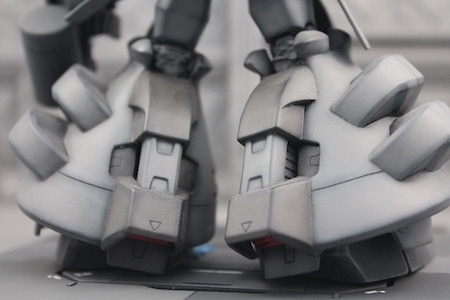 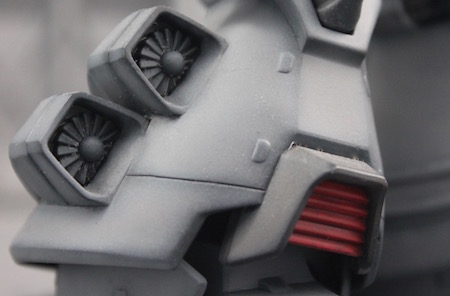 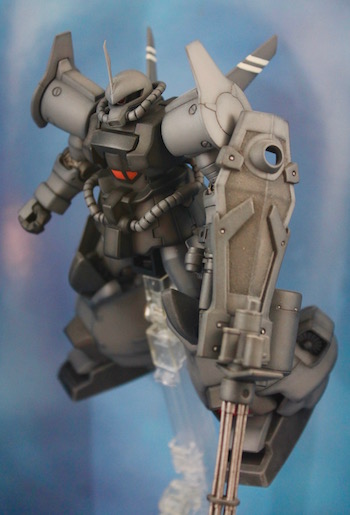 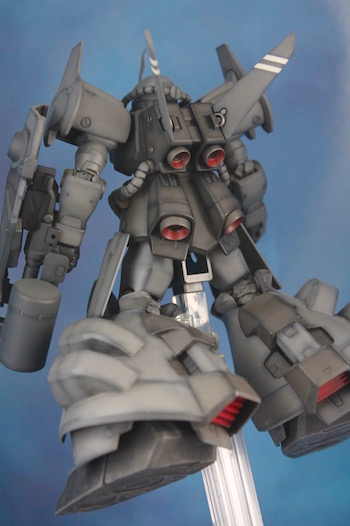 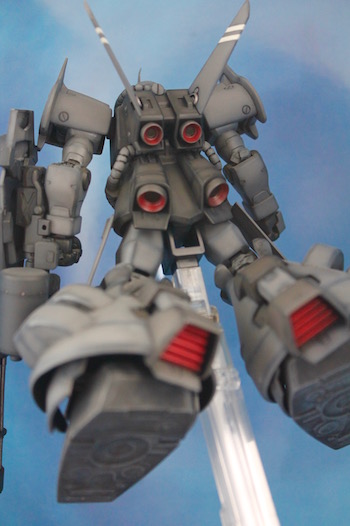 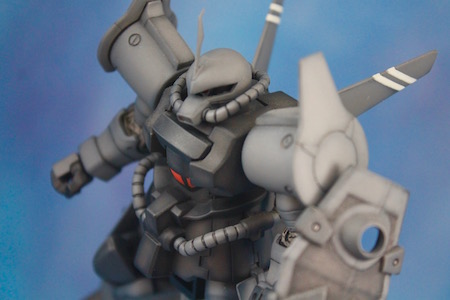 Making its first appearance in the Gundam OVA '08th Mobile Suit Team' as a prototype mobile suit. One of my favourite mecha anime of all time. Improvised Gouf that hover on the sky without relying on flight craft. Unfortunately, Ramba didn't live to pilot it : ( Only a few in numbers deployed in escorting Apsalus and final showdown defending Ginias Saharin's southeast Asian base. Nice colour scheme like a fighter jet. The flight capabilities lies in the improved backpack fitted with more powerful thrusters and thermonuclear jet engines. Check out those propellers on the bell-bottom legs. An awesome weapon of Gouf flight really is the gattling gun mounted to shield.

This is considerably an old HG kit and the proportion slightly bigger than the later HGUC kits. I'm reviewing one that was built and modified by Kenny Ang. As u can see the antenna on head was sharpened so fine that I was afraid of breaking any fragile parts. There was a lot of putty applied and filing done to remove the seam lines. Of course, fully air brushed and weathered. If you are a fan of Zeon suits then you will love it.
at February 16, 2016

Didn't know this guy had a kit!

Saw this guy the first time in Gihren's Greed. Fluff-wise this guy is the one of the earliest Atmospheric-flight capable MS in UC era but it was not until like late-UC that its kind were more widespread, until then Most MS will need SFS to even fly. Perhaps if Zeon survived OYW the tech would have been in wide use even faster.

>> Yami
Gihren's Greed is one of the best strategy games of Gundam, just that the beginning can be a little hard. Zeon prototypes are cool and some were adopted by their adversary after OYW.

The Gouf surely took Zeon mobile suits a step further in terms of attack power, fear factor and maneuverability, way before than other suits used by ace pilots... I knew about the Gouf Custom, because I love its design and hopefully I will get a kit of this model for my collection... However, a Flying Gouf certainly was out of my radar... I must say that the work of the modeler (Kenny Ang) is commendable here, but all those delicate details here and there, along with the bulkiness of the model itself, impairs the poseability of the figure... =D

>> Chrismandesign
I have to agreed that the bulky build and delicate finishing does affect the poseability at certain degree. Still, the excellent work by Kenny Ang outweighed the poseability factor and the customisation greatly improved the outlook of this old kit.

The colour scheme of the figure looks bored...