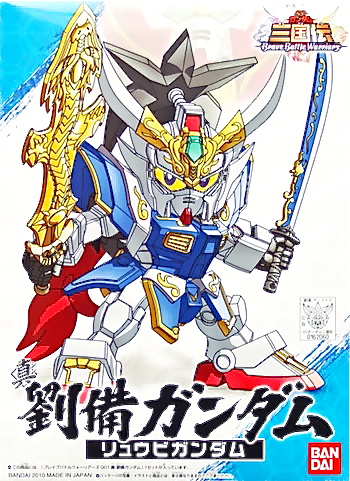 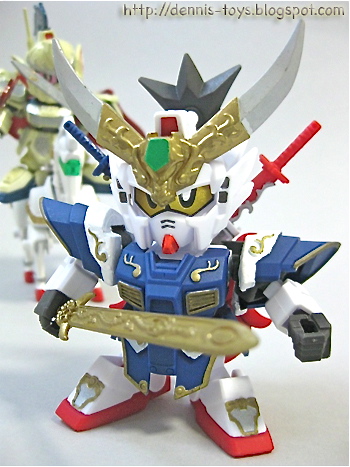 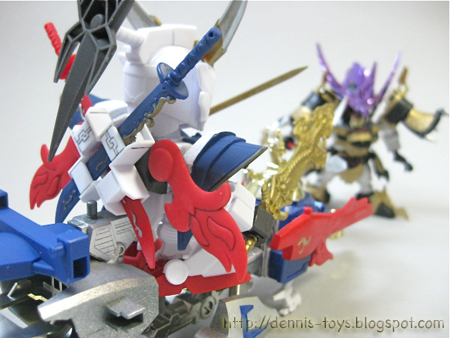 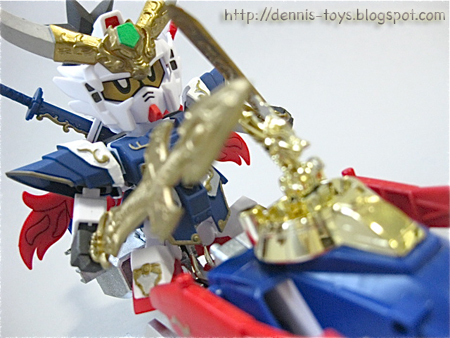 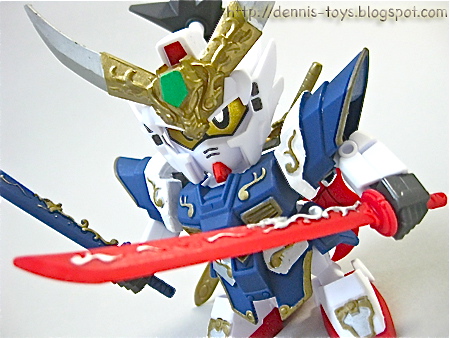 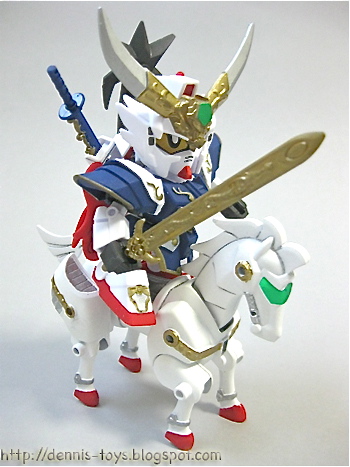 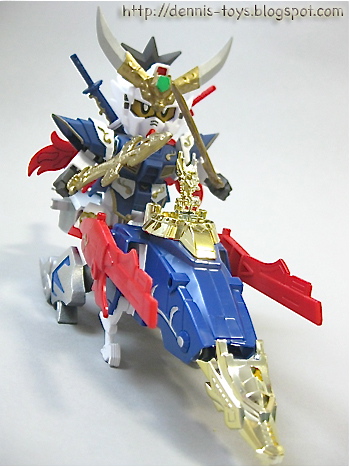 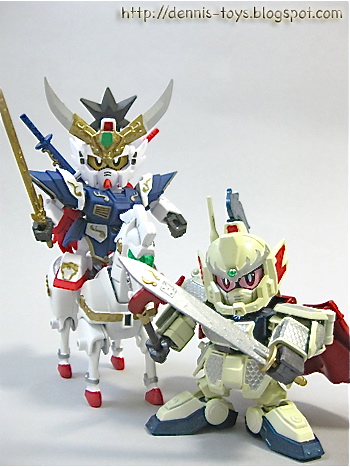 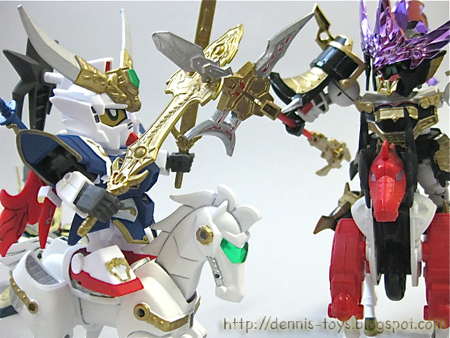 It's kind of hard to resist not getting more of these adorable SD Sangokuden kits especially when I continue to watch the anime series from where I stopped after the battle of Hu Lao Gate. This time round, I'm charmed by the lead character Ryubi Gundam. Ryubi Gundam takes the basic design of RX-78-2 and the role as the heroic Liu Bei in 'Romance of The Three Kingdom'. In Sangokuden aka 'Brave Battle Warriors', Ryubi is compassionate towards the people of Mirisha. Wielding his two sabers Dragon Fang (Garyuutou) and Claw (Souryuutou), Ryubi defended his people with his strong sense of justice together with his sworn brothers.

Also not to forget the powerful Imperial Dragon Sword (Tengyokugai) which his mentor Cannon GM Lu Zhi, had entrusted him, after seeing his potential. Imperial Dragon Sword becomes more fearsome when Ryubi Gundam fused with the Imperial Seal (Tengyokugai), riding the Celestial Armour Dragon. I have spent a little more time on this kit, carefully painted it with gold, silver, red and white marker. At certain point, I had to use toothpicks dipped with paint to touch up fine contours. A bit of panel lining before a matt top-coat. Ryubi Gundam looks cool riding White Silver Comet Horse (Hakugin Ryuuseiba) that I had built previous and even more awesome when I placed Ryubi Gundam on the Celestial armour that came with Ryofu Tallgeese kit. The whole combination are perfect!
at December 04, 2011

Very nice and love the details. The sticker kits are nice, but the added touches really bring it out.

I have gotten a few SD Gundam kits myself. I need to get the markers/paints as well for my kits. Any recommendations?

The only stickers I used on this Gundam are the green patch on the v-fin and the eyes. I have 2 chrome markers for each colour like gold & silver, one thick and another thinner tip for fine areas. Those small area like the chrome on the sword, I had to used toothpick dipped with paint to add the colour.

the Ryubi mecha design is nice indeed, but i would like to see it in a not SD format, i mean, something like the Musha Gundams in MG size... i think the golden and silver accents would look great (in plate finish)... however i must say that the enemy looks a lot better than his good counterpart =)

I also think the characters would look great if they are given the chance to be presented in their regular form, maybe in 1/100 scale. Bro, you got good taste cos Ryofu Tallgeese was my first BB Sangokuden kit. I love the character as well as the design. Nothing beats 1st love. Lol...

My skills are definitely overrated bro. Can't really out do what I'm doing now. I have also bought Sun Shang Xiang which has pink and adorable. Will do it given more time. Lol...