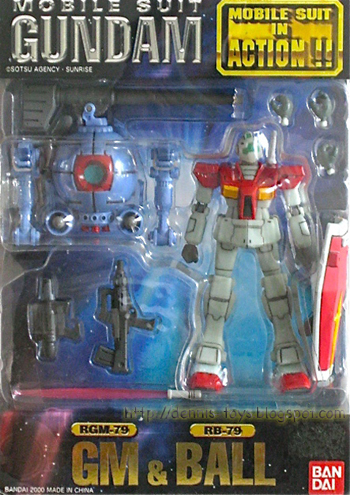 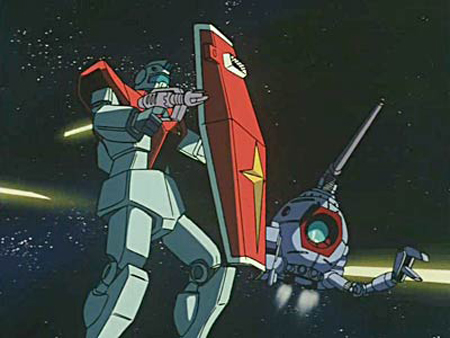 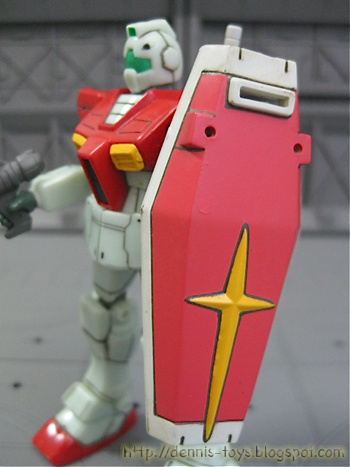 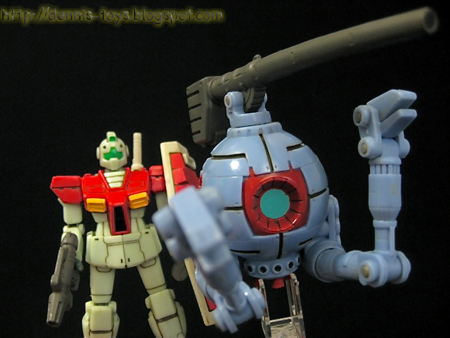 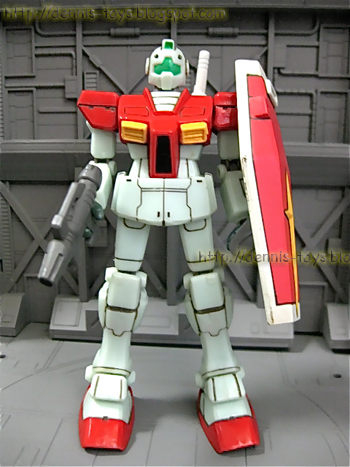 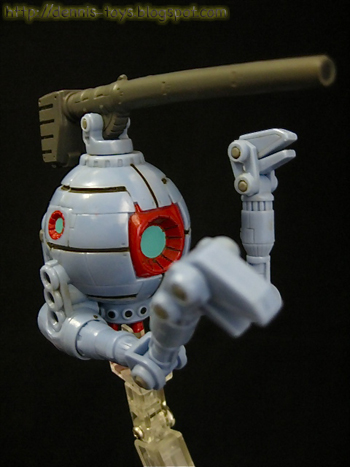 Even though Gundam is the main focus during the One Year War, we must never forget that the war was fought mainly by the GM & Ball which served as the bread & butter of E.F.F's primary strike force in space. E.F.S.F had this excellent strategy of using Ball as long range artillery in bombarding Zeon's MS before GM close in to engage them. The value of GM and Ball clearly must not be underrated. Since the two complimented each other so well, Bandai had this brilliant plan to sell them together as a set in their MSIA line. The GM figure comes with optional hands, standard shield, spray gun and rifle. Ball has hyper-bazooka attached on top and ball joints for the hands. Produced in year 2000, this toy is more  than a decade old.
at October 14, 2011

i never knew bout the role of this Gundam Ball till this post of u... this MS reminds me a lot those mini-sub for ocean investigation & i didn’t realize its role as a battle companion until i looked above it & said "it could b a big cannon, right ???" (very perceptive of me HAHAHAHA...) BTW this cannon has a sort of erectile dysfunction isn’t it ??? HAHAHAHAHAHA... just kidding, i do know bout the problems with PVC figures... nice figures pal, very in ur Gundam style/taste =)

I always wondered how the Balls never started spinning wildly after they fired. Mus have one hell of a counter gyro to keep it in place.

I love the balls. Lol

>> chrismandesign
You are so right about the problem with PVC that it's difficult for the plastic to deficient gravity. The canon on the Ball started to bend with time. I had read manga on the after war based on Johnny Ridden which mentioned that Balls were like sitting duck before E.F.F produced had any MS.

>> bluedrakon
In practical, Ball is very much useless in war and used for the purpose of reconstruction of space structure after war. I guess counter gyro to keep it in place after firing its canon is a main issue like how it was shown in Gundam 08th Team.

>> LEon
Ha! Ha! I know you have always been a fan of Balls through your review on the kits. The outlook of Ball sure is cute.

You'll be interested to know that a HGUC 1/144 GM + Ball kit has been recently released (0083 Stardust Memories ver).

Sounds interesting. I know the exclusive RGM Type-C with Ball in HGUC but the it's kind of over price. Was waiting to see how.

The HG and MG would be a better alternative. For the details.

According to official reports, from theTory Burch Reva Ballerina Orange
"Mekong massacre," the most recent case was in late September. September 21 afternoon, the Chinese cargo ship "contains Xin number" in the Mekong River channel downstream location when the old Burma border, was robbed by unidentified armed men intercepted.
Currently, the region has not only the presence of anti-governmentpeep toe low heels
armed forces of Myanmar, is the most rampant illegal activities of armed groups, the more border smuggling, proliferation of weapons and drugs one of the areas in the near future to address navigation safety issues there are some truly more difficult. Insider said: "This incident is concerned, find out the truth is a priority, and eliminate tory burch purple flats
illegal armed along the Mekong River shipping is the key to continued development."
Yunnan local people believe that if the crew on the Mekong "risked their lives" a living situation can not be changed, after the parties made for the development of the Mekong River shipping ten years of effort will be completely wasted. If you do not solve the security problem, this radiation very wide range of important strategic tory burch corey mid calf bootsignificance of the "Golden Waterway" may decline or even abandoned.
However, an obvious question is to eliminate illegal armed along the river, along the diplomatic collaboration between governments is essential. Some experts believe that countries should immediately set up along the special joint law enforcement agencies to effectively combat the illegal armed endanger the safety of waterways, the murder occurred in the Mekong River is perhaps an opportunity.