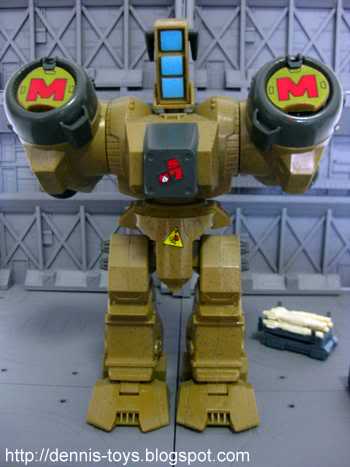 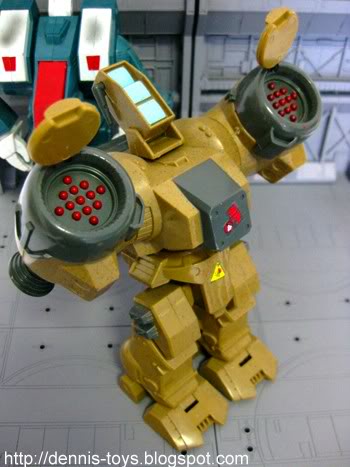 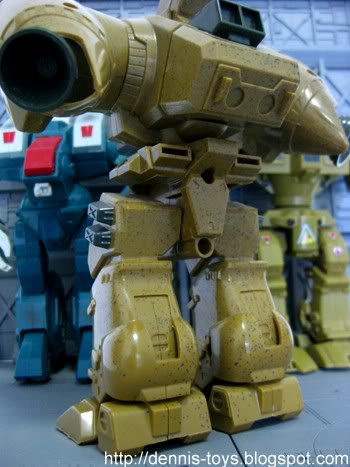 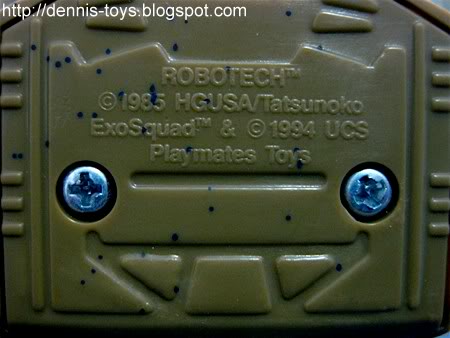 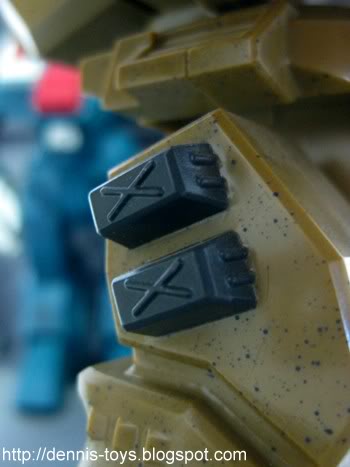 Here’s my loose vintage Robotech Phalanx by Playmates. The foot of the toy says Exosquad but it never appears to me that Phalanx was part Exosquad cartoon. Phalanx role as a destroid is limited to just arms missiles pod releasing missiles to marching Zentradi mecha. This toy lacks details and articulation, but the durability of this toy is no doubt.

Like the Defender, the Destroid Phalanx was based on the chassis of the MBR-04 Destroid Tomahawk. First designed and deployed aboard the SDF-1, the Phalanx was intended to serve as a walking missile battery, capable of delivering air defense missiles to protect the SDF-1 from Zentraedi attacks. Late in the First Robotech War, this mecha was refit with reflex missiles and used in the final massive attack against Dolza's fortress. After the First Robotech War, surviving mecha were dispersed to protect airbases in New Macross and near-by cities, like Monument.

The mecha is equipped with vernier thrusters, making it capable of limited space operations. In most cases, the mecha was used on the deck of the SDF-1, and its capacity to maneuver in zero gravity was limited to propelling itself back toward the ship's
at February 04, 2010

Im starting to see some Irony here, the cannonfodders gives more of a durable build compared to The complex frame of a Valkyrie.

Is the top part of the phalanx a head light or the cockpit.

i’m begining to love these old fashion mechas... i noticed another inconsistency or curiosity, it says Playmates Toys there or i’m wrong ??? then why Matchbox ??? there is any relationship between these companies ??? errrr... & r u showing us ur next posts unconsciously ??? is there life in Pluto ??? @___@

I like how you used the sets you got for the background with the other Macross figures.

I seem to remember that they re-used some of the Macross figures for this series.

>> GunStray
I also feel that Cannon Fodders seems more useful but Phalanx such is better as a defender due to it's firepower. The thing on top should be a radar. Hee! Hee!

>> chrismandesign
Thx for correcting me. I'm too engross thinking that Phalanx also by Matchbox cos it's of similarities with my other Matchbox destroids.

>> Bluedrakon
Thx pal. Just trying to make the pics more interesting. I will do more of these more often. Cheers!

Playmates released a number of the Robotech toys as ExoSquad products, citing them as 'inspirations' for the Exo-Squad line. They also took efforts to make the colors more realistic, add in a lot of nice decals, and re-tool a few elements here & there. A very thoughtful effort on their part, I think.

A couple of years back I found a very nice knockoff of the 1/100 Takatoku variable Valkyrie toy which was scaled up to just a little larger than these Destroids. You could almost believe it was a 'lost' product intended for this part of the Robotech line!

>> Ray
Thank you for the heads up! It's really helpful and has cleared much doubts I have on this toy.