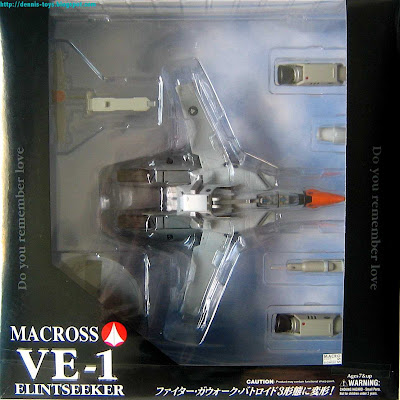 Front view of the box 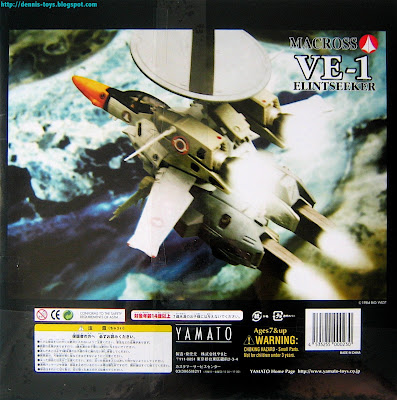 Back view of the box

Side view of the box

From my collection is this Yamato 1/60 scale Elintseeker. I'm pretty sure this valkyrie would soon face out once Yamato announced it's perfect transformation version. I have yet to take the toy out from the box but the toys seems very detailed from the pics on the box. Didn't quite like the box cos it too big for a 1/60 scale valkyrie. The interior looks kind of empty when looking through the window. I got the below narration of Elintseeker from a Ebayer sometime back...

VE-1 Elintseeker is a Double Seat unarmed "electronic warfare" or "electronic intelligence seeker" variant (first seen in "Macross -Do you Remember Love?". Includes rotary radome mounted on FAST Pack boosters, radio antennae on arm pods, and side scan radar on conformal leg pods. The VE-1"Elint" Valkyrie was created by the SDF-1's engineers when the Glamour ES-11D "Cat's Eye" was found to be too deficient in combat survivability to fully fulfill its role as an Elint/AEW craft in the more hostile environments. Derived from the Super VT-1, the VE-1 sports a major avionics upgrade including a rotary radome dish, side mounted surveillance radar, and an advanced communications detection and jamming suite.

The Elint Valkyrie first saw service in the battle against Badolza's armada. The VE-1 performed its mission flawlessly in space, but was not well suited for atmospheric conditions do to increased drag. Wind sheer limits the Elint to a top speed of Mach 1. Any faster, and the advanced avionics suite will be ripped off. Though it could carry less electronics than the Cat's Eye, the VE-1 is much more survivable in close quarters combat engagements. However, the VE-1 itself in unarmed and must rely on escorting Valkyries for protection.
at August 16, 2008