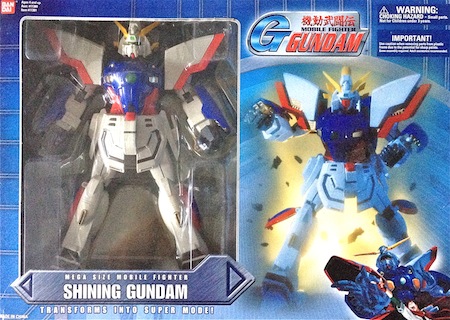 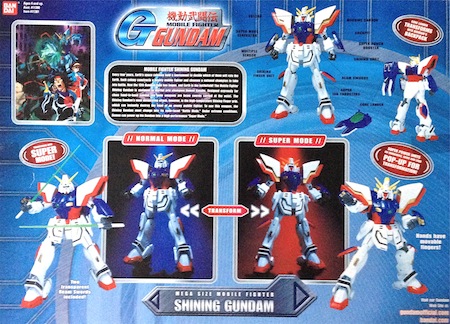 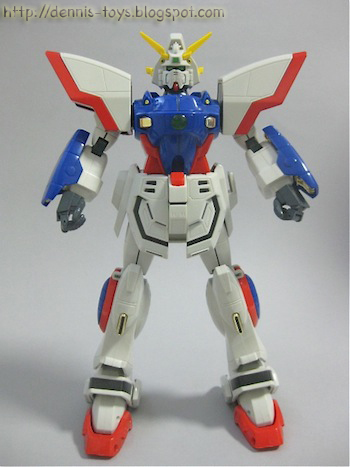 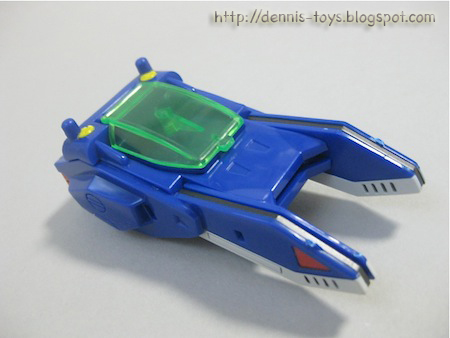 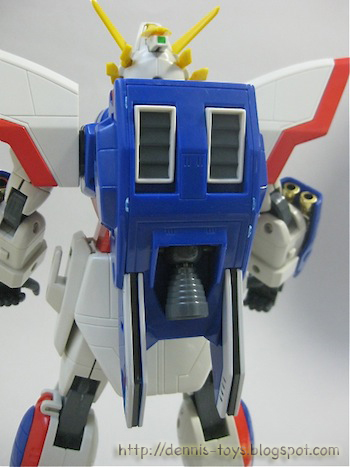 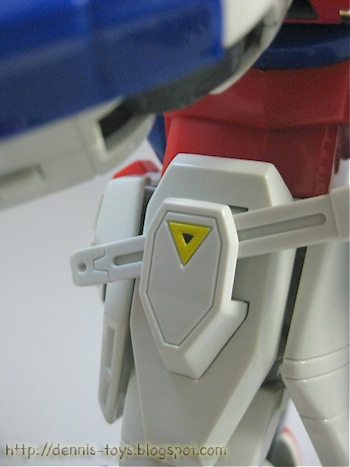 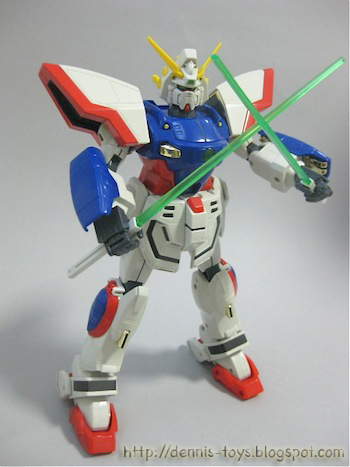 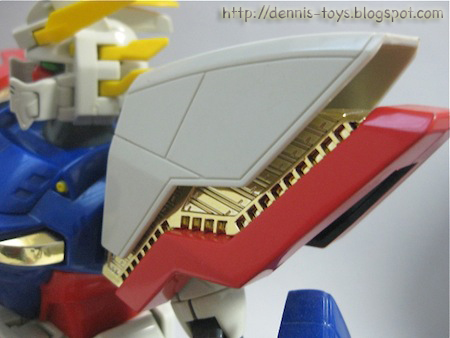 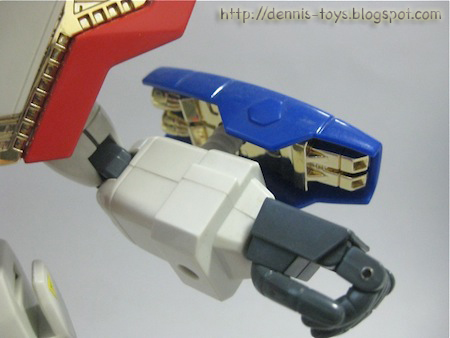 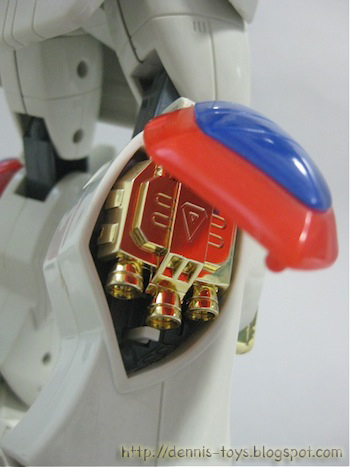 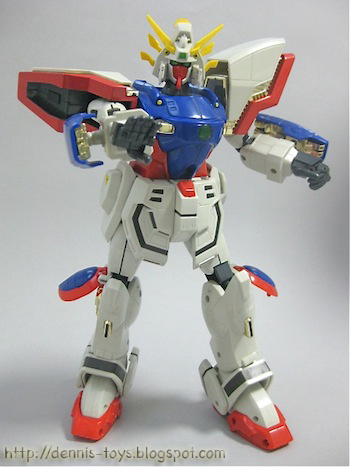 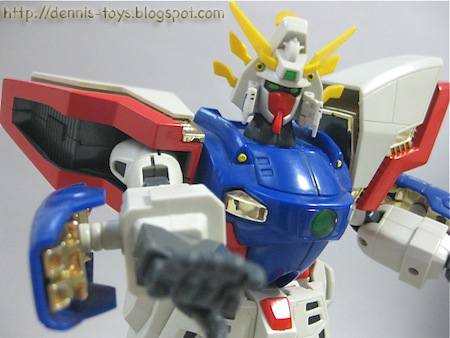 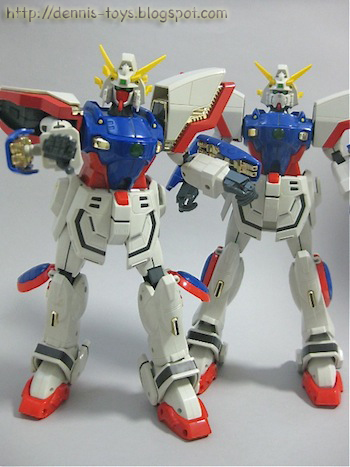 Looking back at my posts during the early days of blogging, the content and pics were rather obnoxious. In order to serve you better, apart from reviewing new toys, it's also a continuous process for me to do some facelifts to my old postings, like this Mega Size Shining Gundam which I had bought back in year 2008. The toy was a U.S released, therefore it was scarce in Asia region.

This is the kind of toy that will catch anyone's attention when they visit my house. Standing 13" and towering most of my other toys. Easy to handle and poseable with little problem executing its signature melee attack 'Shining Finger!'. It has a attachable hatch pod that could be engaged to the back of Shining Gundam. The saber handles can be drawn from both sides of the skirt like a samurai. A strong characteristic for a Gundam representing Neo Japan in the anime series 'G Gundam'.

Some interesting gimmicks of the toy that enable Mega Size Shining Gundam to switch into Super mode would be the adjustable spikes on the head, plus a face change. The shoulder armours lifted up to reveal the chrome valves, pop up action on both forearms and covers on the legs opened outwards to expose the additional thrusters and finally flipping back the ankle guards.
at October 02, 2012

I’ve recently visited your blog and may say that it is both delightful and admirable, no one could have done a better job! The pictures are indeed adorable and the content is extremely interesting. This is the case when I have a chance to call your blog charming and captivating at one time! I’ve immediately added it to my favorite links and cannot imagine a more outstanding place to spend my time at!

I am really touched by your encouraging words. At first I didn't think anyone would visit my blog. That's way I have not inform my friends that I actually started blogging on my toys. I am also afraid that my friends would even find me childish. Anyway, I really want to say a big 'Thank you' to you cos you are the first to comment on my blog. You have a nice day!

Very cool one to have since it was in the US. I do like the gold parts of the figure as it gives you a different version to play with.

It is kind of crazy as these figures are going for prices similar to the GFF series here now.

This is the kind of toy that is made durable and the chrome is still good after I had display it for a long period. There used to be quite a number of these selling on eBay but time passes, the availability reduced. Maybe it will soon be regarded as vintage so that's why the value went up. Cost it a lot too when I had to pay for the shipping for this massive box.

This one is tall and quality of the figure is good :)

Taller than HT unless its Hulk! Ha! Ha! I'm surprised the chrome is still shine after these days of display. Hardy toy indeed!

actually i was updating all my post from the beginning (mainly the pictures and "retouching" the drafting) and it was a hard job !!!... also i decided to put my logo in all the pictures since i realized that some people were using them to sell the corresponding items without my authorization and that was abusive and annoying =@@@@@... the only post without updating is my very first EVA 00 model kit, since it’s my "guinea pig" to test my painting skills... once i get something "decent", i will update that post and will begin any other paint job...

on the other hand, this figure is pretty nice, specially in the Super Mode and has that vintage touch that i began to appreciate... =)

I think having logo, insignia or watermark like you guys have are kind of cool and I wish, I'm good in my art. Hee! Hee! Understand, it can be kind of annoying when other misused your photo or worst still make profit out of your pics.

It might be tedious but I find reblogging these posts worthy of better archives. Always nice to reappreciation my toy again.

Cool that you have not 1 but 2 of this figures!

My old habit of buying 2 same toys. 1 for display and another MISB. I had scrapped the collecting method. Had sold one of them and only keeping the remaining one.