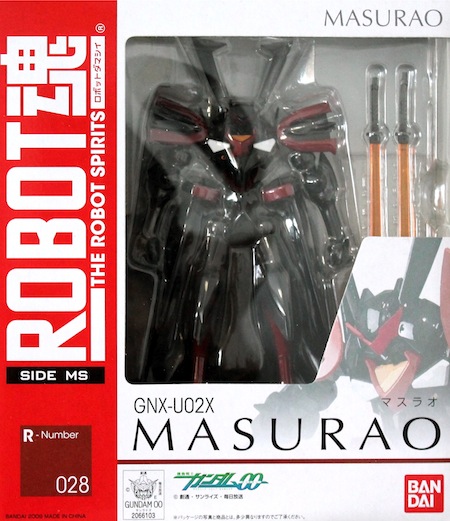 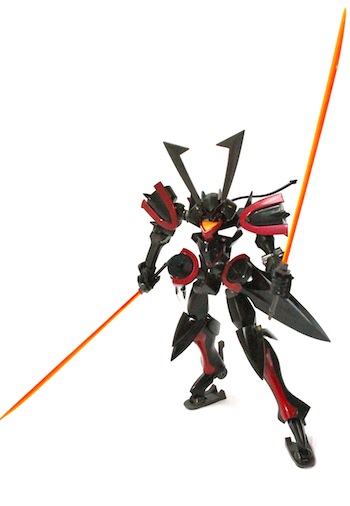 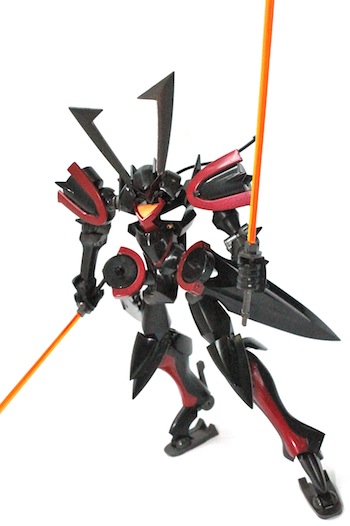 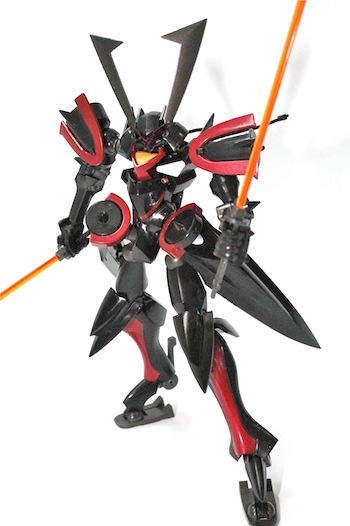 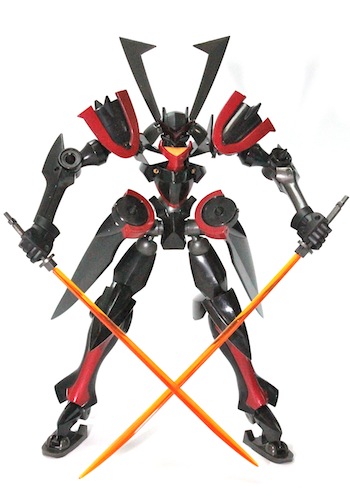 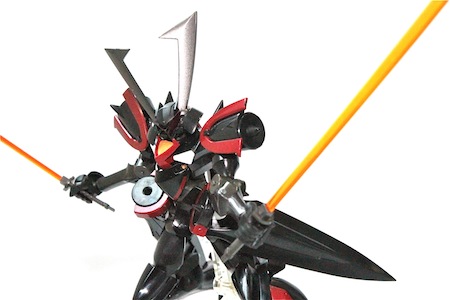 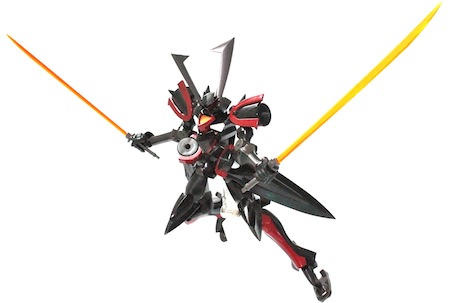 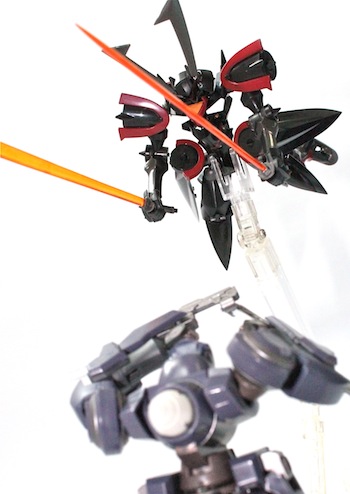 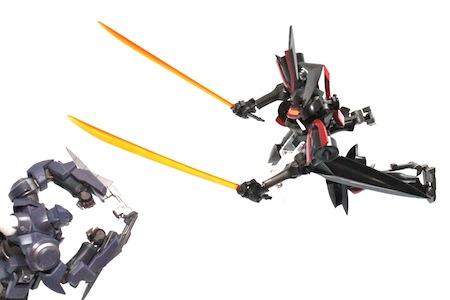 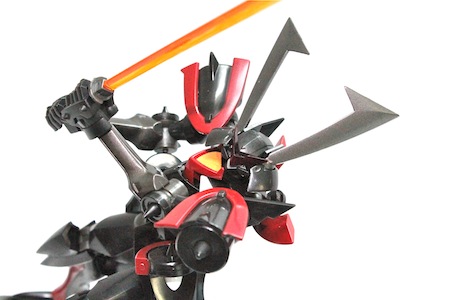 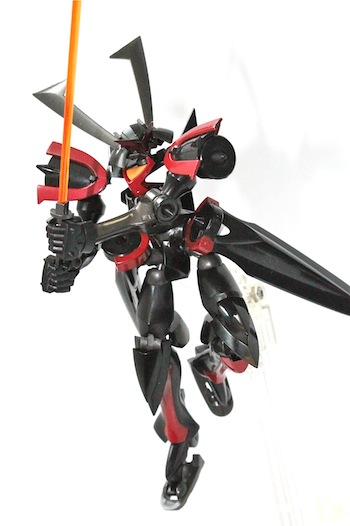 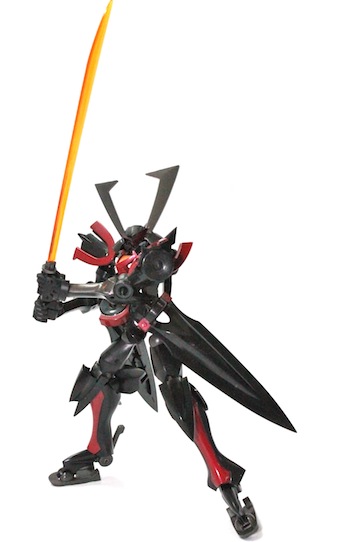 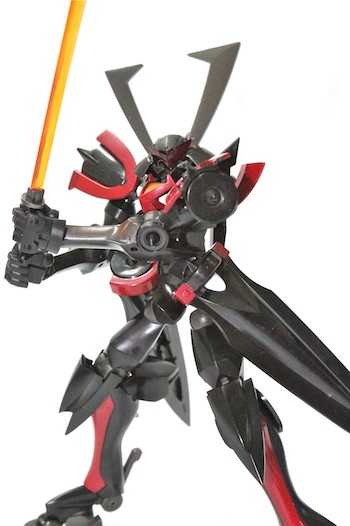 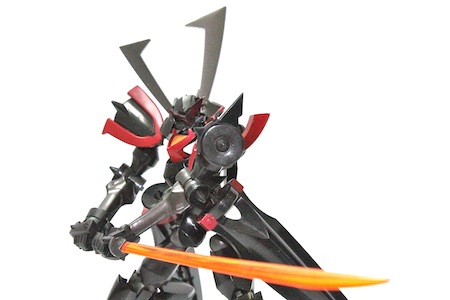 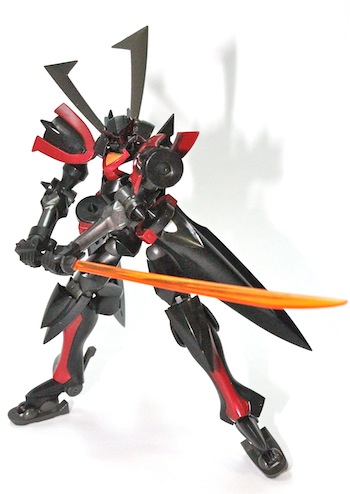 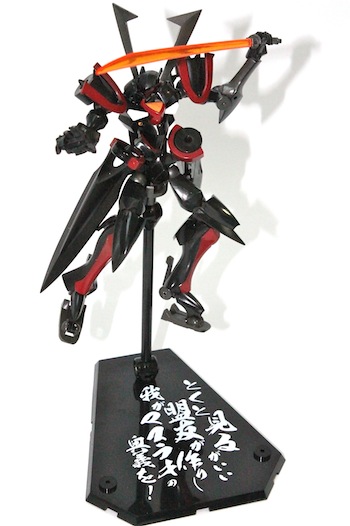 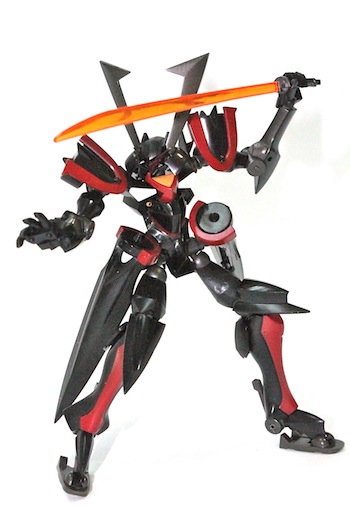 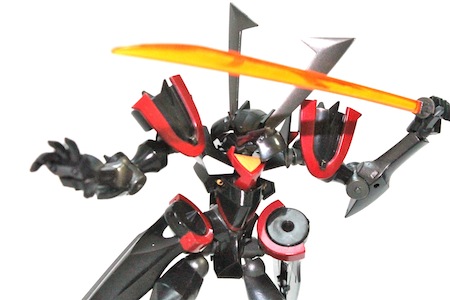 Masurao GNX-U02X was featured in the 2nd season of Gundam 00 and was piloted by Graham Aker under the disguise of Mr Bushido. I could not imagine a caucasian disguise as a Japanese just by changing attire and by putting on a mask but it always happened in the world of gundam. Anyway, Masurao GNX-U02X is not exactly my cup of tea but as Robot Damashii figure, it's extremely posable, with 30+ ball joints and swivel joints that I was surprised by those poses doing this review. I not understand Graham's sudden knowledge of ancient Japanese sword art and his fascination for samurai and ninja ... so much so Masurao was designed with a samurai helmet with a ninja body frame.

The sleek design is probably Graham's love for FLAG. Even the mecha was built for melee with beam katana (Long) and beam wakizashi (short) which he named the katana 'Howard' and wakizashi 'Daryl' in memory of his passing FLAG comrades. With the colour scheme black, it hard to tell the plastic quality, but the finishing looks great which the gloss surface made the product really photogenic. Figure comes with extra pairs of optional hands and a unique black stand with a mixture of Japanese character and kanji.
at July 06, 2014

the Gundam 00 saga was set in an alternative future (if i’m not wrong), hence the extremely different mecha design (which is simpler and lighter than in the original series)... since i have the Union Flag, the Masurao doesn’t look quite odd for me, yet in the model kit and action figure forms it looks a tad "weak", specially for the melee combat, but lighter usually means faster and there is a sort of balance in that sense... the samurai inspired design is always stunning, a sound choice in this case !!!... =)

My interest for FLAG unit has grown slowly which I admit I didn't quite like the sleek design in the first place. It was after having the 1/100 kit that I found it nice and all the descendant design made sense to me. I guess it's expected that the Japanese related honor to samurai and in this case of a mobile suit.

Is this your friend's toy?

Yup! My friend Stanley would pass me toys to review for time to time. Just that I'm pretty slow to review them. My bad hehe

I have the HG version for this! and its articulation is cool even though the side skirts are a pain and keep drop off. Love the display stand with the characters.

It seems like the kit and damashii of this mecha hit it off well. They have become quite rare. With the sleek design, its articulation sure better than those MS with armor all over. Agility is the essence...