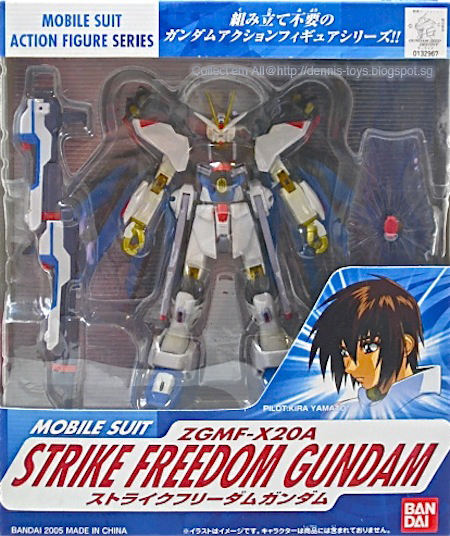 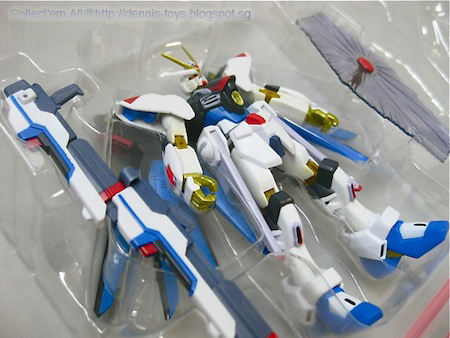 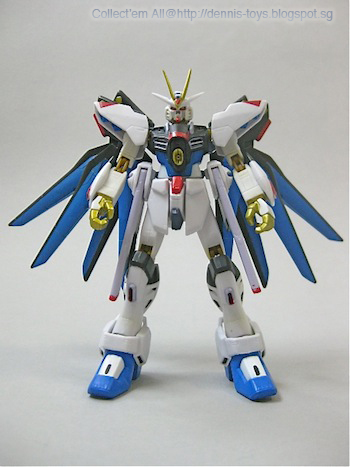 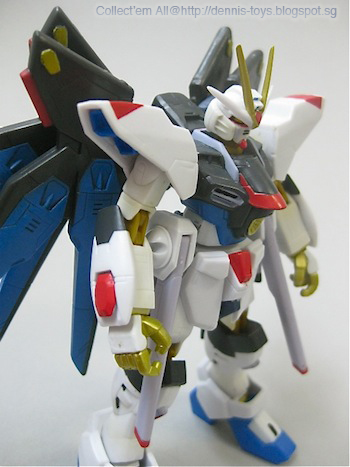 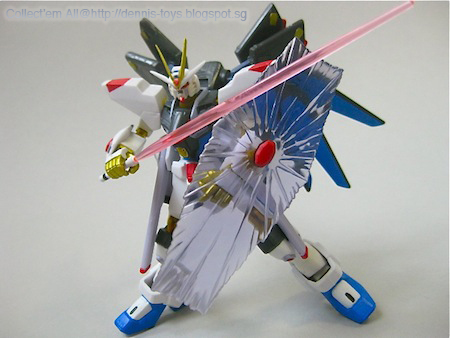 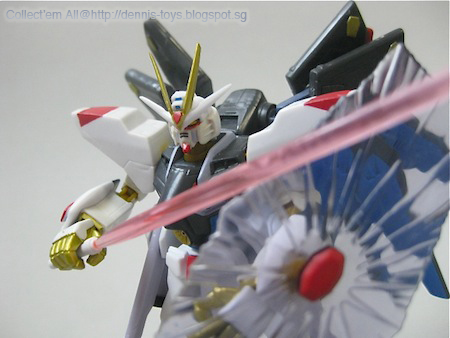 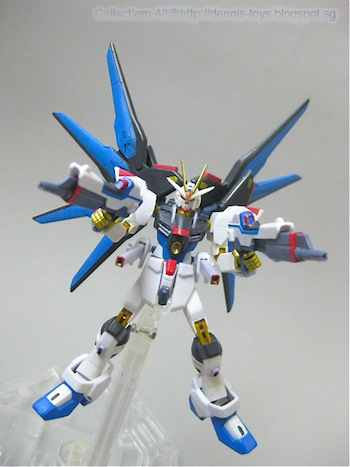 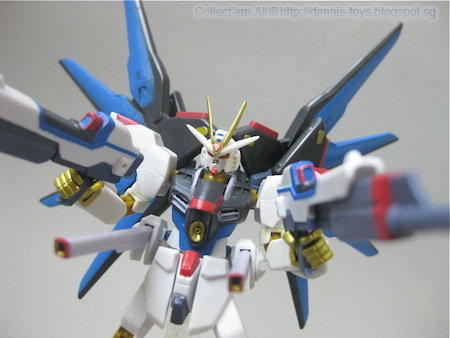 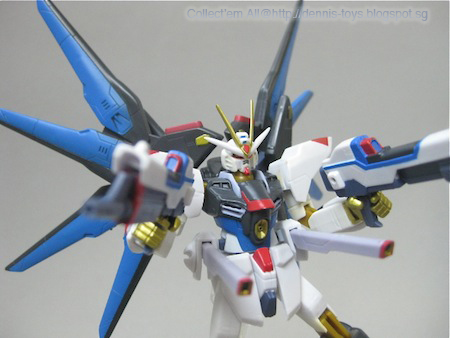 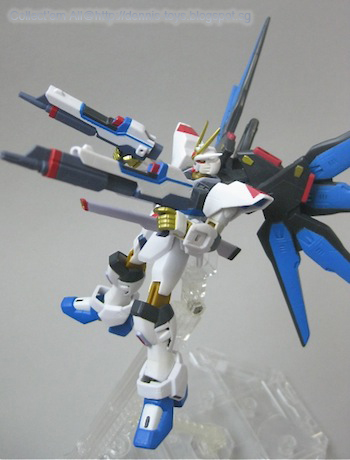 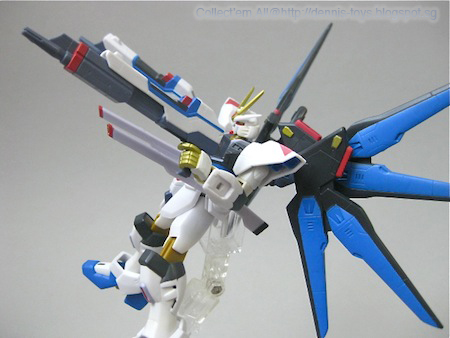 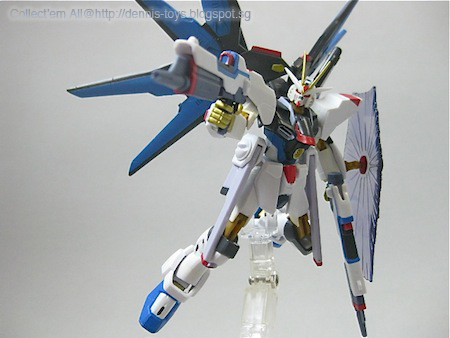 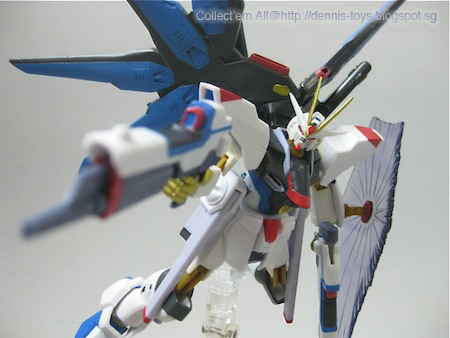 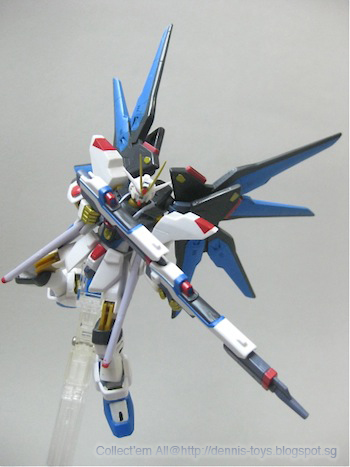 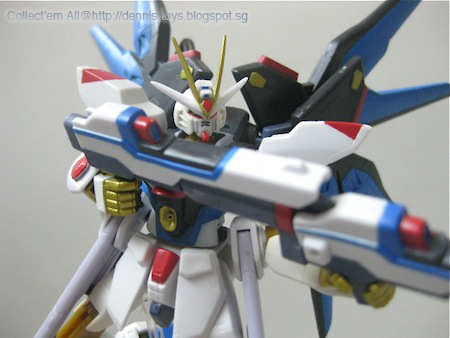 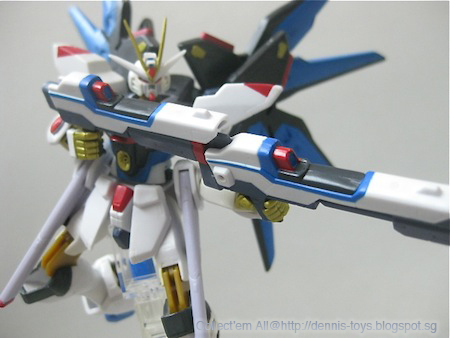 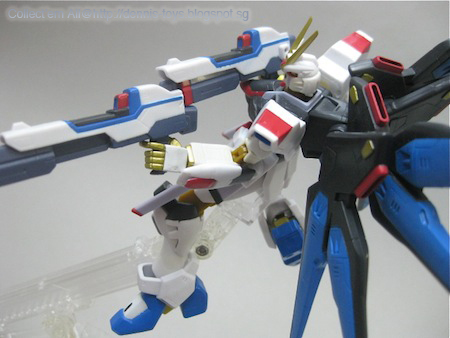 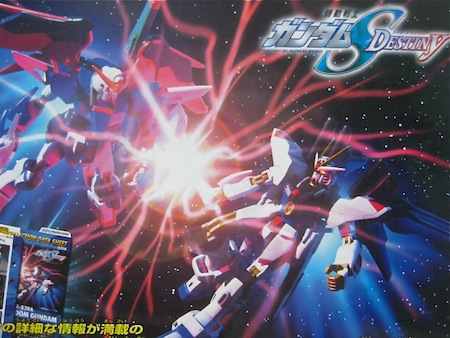 I'm just in the mood for more Gundam reviews from 'Mobile Suit Gundam Seed' and today's feature toy is a production discontinued, 5" action figure from MSIA (Mobile Suit In Action) released in July 2005. A Gundam toyline in its glory days before the migration to Robot Damashii. Fairly well made action figure of ZGMF-X20A Strike Freedom Gundam.

I can see good sculpt there, tight limp and ball joints even the rotating railguns and rifles attached to the upper torso ,good gimmicks and 32 total points of articulation for amazing poses. It's really easy to handle even when it comes changing the posing.

Quite a number of accessories (beam shield, high-energy beam rifle, two beam sabres, four spare hands (though they might seems gorilla huge) and a collection data card) plus built-in weapons. In my opinion, the figure is definitely cool hold the double high-energy beam rifles. The thing that's missing out is that the dragoons ain't removable, otherwise it would be more fun and accurate.

Reasonably good price of around 30 plus Singapore dollars and I managed to get it cheaper as a preloved toy from CSC fleamarket. I'm not sure if it happened to yours as I noticed the chrome on the jointed had started to smudge into the white area.
at January 14, 2013

indeed an impressive figure, bearing in mind that is very old (even vintage) plus is a MS that looks seriously great for me !!!... the articulation is remarkable, specially compared with other similar figures you’ve already published... is a very good option, if not for the model kits, i would choose one of them... =)

Yes indeed, a good action figure from the MSIA toyline. One that is worthy of adding to the collection. Gundam model kit is always the main line and the action figure is just another alternative to lure people to taking a further step to Gunpla-ing eventually. Lolz...

This toy series did have some awesome figures. I am glad to see that he is holding the beam rifle with both hands very well. With the GFF series, this was a bear to do.

For an old action figure the articulation even been able to hold the double rifles nicely is remarkable and this make the post worth well. Always good to keep some signature figures from the past and news one to keep myself updated of the Gundam toy movement.

Rare collection, it's poseable and the accessories is quite complete. But still i have no idea why MSIA discontinued this gundam anymore?

It's nice to see Gundam in various poses especially the poses are convincing :)

>> Om3ga062012
I once heard from a fellow collector's friend that MSIA is made mainly by rubbery material and the surface would turn greasy and eventually disintegrate and Robot Damashii has a lot more resin material hence easier for better sculpt but would not survive drop test. Lolz... Anyway, my humble opinion is that there had been a lot of Gundam MS in MSIA form and it's a time Bandai move on.

>> deSMOnd
Definitely bro, it's motivating to pose this figure cos it's really easy to handle despite only 5". Crisp and nice!

MSIA - I like!!!! they offer more "play value" if compared to the GFF counterparts but the one and only obvious "cons." is not the material but rather the smaller size (smaller than 1/144). Anyway, Bandai don't care coz despite all the complains about size, the MSIA sales is doing well (and I love them somehow). Now the action figure division is handled by the "Bandai Collectors Division" or something like that, and since the past 3 years I can see that they are more focus in producing slightly bigger size mecha figures (the typical Robot Tamashii size) as well as those Chogokin series. I think the last MSIA figures I've known is those from Gundam OO (please correct me if I'm wrong though).

I can't agreed more that Bandai is making their figure bigger and close to 1/144 scale as Robot Damashii. I also noticed that the size of MSIA had been made bigger towards the later stage of production and obviously less rubbery. I also adore GFF introduced more in 1/100 scale, masterpiece standard...