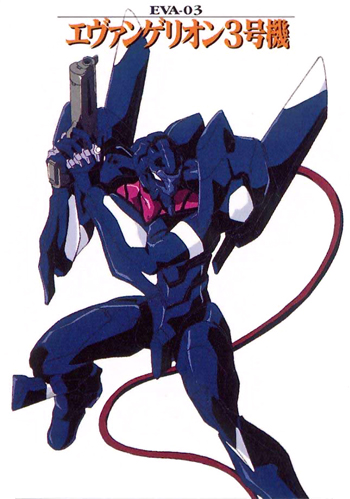 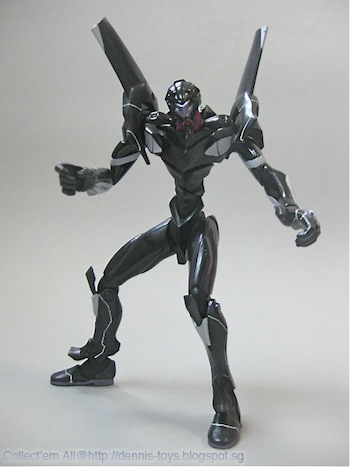 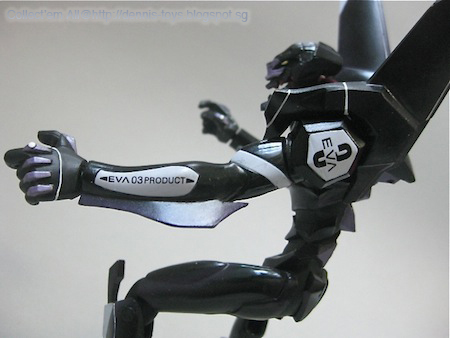 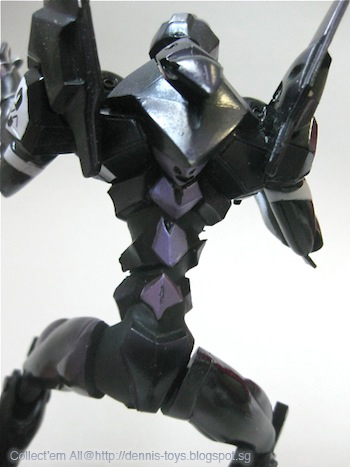 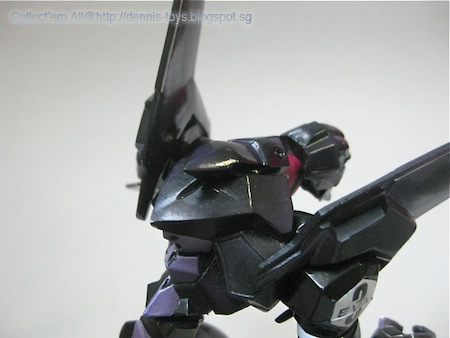 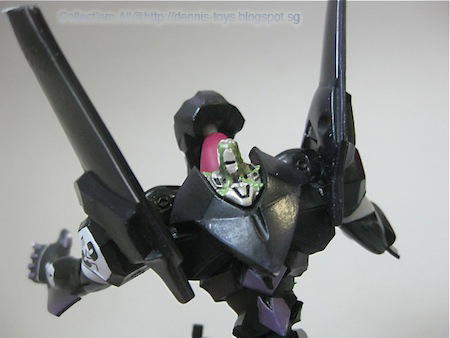 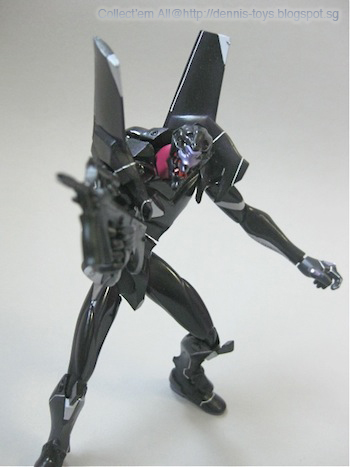 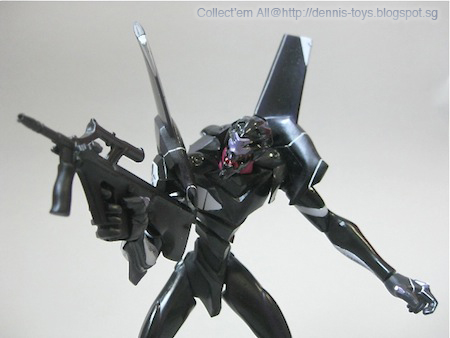 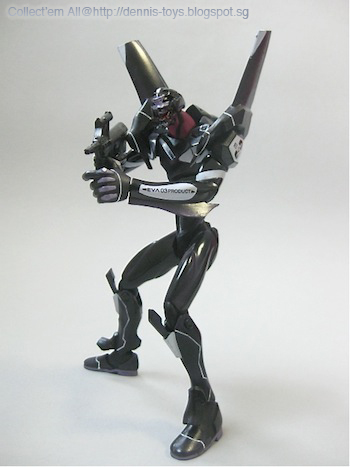 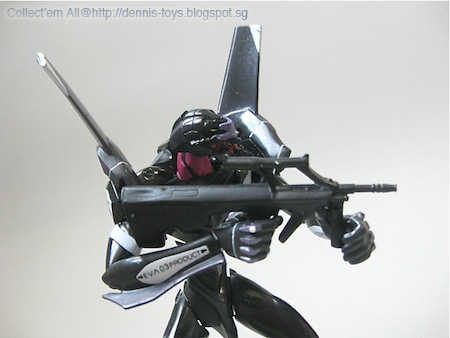 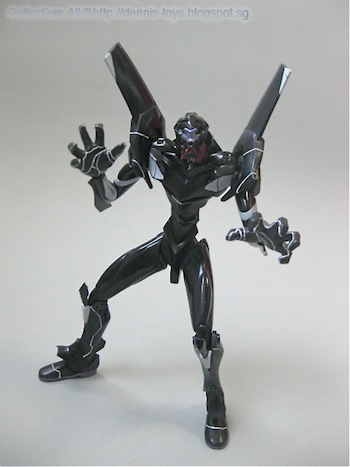 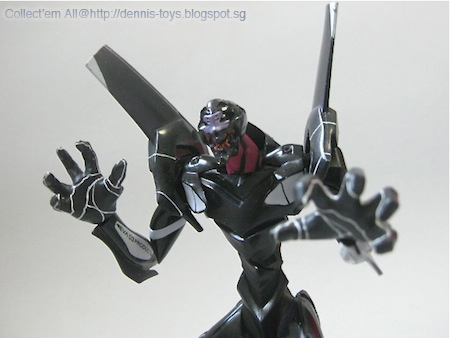 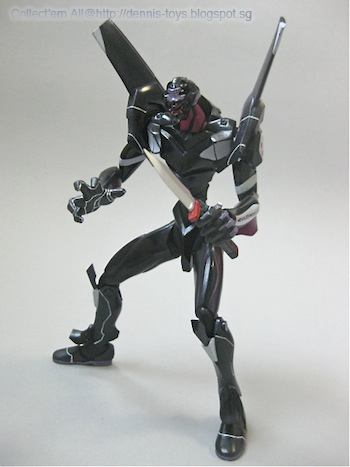 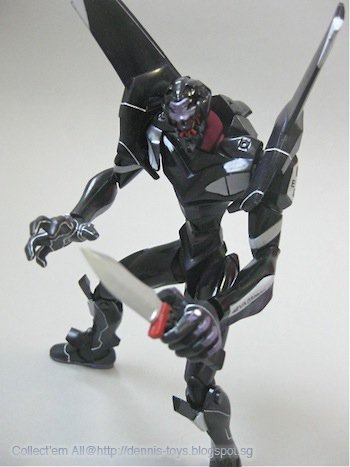 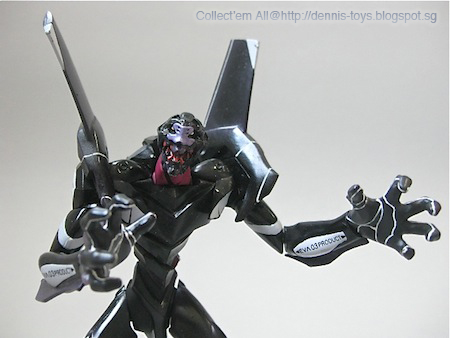 EVA Unit 03 Black is the ill-fated EVA that becomes infected by the Angels, and takes on demonic qualities, which show through in this figure released by Kaiyodo-Xebec in 2001, an action figure line after SEGA’s version and before Revoltech. A nice paint job and fairly articulated (15 joint-points) of EVA 03 figure from the Neon Genesis Evangelion video series features a black paint scheme, a concept by Gainax (Yoshiyuki Sadamoto).

Comes with a selection of weaponry and variant hands, for a multitude of poses! Figure stands over 8 inches high and could be taller if not for the hunch. It has 8 total variant hands for different poses interchangeable, another "Fierce" head included, reversing elbows and a pair of elongated arms for crawling spider pose.

I got mine loose on Ebay and has a broken tab in his hip that can be pressed back into place with no issues. The figure does not really suffer from the hip being broken and could probably be repaired easily. The weapons shown in the pics were not originally manned for EVA-03.
at January 29, 2013

It is sad that these figures of that series had such limited mobility. You had limited movement or posing, but the colors and decals were amazing. It is still cool that you got this added to your collection though!

I got this and not the Revoltech more becos if the size of the figure. But I'm switching to model kit like the LMHG by Bandai which is even bigger/taller. One thing, the paint works on this figure is undeniably good.

Is this a tall figure?

I guess 8" should be the similar height to most regular action figure. Good size on standing display and nice to handle.

the 03 seemed to be a "mass production" EVA since the technology to "manufacture" them were in a mature stage and the humankind thought that the war against the angels would last long...

very good sculpt and paint job, something you can expect from Kaiyodo and the EVA looks pretty fine in black... the corresponding model kit has very good articulation but is more delicate to handle (even more after the painting process), it has better detail as well, the size is 8" but the price is way more expensive, at least in my case, after shipping and taxes... =OOOOO

I believed in EVA case, getting a suitable pilot is more difficult than going mass production. I agree that pricing for this 8" figure by Kaiyodo is a bit on the high side for the details and at that time, there were only limited set before the reissue version in tube packaging.

In fact, I had butter trade this for a EVA-03 LMHG with a friend and even though the model kit is taller, there's a lot of hand painting required.

oh yeah, now that you mentioned, it was really hard to find the correct pilot, but Rei Ayanami, the best qualified pilot were in fact a clone and i remember some scenes where the other clones of Rei are shown... NERVE tried to cover all sides...

on the other hand, am i wrong or you said that you got the LMHG ??? !!!... as you said it has a lot of work to create the correct resemblance, specially in the head, but the detail is still much better than in the Kaiyodo figures... =)

A strong point that you had brought up on those clones of Rei Ayanami. But, isn't Shinji's abilities over any clones NERVE needed to save humanity?

Yup, I do have a few LMHG EVA model kits to replace the action figures. The LMHG EVA units are even taller than 1/100 scale Gundams. LMHG would require more work as the parts are mainly on the primary colours. The stickers provided did really look good on the kit.

Maybe is my low level skill on model kits. I find it difficult to achieve the standard of Kaiyodo figure. I had hand paint some parts and bought Bandai water slide decals for EVA to enhance the appearance.