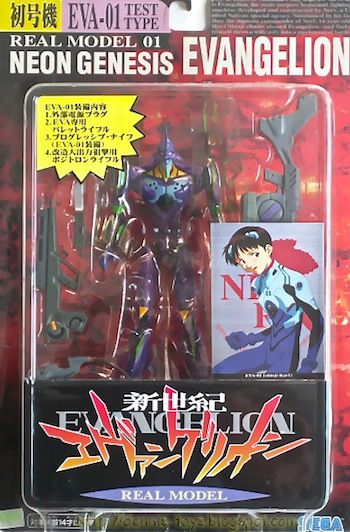 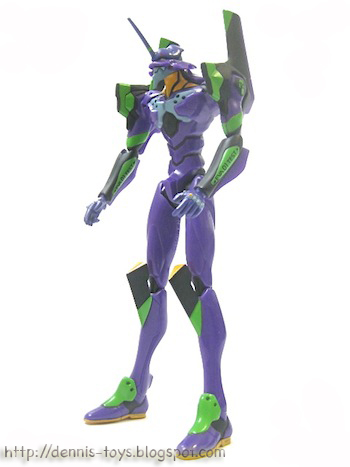 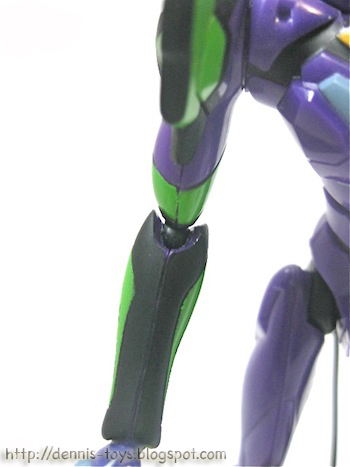 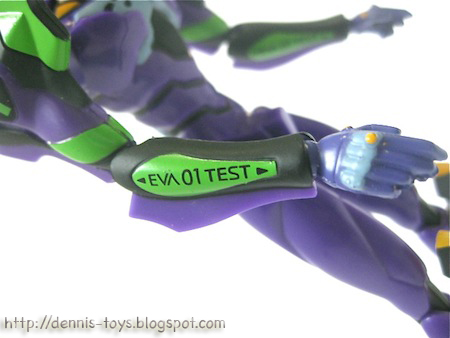 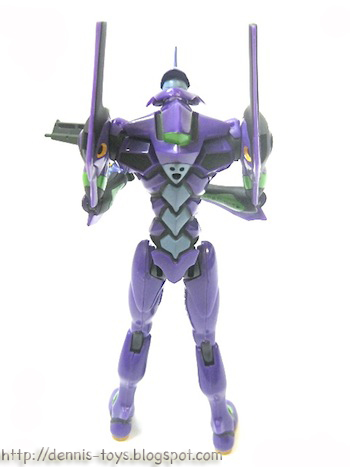 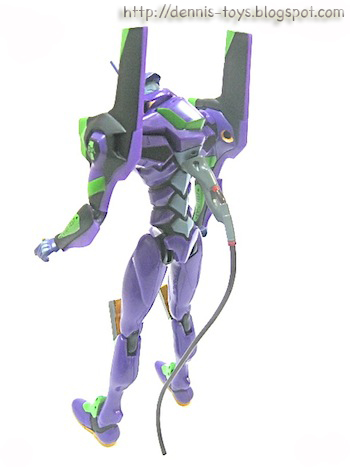 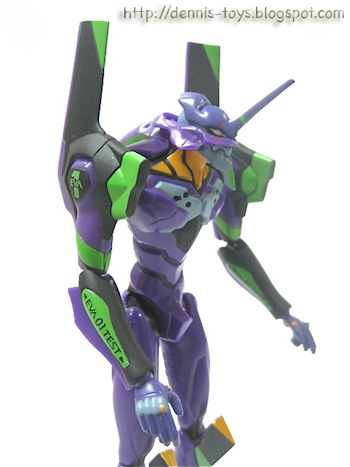 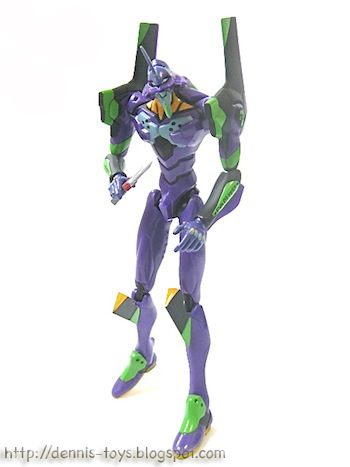 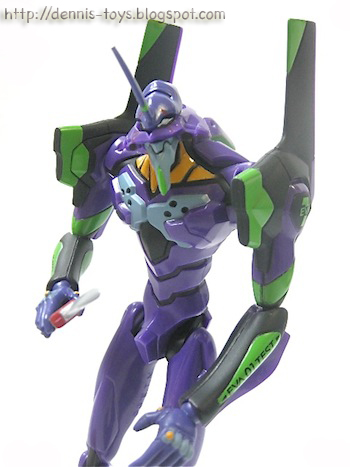 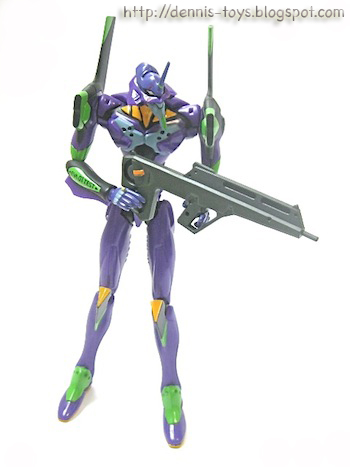 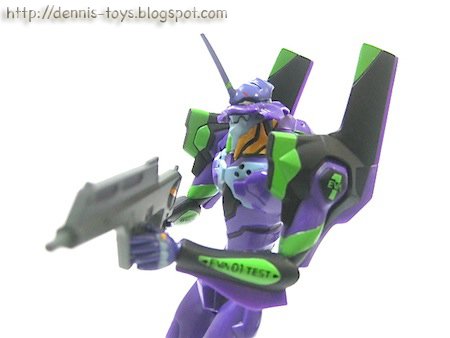 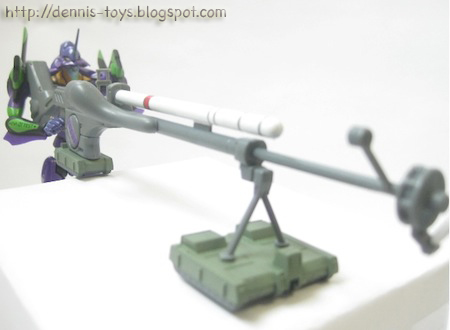 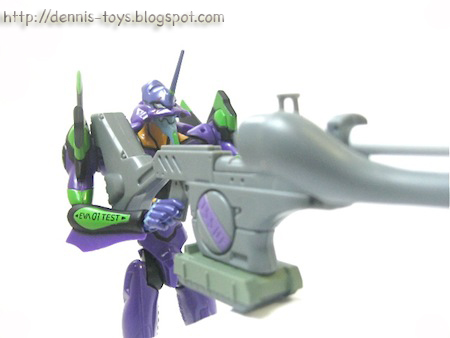 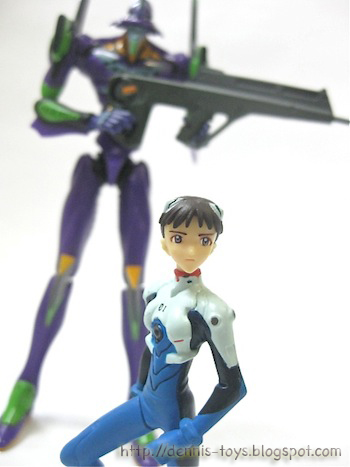 
This is probably the first action figure line of Evangelion, at least to my recollection. The toy was made by SEGA, which I think they were better making console games then. The packaging was typical blister card so you clearly see the actual toy and accessories. The amount of accessories thrown in  provided a good reason for buying the toy and in my opinion had compensated the figure's lack of articulation.

SEGA has also included a card with illustration of the mecha's pilot, Shinji Ikari. The action figure stands approximately 8" (good size for display) with more than decent sculpt and paint job. The elbows were the only parts with ball joints whereas other limb joints only allowed minimum movement, back and forth. Most of the poses were just standing and kind of rigid. Still, with some imagination, this action figure could produce relatively good poses.
at September 23, 2012

THe mecha's pilot, Shinji Ikari in the last photo of this pose is not included right? Cool SEGA. Hope they can produce good games and toys in time to come...

You are so right bro! The figure of Shinji was not included and I used it only for photo effect. I gotten put an advisory to it to prevent misleading. Ha! Ha! SEGA has divert their a business a lot to toy prizes these days and I hope they can make a good come back on games too!

I have this one! Remember buying it years and years ago when my fascination with Eva began (my age started with the digit "1" then, now its "3". Damn Im OLD.) I bought all 3 from this series so i have Asuka's 02 and Rei's 00 as well.

Indeed, this toy is so damn long ago however the figure is still so crisp and that the anime is still so fresh that Ayanami is around on poster as ambassador of Japan tourism. On the other hand, we have been inducted to uncle's hall of unfame. Ha! Ha! So cool that you are still having these masterpieces of SEGA.

Bro, your pictures are very bright...

Hope they are not overly bright that they blinded you. Lolz. I brightened the pics to show the contract and toys with dark color tone is a lot easier to do it on white manjong paper.

this figure looks pretty much like some i had by Kaiyodo, even the level of articulation is similar, but they have more accessories and a paint job with metallic finish... this mecha design is very "humanoid" and the reason, if i’m not wrong, is that it’s indeed an armor for a clone of an angel... this concept is very innovative and a bit disturbing as well... =O

WOW - that brings back memories. I used to have these back in the day. I think they were the first figures I can remember from the series.

I liked the fact that you could just slide the backer card out and save the packaging.

Those by Kaiyodo was more advance since they made at a later stage. What you had mentioned about EVA units are very right and with a lot of understanding to the concept as a whole. Somehow, the female characters gained more attention by fans than the mecha.

>> bluedrakon
The Japanese are very good when it comes to packaging and the sliding card backing indeed is ingenious way to maintain the goodness of the toy from inside out.

Thanx! My kiddos have 3 sets of Thomas and Friends railway track playsets already.