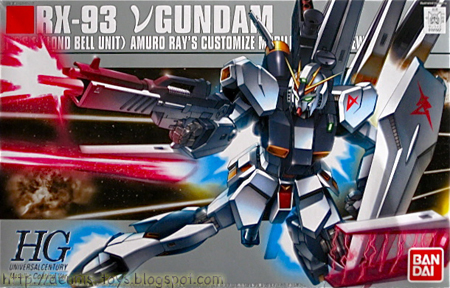 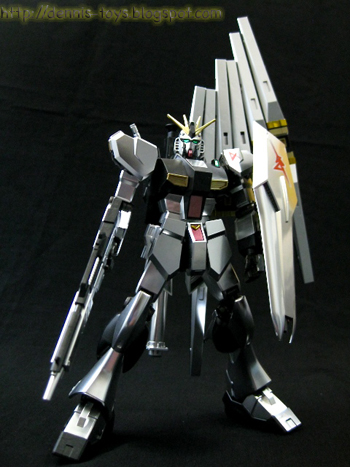 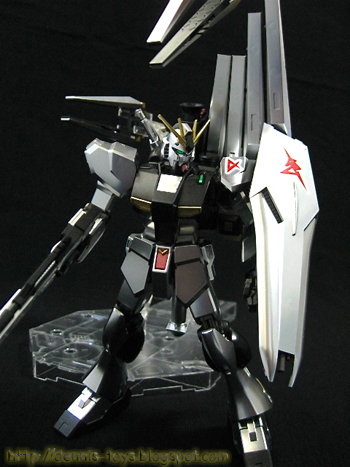 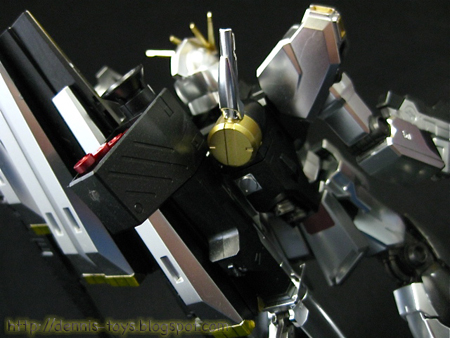 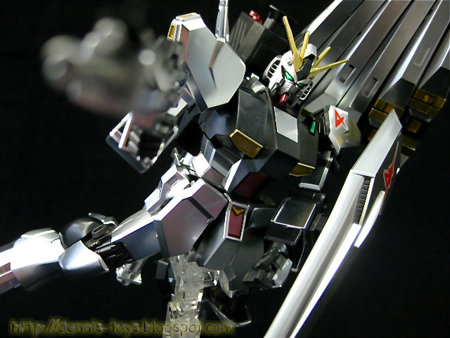 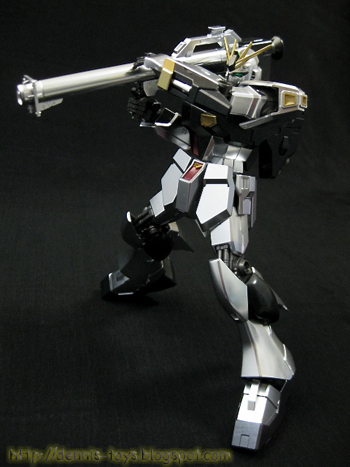 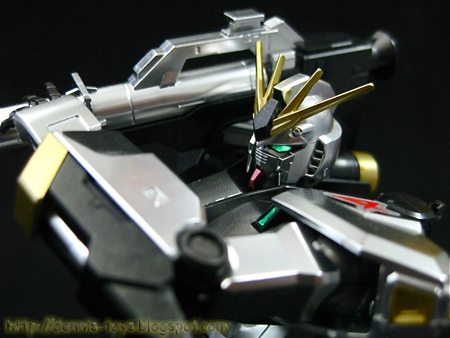 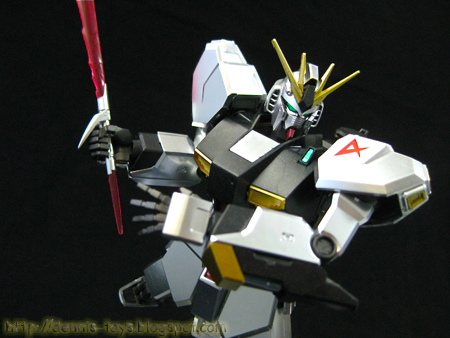 You should see the childlike expression of Alfred when he showed me this HG Hi Gundam (Metallic Coating Version). It's priceless! Alfred recently gotten himself an awesome Gunpla cutter which he claimed would boost his Gunpla Meister level by at least 5. Lol.....Hence it gave him the drive to build this kit. Alfred had lent me his cutter and I agreed that the money was well invested. I too should upgrade my level. Hee! Hee! In actual fact, the cutter generates less sprue thus shortened the time needed for filing.

So much on the cutter, let's focus on the kit. It's no doubt Hi Nu Gundam is one of Alfred's favourite and definitely one of those stronger Gundams in U.C timeline, mainly contributed by those mind-controlled fin funnels. Its other weapons include head vulcans, beam saber, beam rifle and hyper bazooka. Even there's a lot of weapons, they are neatly arranged at the rear of the MS. Since the kit itself is metallic coated, there isn't much touch up required apart from applying those iconic Amuro Ray logo decals. Even though the kit is in 1/144 scale, Hi Nu Gundam towered over almost kits of the same scale. Most other 1/144 only reached Hi Nu Gundam's shoulder. This metallic coating version makes good memoir and certainly a tribute to Amuro Ray.
at February 20, 2011

Is this a limited edition? Great for lazy and poor painter like me. LOL

I'm not really into chrome version but I must agree that it takes less effort on limited edition like this. The cost of this exceeded the MG class.

Shiny - pretty - Precious, must have my Precious Gundam - yesssss

Oh yes, I must say I'm pretty impressed while taking pics of this beauty.

Wow, that's some awesome pictures you have made there. I particularly love that 3rd shot where u made the funnels seem like they are floating around. Brilliant! Do hold on to my cutter, as I won't be around to use it the next week when I'm away...It certainly raised my Gunpla building stats from lvl 1 to lvl 6 :)

I'm glad that you like the pics bro and I had great fun taking pics of your precious kit. The 3rd pic was done with the Gunpla stand as well as my steady hand. Ha! Ha! Thx for the loan of the cutter. I will make good use of it before your return.

These kits are very good looking but the price just puts lots of ppl off. haha! there are plenty of these around in msia as many are put of due to its price. And there are few forumers offering it on the cheap too!

i was wondering if this kit is taller than my HG Gundam Zeta Extra Finish version ??? this gundam has a great design & the extra finish gives it extra taste, not to mention the "ready for display" feature =D

I saw it at the mall for SGD$100+ and was put off by the price. Later, a friend who is also a Gundam fan alerted me to the fact that the kit is on sale at an offer on an online store, SGD$60+ (including shipping) and I wasted no time in ordering it.

The metallic version Gundam is nice..Get one for yourself, Dennis :)

>> sl619
The price could be an issue. Nevertheless, the quality speaks and it's always nice to wait and catch the best deal. Maybe you could try get it from Rakuten, they charge by Yen and buying in bulk could save on shipping.

>> on_o
Bro, you are one of those lucky ones that managed to seize the opportunity.

Whoa, that pose with Nu holding the bazooka is cool. :D nice one.

I guess it's the kits that inspired me to spend more time and effort taking the pics. Thx bro!