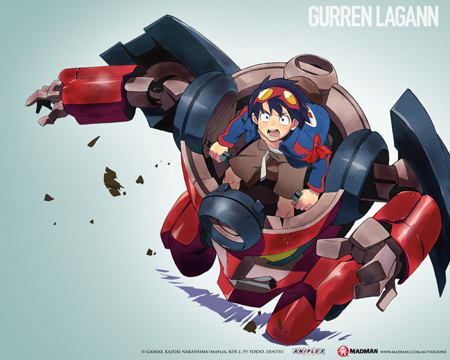 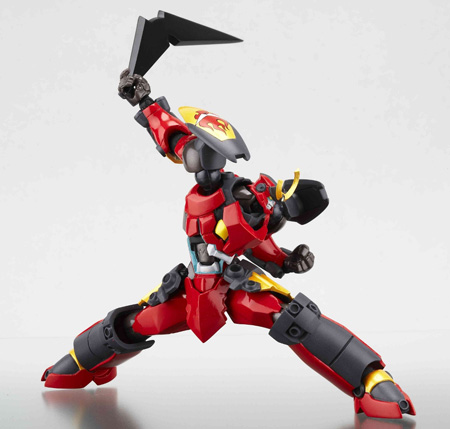 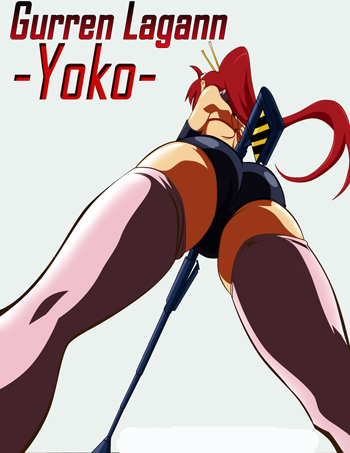 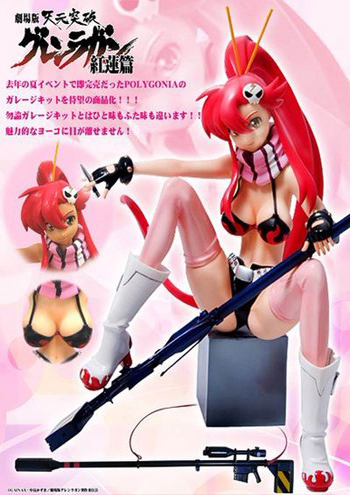 I happened to tune in to Animax the other day and was captivated for an entire hour watching episode 14 and 15 of Gurren Lagann. The showdown between Beastmen's Human Eradication Army & human was amazing, not to mention the cannon shots, missile launching and powerful drilling attacking (indeed very Super Robo style). The characters and mecha design were adorable (especially those piloted by ‘Black sibling’. The fight scenes was so intense then I thought it was the finale only to know that it’s a 27 episodes anime after searching for more information online. In that 2 episodes which I had watched, I managed to catch a few scenes of Yoko Littner who had featured often on many blogs. Somehow, her role wasn’t very significant in these 2 episodes so still I don’t quite understand her popularity. Hmmmmmm…….
at January 09, 2011

Given a sexy good looking female with good "asset" in bikini already a good hint of the obvious popularity. :)

Gurren Lagann is officially my FAV anime currently!! XD
Really love the mecha design and ridiculous mecha combinations and their version of "Gattai!!" not to mention Yoko too. ^^
The Revoltech line is the only line of toys to have all the main mechas in this anime though but its suites them so well with the ability of dynamic poses that is so true to gurren lagann!

Bro, I could tell from the way you describe the anime to me. I must admit that this anime caught my attention in such a short time. I was looking for the Revoltech at fleamarket last Sunday to see how the actual toy look like. It seems difficult to find one nowadays. Do you have the toys?

HAHA! looks like u've caught me. i actually hv 6 revoltech mechas from gurren lagann. just left 2 more to complete its collection.^^
they just reissued 5 of them, 2 last month and 3 more this month. I think u cud get them if ur local toys stores restock them.

ahhh Gurren !!!??? i’ve not seen that series till now... i guess Yoko has at least a pair of good reasons for her popularity LOL XXXXX !!!... the only figure of this series i would like to own is the Tenga Toppa Gurren Lagann Composite Ver.Ka... anything else ??? yes... YOKO, YOKO, YOKO ♥♥♥♥♥

One of the most EPIC mecha anime ever, i watch it and get goosebumps, its that good!
Recently watched the second movie and found myself cheering at a TV screen, never done that before except with cricket.

>> sl619
It's hard to resist the Revoltech mechas when you have sunken so deep. Lol...

>> chrismandesign
Ha! Ha! Now I'm confused if you would like to Tenga Toppa Gurren Lagann or Yoko. Beauty & the mecha!!!

>> Ant Sized Man
The series is amazing good and it somehow takes me out of the world of Macross & Gundam for a while. I guess exposure to other mechas anime can be a good thing too!

You have to catch the rest and start at the beginning is a definite.

One of my fav's of all time!

With high recommendation from all you guys, I will certainly watch it with a proper beginning. Cheers!

Certainly rocks bro. I even brought my food from the kitchen and have my dinner while watching. So much for set example for my kids. Ha! Ha!

Gurren Lagann rocks...
I had watch it two times...
I love the Mecha...
It's different from others...