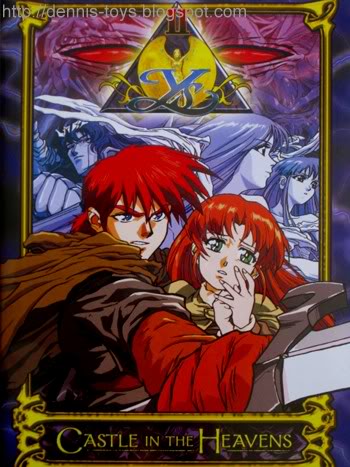 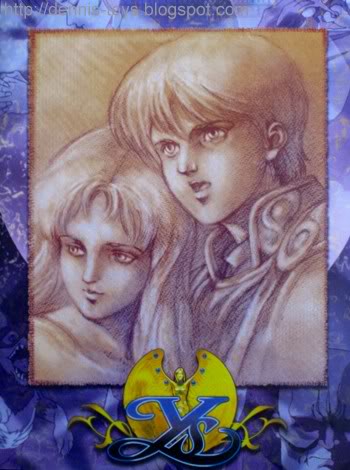 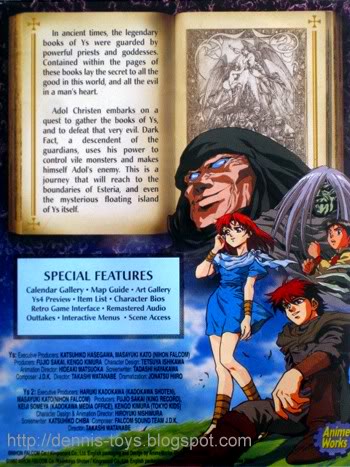 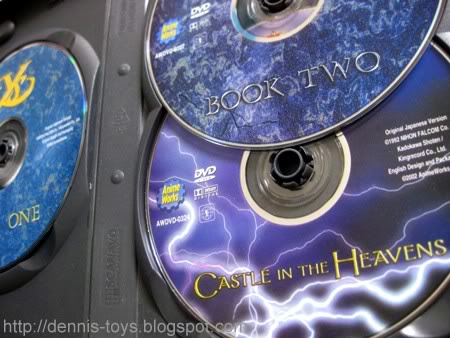 This is an anime derived from its successful RPG game series. I have not played any of its games but found interest in the anime while searching for knight fantasy anime. The story main focus is on a young hero called Adol Christine who was on his quest or should I say fulfilling his destiny to save the land of Esteria as well as the ancient land of Ys. He had to collect the six books of Ys with the help of two beautiful goddesses as well asthe descendants of the six keepers of those books.

The DVD boxset comes complete with 2 DVD but most importantly, this is one of those very few knight fantasy anime with complete ending. The old style of anime drawing from the start ain't very appealing but after it reached the second part, you will see a drastic improvement to the drawing.

Each time I watched an anime, I always have the urged of getting the toy so naturally I was hoping I could buy Ys trading figures that was released in 2005. Unfortunately, all available sources seem to be out of stock so my bubble had been burst.
at May 23, 2010

Bro. I guess it applies to all of us that we will normally try to get the toys of the movie or animation we like :)

Same sentiment bro! Too bad it's hard to obtain any from this anime!

I never complete the game before. LOL

I used to play RPG but eventually switched to strategy game.

i dunno, but for me RPG & strategy games r the same thing with different name... i mean, Warcraft is classified as RPG but u need a lot of strategy to develop a character & when u r developing an strategy indeed u decide to play a role, ur own way to play the game... uhmmm the animation on the video seems really good for me, so i guess it belongs to the 2nd part... as always, the original boxset of a movie or an anime is a great surprise & a sort of gift for ur eyes... =D

RPG to me is more of moving the character around on the map and boom boom you ran into enemies. For strategy game, characters movement are limited by the number of tiles or grids they can move, just like chess and attacking at a distance.

Yeah, I am definitely a fan of SRPG (Strategy RPG Genre). Currently I am playing Disgaea 2 on my PSP, one of a few SRPG that provides a bit of a challenge.

So how would you rate Ys? If is good. I might give it a shot.

I would rate the anime 2.5 over 5 cos of the typical storyline. Record of Lodoss War to me is still the best knight fantasy anime.