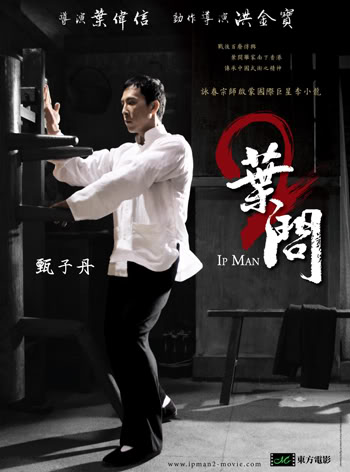 It's movie marathon for me today having to watch Ironman 2 and Ip Man 2 back to back. Can't really compare which is better cos they are both such great movies.

The story of Ip Man continues after his escape from Japanese army during WWII. Ip Man's pride and dignity as a martial artist remains strong despite continuous hardships in his pursuit to pass down the spirit of Yong Chuan (a form of Chinese martial art) and the grace behaviour of a true martial artist.

There were a few unspoken humors in the movie and alike its part one, this sequel has also got some really touching moments. I have enjoyed the fighting scenes directed and acted by Sammo Hung. Donnie Yen had also put his best before he drew the curtain on acting such movie.

oh man... reading up on your blog makes me into HK movies again. LOL.

Oh actually I have a story to tell here..

My mom who is in her mid 60s, went to a chinese video store. The clerk there try to sell my mom a movie with Donnie in it. My mom told the clerk that she don't like Donnie. Then behind her a tall man asked her rudely, "Why do you hate Donnie!?".

My mom got scared, and just say "Oh I don't like fighting movies.", but what she really in her mind was that she didn't like how Donnie looks, she doesn't like his nose. LOL

Then the tall man introduced himself as Donnie's elder during their time as apprentice learning kung-fu. And he told my mom tht Donnie is a good guy, but just a bit cocky at time.

WHen my mom told me this story, I laughed so hard. My mom is adorable.

this movie seems amazing too... i doubt that it would ever projects here, but myb i can get it through "undergroud evil methods" kajkajkajkjakjkajkajkajka

G.G. with all my respect: ur mom has incredible stories !!! ;D i guess all moms hav tons of amusing anecdotes, mine too =D

The plot is still ok but actions still were great and very realistic indeed. I prefer the story line in the first one :)

>> G.G
The story from your mum is really interest and my wife feels the same too. Thx for sharing.

>> chrismandesign
Must watch it bro, you will not waste you time with those fighting scenes.

>> deSMOnd
I feel the same too. The sequel storyline is weaker but it still packed with lotz of action. Somehow it didn't impact me like the scene Ip Man fought 10 karate expert in part 1.

I'd just bought the first part to Ip Man yesterday, will watch it sometime next week. =)

Did you know that I like the part one so much that I watched it twice at cinema. I look forward to your views on the movie.