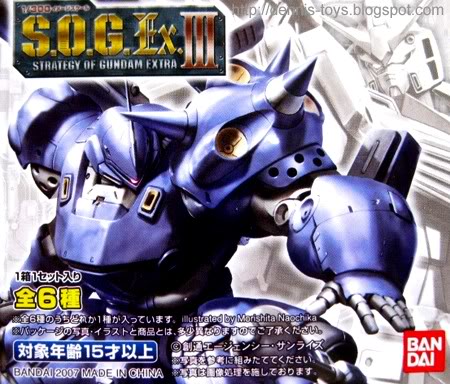 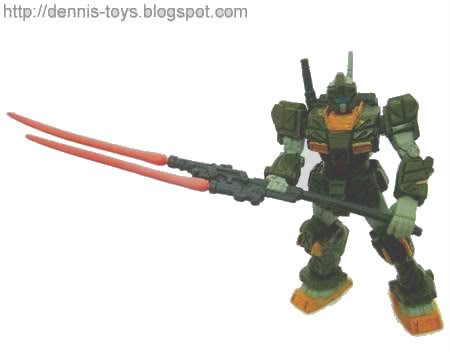 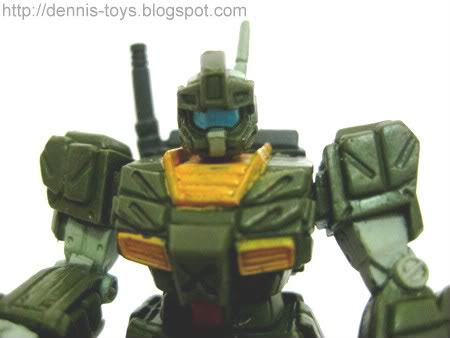 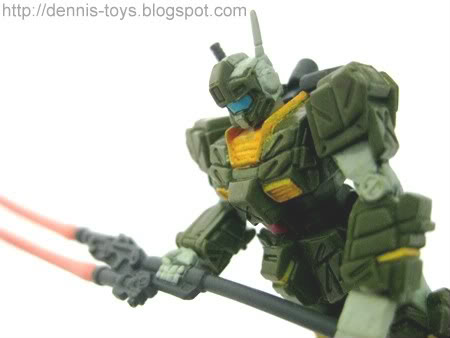 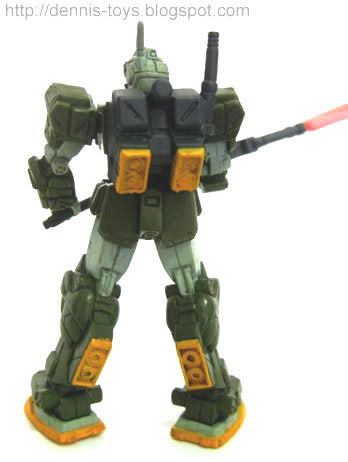 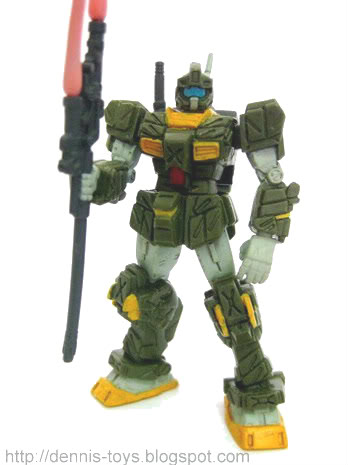 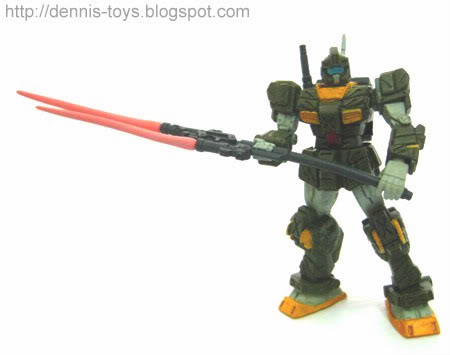 This GM was featured in PS3 game titled Mobile Suit Gundam: Crossfire. Review says that GM striker kicks ass in the game due to its balanced, fast with excellent range, devastating beam spear, with good defense

More of a variant of the Powered GM, GM Striker has this unique original weapon of a long-shafted twin beam spear/ lance, and it used it pretty well in the game so I presumed it’s a mobile suit of close-range attack.

This 1/300 scale GM Striker stands about 8 cm and it’s from S.O.G (Strategy of Gundam) Extra III (series 3). It comes in a pair with Zaku I Sniper which I had blogged about previously.

oho... i like that u dun really mind bout toys price when u want to own one, for u is the same an expensive toy than a cheap toy... good attitude !!! uhmmm i like the bulky armor of this one & the colour scheme & OFC the twin beam spear is singular actually...

P.D. i’m sorry cuz i’ll not be able to publish ur gift for an undefined time, since i have no camera right now, but i’ll do, for sure... i know i already tell u this but THX again pal =D

Oh yes, I buy toy based on my personal liking and it doesn't matter if it's costly or cheap. Most importantly, toy value to me a lot. There's no hurry to publish my gift really. Sorry to hear that you have no camera now. I hope it's not broken.

one of the coolest collector. hohoho

I am crazy for anything GM.. and the GM Striker is no exception. Just by glancing at it, it reminds me of my newly finished Jegan. LOL

GM Striker is one of my potential future build in HG 1/144 format.

I am crazy for anything GM.. and the GM Striker is no exception. Just by glancing at it, it reminds me of my newly finished Jegan. LOL

GM Striker is one of my potential future build in HG 1/144 format.

>> Asrul
Blogging allows me to meet cool collector like you too! Thank you for the kind words.

>> G.G
I'm sure you will build one very awesome GM Striker just like you HGUC Stark Jegan. BTW, there's a HG GM Striker on Ebay selling only @ 6 USD when I browsed the net yesterday. Good buy! Hee! Hee!

ps: No prob to the double posts! Just glad that you drop by!

Very true bro! It appears very unique to me too like deathscythe.

I know this guy has a plamo ver,or was it a B club conversion,but anyway the flaw looks almost like its left there intentionally,like battle damage or terrain.

one of the coolest GM I know minus that horrible paint scheme, green and yellow...blehh

I guess most of these GM started as magazine concepts, conversion kits or resin before they are wide known. Maybe the flaws look less obvious due to its battle damaged look.

I buy stuff as well depending on likes and such.

The double lance however it awesome when watching that. My son kept asking me where he could get it - lol

It is for close range, you can see that from the thickness of the armor, man. That's expecting to get hit and not feelin' it XD

@Bluedrakon
The HGUC 1/144 Gm Striker will be re-stocked on May by Bandai. :D In case you're interested.

>> Bluedrakon
I bought it on Ebay from a Hong Kong seller. Anyway, I saw one on Ebay Singapore recent and I think it's still there. Get the kits, it's better.

>> Kaze Tora
Man! You are so right in explaining the thickness of the armor. Simple reason to not getting the kits lazy + no time + no talent = not getting. Ha! Ha!